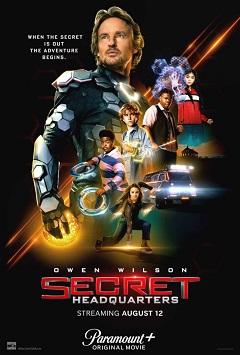 Thank you Paramount for providing us access to a digital screener to review!

Secret Headquarters begins with a picture-perfect (Kincaid) family of three on a camping trip together. Just as the mother is about to play some acoustic guitar by the campfire, there’s an explosion in the night sky and a ship comes tumbling down a couple of miles away from their location. Since they’re in the middle of nowhere, the father (Owen Wilson), drives down to the crash site to offer assistance.

Upon arriving at the crash site, Mr. Kincaid finds a wounded pilot near the wreckage of a U.F.O. Near the alien ship is a hovering orb that rejects the military officer as its new owner, but accepts Mr. Kincaid as becoming its new guardian.

This alien artifact allows its owner to see futuristic events and produces energy far beyond any means available on Earth. The orb also creates structures and useful gadgets surpassing anything humanity can presently do. With this new technology, Mr. Kincaid becomes a superhero named The Guard who travels around the world at supersonic speed to stop crime. With great superpowers comes great sacrifices. The time commitment of saving the world from crime costs Mr. Kincaid his family as his wife files for divorce and their son hardly has a relationship with him anymore because of all of his “business trips”.

The son, Charlie Kincaid, thinks poorly of his father, but admires the superhero The Guard. Little does he know that they’re one in the same until Charlie and his friends accidentally discover his dad’s secret headquarters. Unfortunately, shortly after Charlie and his friends find the hideout, heavily armed mercenaries infiltrate it in an attempt to steal the orb as a source of incredible power and technology. The teenagers know that the orb is in good hands with Charlie’s dad and put their lives on the line to protect the orb from the greedy soldiers.

There are some light-hearted moments between gunshots. There’s budding romance which seems to cause Charlie to burp anytime he gets nervous around a girl that he likes. The humor is pretty tame and the violence isn’t too bloody, but there are some deaths as the mercenaries are not playing around. Language is present with some taking of the Lord’s name in vain and the word hell is not used in its Biblical context. On the romance front, some kissing is shown.

If you’re looking for some light-hearted superhero action outside of the MCU (Marvel Cinematic Universe), Secret Headquarters is worth checking out. The film earns its PG rating due to violence, language, and crude humor. This film is premiering on August 12th and will be exclusively available on Paramount+. Subscriptions for Paramount+ start at $4.99 a month and there’s a free trial available if you’re unsure.