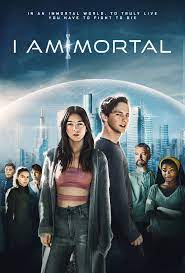 Thank you RLJE Films for sending us a Blu-ray to review!

I Am Mortal takes place 213 years into the future in the year 2235. According to this film, mankind pretty much dresses the same way (in the 2020s) and occasionally reads paperback books still. It’s assumed that humanity has been through some devastating warfare as the main city is in a domed environment and much of the Earth’s surface is barren. The main character, Logos, is a terraforming engineer trying to restore the land to its pre-devastated state.

Humanity’s leader refers to himself as “The Pilot” and he believes that God is a fantasy and that free will is undesirable. His gods are science and technology and he has discovered a way to modify people’s genes and wipes their memory if they defy his orders. In order to fit into The Pilot’s society, people must take a daily medication called “maintenance” that keeps them compliant and suppresses their critical thinking abilities.

When The Pilot deems people to be at their peak, he grants them the opportunity to become immortal in exchange for their service and compliance. Logos is days away from his gift of immortality, but he’s not looking forward to it as much as he thinks he should be. Sensing Logos’ hesitation, a group of rebels contact him to let him know that he’s not alone. The resistance group meets in an abandoned church and wants to tamper with the maintenance medication to let humanity know that God has a purpose for them and that they are intended to die in order to truly live.

While this movie isn’t advertised as being Christian, there are many Christian themes present. This film is a bit low-budget and the story and characters are okay. Just when the story was starting to get interesting, the movie ends on a cliffhanger. I’ve seen better movies, and I’ve seen worse. I’d say this one is worth a rental at least. I’ve seen it for less than $15 on Amazon if you’re interested in buying it.

From Hero to Villain — Here Are 3 of the Most Love...
How to Choose a Gamer Computer?