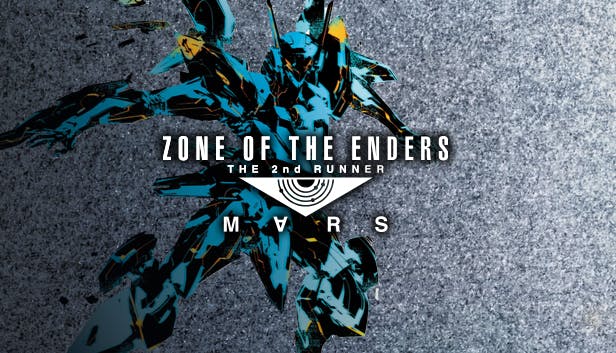 Thank you Konami for sending us this game to review!

I played very few console games in the PlayStation 2 era, as I was mostly into PC gaming at that time. I got back into consoles a bit later, and I did end up getting both a PS2 and a GameCube, but my PS2 library is rather limited, and I never got into the more obscure titles. I had heard from one of my brothers about this really cool series called Zone of the Enders, and I kept it in the back of my mind as one to check out if I ever got the chance. Sadly, I never did, until now, with the latest PC/PS4 remaster. Being given this opportunity, I made sure to take it!

I have long loved both the Western and the Japanese approaches to giant robots/mecha. I have equal love and affection for Western classics like MechWarrior and BattleTech, as well as Japanese classics like Macross and Gundam. This game, as well as the cutscenes, are so incredibly anime and Japanese that they should be proud. This feels like it could be right out of an anime, and in some ways it is – and I love it.

Zone of the Enders: The 2nd Runner starts off with an extremely long cutscene. It’s fully animated and looks great, but it’s quite long. Once this completes, you finally do see the main menu. It’s from here that you can choose to switch to VR mode, which can be a bit frustrating, since starting the game from the SteamVR menu doesn’t always do what you want it to. If you are lucky, you will see the game in the desktop theater mode on your headset, which you can then control and so on. I was not so lucky; I had to get past the intro on my desktop, and have one of my kids enter VR mode for me once I got the headset on. Once I was in, it worked great. (Non-VR mode had no obvious problems.)

The game starts when Dingo, who is piloting a mining mech, stumbles upon a strange package that happens to have the Orbital Frame (what they call combat-ready mechs in this universe) Jehuty inside. As (bad) luck would have it, another group shows up and wants to take it from him almost immediately, destroying his mining mech in the process. Not being one to let another just take what he found, he fights back, and keeps it. Of course, that is far from the end of the story. He pursues those who he believes to be bad actors, and gets captured, which then leads to him getting shot – and almost killed, except for the quick work of another who hopes to use his skill in Jehuty to further another goal. 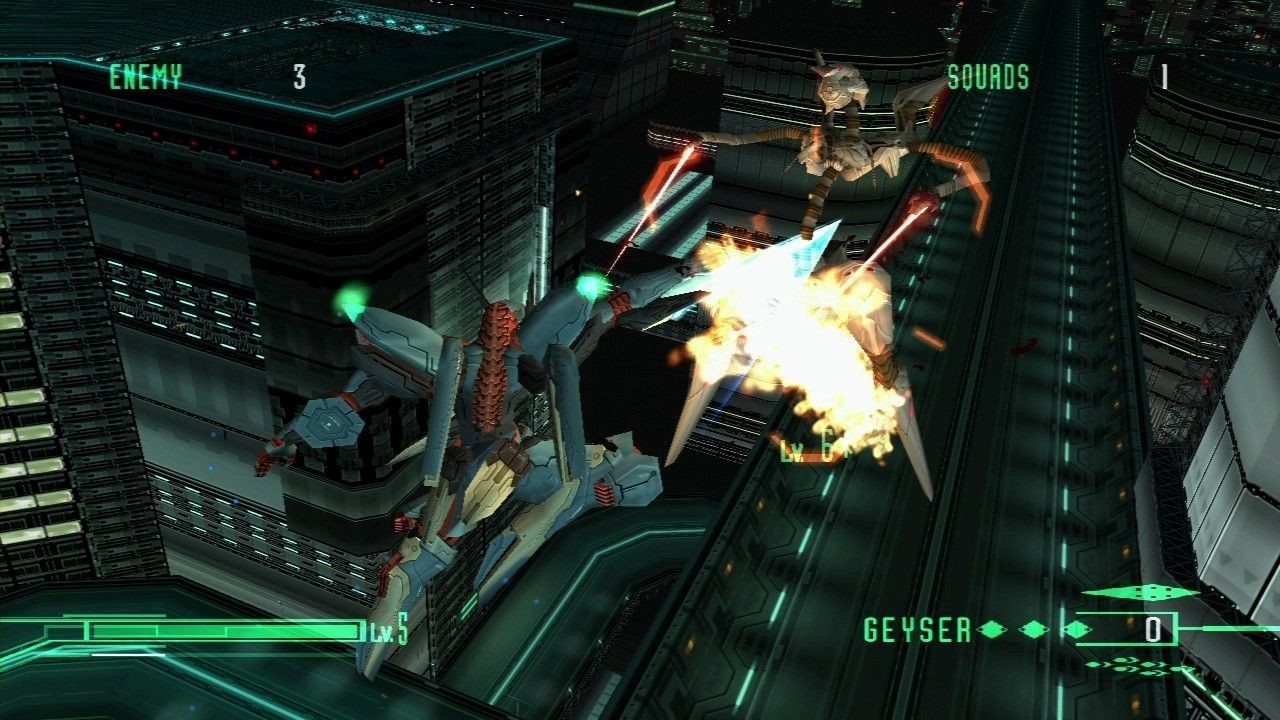 Strong Points: Really fun gameplay with giant robots; VR mode works fairly well once you get it working; looks pretty good for a remaster; lots of fun
Weak Points: VR mode is a pain to access, as it’s not a ‘normal’ Steam VR title, and doesn’t support motion controls; transitions between cutscenes and the in-game action are strange in VR mode; NO AUTOSAVES!!!
Moral Warnings: Blood and death present, as you and your enemies fight for keeps; minor curse words, like ‘d*mn’ and ‘h*ll’; ESRB notes mild suggestive themes, with a billboard of models wearing bikinis, but I did not catch that

The story takes several twists and turns, and is voice acted with anime cutscenes the entire time. It’s reasonably high quality, though there is some evidence that this was clearly localized way back in 2003, as the general quality of the translation has some ‘huh?’ moments (and things have greatly improved since then). Despite those moments, I was generally able to follow along pretty well, and enjoyed what I played.

The action is a lot of fun, as you are in Jehuty, who can shoot both distant shots as well as move in for in-their-face melee action. Enemies die more quickly up close, but you can also do a lot of damage if you can hit them with a charged shot, which hits hard, but leaves you very vulnerable, as you have to sit still while powering up the shot. A single stray bullet interrupts the charging, also. There are also some alternate weapons, or the very powerful grab. Most of the weapons are situational rather than powerful (though there are exceptions), and use sub energy to use, as do your charged shots. Later sub weapons are very powerful, though. I usually stuck with grab, as you can literally pick up weaker enemies, and throw them into other ones, quickly clearing out an area. I found mastering the grab critical in doing well.

The graphics are a stylized 3D, third-person action game, where you see your Orbital Frame (OF) in front of you, as well as your enemies, and you can see what actions it is taking in response to your button presses. The graphics themselves look very nice, though far from cutting edge. They have style, which is more than enough.

In VR, the cockpit view is really neat. You sit in your seat, and look out of the window of Jehuty. You can see much of what’s around you, and if you look back, you see the seat you are in. I highly recommend having a comfortable chair when you are piloting in VR. In order to compensate for the missing third-person view, they did something pretty interesting. In the lower right of your view, you can see a mini version of yourself, that looks like a holographic projection, along with the location rings, health and energy bars, and all of the stuff you would otherwise be missing in cockpit view alone. The Vive’s display is not quite as clear as my 1440p IPS monitor, so you do lose some detail, but I was amazed with how much fun it is to pilot a mech in VR. Since you don’t have motion controls, some immersion is lost – but it’s still really fun to play. 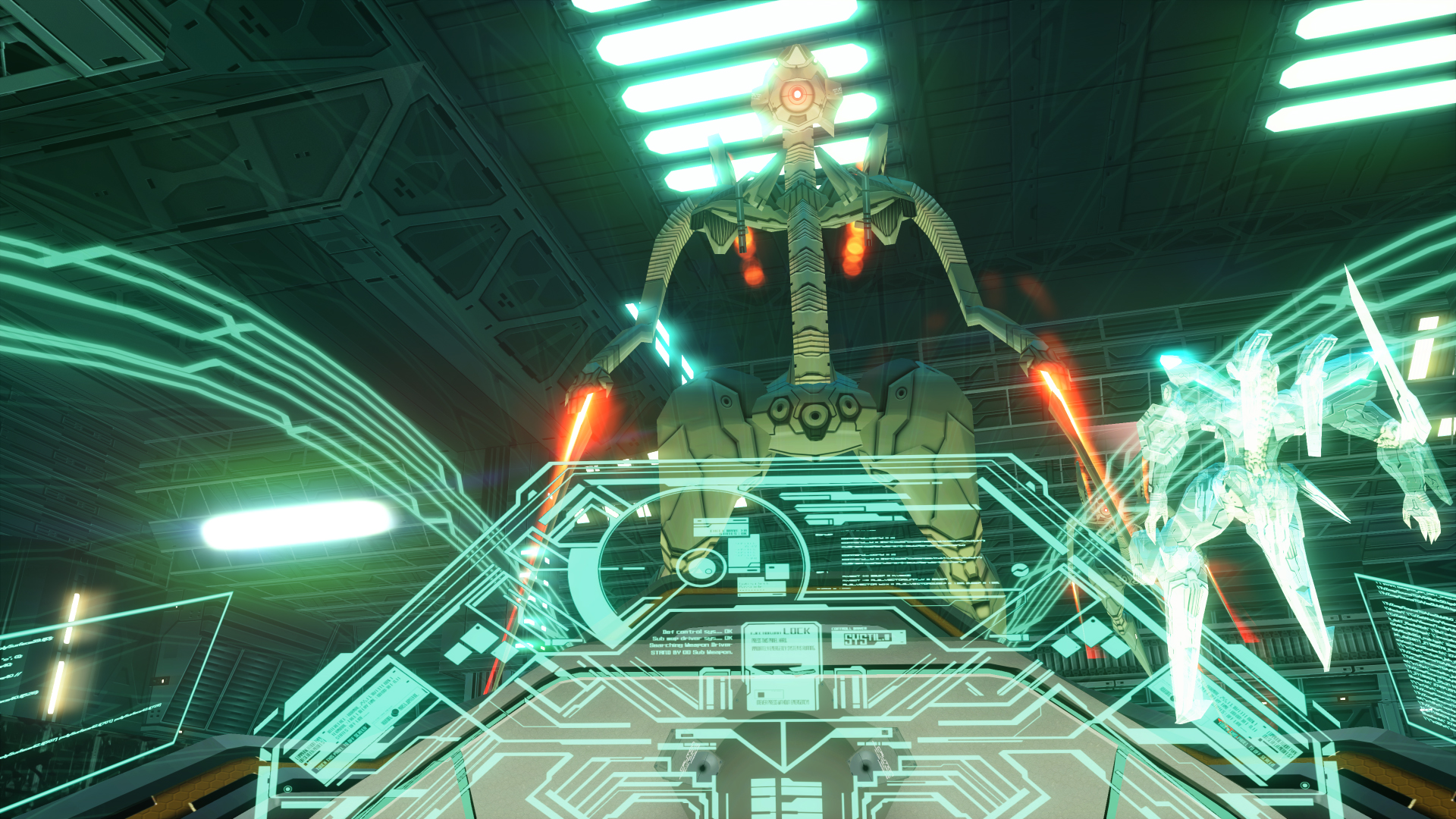 The downside to playing in VR is that the cutscenes, which are many, are rendered in a rectangular theater-like view, while being in the cockpit is a first-person view. It works, if you expect it, but it is a bit strange at first. It’s probably the biggest evidence that the game was a retrofit, rather than a full-on conversion. Nevertheless, I’m glad they added it – it’s still fun to get to watch baddies get blasted in VR, even though I don’t (yet) own a VR headset that is as clear as my monitors. That, and few VR games are more than little tech demos, so it’s nice to have the option to play a full game this way. There is also a very easy mode designed specifically for VR, since it takes more concentration to fight enemies with a large health bar in VR. Thankfully, I had no motion sickness issues whatsoever in VR in this title.

My biggest complaint, and the only reason I have not completed this game yet, is because of an oversight on my part. You see, I have an admission to make: I have gotten used to modern game design, with fancy cloud saves, and autosaves. The last time I played this game, I got a bit past the half-way point – I put in a good four to five hours, and got past some really tough bosses. Then, I went to quit. I reloaded an hour later, and discovered...

That’s right, I lost about four hours of play time. I had saved once earlier, during a level, and that was the only save data I had – in the second half of level one. I was on the final part of level five. (There are about ten levels, if the walkthrough I checked out is to be believed.) I had incorrectly assumed that it would save my progress, in the beginning of the level I was currently on. This is not so. So, rather than throw all of that time away, and with a busy Christmas season approaching, I had to just go ahead and write this review, rather than start all over. When you do play, please don’t be like me – save early and often, using the Save Menu.

From an appropriateness standpoint, I think the T rating is just fine. There is some blood, mostly in cutscenes. There is death, as the war is very much real, and you are trying to make Earth and Mars better places. There is violence, in the form of shooting and the blades your fancy mechs are equipped with. The words ‘d*mn’ and ‘h*ll’ are used. The ESRB notes a billboard with bikini-clad women on it, that I did not notice. I believe there are hints of romance as well, though I was not able to confirm this (I noted it in a walkthrough).

Zone of the Enders: The 2nd Runner – Mars is a really fun action game set in a universe with lots of giant robots everywhere that you get to be a part of destroying. Honestly, I had a blast with it. I only wish that I was able to see it through to the end; I hope to have a chance to do that soon. (If this review drastically changes, I’ll update it if needed.) The VR mode is a nice touch as well, which I hope to revisit as VR headsets improve. Honestly, if you think high-speed giant robot combat sounds like fun, I can’t think of a compelling reason not to recommend this title. It’s a lot of fun. Just save early and often!