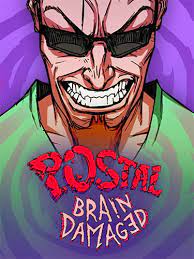 The Postal series is no stranger to being wacky, but it's still mostly set in a relatively realistic if a hilarious parody of the real world, one in which its title character tries to survive despite the world trying to end him. However, in the Hyperstrange self-proclaimed "boomer shooter" version of the Postal universe, The Dude is trying to escape his mind, and there is a reason they call the game subtitle "Brain Damaged".

The story starts with The Dude having fallen asleep after watching TV and finding himself in a bizarre dream where another version of him stole his TV and keeps taunting him. Meanwhile, as he tries to navigate his increasingly bizarre dream, all sorts of nightmarish horrors want to take him out. Of course, this is The Postal Dude, so his response is to paint the walls of his head with nightmarish entrails until he chases down his alternate self and gets his TV back.

This all said, the "boomer shooter" is quite literal, as Hyperstrange teamed up with Running With Scissors to make a parody of classic shooters like Duke Nukem 3D and Doom crossed with the bizarre world of Postal. Given some of the enemies are literal Vietnam war vets with double-barreled shotguns, the in-game comments of "Ok, Boomer" take on more than one meaning.

The gameplay is mostly like any other first-person shooter game. You make your way through levels grabbing weapons and gear to progress, blasting anything that might try to end your existence, and trying to progress till you make it through all the levels. Like the games it is parodying, it also has some puzzles to complete, both logic and physics related. Since it's also a Postal game, a lot of classic staples like using your urine as a weapon are still here, along with lots of enemies, setpieces, and references to the Postal universe. 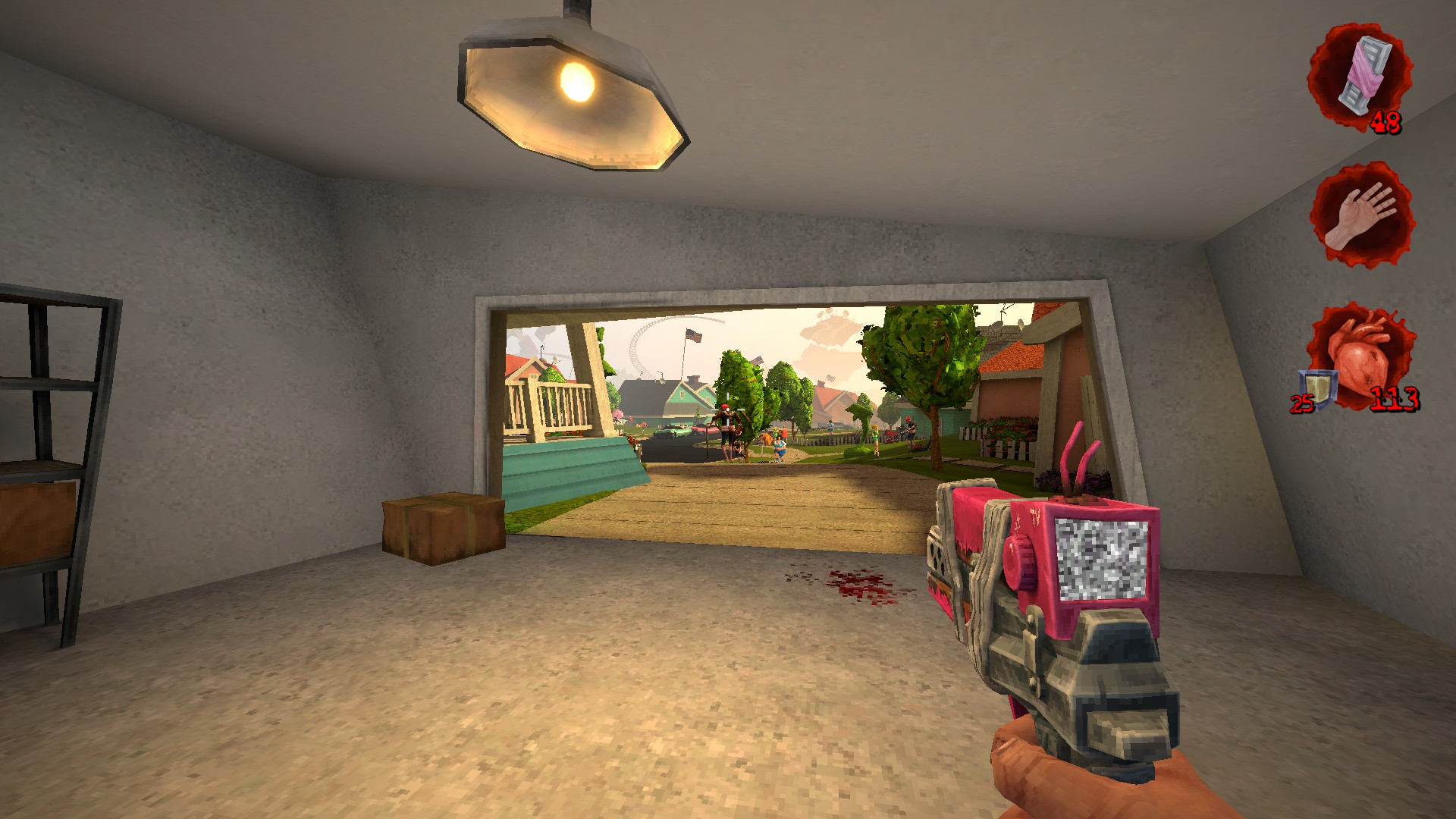 Strong Points: Hilarious blend of FPS gameplay mixed with the wackiness of the Postal series
Weak Points: Some mild clipping bugs
Moral Warnings: Profuse (if low res) blood and gore; lots of foul language (which can be reduced with an option in the sound menu); some sexual imagery including a brief uncensored shot of male genitals; some occult-themed enemies and general nightmarish demonic looking beings; option to kill non-combatant NPCs

Graphically, this game mixes a neo-retro, low resolution like the classic Doom and Duke Nukem 3D games with a lot of enemies and set pieces inspired by the work of Swiss artist H.R Giger, particularly his work on surrealism and bizarre dreamscapes. As a result, on many levels, this title will parody other media like The Sims, the Shawshank Redemption, practically every FPS game of the nineties, and Postal itself. They are fed through a Giger-style filter, resulting in many enemies resembling nightmarish parodies of Postal enemies, like the gimp-suited monsters with nightmare faces and the band members from Postal 2 turned into grotesque zombies. The settings of each level all have a schizophrenic mix of pastel meets gritty, which adds to the general theme that the player is experiencing the world inside The Dude's mind. There are also cutscenes in a Western cartoon style that set up the story and segue nicely into the game levels.

The music has a lot of fast-paced rock style music along with some classic Postal music, and both are also fed through the surrealism filter to complement the graphics. Corey Cruise voices The Dude, though other classic voices like Rick Hunter appear as well. Given this game is parodying FPS games that made a better reputation for being edgy, Corey has a lot of amusingly cheesy one-liners referencing FPS games and Postal lore. The sound effects are typical FPS fare, though they all land with a satisfying impact for weapons especially, making even the humble pistol feel like an instrument of death.

The game is controlled by either the keyboard and mouse or by any Steam-supported controller. The controls are remappable but the regular controls felt good enough for me either way. In either control scheme, controls are very responsive, which helps since this game is fairly fast-paced.

The stability is nigh perfect on Windows, all I experienced was some minor clipping issues that did not affect play (if anything, they helped me shoot a few enemies without them being able to shoot me). This runs near perfect on Linux and the Steam Deck, though some Proton users have to experiment with Proton builds to fix the video playback for cutscenes. The game uses the Unity engine and I noticed it seems to be optimized pretty well for a Unity game, load times were never very long. 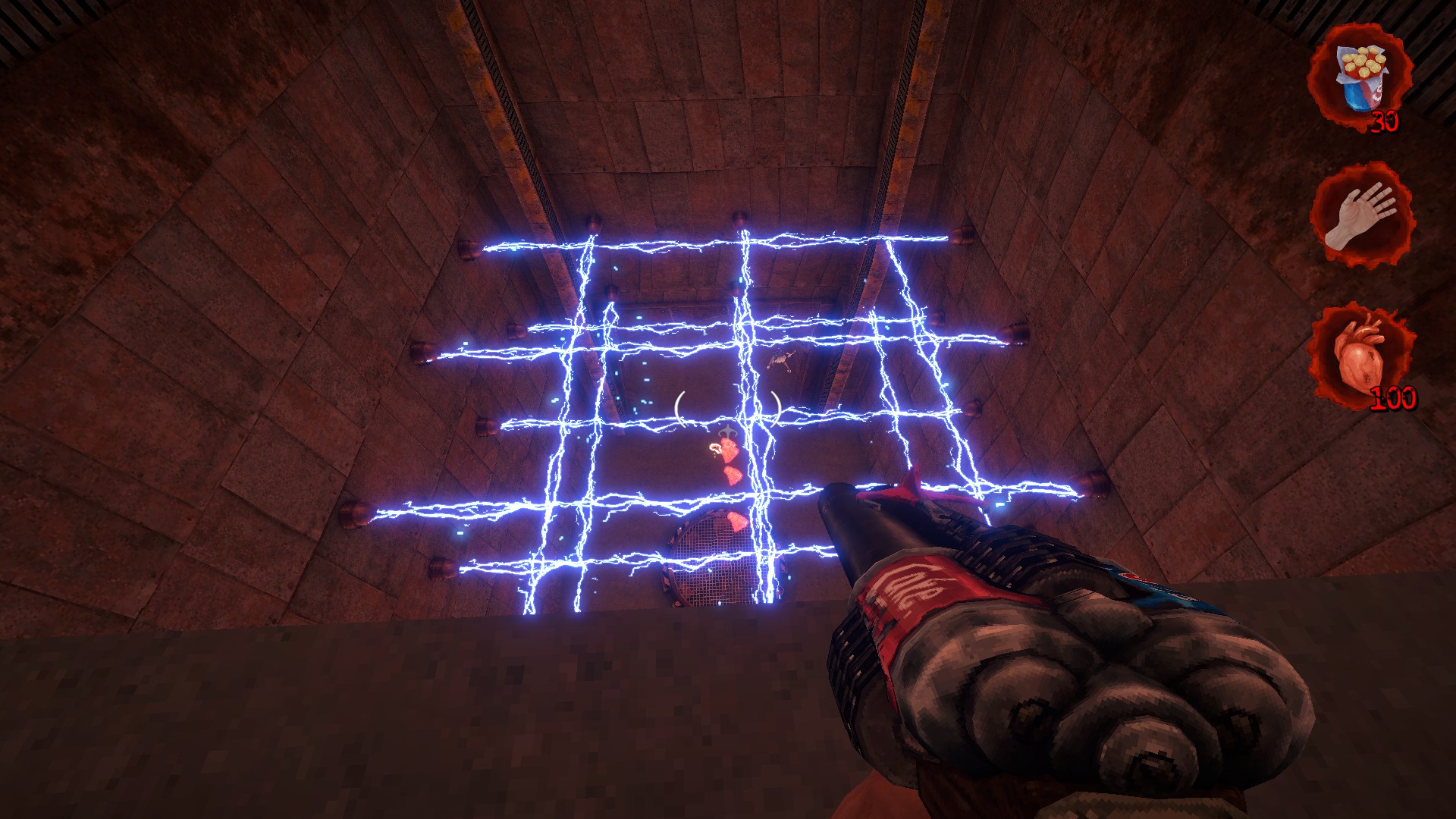 Morally, given it's a cross of classic FPS games set in the Postal universe, this is going to have some red flags.

Violence is going to be quite bloody and gory, in the classic Doom style, meaning lots of low-resolution blood sprays and gore everywhere. The Dude has access to all sorts of lethal weapons (this game has no non-lethal options like the main Postal games), including the use of his own urine, which can now freeze and set on fire enemies with certain powerups. There are non-combatant NPCs you can kill without penalty, but you are not obligated to do so. If you die, you fall to the ground, the screen goes black, and you respawn.

Language is going to be pretty earthy, including a lot of uses of the F-Bomb. The game does have an option to turn off The Dude's voiceovers in the sound menu, and this will reduce the amount of profanity and crude dialogue the player hears by quite a bit if they so prefer. There are some crude references to Catholicism in the voiceovers (The Dude is a canon Roman Catholic, he references the sexual assault of altar boys in one of his comments), but the only direct reference to Jesus is a respectful thank you after a respawn.

For the most part, the game features only low res pics of scantily clad women (much like the original Duke Nukem 3D) and some female enemies with female figures (like one in a gimp suit with a nightmarish face for a head). There is one cutscene however with a brief but noticeable instance of the Dude's uncensored crotch on display, mostly from behind, but you can see quite a bit regardless.

Some enemies (like the Dungeons and Dragon wizard parody) have obvious magical powers, but aside from that and some demonic-looking foes (everything has a nightmarish look due to the art style), there isn't too much else of concern, as it's established everything is a nightmarish being due to the game setting being The Postal Dude's dream. Morally and ethically, aside from the option to kill non-combatant characters, the objective is to simply survive the hordes of nightmare beings trying to kill you. The "Basement Dweller" enemy has a generic five pointed star pattern on their outfit and book (as well as a ground pattern where they can be found), it is NOT a pentagram, and it's mostly mockery of generic wizards (both in the generic magic sense and the derogatory term for a 30+ year old virgin).

Overall, this is a technically solid neo-retro FPS game married to the wackiness of the Postal universe fans of both would love. Morally, it's got a lot of violence and foul language, not to mention the brief moments of nudity, so this is for mature adults only bare minimum. Given it's fairly inexpensive and can be played with little knowledge of the Postal series (though that does make some of the in-jokes funnier), this is recommended if the crude humor and other moral issues don't put you off.