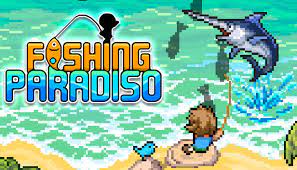 Thank You Odencat for submitting this through our Steam Curator!

A fishing role-playing game is something that hasn’t been done often, especially one that takes place in Heaven. Fishing Paradiso by Odencat has you play as an unnamed character who comes in contact with the god fish. He sends the character on a quest to fish, as fishing will lead this character to his “true Heaven.” Accompanying the player is a little bird going by Lil’ Birdy.

As Fishing Paradiso was ported from mobile devices to PC, there are three methods of control. The entire experience can be played with the mouse, a combination of mouse and keyboard, or a gamepad. The interface was made with a touchscreen in mind so using a gamepad can lead to more menu navigation. Fishing is the main part of the game and is a simple mechanic. You start from a neutral position aiming your rod before you cast out your line. When a fish bites (noted by a red exclamation point), you simply hold the same button used to cast the line to reel them in. Fish are color-coded depending on whether you need them for a main quest (blue), a side quest (red), or if they are rare (yellow). The role-playing aspects come from the fact that you can level up your fishing rod’s stats: Tension, stamina, charm, big hunter, and throw. Fishing gameplay is fast and snappy, but what I mentioned is all there is to it. If you happen to struggle with catching certain fish, all you can do is level up your stats with the gold gained from catching fish or completing side quests. After the one or two-hour point, fishing will remain the same for the rest of the playthrough.

While playing, you’ll meet a large cast of characters who have also died and ended up in Heaven for various reasons. Most characters have fairly lighthearted explanations as to why there ended up in Heaven; some are there purely by accident, and others are more tragic. A few characters have committed bad acts but still ended up in Heaven. They question these aspects as they feel more deserving of Hell due to how they lived on Earth. There are anthropomorphic characters, humans, animals, angels, and devils from Hell that are all part of the cast. These characters also give side quests where you will learn more about themselves and what they are trying to achieve in Heaven (or Hell), as well as the majority of gold that will be accumulated to upgrade your stats. There is no voice acting, but each character has sound effects that follow their text, such as Lil’ Birdy’s sounds sounding like the tweeting of birds. Fishing Paradiso is also a sequel of sorts to Odencat’s previous game Bear’s Restaurant so if you played that previous entry, you'll recognize a lot of the characters present. Fortunately, playing Bear's Restaurant isn't required to understand them. 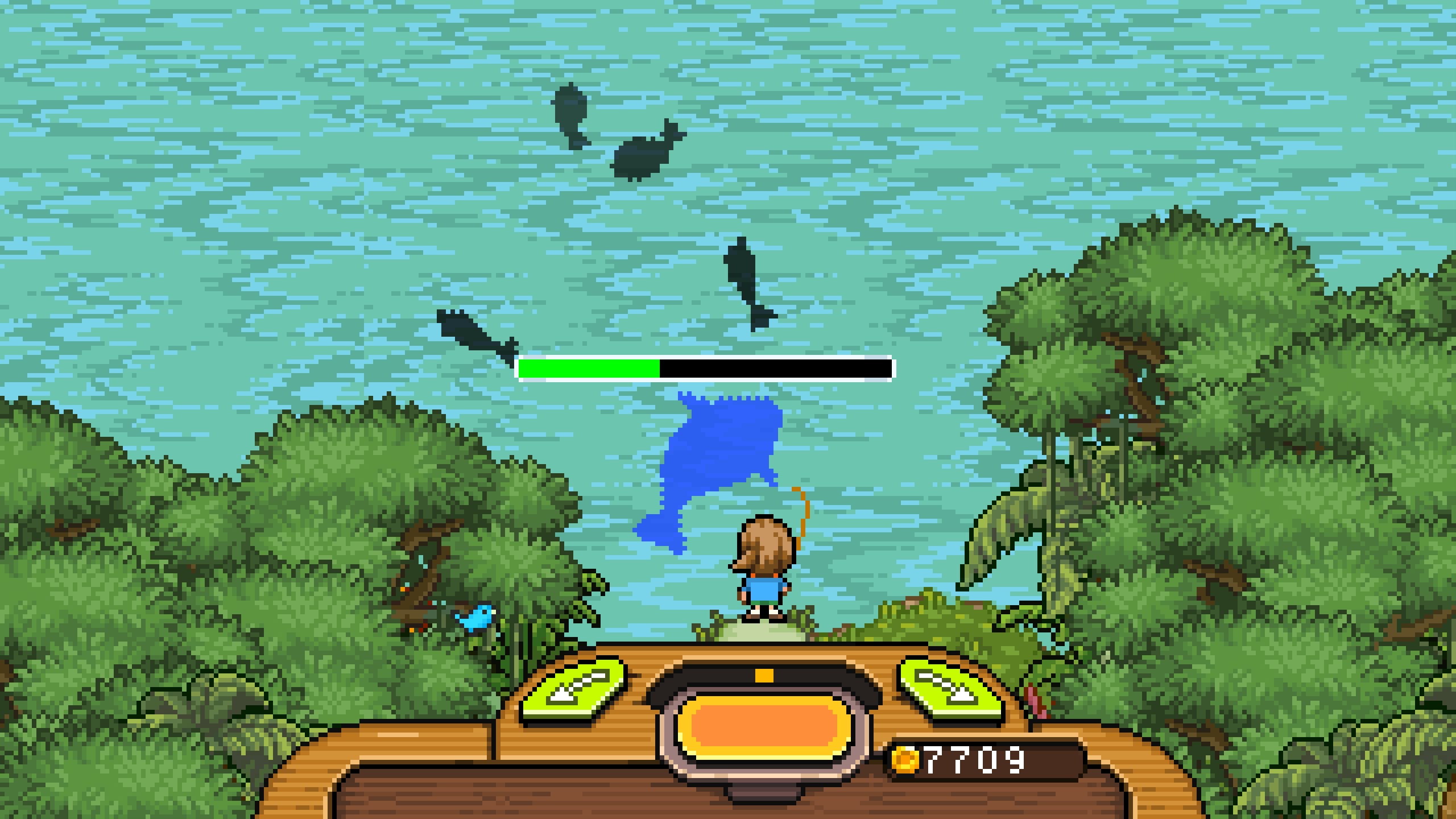 The style of Fishing Paradiso is like many of Odencat’s previous games. It uses 8-bit and 16-bit sprites with bright colors. The environments are greatly detailed and varied with jungles, forests, ocean caves, Hell itself (which takes a more general fantasy approach) and even the Milky Way. The sprites and graphics are good, but due to the aspect ratio of a PC and a lack of settings in the options menu, some moments can look stretched and blurry. Enabling integer scaling and preserving aspect ratio in your AMD/Nvidia setting doesn't seem to make any notable changes. Accompanying the graphics is soothing music that’s equal parts relaxing and energetic.

Now I don’t think Fishing Paradiso’s gameplay is bad, but my problem comes from the fact that the experience isn’t short. It took me around 13 hours to see everything that’s worth going for and more than half of that was spent in the post-credits where even a level difference of one starts to make massive differences. Beating the main story before credits roll will have your stats around level 4 or 5, beating the post-credit story will have most of your stats around level 12 or 13. And when all of the side quests amount to fishing a certain number of creatures, it can feel like a drag. Where the gameplay didn’t exactly leave me charmed, experiencing the story and characters made me want to power through it. It’s rare for me when I experience a large cast and I end up liking all of them. Each has widely different personalities and a compelling character arc they go through. In terms of the more funny characters, one of my favorites is a lovestruck lumberjack named Sergey who tries to woo nearly every woman he comes across. Yet the only woman that is reciprocating his advances, he avoids almost entirely. The reasoning for this I found quite funny. For a more serious character arc, there is a man named Johnny who, as he described it, committed dirty acts yet finds himself in Heaven and begins to question himself. I think for most people, the narrative will keep players invested. 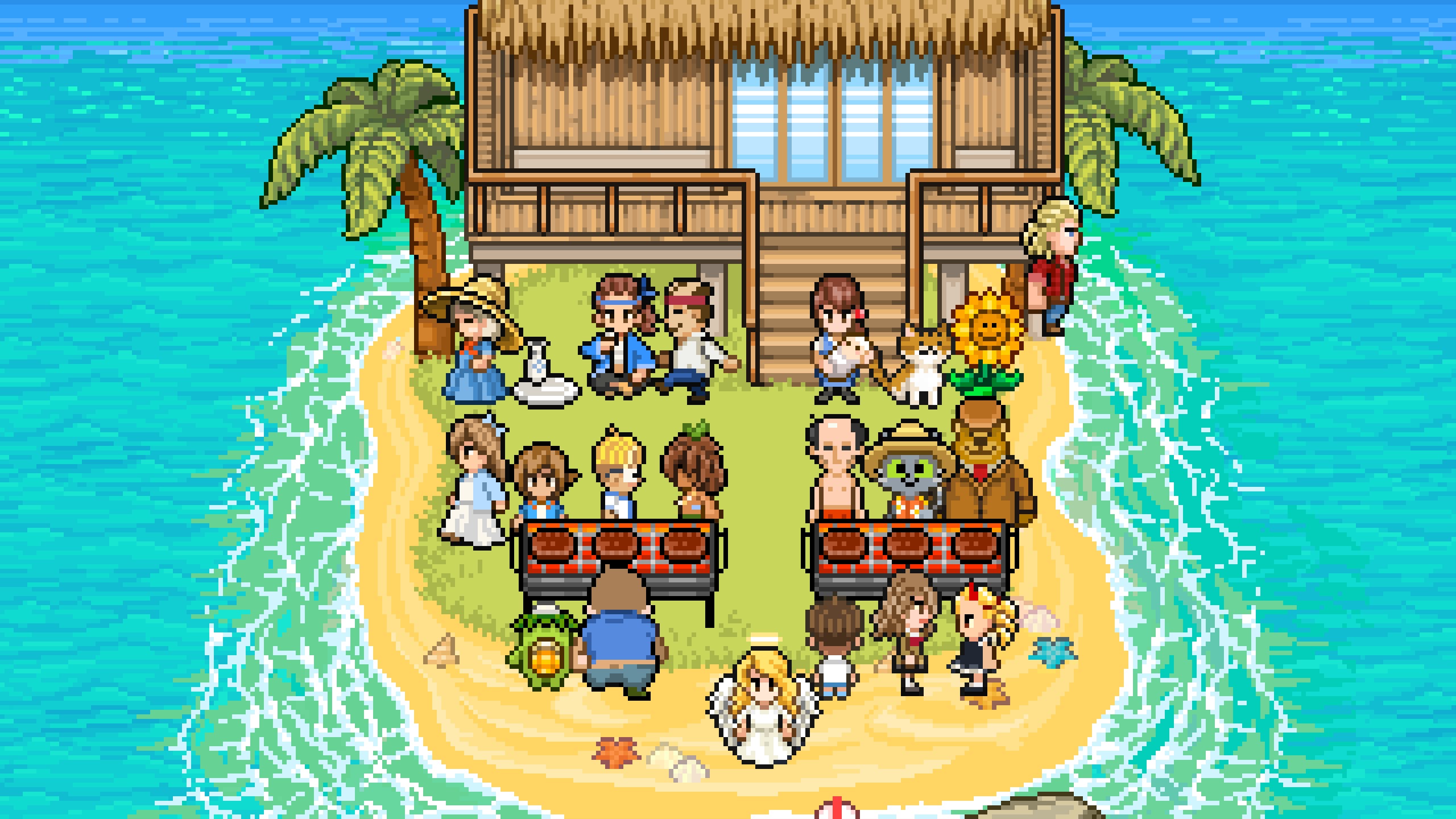 In terms of morality, there are some things to mention. Violence is typically kept to slapstick as violence is frowned upon in both Heaven and Hell. The worst in terms of crude language is the word “crap” used exactly once, but there is also the usage of "OMG" by one of the characters. Supernatural aspects are spread apart across the game. You’ll meet angels, devils, a kappa, and even Charon, the ferryman of Hades. As stated before, Hell takes a more general fantasy approach to its design with a lake made of lava, but also takes a bit of inspiration from the Greek depiction of the Underworld. From the context given, it seems like getting into Heaven or Hell is more based upon the actions made while living than their relationship with God. Hell itself acts as more of a Limbo for souls that are being judged. Another reference to Greek mythology is a fish called the Charybdis, a type of sea monster in Greek mythos. Depending on how they develop, they will either get passage into Heaven or go to a place further below than Hell where the damned cease to exist. While Fishing Paradiso uses flowery language, it still touches upon more serious topics such as murder and suicide.

Existentialism, loneliness, escapism, love, loss, forgiveness, regrets, and moving on are just some of the many topics discussed in Fishing Paradiso. While the gameplay is relaxing at times although overall a bit on the weaker side, experiencing the characters as well as the player’s personal growth throughout the journey is very heartwarming. While Fishing Paradiso manages to aim for a general audience, the themes present will more likely appeal to older teens or adults than young children. The differences between PC/Switch and mobile platforms are that the former has a one-time charge and the latter has in-game purchases while being free. In the end, if you enjoy narrative-driven games, Fishing Paradiso will hook you in.