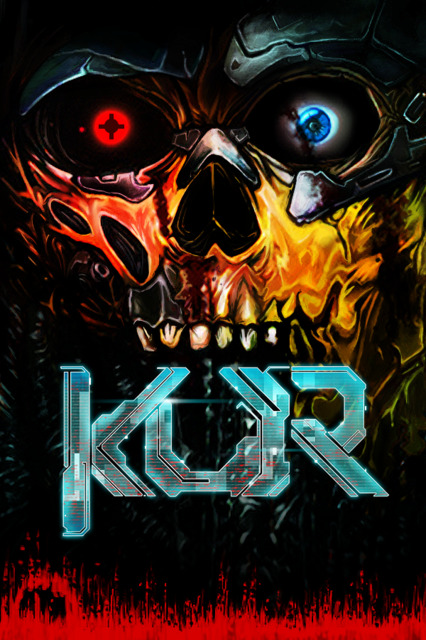 Before starting the preview proper, I want to give my thanks to The Quantum Astrophysicists Guild for providing me with the review code of this game.

The late years of the gaming world have been characterized by the resurgence of old-school shooters (aka. Games like Dusk, Ion Fury, and WRATH are an example, as they pit the player against overwhelming odds and hordes of enemies. In those kind of games, the player is expected to overcome their rivals by a mix of good movement, aim, and proper use of a large arsenal that they'll have at their disposal. The Doom and Quake series are the first things that come up to mind when there's a mention to such a thing as an old school shooter game. However, sometimes, amidst the ever increasing number of titles flowing into the boomer shooter market, there's some games that strive to shake up the formula a little bit. One of those games that tries to add new mechanics into its gameplay is KUR.

What is KUR? KUR is a first person shooter game released on August 13, 2021, and developed by the indie team 'Really Ragdoll'. The game itself is a throwback to movement shooters, specially to Quake, and it is powered by the Unity Engine, the same engine used in the game of Dusk. Graphically wise, the game feels nice and intuitive to look at, as from a glimpse of the color of some of the more regular mooks you already know what sort of type of enemy they are, which can be useful to adjust your strategy as a whole.

The movement in the game feels great to use, as it allows you to do powerslides, and hop around the entire level like a hyperactive bunny. Jumping constantly in the game increases the speed of your character, which makes regular walking completely irrelevant. Said mechanic has been inherited from games like Quake as a whole. The entire concept of the game is built around the proper use of the movement mechanics that the game offers you, as you will have to dodge several enemy projectiles all at once going at you. Overall, the movement is solid, and it allows you to perform all kinds of movements that can give the player a sense of satisfaction when they kill an enemy while powersliding on the floor.

However, the movement system of the game requires an energy resource that enemies drop occasionally when killed. The aforementioned energy resource is required in order to perform all of the different movesets you can do, including the option of kicking your enemies. The kick function also works against certain doors too, allowing you to open them wide with a powerful kick, squashing the unfortunate enemy that is standing behind it. Parkour can also be done by kicking the walls and jumping around in that fashion, although it needs some refinement altogether, as it feels slightly clunky to use as a whole. 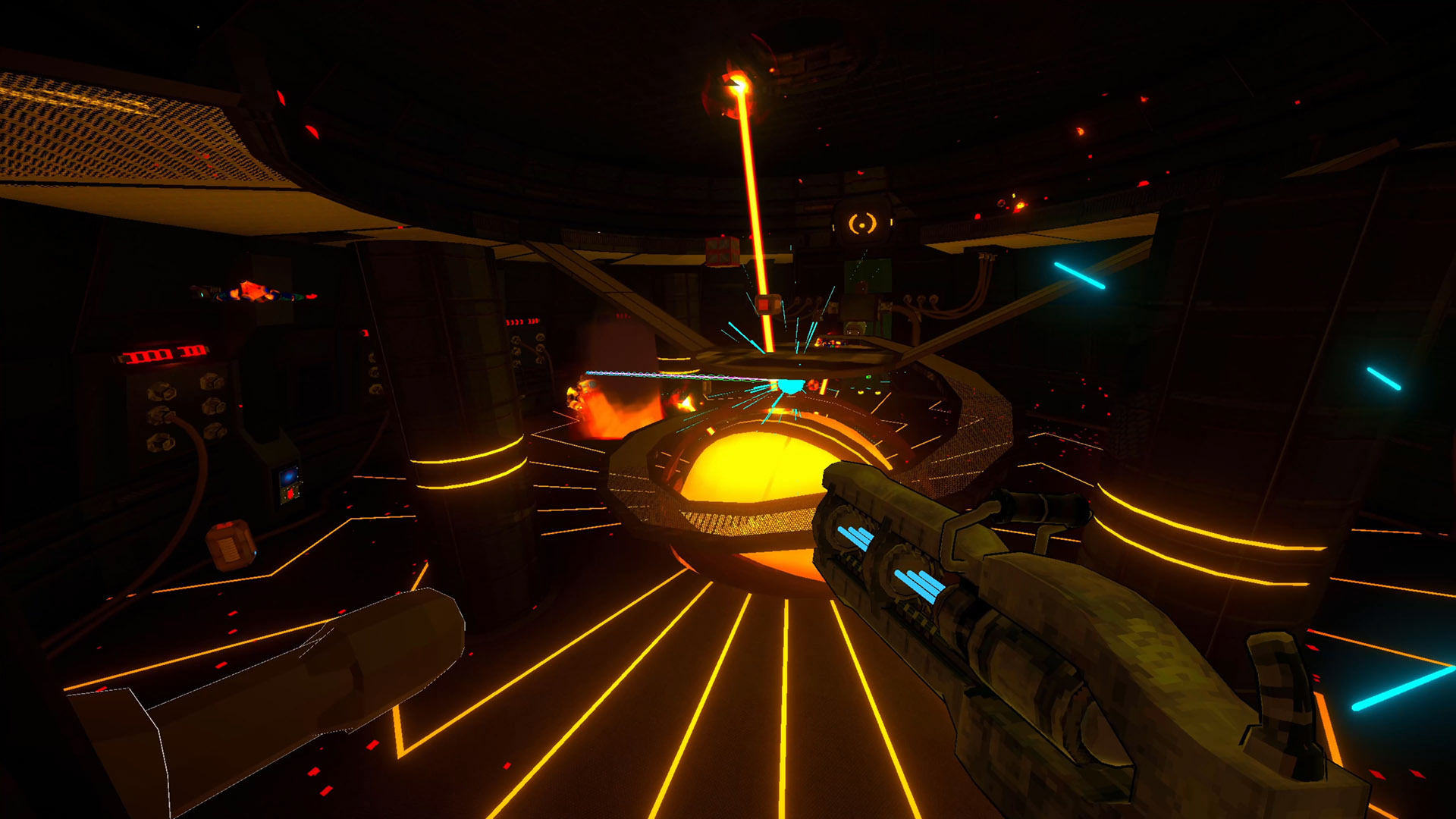 When it comes to the combat of the game, it is pretty straightforward. The game includes several of the classic weapons that are characteristic of the Arena FPS genre, like the pistol, shotgun, rocket launcher, assault rifle, and so on. The player will need to mix the use of the weapons up, as certain enemy types seem more susceptible to some type of guns overall. Said enemy types can range from critters, gun mooks, melee mooks, and disruptors, to flyers. A classic Arena FPS roster as a whole. Due to the game being an affectionate parody of the 90's shooter games, the names of the guns tend to have a more comedic flavor. For example, the dual pistols are referred to as 'Akimbo Pisties'; the Shotgun is refered to as 'Bouncing Betty', an honorable mention to an infamous WWII German bouncing mine; and the freeze gun of the game is called 'Mr.Freeze', an affectionate reference to one of the Supervillains of the DC Universe, the Ice-Man Victor Freeze. My only issue is that while you can use this entire arsenal, there doesn't seem to be much of a particular use for the other guns like the Freeze Gun or the Shrink Ray, as there's plenty of ammo for the more conventional guns to do the job. In some cases, weapons like the rocket launcher seem to be slightly strange in behavior, as I could burst down one of the larger enemies quicker with the Assault Rifle, while the Rocket Launcher felt like throwing wet paper at it. Not sure if it's a hitbox issue, or if it's a damage numbers issue.

The game also introduces an upgrade system that can only be used by finding stations that are scattered all over the game, in order to enhance the performance of the protagonist's Cyber-Leg. Each station unlocks one upgrade you can choose. Some of the upgrades include actives, like a stronger kick that can be used to kick enemies further away, and passives as a whole too. However, I feel that the passive upgrades have better options than the active upgrades, as it allows you to at least conserve more resources that can be used in other encounters.

There isn't much to tell about the story itself, as the game offers more of a gameplay over story segment. You play as a mercenary working for the Augmented Intelligence Corporation, a parody of a cyberpunk-esque Megacorporation, overly long NDA agreements and nonsensical contracts included. Your character is hired to investigate the disappearance of a colony on Mars, finding out that the facility has been overtaken by hostile robotic lifeforms. Pretty familiar to the plot of Doom and Terminator combined, except with a more humorous tone to it. Of course, nothing is as it seems, as there's a sinister mind involved behind the hostile takeover of the Mars Colony.

The game also offers a large variety of settings that you can toggle or fiddle with, including the option to change the keybinds to more preferred options. Graphical options like Screen Space Reflection and such are also available, and I personally recommend that you turn V-sync on if you have a powerful rig. I had to turn it on in order to prevent my computer from generating too many frames and overheating my CPU. Overall, the options themselves are intuitive and easy to fiddle with, and they can be adjusted from the in-game options menu however the player sees fit. 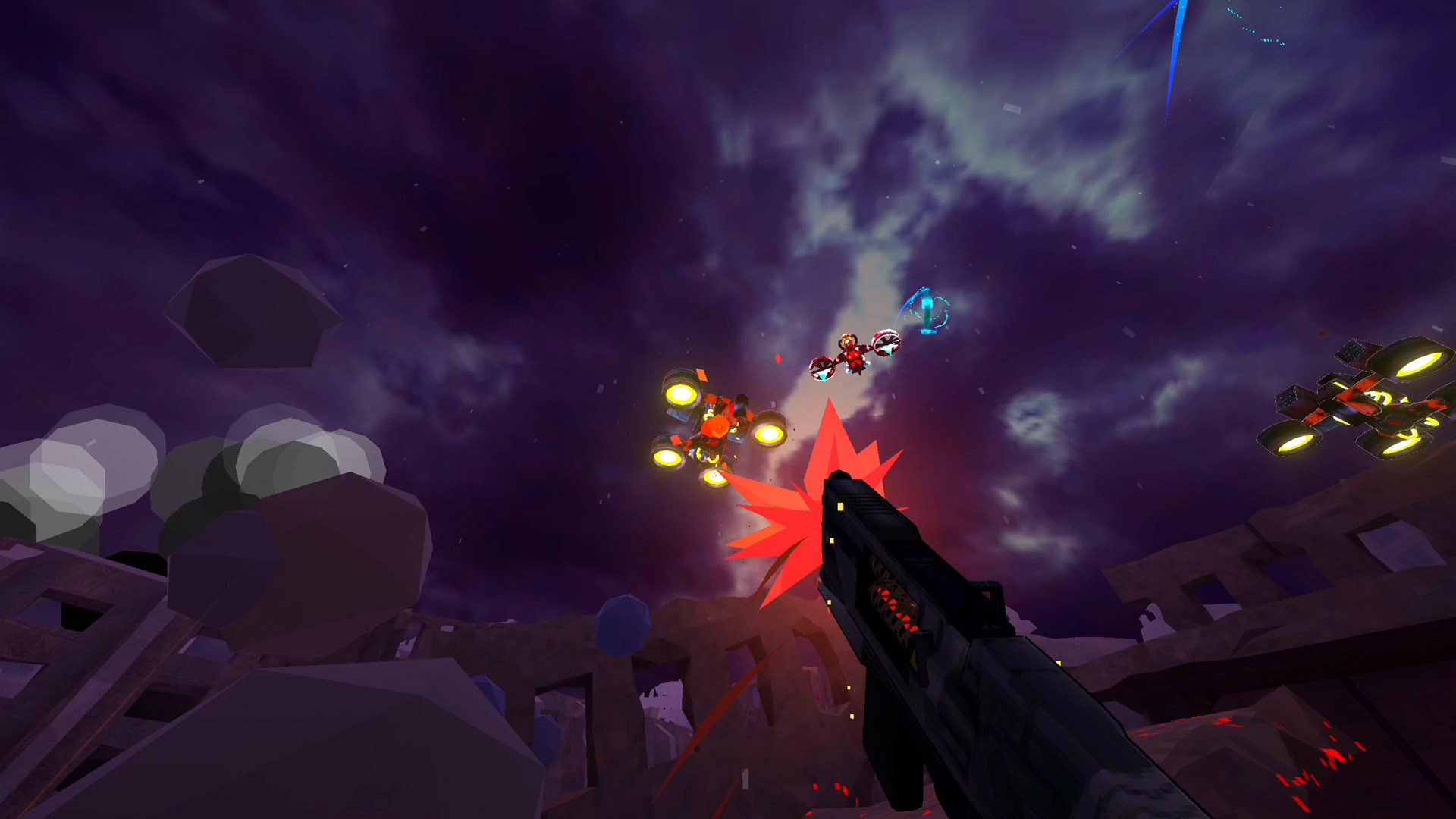 Now, when playing this game, I couldn't help but notice some jank going with it. In one of the instances, I ended up dashing in such a fast manner that I ended up clipping through the map and falling to the void. In another instance, I've had several map layouts which were supposed to be flooded change to un-flooded after crossing a hallway that separated these sections. It can be excused by the fact that it is an Early Access game on Steam after all, but it is still worth to take notes of it.

On the topic of It's moral content, I'll have to warn that this game does have some elements that need to be made aware of.

Violence is a pretty explicit thing in this game. There's a large amount of blood present in this kind of game. Enemies will bleed a good amount of blood when shot, rocketed, stabbed, and so on. Enemies can also be 'gibbed', a term used by many games to describe the complete destruction of the body, torn apart by massive damage. As such, copious amounts of blood and pieces of flesh are plentiful in this kind of game. The design of the enemies themselves doesn't help in that matter, as they are mostly robotic entities with human flesh in them, and even one of them is a bloody skull with spider legs. They are mostly humans turned into murder robots, like the ones you'd see in the 1999 'Virus' movie.

When it comes to the term of language, there's surprisingly very little explicit language in the game itself. The trailer of the game had been filled with so much explicit language that it almost looked like it would be a characteristic inside the game, but there's barely any of it. The most profanity you'll find in the game is the word 'dang' and that's probably it.

On the topic of the supernatural elements, there's not much that can be said about it either, except for the presence of a cybernetic dimension that the protagonist ocasionally visits on the fly. The dimension that the player visits seems to have zombie-like entitites that dissolve into 0's and 1's when they die, removing the bloody bits in said dimension. There's no iconography that could refer to Satanic origins, so in that department, it can be considered safe.

KUR is a movement shooter game that can be classified as a diamond in the rough. There are problems with its jankyness and some of the issues with the hitboxes and what not, but overall, it is a solid game that manages to shake up the traditional old school FPS formula with some twists of its own, and in the current video game market, anything that is a novelty is always appreciated.