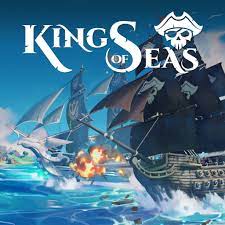 Thank you Team17 for providing us with a review code!

Sailing the seven seas as a pirate has an appeal that most people can get behind. The exploration, the freedom, the shanties. It’s no wonder that pirate media has stuck around for as long as it has. King of Seas by developer 3DClouds is yet another entry into the pirate life—although its attempt to capture that feeling comes with… varying results

King of Seas has the player choose between Luky or Marylou, the son/daughter to the king of the Royal Navy. Unfortunately for them, someone within the Navy doesnt like that Luky and Marylou are next in line to the throne, so they have assassinated the king and framed Luky/Marylou for the action. After Luky/Marylou is hunted by the Navy and supposedly left for dead, the chosen character is saved by Captain D. Morgan and Leeroy. They are now forced to join the pirates because they were excommunicated. The rookie pirate must now get used to their new life, as well as find out who is truly responsible for the king’s death.

You’ll navigate through the procedural-generated open world from a top down perspective. The world is displayed in a colorful 3D style resembling a CGI cartoon, whereas the characters are portrayed in a 2D style similar to Genndy Tartakovsky’s work. I found both styles to have a lot of charm as the characters have great ranges of expressions, and the 3D makes the world feel vast with numerous islands scattered throughout the blue waters, as the waves glisten from the sunlight.

In a pirate's world, music is typically accompanied with sea shanties and jigs. Although King of Seas contains none of that (unfortunately), the sound direction still complements the world and setting. The music and instruments take a more theatrical approach ala Pirates of the Caribbean. Emphasis on strings and brass set the mood on voyaging on a grand adventure. Booming effects whenever cannons fire off are heard in every battle, further immersing yourself when sailing the seas. When dialogue is presented, you can hear the scribblings on a paper for every letter displayed. There is no voice acting, but everything else makes up for that. 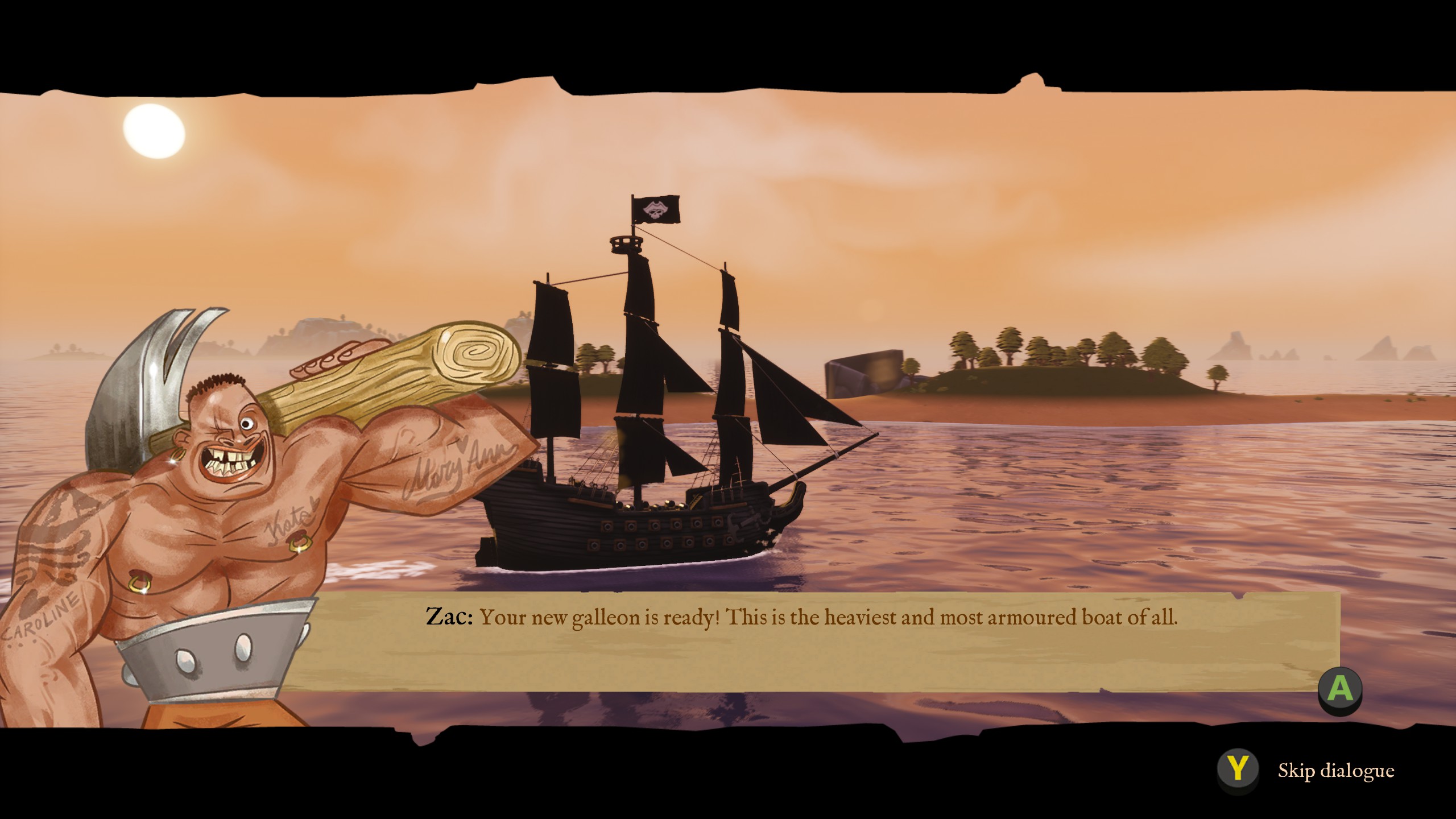 Strong Points: Charming art style; naval combat is engaging and enjoyable
Weak Points: The gameplay between the combat is monotonous and extremely grindy; navigation is very slow
Moral Warnings: Ship violence; pirates follow the traditional view instead of the romantizied one ; Voodoo magic; some crudeness such as an ability called “pee on these cannons”; small amounts of cleavage from a few characters; mild language such as “h*ll”, “d*mn”, and “b*st*rd”

King of Seas contains many role-playing elements such as leveling up, equipment for each part of your ship, as well as a skill path focusing on navigation, combat, or special effects whether in or out of combat. For each piece equipped, your ship visually changes as well. Leveling up happens for nearly every action; from completing sidequests to simply gathering materials from the overworld. In almost all cases, the world levels up with you so your source of strength mostly comes from the equipment obtained.

Sidequests, looting, pillaging, selling goods, and conquering are all part of the game plan. Despite most of them being presented in a way that makes them seem optional, they are borderline mandatory because of the main quest halting progressing such as making you buy a specific ship or reaching level 35. Strangely, a lot of these tasks also manage to be boring because of a combination of slow navigation and repetitious tasks. Most sidequests tend to be fetch quests or escort missions where you collect some goods and deliver them to a person, or help a feeble ship reach a destination nearby. Looting in the overworld is tiring because some goods can only be collected at a certain speed, and other goods have a long animation time before being collected. You’ll be doing these same actions hundreds of thousands of times over the course of the game so the tedium adds up.

Even with the fastest ship available, navigation is still painfully slow. There are five ships in total and each excels in their own way. Some ships are “nimble”, while others are good at combat. In a way, you’re supposed to choose the right ship for the right mission, but since you only have one pirate stronghold (ships can only be swapped at strongholds) until the late game, this means you need to slowly make it back to your base of operations every time you want to swap a ship. As it takes minutes at a time to even reach other friendly strongholds and most missions are located near the top or middle of the map, this becomes some of the worst padding I’ve seen in any video game.

The controls are a little weird and are specialized for controllers in mind. The bumpers act as your speed control with the right bumper activating your sails, increasing your speed up to three times. The left bumper decreases your speed, and the triggers shoot your left or right cannons. The face buttons act as your special abilities once obtained. The left stick controls the movement of the ship and the right stick controls the camera. You’re constantly speeding up and slowing down to collect loot or to turn and steering is also slow. It seems unfair too as enemy and ally ships can turn far better than you can, even when you put all your points into improving your steering and acceleration. 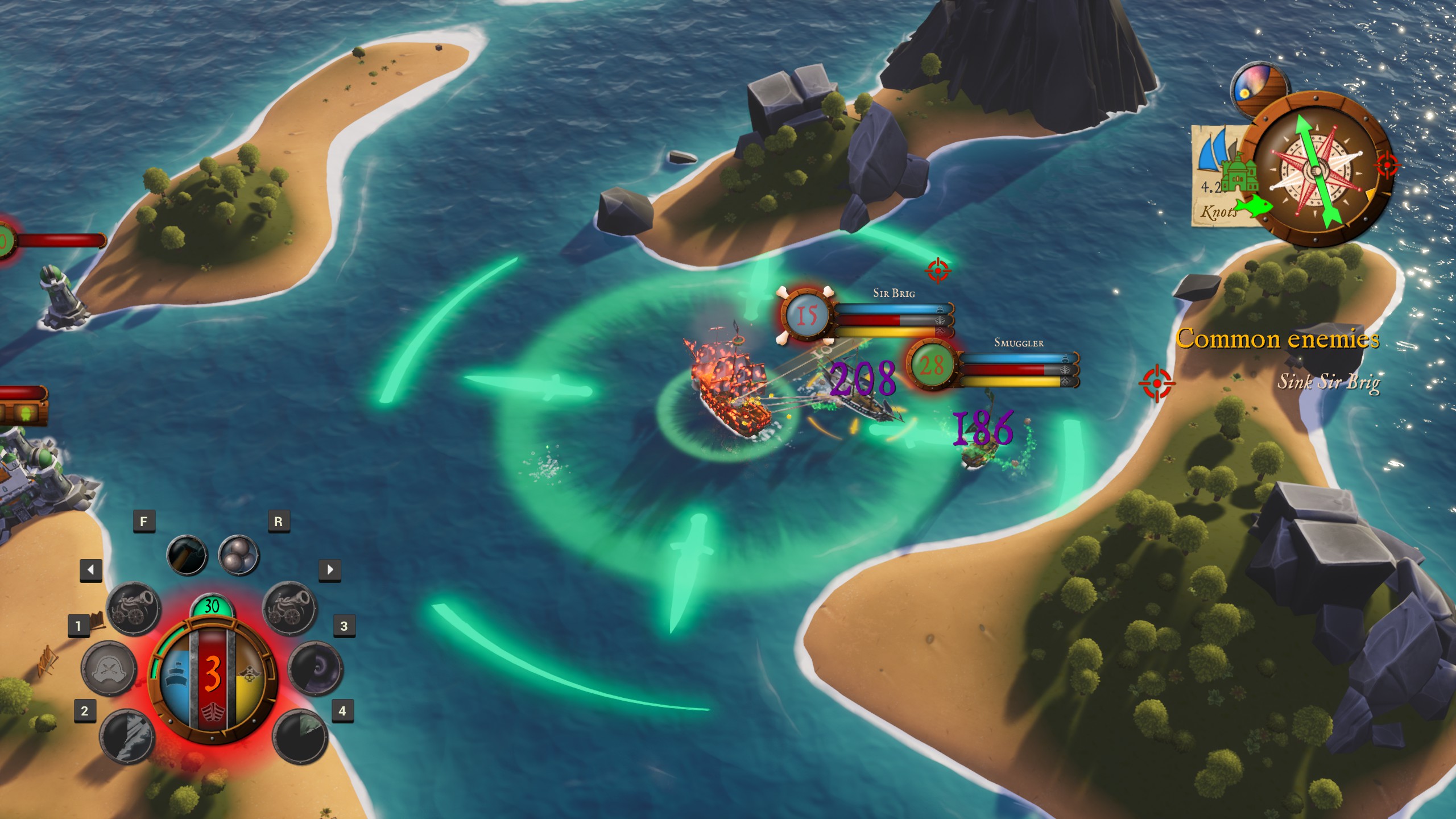 A lot of the aforementioned decisions are strange—as the combat is actually good. It’s a little simple as you have your cannons and abilities to harm other ships, but the way it’s combined with the sailing mechanics make it engaging. Sometimes you’ll fight multiple enemies at a time and you have to navigate in such a way to maximize damage while making sure you sustain minimal damage. Every boat, including yours, has three health bars. Blue represents sails, red represents hull, and yellow represents crew, which determines the amount of cannon fire. Each cannon type (that swaps with the right D-Pad) affects a different health bar. You can target the hull health, but this leaves the enemy able to fire off abilities as well as sail circles around you. Sometimes in a fight, it might be best to take out the sails of a speedy ship or take out the crew of a powerful ship before you start chipping away at the hull heath. With numerous effects from different types of cannons and the abilities obtained,  there’s a combination of tools to fit any playstyle. It is genuinely fun to experiment with all the abilities, even if some are so powerful that there is little reason to use others.

Unfortunately, combat is something that Is seldom done in King of Seas as most of your time will be spent grinding away. I understand that nearly every RPG has a moment where the player must grind, but 90% of the game is spent grinding—whether it’s obtaining 100,000 gold to fulfill some objective, conquer some strongholds just because, or collect a few hundred of some random material that you most likely don’t have as you’re constantly selling them to acquire gold. There’s always something stonewalling your progress, forcing you to pluck away at the same repetitive loop for hours on end. There are five difficulty levels, with the first two having a "story focus" and the next two having a mechanic similar to Souls-like games where if your ship sinks, you have a second chance to recover your equipment or it's lost forever. King of Seas actually takes this a step further where you only have a limited time before it disappears, instead of lingering around indefinitely. The last and hardest difficulty implements permadeath.

The "challenge" of King of Seas actually works against it because of the aforementioned grinding. Difficulty settings usually add another layer to the content, but a lot of the challenge can be circumvented by simply grinding. Infact, it is the best option to not engage in combat because you're rewarded more for repeating the safe methods of obtaining better gear. Because of this I personally recommend to stick with the first two difficulties as the higher difficulties add very little to the experience. I actually restarted my progress on a lower difficulty over halfway through because it greatly frustrated me that nearly 6 or so hours of grinding amounted to nothing because I got cheesed by the AI and lost what I farmed for. I’m all up for a challenge, but not when the best approach to it is to grind away at boring side content.

So with the moral warnings, there are some to be mindful of. There is ship violence with ships blowing up and sinking when defeated. Language isn’t too bad with one usage of “d*mn”, “h*ll”, and “b*st*rd” each. Sexual content only amounts to some cleavage such as when Marylou is in her pirate garb and a few other NPCs of nobility. The occult is when it gets weird. There’s a lot of Voodoo-based magic in King of Seas, and it plays an important part in the narrative. The main villain uses Voodoo magic and Luky/Marylou has to resort to it at one point in the story too. There’s an entire skill path based on Voodoo, and a few abilities use Voodoo too. There are ghost ships, as well as a ghost NPC who looks like a skeleton. With cultural, there’s the obvious thing about playing as a pirate crew. The crew (with the exception of Luky/Marylou) have no qualms about raising arms against the allied faction for their own benefit. Eventually, you’ll have to seize control of some of their strongholds for a main mission. Some crudeness can be found with an ability called “pee on these cannons” where the description states that the crew pees on the cannons to cool them down, reducing the cooldown time between firing.

After about 22 or so hours, my time with King of Seas came to an end. The combat can be fun to engage and mess around with. The look of the game is something I find very pleasing and the sound effects match the aesthetics, but all the gameplay choices between the combat are such a bore that I’ll most likely never revisit these seas again, especially since there’s no new game plus feature. I’m sure there’s an audience out there that likes massive grindfests they can sink hours into, but I’m obviously not part of that. When King of Seas leapt into the waters, it realized too late that it didn’t even know how to swim.