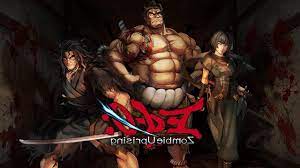 Thank You D3PUBLISHER for providing us with a preview code!

The Edo period of Japan and zombies. Not a super common combination but a welcomed one nonetheless. Ed-0: Zombie Uprising is yet another action-roguelike released in Early Access. It contains procedural-generated levels, a grid-like map structure, and items that the character can collect while going through the floors. Unlike a true roguelike, Ed-0 does not contain permadeath, nor is it turn-based.

Ed-0 actually takes heavy inspiration from the Mystery Dungeon series of video games. Most people may know of Mystery Dungeon from those Pokemon spinoffs with the surprisingly good narrative while others might be more familiar with Shiren the Wanderer series. It’s almost just like those games except in a full 3D environment and swapping out the turn-based combat for real-time action.

Now the main goal of these Mystery Dungeon games are to scale a tower or dungeon going through multiple floors, attempting to locate the gate to move on to the next floor. When starting on a floor, the entire map is covered. As you go through the area, the map slowly uncovers. Remember, the goal is to move on to the next floor so uncovering the map isn’t necessary to move on. Although one playstyle is to rush the gate as soon as possible, another playstyle is to explore the area, gather resources, and improve your stats through consuming vitality and strength pills. The danger of the former is that you may end up unprepared for the many enemies that await you, while the danger of the latter is that you’ll probably run into a random event and die.

The tutorial is both good and bad. It does explain certain mechanics, and in the pause menu you can always go back to refresh yourself, but other things it will explain either too late (like traps for one annoying example) or not at all (like that the samurai character has a follow up on his heavy attack). The latter made me first believe that the samurai character was worse than I think now as the first instance of the heavy attack has low stagger, but the follow up has high stagger. Traps are especially dangerous as they can inflict status effects on you such as poison. Fortunately, zombie enemies can also get affected by these traps and status debuffs. But the game doesn’t tell you about traps until you trigger one. The tutorial could use some improvements and explain some mechanics in further detail.

Since Ed-0 is an action game, you have your light attacks and heavy attacks. Light attacks are quick and numerous while heavy attacks can charge up to deal strong damage. You have the ability to jump and lock on to enemies. Throughout the levels, you can pick up scrolls that grant access to up to four special moves. They’re usually very powerful but go on a cooldown when used. If you collect a scroll that has the same ability as one in your slot, you can upgrade it with the choice of three random abilities.

Enemies are all different types of zombies. The most common ones are the slow-moving zombies. They might be sluggish, but pack quite a wallop. They are numerous so if you don’t take caution, you can quickly become overwhelmed and die quickly. Other zombies include shriekers that summon, samurai zombies that can potentially guard/counter your attacks, and a strange zombie with a growth on its back that can knock off your items/charms. There is strategy in how you approach each floor which is something I appreciate. One problem is that these basic zombies tend to have a lot of health, so if you don’t have your stats boosted by a lot or don’t have a good set of special moves, you’ll spend a lot of time hacking away at the zombies. It can get excruciatingly repetitive.

Floors are designed to look very samey, as you’re meant to be exploring an unknown labyrinth. Each level is varied in visuals as you start in a forest and move on to a traditional Japanese building with fusuma (sliding doors). The graphics themselves are realistic-looking with an oily sheen on some characters. For how low the budget is, it’s acceptable.

Ed-0 expects you to die a lot, and when you do, you’re sent back to the village. Narrative-wise, why you don’t actually die is because your player character is a Zom-Being. They are a special type of zombie that comes back when they die but aren’t mindless like the typical zombie. As you earn your two resources, being gold and virtue through killing zombies, you can use gold to permanently upgrade your health and attack power. Virtue is used to level up, opening slots to grant buffs such as more healing consumables or recovering health and hunger when moving on to the next floor. These perks are earned by unlocking achievements and can be leveled up by completing more requirements of that achievement.

Going back to hunger, Ed-0 contains hunger mechanics, just like those Mystery Dungeon games. Personally, I never liked hunger in any video game as developers never do anything interesting with it. It’s always some half-baked method of resource management and a timer that forces you to allocate inventory to food. I still don’t like it in Ed-0. In fact, I probably like it even less because of how limited your resources are, or you reach a point where hunger is a non-factor.

After beating the three main levels in the Early Access build, you unlock the sumo character as well as six side missions that you can access through the village hub area. The sumo character is bigger and slower than the samurai character. He has a palm slap that moves him forward and can be repetitively chained into each other so he can slap the zombies forever if he wants to. To make up for his big size and slow speed, he has iron skin which makes him unflinching when using certain moves. Now the balance between the samurai and the sumo is uneven because the sumo has flatout better special moves than the samurai. A lot of the sumo’s moves can instantly kill zombies, even the giant (non-boss) zombies that typically give any player a lot of trouble. Although I do find it comical that one of the sumo’s special moves has him flail around these giant zombies that are twice the size of him like a ragdoll.

Besides the whole zombie thing, there are more moral warnings and concerns to touch upon. Ed-0 is a very violent game with copious amounts of blood and gore. In the options, you can turn off most of the blood and gore. Some blood, like bloodstained zombies do stay. When it isn't disabled, blood splashes on both the walls and the player character while their limbs can be hacked or ripped off. There are more supernatural elements in play as the gates are modeled after a torii. In the middle of them is a portal that either sends you to the next floor, or a void world where you either rest/restock, choose an item, or defeat a horde of enemies. There is also the intoxicated status that has either you or the enemies fall over after a few seconds, while puking all over themselves and everywhere. With the sumo wrestler, what he wears is considered a mawashi. They are a special type of loincloth that all sumo wear. The sport of sumo is considered sacred in Japan and while the sport isn’t considered “sexy”, the playable character may have some form of “sex appeal” (or a power fantasy) as he is much more muscular than the average sumo wrestler. You will be staring at his buttcheeks often due to his garb.

As of this review, Ed-0:Zombie Uprising has three main missions that can be repeated, six side missions, the ability to reach Virtue level 5, and two playable characters. At first, I wasn’t too keen on the experience as I was trying to play it like a traditional action game. Once I started to slow down, take my time, and treat it like the Mystery Dungeon-inspired video game that it is, I started to warm up to it. The Steam trailer didn’t do the best job in portraying what Ed-0 was like as it had a lighthearted goofy tone that made a person think they’re mowing down huge waves of zombies in an over-the-top fashion—only with roguelike mechanics. In actuality, it’s a slow burn of a Mystery Dungeon roguelike with action elements.

But that doesn’t mean it isn’t without problems. For an Early Access state, it does have some issues with stability such as unstable framerate, weird collision detection, and a couple of bugs regarding enemy AI—but I haven’t experienced a crash yet. There are times when it can feel like you never progress despite spending hours playing as death doesn’t feel like a learning experience. It more feels like you just happened to get screwed over by the typical roguelike nonsense. In most cases, I felt like dying in Ed-0 wasn't my fault. The enemies with too much health can also make the game feel repetitive. On the other hand, it has a pretty steep learning curve and you are eventually rewarded if you stick with it. In terms of morality, it’s like any general hyper-violent fantasy piece of media. In its current state, I both recommend and do not recommend Ed-0. For people who want or expect fast-paced action, this isn’t it. If you like Mystery Dungeon games and wanted a more action-oriented one, you’ll like this or you may eventually come to like it when it gets its full release. There is still one more character (a female ninja) and many more levels to be created so at the very least put it on a wishlist if you're interested.