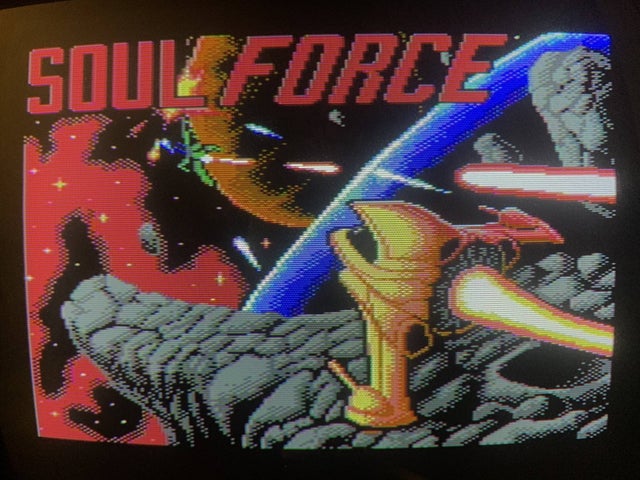 The Commodore 64 PC was popular in 1980's Europe but mini consoles and emulators are available, commercially and publicly licensed throughout the world. New games are still being produced for it today. One such game for it is Soulforce released in 2020 by Protovision.

{spoiler}I used the rapid-fire option of the digital edition of the ocean cartridge in an emulator, and save states on the easy difficulty setting.
C64HQ color palette on NTSC.{/spoiler}

It took me many tries to get past the first level. You move left to right in this horizontal shooter to get to the end of an area, avoid or destroying enemies while using shields or weapons in your spaceship in an effort to save your galaxy from an alien menace, in this fun yet challenging science fiction 2D game. As you learn patterns and strategies for each level, they get easier to complete. I avoided groups of ships coming at me from top to bottom as the screen continuously scrolled right.

When you end levels with different power-ups, you earn different passwords. I had played up to an underwater level using digital floppy disk saves, without save states, but I felt it was hard. For those playing on an original Commodore 64 without save states, you will probably need to play on easy if these types of games are hard for you. 4 types of digital media are provided with the digital purchase so that it is more compatible with the hardware of the Commodore 64 mini or other supported platforms. 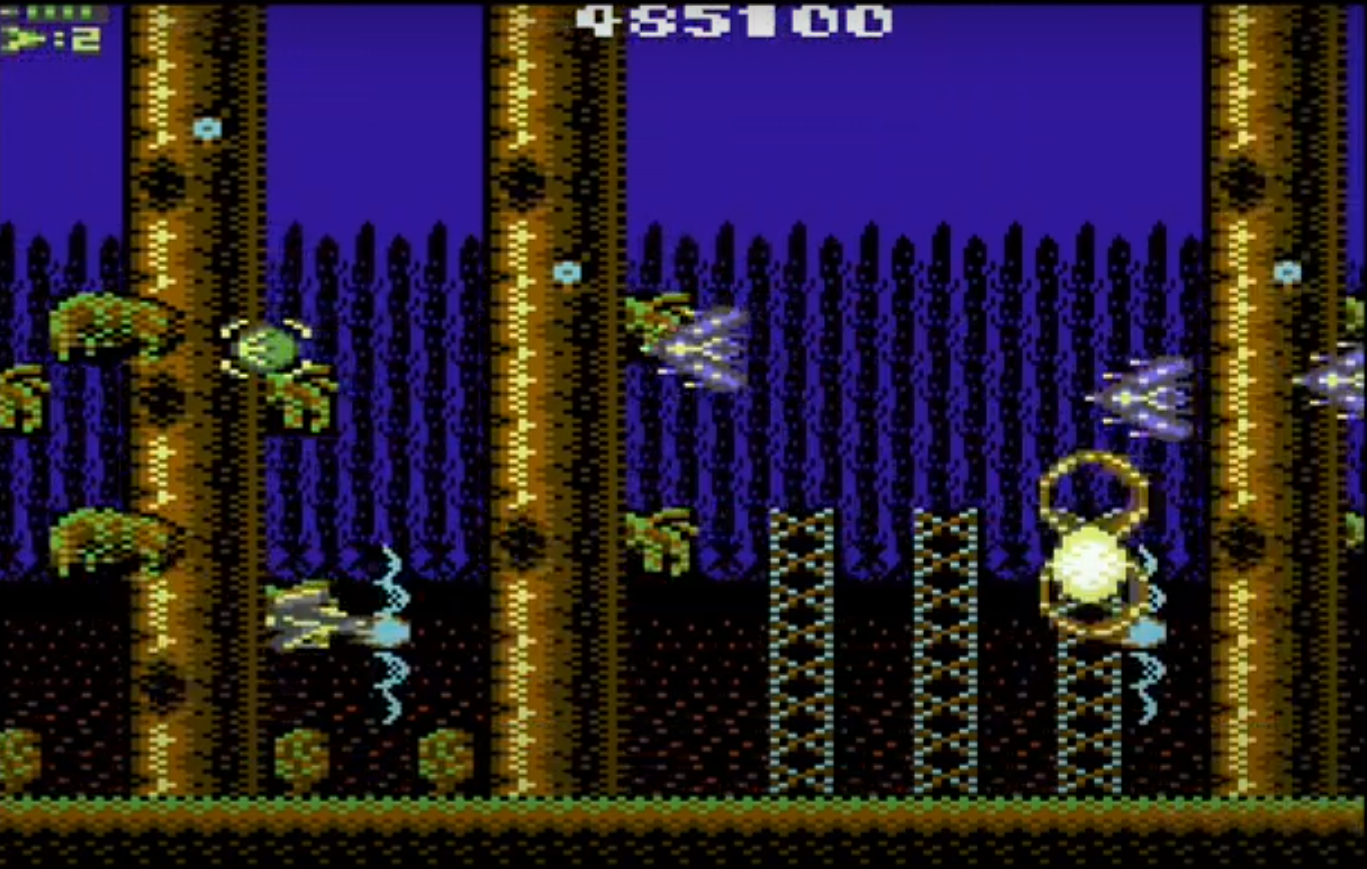 In some stages, you have to pick between one of two paths to fly through, and if you pick the wrong path you crash. A forest level where I had to dodge enemy fighters was really fun. When levels were too difficult, I used save states to save my place when I needed to, instead of having to finish a whole level to save the game progress at the end of level save points.

If you shoot all of one group of enemies you get a special score animation, this can be satisfying. I kept expecting to get a weapon or shield upgrades from destroying groups of foes in a sequence or in groups, you do not in this game. You receive power-ups at specific places in the game, or from specific enemies. Specific levels give your vehicle upgrades. The explosions in-game are animated well, but I was also disappointed that the weapon effects are not very colorful, due to the limit of 16 colors on the Commodore 64. Changing the color palette of the video system added more clarity and vibrancy. The graphical objects are very detailed for being on the 8-bit system. The distorted blur from your guns and the colorful shimmer of your shields are a nice effect. I had hoped to receive and use multiple types of weapons, such as orbitals or other guns that shoot in addition to the main weapon and weapon upgrades as well as the shield, the different effects were nice but not drastic, or game modifying. For one example, The ship had minor changes to its look over time, but the weapons did not create a sense of being able to do more damage to bosses or change the environments in a different way.

The boss's strategies were different often, and it was satisfying to solve the puzzle of what needed to be done and finish the level. During one boss fight, I figured out how to hide behind a ledge to avoid fire.

It is satisfying to see new creatures and environments. From floating seed-filled space bubbles, flying snail shells with guns, disturbing no-armed humanoid statues with rocket launchers for a head, square-shaped doughnuts, and alien creatures that look like fortune cookies. There are also stationary metallic creatures that inhabit the terrain, from multiple missile-firing rail guns to single-shot slingers. I receive three power upgrades to the weapons early on in-game. After I had got past a level I didn’t like, the next few levels I enjoyed. 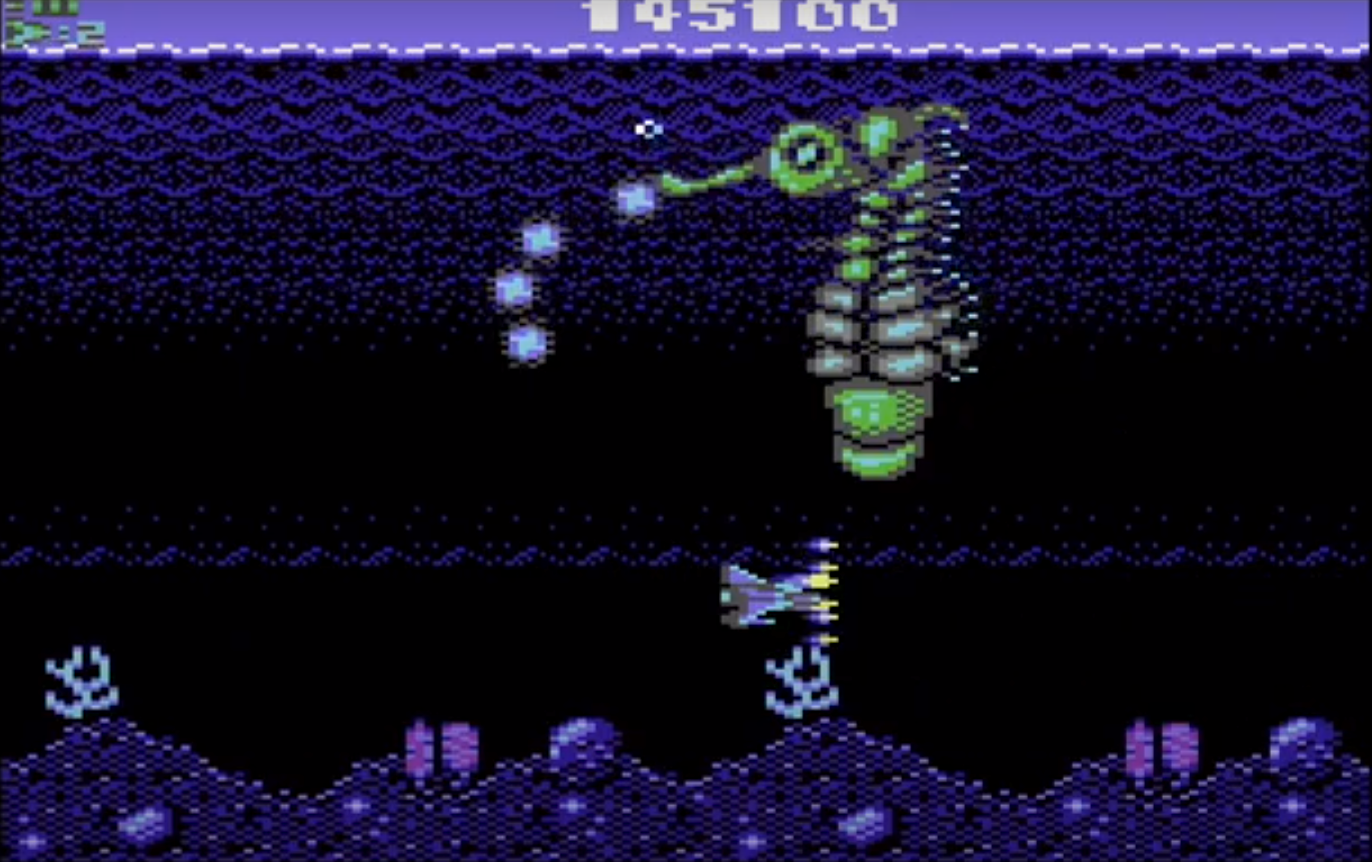 I find it satisfying to try to navigate through the many narrow passageways in these levels and have to be in a hurry to avoid bullets, rocks, debris, and not dying. Levels in this area were like the claustrophobic atmosphere of being in a narrow tunnel in the dark of an unknown maze. I was once fighting a seahorse monster underwater, another time I fought a space crab. On some levels, I could not tell where a wall was until I collided with it.

The sky levels can be fun fighting hordes of enemies in the air or roaming through what looked like the Forests of Endor. It was really challenging to try and discover strategies for a couple of the bosses. You would struggle to find out where to hit them and when to move to avoid damage. As you begin to progress through the game, instead of just shooting bosses to defeat them, you will have to pay attention to their specific patterns and develop a strategy. Each level has different background layers and types of enemies adding to the fun of the game.

This game has minimal morality problems. From a spiritual context, temples are mentioned but nothing else specific having to do with the bio-mechanical enemies in the game, backstory, or otherwise. It can still feel exciting to avoid being shot because you do not have a lot of health. Enemies explode or disappear when dead. In this game normally one hit kills you unless you have shields, this adds to the game’s intensity instead of having a life gauge.

The game feels pretty long. Even though a complete play-through on the internet showed a little over an hour's worth of playtime. I have spent over 10 hours trying to finish the game… After I got used to the high difficulty with save states, this game was enjoyable and is replayable with 4 levels of difficulty and a high score table to challenge.