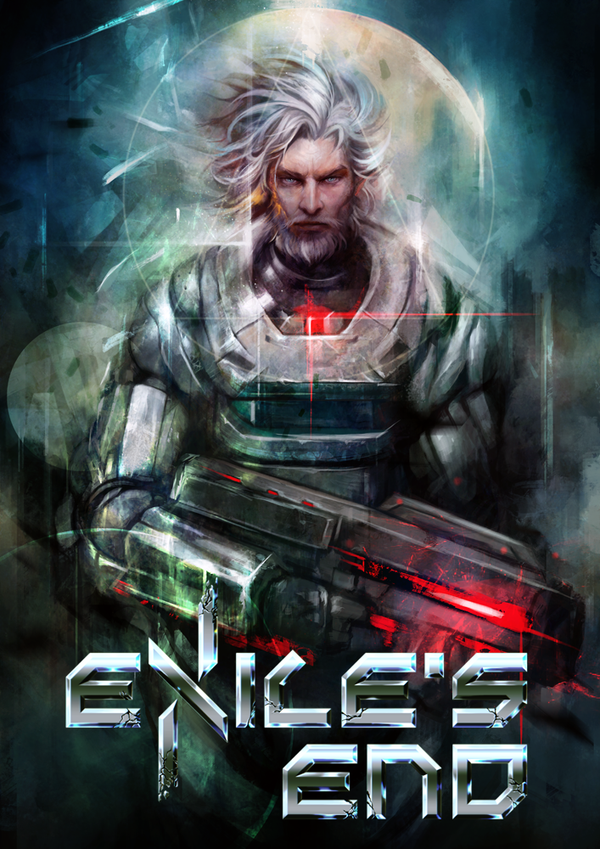 Thank you XSEED Games for sending us both the PS4 and PS Vita games for review!

Exile's End was programmed entirely by one man, Matt Fielding, with some art and music assistance by Japanese veterans, including creators from games like Ninja Gaiden NES, Secret of Mana, and other early greats.  It was his intention to make this game as an homage to early 1990s classics like Flashback and Another World.  When launching this game for the first time, it is immediately obvious that it could have easily lived among games from that era.

This classic look and feel begins right from the title screen.  From the pixel art logo to the fonts used, it screams '90s.  Only the "Online" menu, which contains the cloud save feature (PlayStation versions only) and the online leaderboards give it away.  There is otherwise only one save slot, so "Continue", "New Game", "Survival", and "Settings" are also available.

For most players, the bulk of your time will be spent in the normal game mode represented by "New Game" and/or "Continue".  Despite some rather odd marketing to the contrary, this mode strongly represents the Metroidvania genre fairly well. For those not initiated, 'Metriodvania' is a term of endearment used by fans of the classic 2D Metroid series, and later Castlevania games, which used similar mechanics.  The main features are non-linear maps that encourage exploring, and often include platforming, and various hidden permanent powerups found throughout the map.  These allow the player to access new passages that were formerly locked to them, often via the skills or attributes of their new items.  Backtracking is usually also involved, as those locked areas can often be found earlier in the game than the weapons that unlock them.  This describes Exile's End very accurately. 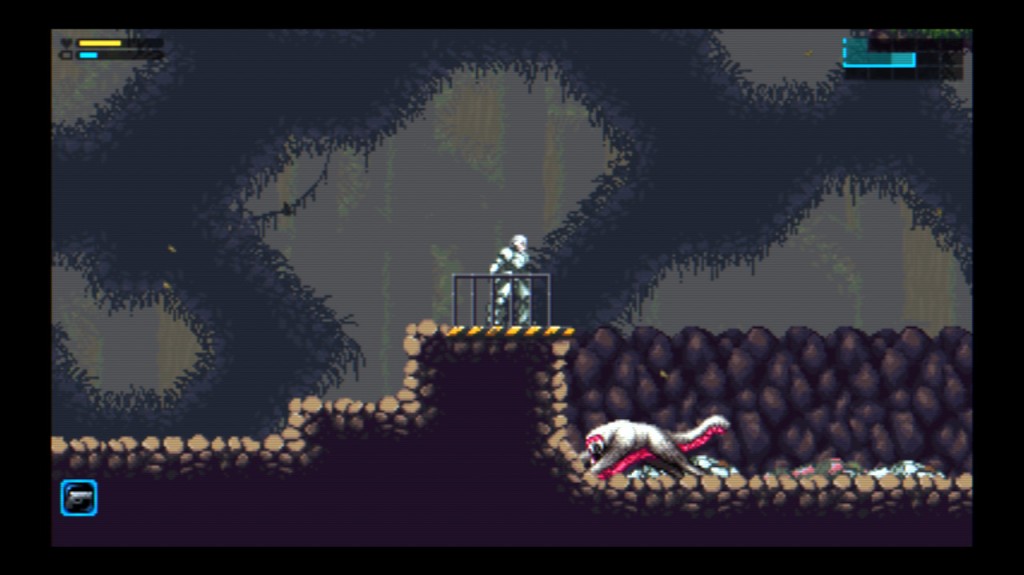 Strong Points: Dark, lonely environment; successful throwback to classic 1990s games; second half of the game is really good; definitely a Metroidvania despite trying to convince to the contrary
Weak Points: Starts off slowly, and somewhat of a chore at first; music is disappointing; pixel art is blurry on Vita or PS TV without old TV filters applied; not sure it excels past its peers in any way; cross save bugs
Moral Warnings: Both aliens and enemy humans die, and sometimes shows blood; lore speaks of a messiah-like figure, with various statues and such; curse words 'd*mn', 'hell', and 'b*tch' used

Exile's End is a 2D side scrolling entrance into the genre, as most of them are. You start off finding yourself exiled (see what I did there?) on a planet, after being sent on a search and rescue mission to find the son of Ravenwood corporation's president.  Once you arrive, your ship suddenly crashes, as well as those of the rest of your team.  Unlike them, you survive, and set out to not only complete the mission, but to get both of you off of the mysterious mining planet you find yourself on.

The plot seemed rather far from surprising, with the game following several common tropes.  There's the alien planet, the aliens on the planet, the ancient religion, and the mysterious powers and such being sought by your enemies.  I would mark that last part as a spoiler, except it's so predictable that you probably would have figured out it was coming as soon as you saw your first hooded statue.

While certainly derivative, it's not a bad game by any means.  It's just not unique in any way.  If you have played a 2D Metroid game, then you more or less know what to expect – minus the morph ball.  Not that this is a bad thing – the Metroid series is one of my favorite of all time.  Just don't expect anything radically different.

The first part of the game is pretty difficult, with the only weapon or tool available to you being a rock.  Yes, a rock.  That is actually pretty unique, in that in most games you have a means of attack even right away.  Rocks can be used to defeat simple enemies like snakes, distract some enemies, or set off land mines. All in all, more useful than expected.  Once you get your handgun, the game really opens up and it becomes a lot more manageable.  But a few too many mistakes can really take a long time to recover from, which is unfortunate, since it ends up encouraging majorly cheesing the save system.

You see, the game automatically saves after entering or exiting each and every room.  There are no save slots either – there's one save and that's it.  Since you have no means of backing out of a choice except for immediately reloading, that's what you end up doing.  If you get hit?  Press start, choose exit, and then continue.  With a five second delay, you have now just re-entered the room, with whatever bad hit you took before having never happened.  It's so easy to abuse, it's… laughable.  While I found a few boss fights difficult, it took an otherwise challenging game and made it almost too easy for much of it.  At least you do have to learn your enemies' patterns, otherwise the reload-continue process wouldn't work too well. 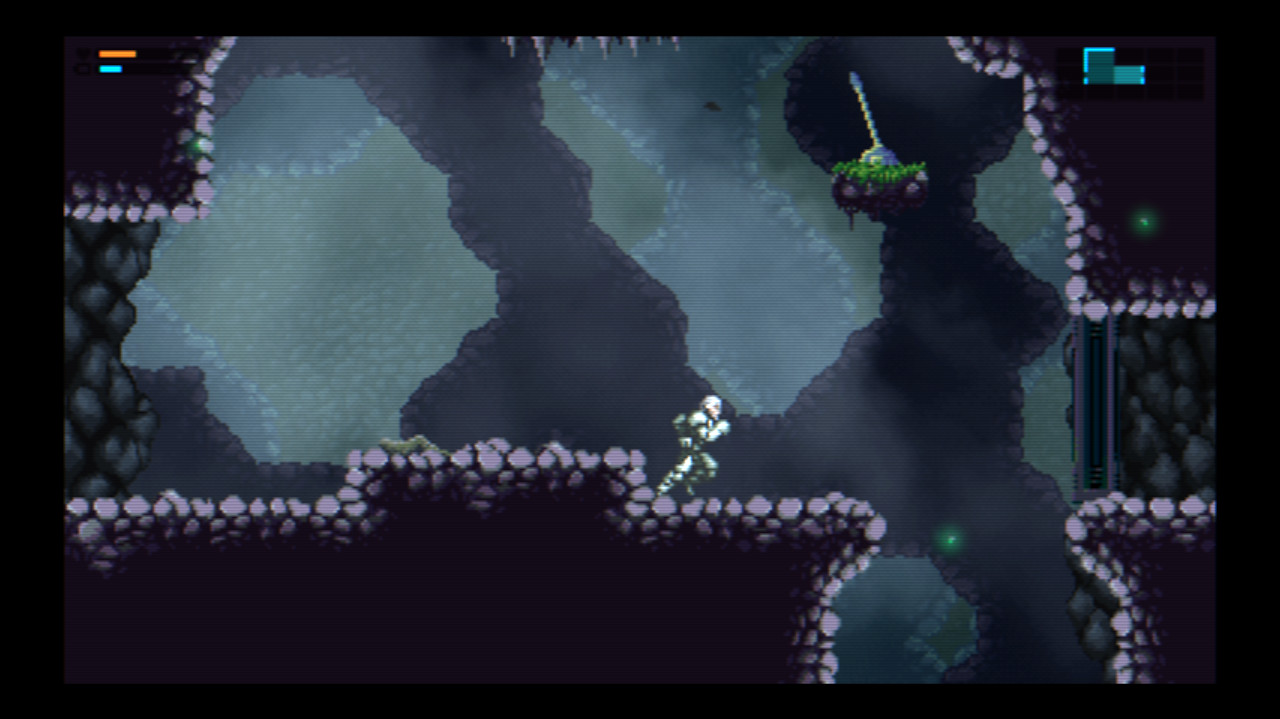 The cross save feature worked perfectly between the PS Vita and my PS TV, but would crash my game when bringing the save over to the PS4 version.  The developer has been made aware of this issue and it will hopefully be addressed in a patch.

Survival mode is a bit different, and unique.  There are many previously generated levels, along with various goals you have to complete in each one.  There is also a time attack element to it, as you have a rather limited time on the clock, and in order to extend it, you have to kill enemies on the screen.  There are online leaderboards to complete with other players worldwide.  It's an interesting mode that seems disconnected from the meat of the main game.  However, if you are looking for a way to be competitive in a game like this, it's a great opportunity for that.

The graphics are almost directly out of the 1990s.  Not that this is bad, but I believe you could seriously convince someone who played games from that era that this game was made back then.  The sound effects do their job, but the music is unfortunately forgettable.  Not terrible, nor great.  As I have heard some of the works of the Japanese artists mentioned, all I have to say is that they have done better work in other games.

On the flipside, the controls are basically perfect.  I have played classic games with intentionally limited jump or weapon mechanics, and that can often be a large source of frustration.  Exile's End has perfect jump and shoot physics.  The character behaves exactly as you expect him to, and when you kneel to shoot lower creatures, you can still execute careful jump dodges as you desire right after getting in that perfect jump shot.  This is definitely an area where the game excels, and it's very important to get that right.  I'm glad it did.

From an appropriateness standpoint, it's fairly typical of a game of that era, with a bit more language used than a typical SNES title.  There is the 'd*mn' word used, along with 'hell' and 'b*tch'.  They are used very rarely.  Since I only completed about 45% of the game, I may have missed other things, but that is what I saw in my playthrough of under seven hours.  There is blood and violence; you shoot enemies who would otherwise kill you.  Both aliens and humans die from your shots or other weapons.  Some enemies splatter a bit of blood, but not all.  There are aliens, and some characters have a bit of an existential crisis in the story.

Exile's End is fun, if a bit uninspired.  If you stick with it, it does eventually get a good hook that encourages you to complete it, but you could easily give up early on and not get far enough to start to enjoy it.  So if you do get this game, commit to sticking with it to get the most out of it.  There are probably better Metroidvania games out there, but there are also much worse ones. It's not a bad game once you get far enough in.  It's just a shame that there had to be at least one lava room escape.  That's one classic game mechanic that I definitely could have done without.