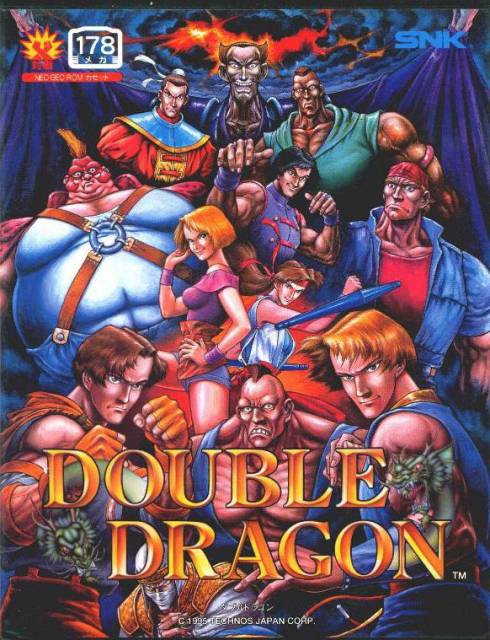 When I think of the name 'Double Dragon', it brings back many wonderful memories of my brother and I pounding the snot out of hordes of thugs, ninjas, and various other bad guys, as Billy and Jimmy Lee set out to save Marian from evil thugs (or take revenge for her death, as it were).  The Double Dragon series played a very important part in the evolution of all games fighting.  But this is not that game.

This Double Dragon is a 1 vs. 1 fighting game, similar to Street Fighter or its many clones (of which this is one).  It is based on a critically disparaged movie of the same name.  In this Double Dragon, Marian is not in distress, but runs a street gang (?) and helps fight crime in the city.  She, along with Billy and Jimmy, are part of a cast of twelve characters, most of whom are unique to the movie.  Your goal is to beat every other character, and finally, the last bad guy, Koga Shuko. 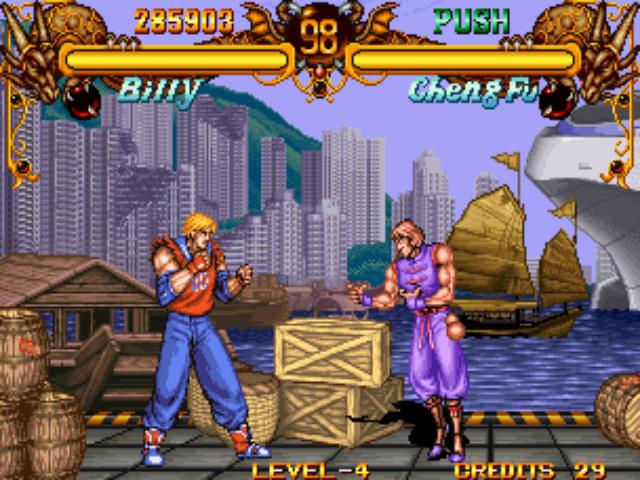 Strong Points: Interesting variation on classic fighter game play; controls work well after getting used to them; this is the first time this version was released outside of Japan completely untouched from the original release
Weak Points: Japanese text for menus and story scenes makes following the characters challenging; not as much variety as some competing fighting games; some moves remind fighting game veterans of other popular franchises; the built-in digital manual was not translated at all, nor is there any translation guide outside of their website
Moral Warnings: Violence (punching and kicking bad guys); One character's fighting style is drunken boxing, and it becomes clear what it is as one of his moves involves spitting at his opponent; one female wears tight clothes while another shows cleavage, though both examples are very tame by fighting game standards

Unfortunately, I had to glean most if not all of the plot elements above from the Internet (particularly, here ) because, being a direct Japanese import, all of the plot text is in Japanese.  There is enough English text in the main menu and during the character selection and fighting screens to allow us English speaking gamers to be able to play the game just fine, but the options menu, memory card menu, and all spoken character text is not.  Interestingly, the narrator (Jimmy Wins!) does speak English.  Thankfully, MonkeyPaw has taken the time to explain the controls and options on this page here.  I just wish that this information was in the digital manual that accompanies the game in the PSN release.

Plot and menu issues aside, the game is remarkably playable for a Japanese import.  Once some of the control issues become clear via the previously mentioned URL, beneath all of that is a pretty fun fighting game.  There is a fair amount of depth in the fighting system.  Instead of punch and kick attack buttons, there are four attack buttons ranging from weak to very strong.  On the character selection screen, a box helpfully shows what the key combinations are for some of the special moves.  There is a counter system, where weak beats very strong, normal beats weak, strong beats normal, and very strong beats strong attacks.  Not only this, but there is a charge system that, once the meter is filled, allows you to perform very powerful attacks.  This certainly allowed me to win a few times where I deserved otherwise.

There are three game modes: Overdrive Mode, Normal Mode, and Tiny 3D Mode.  Tiny 3D is mostly a gimmick, and I didn't find it worth playing.  It just makes the playing field look quasi-3D with multiple planes at various depths.  On a PS1 game this is probably not the best idea.  At first glance, it is very hard to tell Overdrive from Normal mode.  It was not until I read the MonkeyPaw Games web link above that I had a glimpse into the differences.  In summary, it has an improved attack priority system.  Other reports suggest it may play a little faster.  If so, I could not tell.

So, is this game worth the download?  If you are a fan of classic fighting games, particularly those of the Neo Geo style or vintage, I would say it's worth a look.  It's not a bad game by any means, and there are some unique fighting styles represented here.  For example, the drunken fighter Cheng Fu has an interesting playstyle. 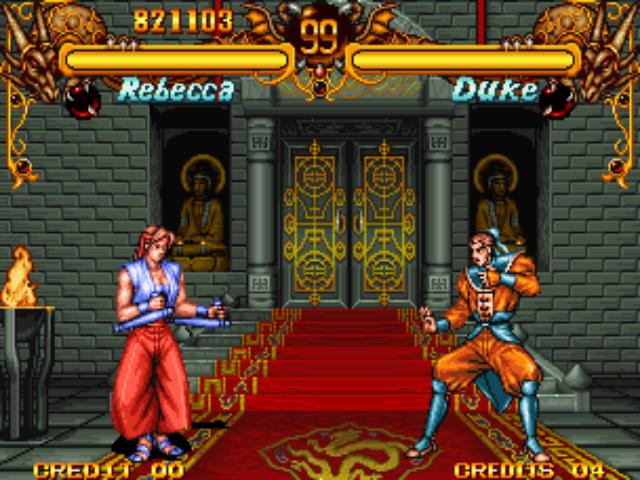 I was also surprised to find that the controls are more forgiving than some more mainstream fighting game entries from the PS1 era.  For example, I found Billy and Jimmy's Street Fighter-like attacks (Ryu's Dragon Punch, Hurricane Kick, and Fireball all have a similar move here with the same movements) far more forgiving on the gamepad than my attempts at executing Ken's similar moves in Street Fighter Alpha 3.  Also, my wife, who sat with me to help me get the perspective of a fresh set of eyes, really appreciated that the special move list is on the character selection screen, where they are nowhere to be found in Alpha 3.  Despite that, she found both quarter circle and charge style moves challenging to pull off.  It's been so long, I forgot how hard those moves can be to someone new.

Like all fighting games, there is violence here.  Your goal is to beat up the person you duel against.  There is no blood or gore.  There is no foul language (at least in English), and while the women are not dressed perfectly, with tight clothing on Marian and cleavage on Rebecca, it is really tame compared to most fighting games.  Cheng Fu does drink alcohol, and appears impaired on screen, with his swaying movements.

Double Dragon is an interesting entry in the fighting game canon.  In a sense, it's easy to forget, given the many, many great fighting games it had to compete with from the same time period.  And it's hardly a good representation of what Double Dragon was all about.  But, it's not a bad game, and classic fighting game lovers may find something interesting here.