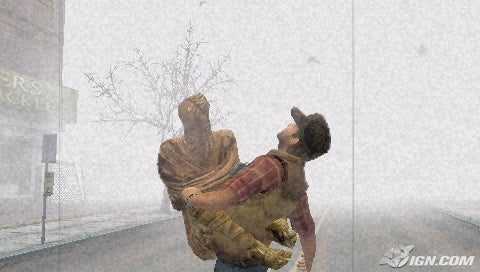 This game has been rated M for Mature (Ages 17 and up) for Blood and Gore, Language, Suggestive Themes, Violence by the Entertainment Software Ratings Board.


Silent Hill. Even the name is chilling.

Silent Hill: Origins really has all of the components that make a horror game: monsters, blood, scary music, creepy locations, a poor combat system…it’s all there. There’s also the blood, gore, and occult themes. Not to mention it’s one extremely scary game.

Origins plays out like your average survival horror game with puzzles and monsters and such. Players take control of a trucker named Travis who narrowly avoids striking a girl on a foggy road. He gets out of his truck to investigate and follows the girl along a foggy road to the mysterious town of Silent Hill. Like the other games in the series, Travis must navigate Silent Hill and its dark structures as he tries to uncover the mysteries behind what happened to this young girl, whom he believes to be a fire victim named Alessa.

On that note, let me say that if Climax did anything right at all in the game, it was the atmosphere and fright factor. Silent Hill has always been a frightening series, and Origins is no different. Fans of the series looking for more terror will not be disappointed. What makes Silent Hill work is the use of tension. Rather than throwing monsters at you from every angle to blast at, or having tons of jump-out-of-your-skin moments, Silent Hill utilizes nonstop, heightened tension that will put gamers in a state of shock, constantly making them guess what lurks around the next corner. Travis can run and use a flashlight, but while doing either will be helpful to his quest, both will alert monsters and make the environment much more dangerous.

Typical to surival horror games, Travis must solve puzzles to be able to obtain clues and advance through Silent Hill. The puzzles in Origins were not overly difficult or easy, and were, for the most part, fun and innovative. One of my personal favorites faces Travis with instructions for pills that are to be matched to cells. There are five dolls, and Travis must use logic and reasoning to figure out which pill goes to which doll (which represent the inmates) after using visual clues within the cells and on the dolls. The puzzles range from trial-and-error, to logic, to math, and offer a refreshing break from the terror.

One ongoing component of the series is an alternate version of the town, called “Otherworld”, which is a bloody, decaying world with disturbing disembodied sounds and many more monsters. Things in Otherworld are different: some doors may be unlocked that were previously locked, and items will appear that were not in the normal Silent Hill. Travis can freely travel between Otherworld and the normal world whenever he comes across a mirror in Silent Hill.

Unfortunately, much of the game involves some degree of trial-and-error. At least half of the doors you come across in the game will be either blocked or locked, but you must also search every nook and cranny for items and keys. Much backtracking is involved, and gamers not used to such a thing will quickly get frustrated. While Travis is a better fighter than the other protagonsists of the series, he still has just enough ineptitude to make combat very frustrating. Unless you have plenty of weaponry, expect to die a lot. There’s an interesting little “grapple system”, where an enemy latches onto Travis and an onscreen button sequence must be entered to escape, but apart from that the system is little more than pressing R to lock on and X to attack. It’s simplistic but somehow still manages to be tedious.

You’ll be hard-pressed to find a better-looking game on the PSP system. Shadows, great lighting, reflections, and all manner of rust, mold, blood, and decay do the handheld proud and I honestly feel that they exceed what I thought was possible on the system, especially as it moves at a steady frame rate. The presence of enemies brings up a neat static effect on the screen. The character models could have used a little more detail, but the package as a whole is simply phenomenal.

This is what really makes the game. Akira Yamaoka provides a genuinely frightening and wholly excellent soundtrack made up echoing strings, loud throbs, and sudden, startling chords. Without the music, the game isn’t half as scary, and the game even recommends turning off the lights and putting in headphones (it makes a world of difference) The wails of the monsters are great and very chilling. Voice acting is excellent, and other sound effects such as clanging, footsteps, static, etc. are spot on and contribute a frightening sense of realism to the experience. It will really keep you on the edge of your seat.

Guiding Travis through the halls feels a tad sluggish, especially for the sprint button, which takes about a second to actually initiate the action. It may not seem that bad, but it makes a great deal of difference if you choose to run rather than fight and every second counts. This is unmistakably a design decision, since most of the other controls are very tight and responsive, but it is inconvenient nonetheless. The other area where control falters is the combat. Like I said before, combat simply isn’t good, and I eventually found myself running more often than staying to fight and put up with the sluggish combat system.

No complaints here. Origins ran well, never crashed, and seemed to be completely bug-free. Load times are very nice. There is a more sizeable loading screen each time the game starts up from the PSP's main menu, and there is about a five-second load time every time Travis goes through a door, but overall the loading is very manageable considering the quality of the graphics. I noticed maybe two instances of slowdown, and both times were when there were several enemies onscreen at once.

It seems that these days, the survival/horror genre is synonymous with the word “inappropriate”.

Travis will run into a lot of demonic creatures during his stay in Silent Hill. He can use objects that he finds around the town, such as tire irons, hammers, and guns, to fight the enemies. These battles result in sprays of blood that pools around bodies and can be tracked across the ground. Some environments are splattered with blood and there are a couple of extremely violent cutscenes. Enemies are very grotesque and disturbing.

-Minor swear words used throughout the game (-2.5)
-Sexual references are made once or twice (-2)

Travis uses minor expletives to express his frequent shock. The game shies away from strong language. It is implied that two characters had sex, and Travis makes a joke over the radio about his loneliness.

The nurse that Travis runs into multiple times throughout the game, Lisa Garland, is dressed in a somewhat short skirt and a top that shows some cleavage. Since the enemies in the game represent various inner demons that Travis has, the nurses are in turn seemingly representations of his repressed sexual desires, though this is never truly confirmed within the game. Likewise, another enemy is a different representation of this, but it is never explicitly stated within the game and as such interpretations of such enemies are left up to the player.

Silent Hill is a town that houses a major cult. References are made frequently to this. It is suggested that the cult is behind the evil in the town. Without giving too much away, I will say that late in the game, there is a very disturbing ritual involving a new god and a split soul.

-No authority issues
-No bad-value decision-making
-No gross humor

-Shows the consequences of evil and messing with the occult (+3)

Despite the powerful presence of occult themes in the town, the practice is certainly not condoned, and the consequences of dabbling with occult magic are made clear.

Silent Hill: Origins achieved what its developers set out to do. It is well designed in that it is extremely chilling and keeps the series at its place as one of the scariest game franchises out there. Fans of the series and anyone looking for incredibly taut horror will not be disappointed. However, there is a good chance that discerning Christian gamers will be.