Parappa the Rapper quickly became a cult classic as one of the first rhythm games around when it was released on the PlayStation in 1997. Parappa would later usher in a generation of wannabe Guitar Heroes and pantomiming Rock Bands trying to recreate the feeling of performing on stage. Now, over a decade later, you can relive the original rhythm game that started it all with Parappa the Rapper for the PSP. For those familiar with the series, you won’t find much new here. The PSP version is a direct port, but has added multiplayer and song remixes. Unfortunately, the song download link doesn’t seem to work anymore. Another downfall is that some bugs from the PlayStation version remain.

The game starts off with Parappa, an adolescent dog, who likes a girl named Sunny. He wants to impress her by getting his driver’s license, baking her a birthday cake, and becoming famous. There are six levels and each stage has a movie to set the stage. When Parappa is faced with a challenge he’ll have to rap his way out of it. No matter what comes his way he has a positive attitude and his catch phrase is “I gotta believe!”

While the gameplay concept is simple, it may take a while to get the hang of it. The goal is to follow the pattern of the character rapping with Parappa. You’ll have to press the buttons in time with the song. You’ll see suggested buttons to press but you’re welcome to freestyle as much as you like. The important thing is that it has to be in rhythm. Depending on your abilities, your raps will be rated as Cool, Good, Bad or Awful. In order to complete a level you’ll have to end with a good or better rating. 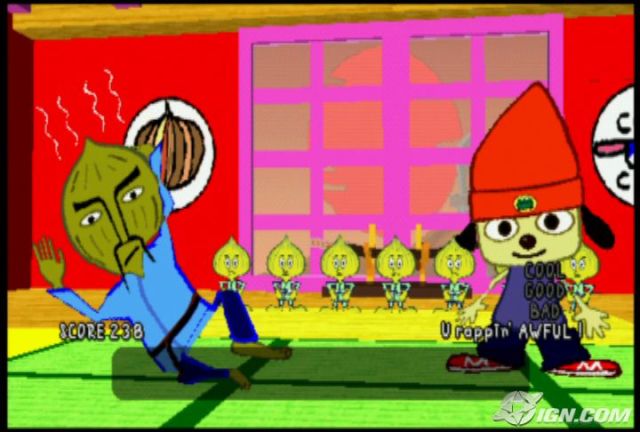 I was able to beat some of the levels in a few tries but a couple of them are pretty brutal. It took me a while to complete the fourth and sixth stages. Since there are only six stages, if you’re talented, you can have this game beat in a single sitting.

Once you beat all the stages, you can challenge your friends to a match as long as they own the game. The multiplayer uses the same levels as the single player campaign. The game play isn't much different other than comparing your scores at the end to see who is the master rapper. If you know someone who wants to try the game, you can use game share and send them the first level to play.

The graphics are definitely unique with bright colors and flat cookie cutter style animation. The in-game movies are entertaining and give the characters some depth. The game’s animations vary depending on how well you are performing. The characters get agitated and do funny things when you’re rapping poorly. For example, the birthday cake level has you following the instructions from a cooking hen. If you mess up too many times, her face will turn red and she'll lay an egg. 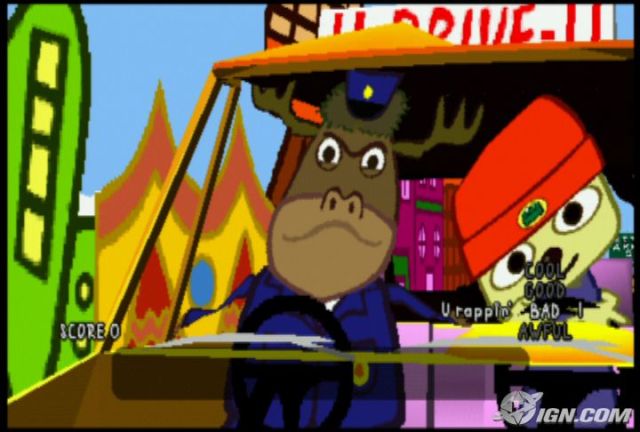 Parappa’s rapping sounds good if your timing is spot on. Since this is a rhythm game the sound has to be top notch and Parappa the Rapper does not disappoint. The songs are well done and get stuck in my head. Each song is unique and has different singers and styles varying from reggae to rap. The menu sounds are repetitive and annoying at times.

While this game is family friendly, there is some toilet humor. One of the levels involves Parappa making it to the bathroom in time. If you don't make it, you'll see his face turn green and a movie clip of rockets going off in his body.

Overall, Parappa the Rapper is a cute but frustrating game. Nailing some of these songs is annoying but rewarding at the same time. If you beat every level with a Cool rating, you get an extra unlockable scene. While the character development and songs are solid, this game's lack of longevity and a few glitches make me glad I didn’t buy this game new. If you haven’t played this game, I would recommend getting it used or on gamefly.