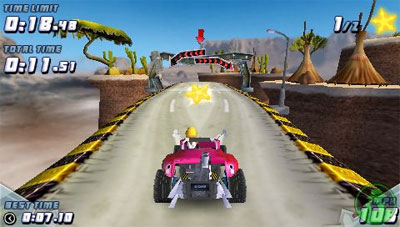 One of the most interesting new games to hit the market, GripShift blurs the genres of racing, platform, action, and puzzle games. This unique hybrid is all wrapped up and package for you to enjoy on your PSP.

I picked up this game, and within 5 minutes back hooked into it. The concept of the main game is to drive from the start of the track to the end of the track as fast as possible. You have an overall time you have to finish by in order to progress, and then you have a Gold, Silver, and Bronze metal times you need to complete the course in, if you want a reward. In addition to getting rewarded for finishing in a medal time, there are stars placed in many places around each track. So, for almost a seperate way to race the track, instead of racing to get a medal, you could slow down slightly and go for the collect-a-thon method of beating the track. Many of the games 100 tracks branch so that both tasks cannot be done at the same time, so you have to play each track over twice to fully complete it. Now, if you\'re thininking all of this is done on a typical race track, with your typical cars, you\'re porbably thinking this is really boring. However, the tracks in GripShift look more like a level from Super Monkey Ball, then your typical oval. Tracks are suspended in the air, with frequent jumps, making you feel like half the time you\'re flyin instead of driving. Tracks are filled with all kinda of death traps, from elephants to magnets, some tracks aren\'t even roads, but collections of islands with jump pads connecting them. The physics of GripShift is also what makes it unique. Things like being able to break in the air, and using your boost in the air to totally change directions, make this game unlike any racing game, and more like a puzzle game then anything else. There are 8 mini-games included, like Penguin Bowling, Bomb Pool, and Ice Hockey, which provide a nice diversion from the main mode. Also, the entire game is not entirely track/puzzle play, there are actual races with other cars, (with a small selection of power-ups avalible to enhance the racing experience) which is a goodway to be able to mix up the gameplay some, so when you\'re working through the sometimes tedious puzzles, you have something else to do. The only complaint I have with GripShift is the difficulty of the puzzles at the end of the game. The insane levels really could have just been called the impossible levels, they end up just being annoying rather then an enoyable challenge.

GripShift is a graphically stunning game. It\'s bright vibrant and settings, as well as it\'s hanging in mid-air look add a huge amoun to the immersion the gamer feels while playing. Even the included level editor allows for your to create stellar looking tracks, with loads of scenery, different worlds, and different backgrounds. The boost effects give the game a great feeling of speed, and camera movents that make the levels feel about a massive as they are.

The sounds track from GripShift was hip and upbeat, giving quite a bit of style to an already funky game. I would have liked to have seen a few more songs on the play list however. I felt like there were only 5 songs on the play list, so in combination with repeating levels because of mistakes, the shorter play list makes the game feel a bit repeditive some times . Sounds effects were great, menu sounds like disc scratching helped give this game a truly unique feel.

GripShift ran perfectly on my PSP. Never froze. The load times were pretty reasonable for a PSP game as well.

Sigh. Here is the only point GripShift suffers. If you look at the controlls as an added element to the gameplay, then you can add a point to this section of the scoring. Handling of cars was quite erratic most of the time. There are several different cars in the game, each with completely different feels to them, so eventually I just got used to the way that car felt. However, some tracks are nearly impossible to beat with one car, and are easy to beat with another. So, not wanting to spend forever learning the difficult nuancies of the different cars, I just stuck it out with the car I was use to. The crazy handling does add to the overall crazy feel of the game (it take awhile to get used to breaking in the air) but I still think this area could have been improved. Current Game Points 42.5/50

Foul Language - Minor Swear Words are used once or twice -2 pts Things like He**a tight are said every now and then. Sexual Dialogue/Innuendo - No sexual dialogue. -0 pts

Authority - No authority issues involved with this game. -0 pts Prejudice - No prejudicial bias in the game. -0 pts Gross Humor - No gross humor in the game. -0 pts GripShift is an entirely unique gaming experience that can\'t really be found anywhere else. (the closest thing would be Super Monkey Ball) It may take a little bit to get used to the controlls, but once you do you\'ll be rewarded with one of the most fun games I\'ve played on a handheld.