Thank you Anuman Interactive for sending us this game to review!

Red Riding Hood – Star-Crossed Lovers adds an interesting twist to Charles Perrault’s classic tale.  In this story the werewolf, Grey Shadow, has feelings for Red Riding Hood and wants to protect her from his brothers who want to eat her. She is willing to run off with him, but only if her sick grandma tags along as well.   Since Red’s grandma is bed-ridden they must locate a healer and reagents to cure her.

In order to progress the story, several items must be located in still images to find a specific item in the end to add to your inventory for later.  Most of the items are pretty straightforward in locating, but some of the items were not very intuitive and I had to rely on the built in help system to help me locate them.  For example I found three out of four flowers but I couldn't find the fourth because it was the club symbol from a deck of cards. The helper requires recharging before it can be used again.  Also, you cannot just tap randomly as the werewolf will growl at you and prevent you from tapping for a couple of seconds.  Your goal is to locate all of the objects quickly so every second counts! 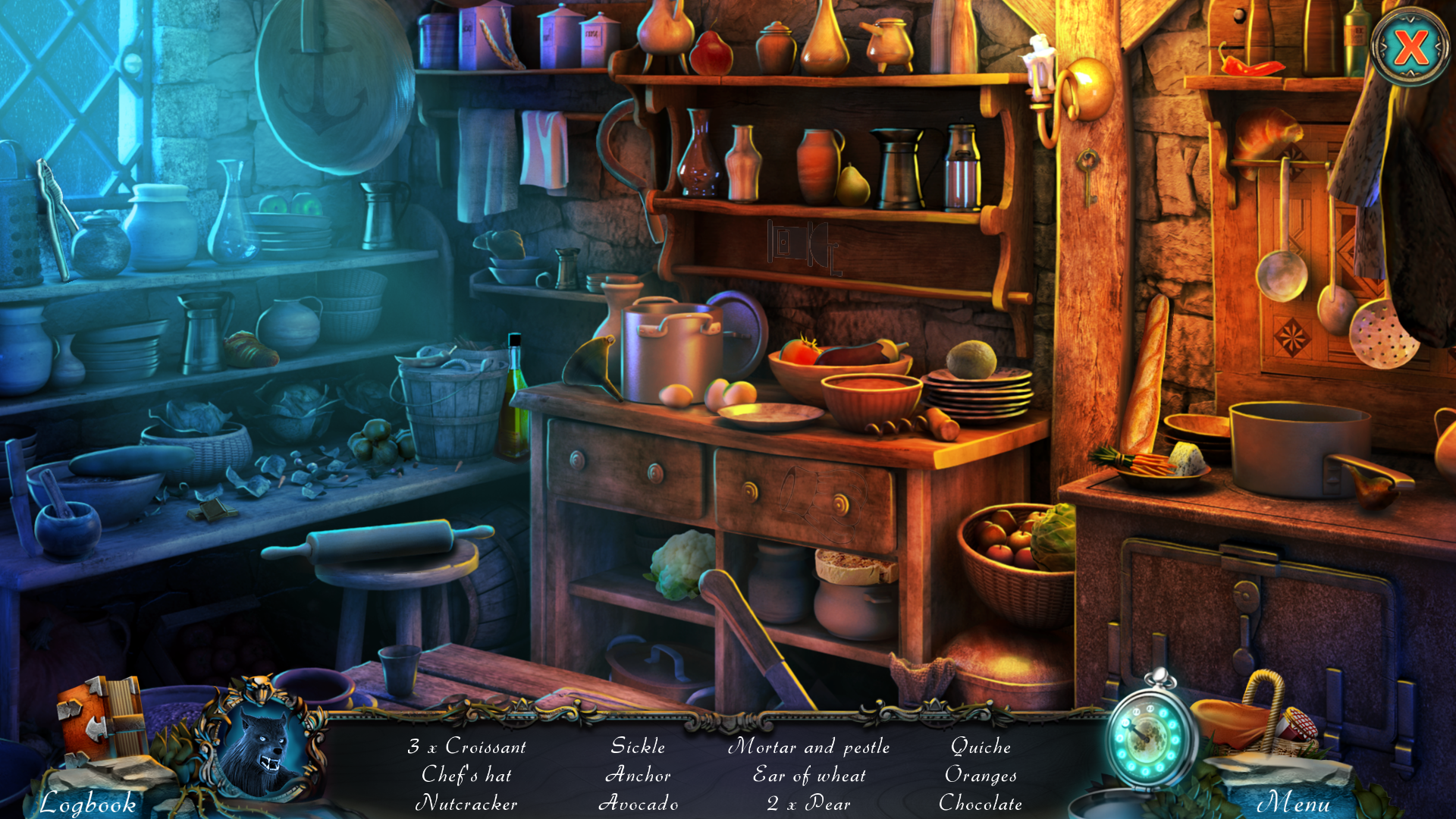 Most of the time the required objects are in plain sight, however sometimes they require wolf vision to be seen.  Some objects are not really objects, but decals or engravings instead.  Often you’ll have to find multiples of a particular item in the same puzzle.

Besides hidden object puzzles there are some mini-games to mix things up a bit.  Many gamers will be familiar with the classic piece together the torn up note game or “Memory” to match up various symbols.  Some of the puzzles like the lock-picking or rescuing Red from an animal trap I couldn’t figure out right away. Fortunately, I was able to skip past them after some time. 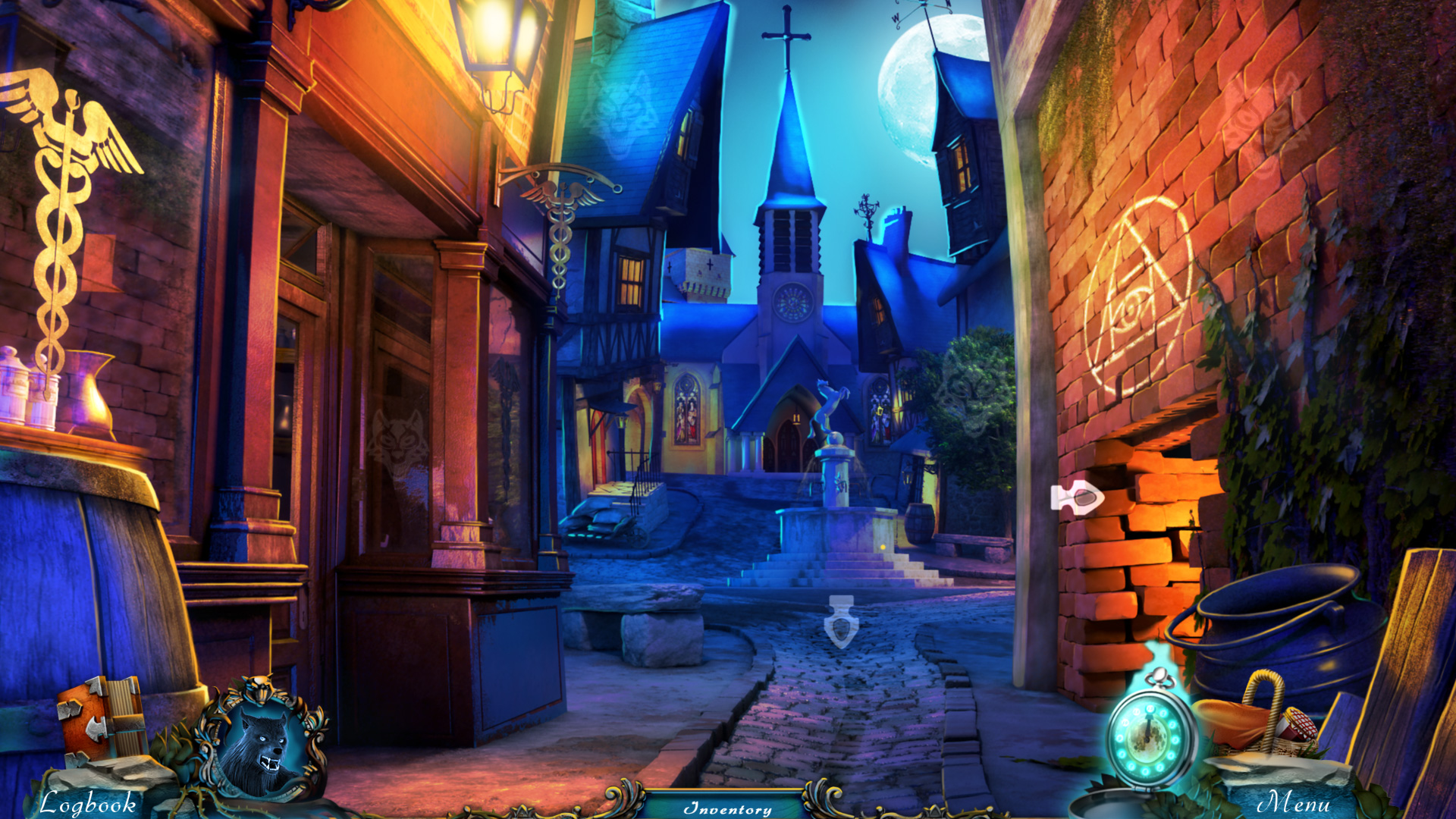 Unfortunately, some of the hidden objects I had to locate were occultish in nature.  For example, I had to find a pentagram and a deck of tarot cards.  Despite the game’s title the romantic elements of this game are pretty tame.  In the beginning of the game Gray Shadow is shirtless and one of the first hidden object puzzles involves finding a tunic for him to wear.  To progress the game's story, breaking and entering into people's property is required.  Last but not least, there is some cussing from the lumberjack who has feelings for Red as well.

Graphically this game is very colorful and the puzzles are definitely challenging.  I was able to beat this game in less than two hours and it encourages replays with beating your previous times.

The background music is pleasant to listen to and is soothing to hear while squinting to find various items. There is a fair amount of dialogue, but none of it is voice acted.  This game is over 600MB so make sure your device has enough free space before purchasing it.

The price is around $5 on Android and $9.99 on iTunes.  It’s hard to recommend due to its short amount of gameplay.  Because of the language, I wouldn’t buy it for children either. There are plenty of free child-safe alternatives out there.