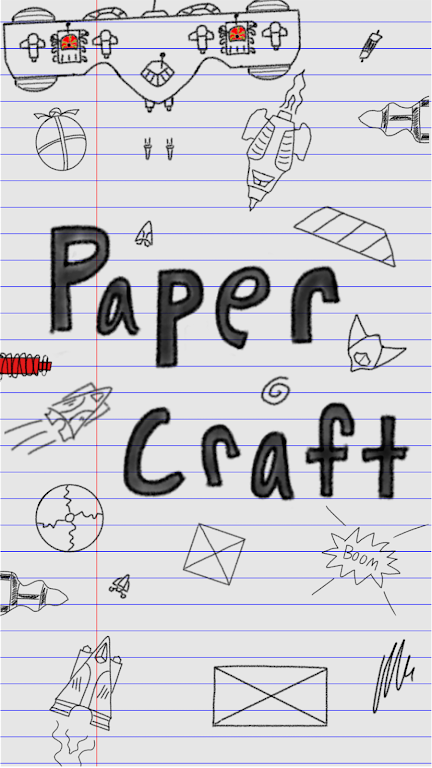 Thank you, 4:8 Games, for sending us this game to review!

Paper Doodle Craft is an “endless rocket doodle racer.” The player must move their “doodle craft” to dodge obstacles while tapping the screen and certain enemies to fire bullets or missiles in order to destroy them. The level speed starts slower but gets faster until the player’s craft runs out of lives (represented by four tiny rockets in the top left corner of the screen). Upon that happening, the player must restart the randomly generated level, but any “squiggles” (the game’s form of currency used to purchase new canvas backgrounds, power-ups, or even craft ships) they collect will still be added to their collection.

Squiggles can be found floating throughout the level, and are often dropped by defeated enemies. They can be used to purchase the four initial crafts, each with their own unique speed, recharge, and energy statistics, or the four initial canvas backgrounds available: notebook paper, old parchment paper, grid paper, and concrete sidewalk. Common obstacles include lasers, moving boxes, and sometimes other crafts that fire back and drop squiggles when defeated. Most obstacles can be destroyed by being gunned down, but certain things will hold their ground. Strong Points: No in-app purchases or advertisements; new themes and content added every week
Weak Points: Not a whole lot of audio, no multiplayer, limited options when it comes to what to do in the game
Moral Warnings: Bullets/missiles involved in game

Not all obstacles are perilous, either. Crates and rare “party balls” will leave power-ups or extra lives when shot, which turn out to be very useful for the player. Some power-ups offer invincibility, while others provide more destructive ammunition for the craft.

The controls are extremely simple, and are shown before each round (there is the option to not show them again as well). To play, the player must tilt the screen to move left and right, and he or she can tap anywhere on their screen to fire bullets or missiles in front of them.

New themes and content are added to the game every week, and players can get involved in it, too. He or she can create their own doodle craft to be placed as the “featured craft” of the week with their name and the country he or she lives in, with these featured crafts being playable by everyone. Everything in this game is visually portrayed as having been drawn on paper with a black marker (Not that colorful of a game). I find it cute that way, making it seem innocent and adorable, albeit it is slightly sloppy (very legible, though, of course).

Audio seems almost completely absent in Paper Doodle Craft, as a decent number of mobile games don’t have background music. Though Paper Doodle Craft bears the absence of music, it has some sound effects, which show themselves when they lose all of their lives, fire a bullet, get hit by one, collect a power-up, or equip one. The quality of these sound effects is decent, and they match the cuteness of the art style, which I find kind of cool.

As far as I can tell, I do not need to report any moral major warnings. In fact, when the game launches, a verse from the Holy Bible pops up, which I think is delightful. That is but one of the reasons I would recommend this title to anyone in search of a fun mobile game that doesn’t take up much space on their device.