Thank you Coatsink for sending us this game for review!

In the endlessly expanding casual game market for phones and other devices, there is a resurgence of games that help you chase the highest score you can.  One of the newest entries into this genre is Fatty.  Here, you play the role of a rather large blob of cellulite on whom a young lady attaches herself.  You try to escort her to safety, though ultimately, tend to leave her to fend for herself after your many, many deaths.

You see, the hero, Fatty, cannot survive if not kept as plump as possible.  If fed healthy food, medicine, or any kind of poison, he is shrunk to a less plump creature, who will eventually die of starvation if not constantly fed all of the yummy food available.  These include sweet and fatty foods like pizza, ice cream, fried chicken, candies, pastries, and many more.  The dangerous healthy foods include broccoli, carrots, or other unpleasant vegetables; also, diet pills can be a real killer.  And there are also poison spots to avoid.  They can be barely survivable if you are really plump, but they pack a real wallop. 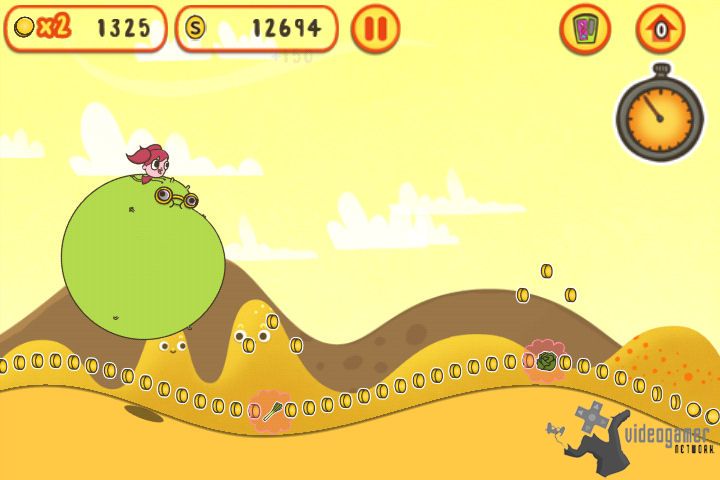 Strong Points: Cute graphics, simple music/sound effects, simple and yet fun gameplay
Weak Points: In-app purchases which lead to no permanent power-ups; black bars on each side on widescreen devices
Moral Warnings: Rude noises; squashing buildings and animals with your substantive girth; teaches healthy food is bad; bones and skeleton with a puff of smoke when you die

To play this 2D side scrolling endless runner, you simply bounce your large body from the left to the right.  If you touch the left side of the screen, you come crashing down vertically.  If you touch the right side, you also come down quickly, but with a bit more forward progression.  It is in this way that your flubber bounces off of the ground, to be propelled into the air to hopefully find the next tasty treat.  There are also coins, power-ups, random creatures, and of course the rather unpleasant poison, and nearly as poisonous healthy food.

Power-ups include the super bounce, which can help reach those super-high treasures, and pass right through the bad stuff.  There is also a jetpack, which unfortunately lasts far too short, a vending machine, which you can spend coins you collect on some tasty treats to help plump you up if you are low, or my personal favorite, the glasses.  This power-up makes it so that you run along the ground, picking up many power-ups (or potentially, food that hurts you) while jumping to avoid the parts you don't want.  The reason this is so nice is that often, good food is scarce, and this power-up can be the only source of health you have left.  It can be a real life saver.

Coins are used as in-game currency.  You can spend them during a level in the vending machine using coins you picked up along the way.  You also get to keep any you don't spend, and spend them on power-ups in between levels at the shop.  Unfortunately, they are all temporary power-ups that show up when you start a level, and are gone after that.  If you find that you want more, and you already spent all of the coins earned in-game, you can spend real money to buy more coins with in-app purchases.  Instead of offering a deeper play experience with more strategy, they opted for additional monetization.  I consider it a real missed opportunity for a potentially much better game, with a sense of progression, by offering permanent upgrades instead of just one-time buffs that you can buy over and over. 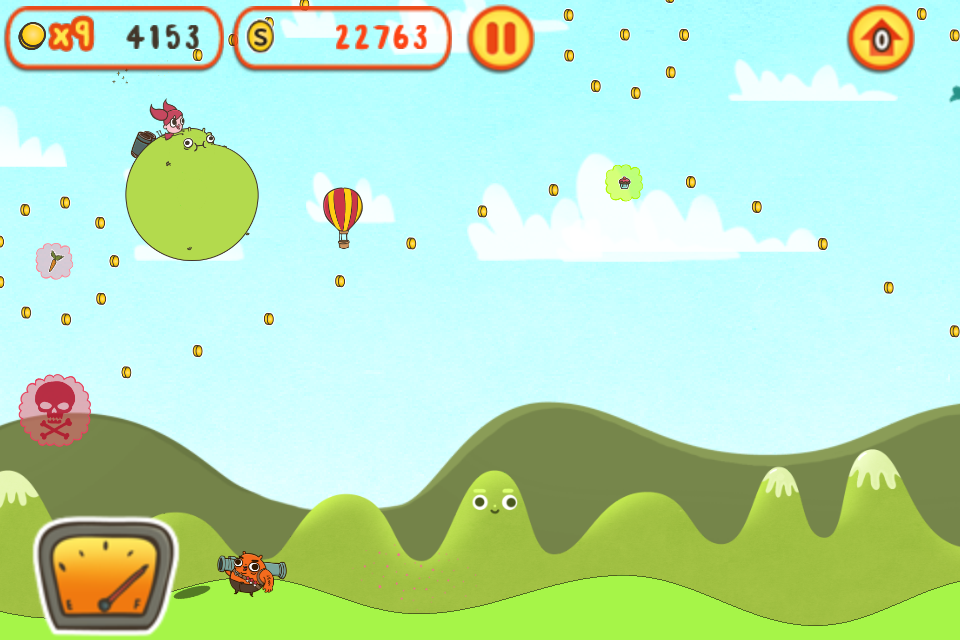 I have a few small technical complaints.  I was a little disappointed when I noticed that iOS must have been the primary platform because it did not fill my full screen on my 16:10 tablet; there were black bars on each side, indicative of a 4:3 target screen aspect ratio.  Android makes screen resolution independence trivial, so only an iOS ported app would do this.  Unfortunately, those areas do not even trigger as presses, so you have to touch a 'colored' area to activate Fatty's drop.

Fatty is a fun, if not simple, game.  My kids really liked it, though with its many burps and other rude noises, I had to explain to my young ones that this behavior was not appropriate.  You also crush buildings, trees, and other random creatures.  And, if it's not already obvious, it depicts healthy food as harmful, and unhealthy food as good for you.  It is all presented in a silly, cartoony way.  When Fatty dies, there is an image of him 'giving up the ghost' - a puff of smoke arises out of him, and his skeleton disintegrates before your eyes, with the girl left standing.  Mostly harmless.

And that's what I think of Fatty: a mostly harmless game, which is fun, and much more challenging than you would expect.  It also could have been much better.  Despite marketing material which equates achievements with game modes, it's really just a simple game, with a single play mode.  But it's fun, for as much as you enjoy trying to get that high score.  And it wouldn't surprise me if you spent more time trying to get that score than you ever anticipated.