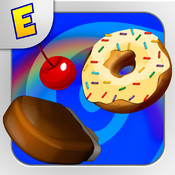 Thank you Ensenasoft for sending us this game to review!

Ensenasoft prides themselves on making fun and educational games for people of all ages.  While Dessert Storm isn't educational, it does fall under the fun category.  There are three game modes including a classic, relaxed and a rush mode.  The classic mode has twenty one levels that get gradually harder as you complete them.

The goal is to match three similar dessert items either vertically or horizontally.  After every tile has been matched up at least once, the level will be completed.   After you beat the level you'll be scored on how much time you have left on the clock.  If time runs out beforehand, you'll have to restart the level from the beginning. 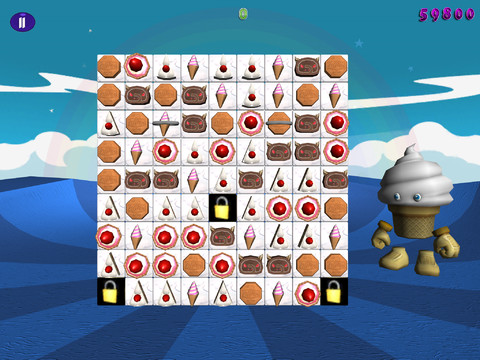 The classic game mode gives you a decent, but limited amount of time while the relaxed mode has no time limits. In rush mode you have to keep making successful matches to add times to the clock.   You'll soon run out of time if you take too long looking for moves.  Don't expect the pause feature to buy you any time as it will cover the game board while it's activated.  The longer you survive in rush mode, the higher your score will be.

I spent most of my time playing the classic mode as it is a happy medium compared to the other two modes.  I liked the additional challenges of the locked tiles that could not be used or the stuck tiles that would be not available until two or three matches were made.  Some of the board shapes were challenging as they had spaces giving you less space to move the tiles around.  I like how this game shuffles the tiles automatically if there are no more moves available.

There is plenty of variety in the sweets to match up.  You'll see various flavors of ice cream, cookies and slices of pie.  While Dessert Storm isn't as flashy as other matching puzzle games out there, the graphics get the job done. 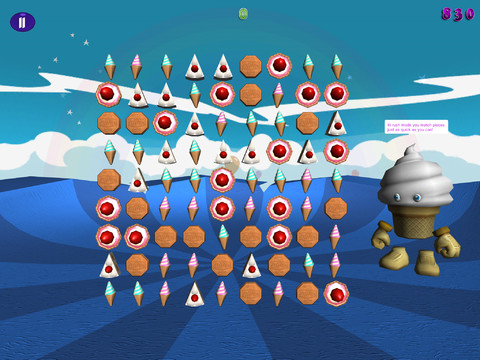 I was a little disappointed with the controls though.  They're not as responsive as similarly styled games out there.  It's quite frustrating to intend to make a certain move only to have it not register and a different move entirely is made instead.  This happened to me several times so it's not uncommon.

While my kids were not attracted to the game's looks, they did laugh at the “Ice cream!” shout made when clearing a level. The background music is pleasant to listen to and the other sound effects fit in nicely as well.

Dessert Storm sells for $1.99 which is reasonable.  There is a free version that is limited to the first seven levels.  I would recommend checking that out first and seeing if you like it.  After you beat all of the levels you can either improve on your scores or test your speed in the rush mode. I'm curious if they plan on releasing level packs for the game.