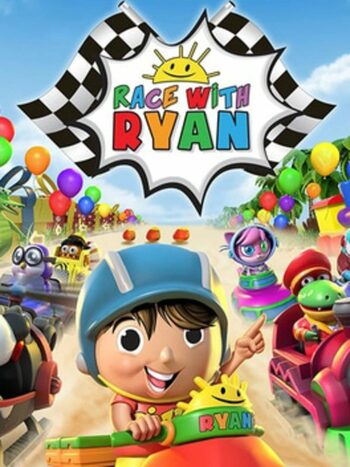 Thank you Outright Games for sending us a review code for the base game and DLC bundles!

Ryan’s World is a popular YouTube channel with over twenty-seven million subscribers. Like the channel, this video game features Ryan and his parents. Some animated characters including Alpha Lexa, Big Gil, Combo Panda, Gus The Gummy Gator, Moe, and Peck the Penguin are happy to race against you as well.

Upon launching the game, you can decide to do a quick race, random race, career mode, or learn to play. I recommend starting off with the tutorial so you know the controls. If you've played a kart racing game before, the controls are easy to remember; they're perfectly suited for younger audiences. The A button accelerates while the B button brakes and puts the vehicle in reverse. The right trigger will drift and the left trigger uses any special items or honks your horn if you don’t have anything in your inventory.

By completing various cups in the career mode, you’ll unlock new characters to drive as. Each cup has three races to compete in and you earn more points based on your finishing position. The racers with the most points will win the gold, silver, and bronze cups respectively. There are three levels of difficulty: Easy, Medium, and Hard.

Strong Points: Easy controls; nice cartoon animations
Weak Points: Not many tracks in the base game; Some of the race tracks are confusing and you can get turned around and lose the race as a result; cringey voice-overs
Moral Warnings: Ghosts are present in the Spooky Land race track

Playing against your family and friends is also possible in the split-screen multiplayer mode. Up to four players can race together. If you don’t have anyone to play against, the AI racers will give you a good challenge.

Race with Ryan has the typical fare in kart racing games. There are speed ramps along with offensive and defensive power-ups. Driving through orange eggs will give you loot, and you can only carry one power-up at a time. Be wary of pinkish eggs as they are explosive traps deployed by your opponents. Other things to avoid are tennis balls, soccer balls, glue, and slime. You can equip rotating hamburgers or clear blue shields. They don’t help much against explosions though.

For the most part, the tracks are well designed with various routes and moving obstacles to avoid. For example, the Spooky Land track has ghosts flying around that will temporarily flatten and stun your racecar if you make contact with them. The base game has six race tracks and to make them somewhat different you race them both forwards and backwards. Sometimes it gets a little confusing and I found myself driving in the wrong direction on multiple occasions. The Y button will place you back in the proper direction, but by the time you utilize that feature you’re probably in last place already. Race with Ryan is powered by the Unreal Engine and the visuals look great. The tracks are all colorful and nicely detailed. Between the career races you’ll see video clips of Ryan and his parents.

The sound is another story. I’m not familiar with the YouTube show or characters, but I found most of the voice-overs to be annoying. The sound effects are repetitive too.

If you know someone who is a fan of Ryan’s World, they’ll probably enjoy this game. If not, there are better kart racing games out there. Race with Ryan is pretty tame with cartoon violence, so there’s little to worry about morally. Teens and adults will probably find this game to be too childish for them, but younger kids will find a lot to love here.