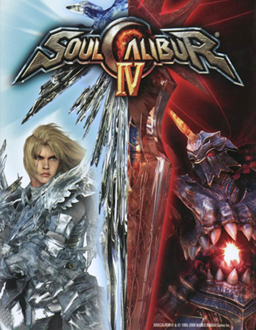 The sun is setting over the horizon. The wind is blowing. Leaves are falling from trees. Beautifully crafted architecture sitting above an equally beautiful landscape creates an impressively serene image worthy of a fine painting. But this beauty carries a blemish, a scar, a disruption in the serenity. Two hardened warriors, blades in hands, are locked in a battle to the death.

If you were to walk by a screen displaying Soulcalibur IV, this is quite literally something you would see. That said, this contrast of beauty and brutality goes much deeper than just the surface of what you see, striking to the very core of the game's design.

On the surface, SCIV is a very pretty weapons-based fighting game. Elegant and graceful motions are met with lightning-fast and devastating strikes. Beneath the surface, the beauty and brutality paradigm continues. Complex and flowing attack combinations can be implemented, but well-timed parries and blows can be equally potent.

Make no mistake, despite my lofty language, the game truly is a blend of glory and grit. If you\'re watching the game, you\'ll see the glory. But when you\'re playing, you will feel the grit.

And the grit will hit you hard. 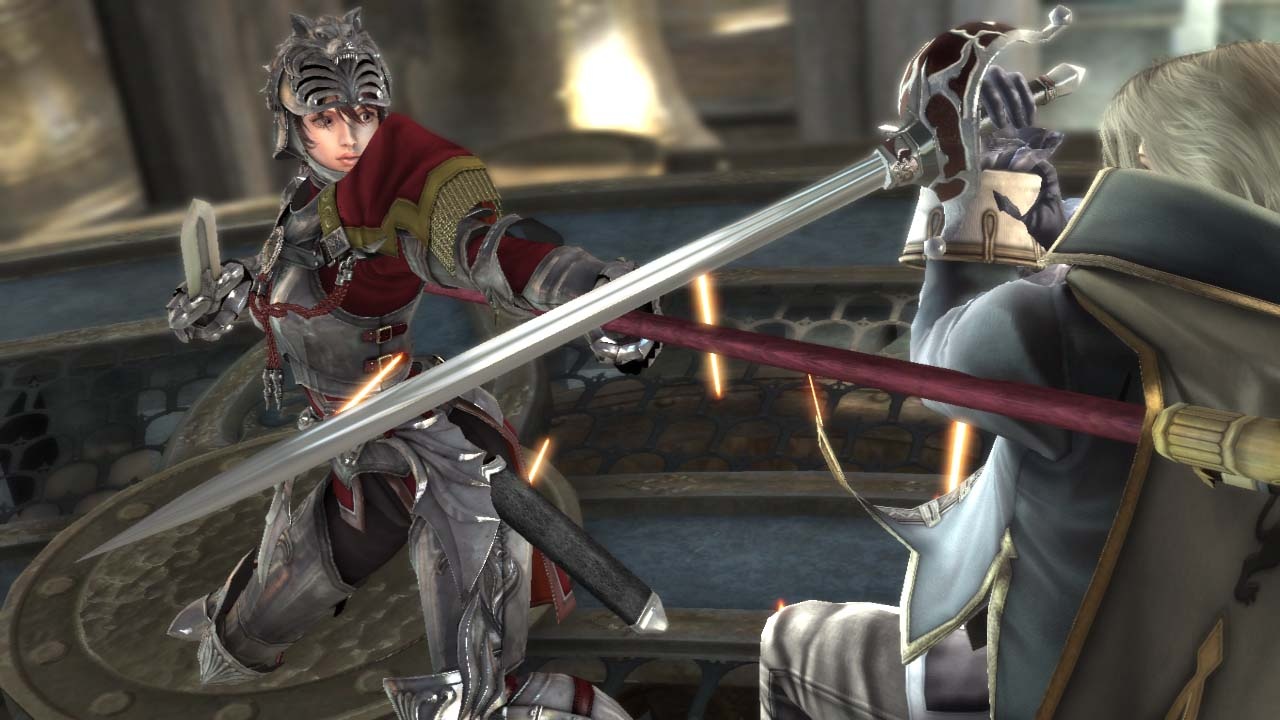 Moral Warnings: Some costumes hardly even count for clothing, just barely covering the most private of private regions; though gore is absent, the weapons-based violence can be downright brutal; occasional mild profanity; some characters have ties to dark powers of a fantasy nature

Those familiar with the franchise can know what to expect here since SCIV does little, if anything other than online play, that is new to the series. However, the game works so well that it\'s hard to fault it for staying true to its predecessors, choosing to simply refine what has worked in the past while bringing the game into the current console generation.

For those less familiar with the series, Soulcalibur IV revolves around a very simple concept: Defeat anyone who comes at you in a duel by any means necessary. Armed with swords, polearms, and other and less widely-recognized weapons, combatants fight until their life bars run out or they get knocked out of the battle arena.

Fights take place in fully 3D arenas, and environmental awareness is important. Beating opponents into a wall adds damage; knocking opponents out of the playing field results in an immediate win. With a wide variety of attacks at your disposal, the ways to dispatch opponents are beyond measure.

Seriously, every character has a move list upwards of 100 distinct attacks and combos. These attacks include a host of horizontal and vertical weapon strikes, kicks, parries, and throws. It sounds like a lot of character depth, and it\'s certainly there, but, at least in my experience, this depth isn\'t altogether meaningful. Quite simply, Soulcalibur is just that: simple. You can spend time learning the whole list of attacks, study combos, and practice them until your fingers bleed. But, for better or worse, that\'s not a guarantee that you\'ll win.

To SCIV\'s credit, however, the role of the Soul Gauge (which is reflected in a color-changing orb next to your life bar) does provide a layer of strategy. Guarding results in the orb gradually shifting from the default state of green to a warning state of red (though it will recover over time). Guard too much, and the gauge will flash red. Additional blocked strikes will result in a Guard Crush and an armor break (which visibly falls off the character).

Broken armor will cause further attacks to the now unprotected area (of which there are three: high, mid, and low) to do greater damage than usual. Being in Guard Crush state is very undesirable since you are completely vulnerable and opponents can perform special instant-kill Critical Finishers by hitting all four attack buttons at once. Thankfully, this state does not last long, and it is not a guarantee of losing. 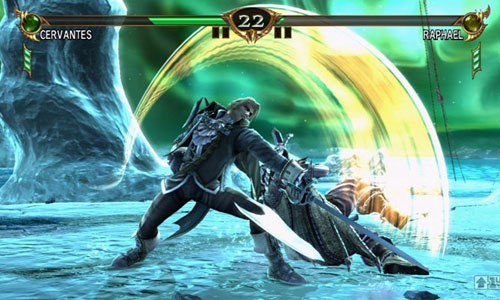 Still, at the end of the day, it seems that fundamentals will do more to assure you of success than character mastery or strategy. A perfectly-timed parry (by simply hitting block and forward or back at just the right moment) sets up a huge opening for damaging an opponent. Do this a few times, and you\'ve won your match.

Make no mistake, though; what I am saying is not meant to be contemptuous toward the game. It\'s true that I don\'t consider SCIV to be the deepest or most competitive fighting game around, but it is a great deal of fun. Due to a system that rewards timed precision and punishes excessive guarding, fights have a way for being very intense and thrilling, especially when playing against friends.

On that note, playing with friends is at its best when your friend is sitting in the same room as you, and the game carries a typical versus mode to give you that option. Additionally, the game offers genre-standard ranked and unranked online modes. They\'re not perfect, but they get the job done. Due to the game\'s age, finding matches is not the easiest thing in the world, but there are people who still play online.

Outside of the versus modes are a couple of single-player offerings to hold your attention. Unfortunately, the mode varieties are not particularly interesting. Moreover, the game\'s story is, well, pretty insignificant. True, fighting games don\'t usually pride themselves on having great stories, but it still comes out feeling like untapped potential.

Instead, fighting games tend to pride themselves on their cast, and Soulcalibur\'s is rather solid. From the painfully slow and even more painfully brutal Nightmare to the lithe and tricky yet weak Xianghua, the character variety is huge. Some, like the staff-wielding Kilik, can attack from a mile away. Others, such as the kunai-using ninja Taki, need to be extremely close to an opponent to be effective. Whatever your playing style preferences, the sizable cast of over 30 characters is sure to have something that suits you. As a bonus, a few of the extra characters were created by famous manga artists. You can even customize the appearances and armor of the game\'s cast if you\'d like.

But if the available characters just don\'t cut it, the game designers still have something in store for you. Soulcalibur IV includes an extensive character creation tool that will keep you occupied for a while. In the creation mode, you can design your character\'s appearance (with a whole lot of options for clothing and armor as well as body type and physical traits) and choose his or her fighting style and weapons. There are a ton of options here, and the possibilities are practically endless. However, you will have to unlock clothes and weapons for use in character creation with in-game credits earned by simply playing the game. 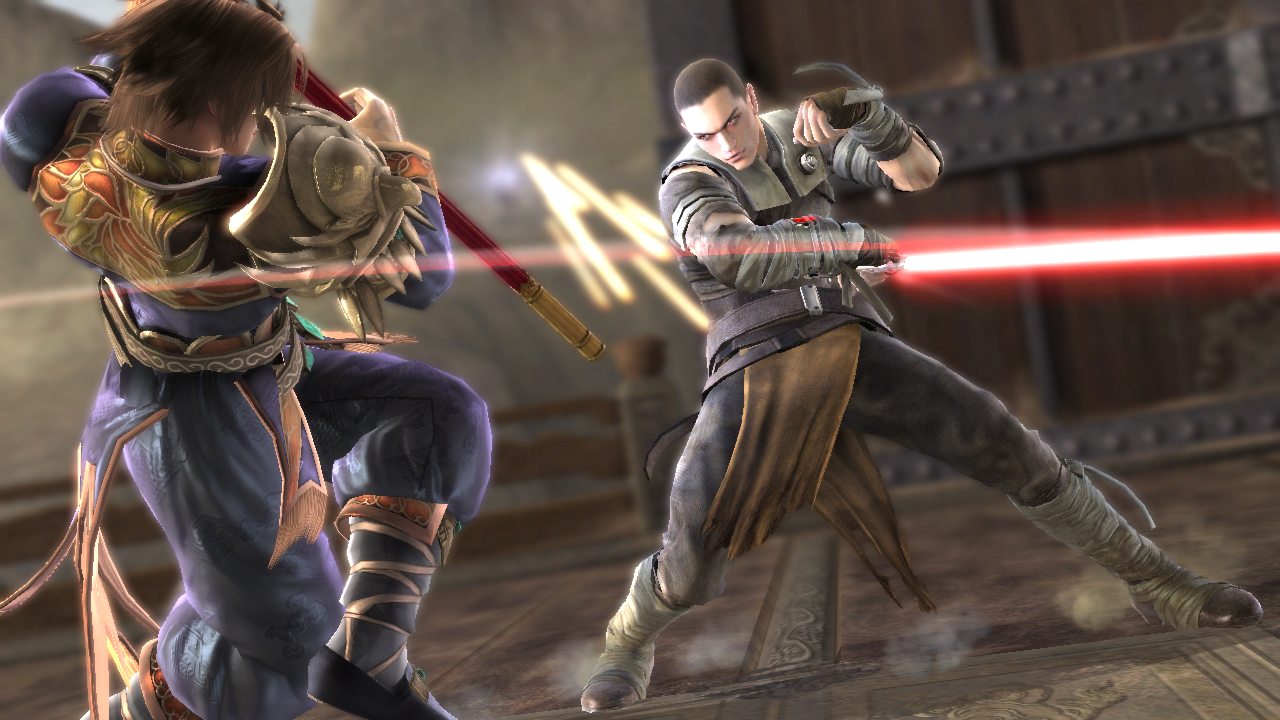 Oh. I almost forgot. Soulcalibur IV also includes a few Star Wars characters just because Namco-Bandai could throw them in. Xbox 360 owners get Yoda. Playstation 3 owners get Darth Vader. Both versions get Vader\'s Apprentice from Star Wars: The Force Unleashed. If you have five bucks to spare, you can buy whichever character your version of the game doesn't include. Admittedly, they feel a bit out of place in the game, but their awesomeness is still welcomed here.

What's that? You wonder about the production quality? Well, rest assured, dear readers, Namco-Bandai pulled out the stops here. Even though the game is not fresh off the press, it\'s still a very pretty game. Character models are highly detailed, and the animation flows nicely. Wind will blow hair and clothing around, for example. Stages are beautifully crafted and look very much alive. Inclusion of a Star Destroyer level is, for a Star Wars nerd like me, a definite treat. Lighting effects, be it the spark of colliding blades or lens flare from the sun, help to further bring the game to life.

Of additional help in bringing the game to life is the audio department. The sounds of clanging metal are definitely satisfying. Voice actors are not exactly revolutionary, but they do their jobs well. Points for the cliched, overly dramatic announcer who manages to add to the SCIV\'s charm. The music also contributes to the game\'s dramatic feel of battle.

Unfortunately, not all within Soulcalibur IV is perfect. The gameplay is rooted in armed combat. Broken bones and gore never get shown, but many attacks would be absolutely devastating and fatal, including stabs through vital organs and blades across the neck. There is some language, but it is mostly mild, including the expression "follow me to hell." The supernatural is present, with dark powers (though of a fantasy nature) driving many of the characters. One character is more or less the equivalent of the Angel of Death.

Perhaps the biggest issue for most readers here is in the costuming department. If you've seen Soulcalibur images, you've likely seen Ivy in her costume that only barely covers very select parts of her body, leaving the majority of her excessive figure rather visible. By far the most extreme costume, but there are others that are highly revealing, too. Moreover, with the armor break functionality, most characters can be occasionally reduced to their under garments if taking enough of the right damage over the course of the match. Additionally, though not implemented to an extreme level, bouncing breast physics make their way into the game.

Taking the caveats into consideration, Soulcalibur IV is not for everyone, nor is it something I immediately recommend to the masses. The game doesn't do much that\'s new, but it is so solid that it\'s hard to complain. The game design allows newcomers to hold their own yet still offers lengthy move lists to those who want to learn them. Still, the intense do-or-die design, regardless of skill level, is what will keep you coming back. After all, it\'s kept me with my gaming ADD coming back from time to time even after two years of playing.