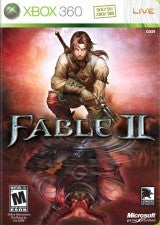 Choice is a feature that has always been a big seller in games. Almost every game offers more and more choices you can make, from what side you take to what clothes you wear. Fable 2 is all about choice, which makes it kind of hard to review from a moral standpoint. If you play with good intentions, the game could do pretty well. On the other hand, if you play with evil intentions you can be downright nasty. However, I’ll get back to that later.

Fable 2 is the successor to the 2004 game Fable, obviously. Now I say successor and not sequel, because as far as I can tell, there’s no direct connection between the two aside from a host of references, though I have not played the first. Both games are known, perhaps most prominently for the character’s ability to affect their appearance with their actions. If you act evil, you sprout horns. If you eat poorly, you get fat. Fable 2 throws in an additional morality measure: Purity. This is a measure of your self-indulgence. You lower your purity by eating fattening food, hiring prostitutes, getting drunk, or raising prices to get more money. You increase it by eating right, doing jobs, lowering prices, and taking care of your family. This provides the possibility for interesting characters such as the kind glutton and the responsible murderer (what I played). Purity mainly has an effect on how attractive other people find you. Pure characters are much more attractive, while corrupt characters are often fat with bad teeth and skin.

Of course, one of the most common ways people will likely go up and down the morality gauges is how they treat other people. There are a wide range of options available for how your Hero handles the ordinary people all around them. From expressions that allow you to pose, insult, show off, or order people around to being able to seduce, marry, or outright murder them. Of course, the people will react to you as well. If you are rich or attractive they will flock to you and follow you around. If you are aggressive and murderous, they will fear you and run when you approach. 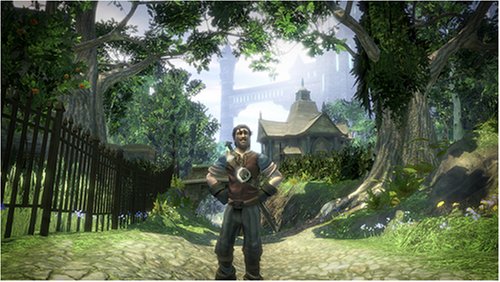 Strong Points: The game provides a lot of choices that actually affect the world around you. The graphical style subverts most limitations, and the audio is fitting.

Weak Points: Combat can be awkward and interacting with the world sometimes requires extra work. There are a number glitches that can occur, especially around the family.

Moral Warnings: While visually the game is very tame, it allows you to take part in a large number of evil and promiscuous acts, but none are required to beat it. The game is also very open about homosexuality.

The final thing you can influence is your surroundings. You will have a direct impact on the world from a young age. One of the first quests you do has you decide the fate of a town, either turning it into a crime ridden slum, or peaceful suburb. A few other places offer this direct control as you progress. More often however you’ll be influencing the economy with how you spend your gold. If you buy stalls or houses and rent them out you can raise or lower the prices, which in addition to giving you periodic payments, will affect both your Purity and the town’s economy. As the economy increases so will the quality of goods and the dividends paid back to you.

The story itself is pretty simple: you start out as an orphan on the streets of Bowerstone with your sister Rose. You go around collecting money for a magic music box which eventually leads you to the home of Lord Lucien, who proceeds to kill your sister and nearly kills you. Fast forward a decade and you’re all grown up while Lucien is trying to take over the world (of course). So it’s time to get some weapons, learn some magic, and set out with your dog to get revenge and save the world.

So now you know what Fable 2 is and what it’s about. Now let’s talk about what works and what doesn’t. To start out the controls are a bit awkward. Just running around takes some getting used to as sharp turns are entirely foreign to your Hero. Expressions and a few commands can be used from the D-pad, but don’t come with labels, so it can sometimes be a gamble, especially on small or low definition screens. Instead it’s generally safer to go the long route and open up the expression menu, and manually select each one. Using random objects can also be problematic as you often must approach them from the exact right angle or the game won’t register it. 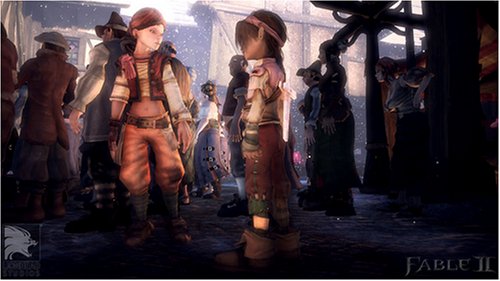 However, this is an action adventure game. What makes or breaks it is likely to be the combat. So how does that work out? Short answer is: okay. The game maps each of the various attack types (melee, ranged, and magic) each to a single button. So anything with your melee weapon is on X, anything with your gun/crossbow is Y, and B is your spells. Of course, this can cause some difficulty as hacking, blocking and charge attacks are all X. Dodging is even more difficult as it requires two conditions to be met: have your weapon out and be locked on. Unfortunately, those can be hard to control. Your weapon gets put away any time you press the dodge button (A) when not locked on or when you use any tier of magic beyond the first. Locking on is more arbitrary. You have no direct control, and you’ll unlock whenever you kill your current foe, move too far away, or sometimes seemingly at random.

Locking on also becomes a problem when dealing ranged combat. Regular or “no scope” shots don’t cause too much trouble. However as I’ll mention with first tier magic- that doesn’t do much. It’s much more effective to level up your Dexterous Style (ranged skills) and get the zoom in option. The game goes into a third person shooter mode and gives you a nice damage boost. However, a combination of low sensitivity and awkward auto-aim make this is difficult to use, so it’s best to let the game pick a target, zoom in, shoot, and then try to get out and let the game pick a new target. When you can get it to work, this is highly effective, when something gets stuck however, it’s a pain.

Of course, if you find that was annoying, you’ll have a field day with magic, or Will as it’s called in Fable 2. Each spell has five tiers, each requiring you to charge up longer to get the effect. This, of course, leaves you vulnerable to attack. Generally higher level spells are the only ones worth it, if they\'re worth it at all. Why waste time charging a second tier spell that won’t kill an enemy, if I can kill an enemy with one rifle shot in the same time? There is some kind of increase in lower tier spells as you spend more experience on Will powers, but the game refuses to show you any kind of information on this. In fact, aside from gold and renown, the numeric values provided by the game are useless as there is no way to put them into context.  Finally, switching around spells mid combat is extremely awkward, requiring you to hold the right trigger and use the D-pad to select your tier, and then the spell to be used when you charge to that point.

Now, while that can all get very annoying trying to deal with all of it at once, careful management and a little practice (and liberal use of the Time or Raise Dead spells) can make almost any battle winnable and not an overly frustrating experience. The same cannot be said for the AI. Unless you are going for an evil corrupt Hero, you will likely end up with most people liking you and following you around. This means an endless stream of comments and marriage proposals, even if you are already married. They also will ask you to leave their houses, but wander into yours without so much as asking and then proceed to ask you to marry them in front of your spouse. As I was playing evil, those who did this tended to disappear. 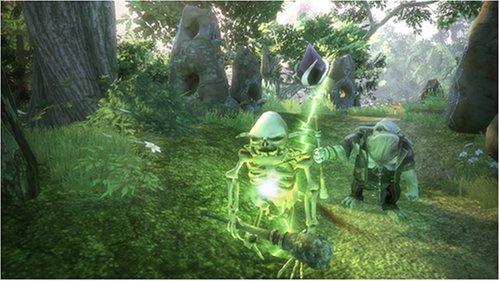 Marriage comes with its own slew of problems. It tends to be very glitchy, especially in the cases of quest related marriages. These can include the spouse’s happiness rapidly decreasing, children standing around in town and not responding, and families or children disappearing for no reason. Spouses also require sex to stay happy, or at least seem to (I’ve not tried a celibate marriage). This is handled by the screen going dark after selection of protected or unprotected sex and your spouse spouting a few vague comments. Usually you can still hear people making random comments in the background of this, which is rather odd. The game allows for you to take one or more person to bed outside of marriage, and same sex marriages and intercourse. There are even achievements for taking multiple people to bed, and marrying two people at once.

As stated before, moral choices are a core part of the Fable games. This means that while you can do many evil things, very little is required of a good character. While there are evil jobs and quests, they are not mandatory and have good counterparts. The worst you are forced to do is interact with some demons on behalf of another character.

While choice is one major selling point, an almost equally big seller is how violent and graphic the game is. For the most part however, Fable 2 manages avoid going down that road. Sex is blacked out as mentioned before, characters don’t wear overly revealing clothing with only a few minor exceptions, and there is very little blood in combat. Instead when you attack someone experience orbs fly out of them. Some locations will however be littered with skeletal remains or bloodied corpses and it is possible to shoot off people’s heads with a Skill character which is accompanied by a squirt of blood.

The final verdict? It’s not a bad game. The combat could use some work, but it’s still fun. The AI for common people can get annoying, but rarely gets in the way. Visually and audibly the game has very few flaws beyond some clipping and redundant voice acting. However the game is a little glitchy in places and runs slowly later on. As far as content goes, it’s middle of the road. It’s not for children as the M rating will assure you, but if you’re old enough to make choices responsibly, you could probably play it around kids.