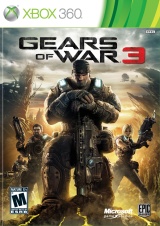 Loud, brash, pretty, and crass that perfectly sums up the Gears of War 3 experience. The scene is set as humanity's last glimmer of hope of surviving an all out Lambent takeover lies within the trigger fingers of a ragtag disbanded group of Gears (Soldiers) of the COG (Coalition of Ordered Governments). The game opens up with Marcus Fenix being broken out of prison and led into battle. It's a short peek into the inner demons Marcus has been dealing with since the Lambent Invasion.  As intense as the action is, you can't help but be just as intrigued by the dramatic conclusion looming on the horizon.

This has to be the most well put together game story-wise this year. The action is relentless, with heart-tugging moments that make the 10-12 hour campaign seem to end too quickly.  And that campaign is good; it's hard to put the controller down when the story begins to unfold, and I haven't felt like that since Mass Effect 2. The new characters are fleshed out well and are all distinguishable, ranging from the sensitivity of Anya to the sarcastic attitude of Jace. You can easily find a favorite character outside of the main culprits. That said, I did come away wishing that the characters had different executions to better show their personality on the battlefield.

The gameplay stays pretty much the same as in previous, although there are a couple of new wrinkles that should be mentioned. The first and most important new feature is something called "tag"; this lets you mark an enemy, and directs your squadmates to fire on that target. This has very real strategic advantages, and has a significant impact on gameplay. It's executed very well, but I couldn't help but think that it would have been better to be able to target multiple enemies, with each target being a different color based on priority. The enemies attack from all angles and can quickly surround your squad as you fight to the next checkpoint. This feature also carries over into the Horde, Beast, and Versus modes, which comes in handy against human opponents.

Another interesting twist is the speed at which players move now. The speed of sprinting has been reverted back to the original Gears of War rate. Characters fly past a hail of bullets and turn corners more smoothly while sprinting, unlike GOW 2 where sprinting felt weighed down. The downside though is the lag when playing online. With the outlandish speed and the crazy dodge rolls, close quarters combat is almost nullified by the fast-paced movement. 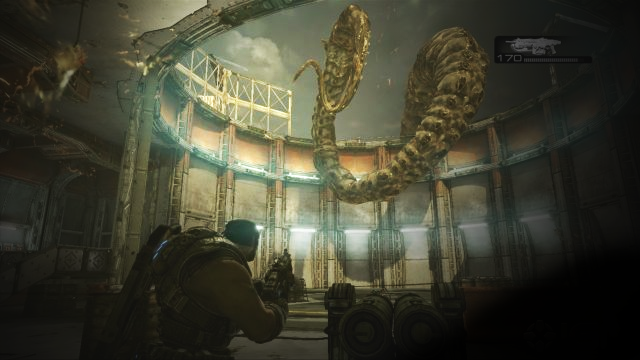 The game simply sounds amazing outside of the foul language, but that's expected in the GOW series. Thankfully in the options menu you can censor the mature language (and gore).

Running off of a modified Unreal Engine 3, GOW3 is the prettiest of the series.  The game runs smoothly, and the only issue I had was with the environmental design, which was very drab. It's easy to lose sight of just how beautifully detailed the game is after making your way through several war-torn areas.

With a stunning campaign that's definitely worthy of a few playthroughs for the action alone, GOW 3 is an interesting game. There's nothing really new about it, but it's fun. The campaign doesn't last long enough to really get the most out of the game, but you'll definitely find plenty of other options that will keep it spinning in your 360 for a while. There's a new Team Deathmatch mode where your team runs out of respawns and the last one standing wins. 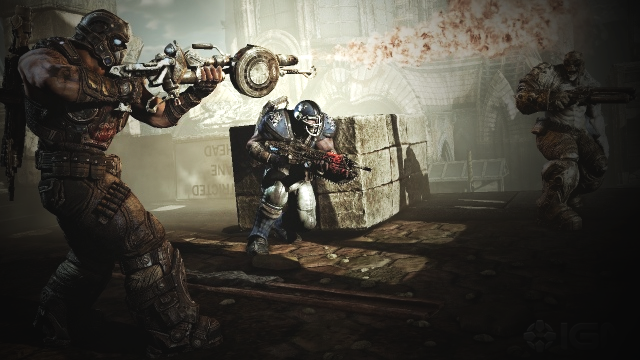 Horde mode allows you to play as the various COG members and you have to survive waves of Lambent. With the new ability to buy fortifications and to share ammo and cash with your squadmates, Horde is easily the most fun I've had with GOW 3 so far. Epic introduced Beast mode as well this year, where you play as a Lambent and attack waves of COG within a certain time limit. It just seems like a cheap add-on to me though.

The only knock on Versus mode is that it takes too long to get into a match. This is probably expected because it's a new release, but I was expecting more, especially since Epic has given us dedicated servers for ranked matches.  More people seem to be playing quick unranked matches though which could become problematic in the future.

In the end, every mature gamer can find something in Gears of War 3 to attach to. Whether it be the dramatic campaign, or wanting to connect with your friends for a few hours of a revamped Team Deathmatch battle. Even girl gamers can finally have a place in this testosterone battlefield by picking between a couple female characters. They say it's hard to please everybody, but this game may have just disproved that theory.  Bear in mind that this is a Mature game and has a lot of swearing and violence in it.