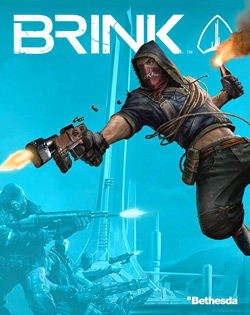 It started as an experiment: a self-sufficient floating city (the Ark), able to sustain life for years to come. But then the waters rose. What was once an experiment is now humanity’s only means of survival, for not only its founders, but for the thousands of refugees as well. Many decades have passed and now two factions have risen: the Security forces, who will defend the Ark till their last breath, and the Resistance, who will do whatever it takes to leave. Now the question is, which side will you take?

Developed by Splash Damage (the developer of Quake Wars), Brink is a first-person shooter with a twist. Players will still shoot, melee and vie for control of the battlefield, but Brink allows you to do this with a bit more style. You see, gameplay in Brink revolves around movement; SMART movement to be precise. Probably one of the best features, SMART (Smooth Movement Across Random Terrain, demonstrated in the picture below) is essentially sprinting mixed with parkour style movements. While sprinting, your character will automatically vault, slide and mantle over obstacles, all while maintaining complete control. And you’ll need complete control if you want to last a minute in Brink, because to stop moving is to stop living. Everything is fast-paced and you never know when an enemy will bolt past a corner, shotgun in hand, with his sights set on you. 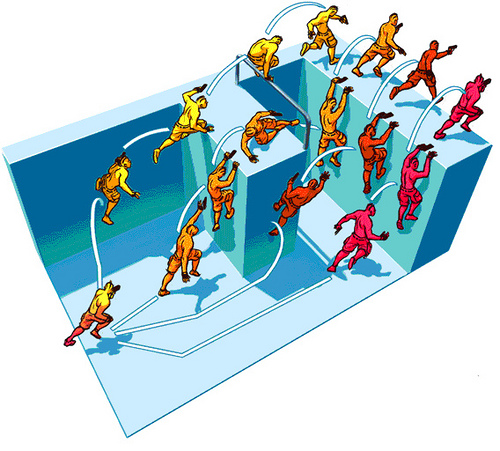 To my dismay, Splash Damage still hasn’t added any new modes since their last game, Quake Wars. Objective and Stopwatch are the only modes available, and Stopwatch is just a remix of the Objective mode. Objective mode has one team attacking and one team defending. After the attacking team completes all of the objectives (such as escorting an ally or hacking a computer), or fails to do so in the allotted amount of time, the round ends. Stopwatch mode begins the same way, but when a round is completed, the teams switch sides and try to beat the others’ time.

The lack of modes seems so out of place in this day and age. I’m not normally a supporter of deathmatch, but it seems like a no-brainer here. It could be said that it’s because the developers wanted a focus on teamwork, but that isn’t a valid excuse, they still could have added a capture the flag mode. Since there are only eight maps (and two more available via DLC), and the objectives never change, it felt like I was doing the same thing over and over. Attacking or defending alone might be fun for awhile, but they’re a lot more fun together.

Thankfully the other mechanics keep it from feeling too repetitive. Gunplay is tight and with a wide variety of weapons and attachments, everybody will find a weapon setup they like. The class system is back but has been simplified to just four classes (Soldier, Engineer, Medic, and Operative). Each class is well balanced; no one class has too much of an advantage over the others, and you’ll need to work with others if you wish to keep everyone alive. Medics can’t just wander around only healing themselves, they need to do their part and revive teammates. And the same goes for the others; a winning team in Brink isn’t made of lone wolves. 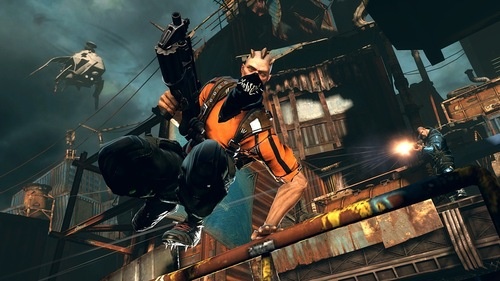 Different body types (light, medium, and heavy) introduce another element of strategy, because you can only choose your body type pre-game. The Light body type may be quicker, but they don’t do well as defenders, and the heavy doesn’t make a good operative. Add in SMART movement and you have some interesting dynamics to offset the lack of maps and gameplay modes.

With Crysis 2 coming out only two months before Brink, I’m sure shooter fans were expecting to be let down by the graphics of anything else, but not like this. I’ve played a lot of games, but rarely have I seen so much texture pop-in. There were occasions where I would spin around in place and textures would have to re-load. The sad part is that everything actually looks decent when it’s loaded. Maps fit the theme of the game, characters are distinct and customizable, weapons have cool designs, and the HUD was beautifully simplistic. But that’s not where your attention will be drawn to.

Unfortunately, it seems the same can be said of the audio, as it’s horribly average. It’s not bad, and it’s not good, it’s just...boring. There are a decent number of voice actors, and they’re all tolerable. Music is rarely used, not that it’s a bad thing, since it wasn’t very good. Gun and grenade sounds were acceptable, but not excellent. I can’t rail on anything, because nothing was bad. It’s just bland.

But it’s not all bad, as there are some improvements over Quake Wars. One of my complaints about Splash Damage’s last game was an underused story. I’m happy to say that isn’t a problem here. Nearly everything in Brink revolves around the story: cutscenes play before every match, numerous audio logs can be unlocked, and there’s finally a decent campaign. To be fair, the campaign does use the same maps as the multiplayer. But since a story isn’t really necessary here, I’m glad to see that the world was given some context. 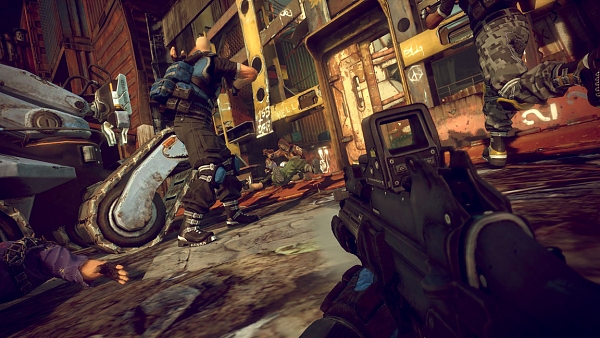 Having played Mirror’s Edge (a parkour game I highly recommend you play), I understand how complex and intricate controlling parkour can be. I was interested how all the different movements could be simplified and combined with controls for shooting and still be functional. Enter the SMART button, holding LB (I’m playing this on Xbox 360) will make your character both start sprinting and automatically vault and climb over obstacles. Additional movements can be used with the crouch and jump buttons. Shooting controls are tight and I was pleased to see a way to lean out behind cover (though it was hidden pretty well). Everything was just similar enough to Call of Duty to be familiar, and just different enough to work well.

What can I say about questionable content in a shooter that someone else hasn’t already said? Guns, knives and grenades are the main source of violence, and when hit by said weapons, characters spurt blood. Blood doesn’t land on anything, and the amount of blood isn’t excessive. Cursing is common enough, but no f-bombs are dropped. It should also be noted that the Resistance is a revolutionary/terrorist group.

Brink isn’t a great game. Honestly, I’m not even sure if it’s a good game. It’s marred by more technical problems than I care to count, and there isn’t a whole lot of content. However, it is fun. I don’t believe this game is worth the original asking price of $60, but since it’s currently retailing at around $15, it may be worth a try. You might find that you like it, despite its flaws.