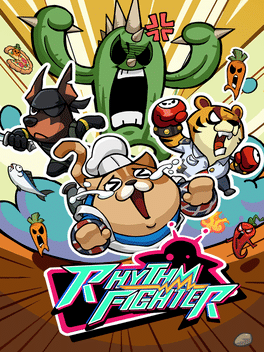 Thank you Coconut Island Games for sending us a review code!

In the universe there’s a peaceful blue planet called Beatara that’s inhabited by animals. Commander Chaos from another dimension has decided to attack this planet by turning its vegetables into puppets of darkness. Just when all hope is lost, Mr. Disco revives your character and teaches him how to use Beat Energy to overcome the powers of darkness.

Rhythm Fighter is a roguelike fighting game that requires you to move and fight to the beat of the music. Depending on your timing, your movements will be rated as perfect, okay, or early. If you stick with the tempo, you’ll go into a fever mode to do more even more damage.
There are various fighters that you can unlock and play as and they each have unique moves and abilities. As you accumulate beat Energy, you can level them up and make them stronger. Beat Energy remains with you, but any gold and loot earned on your journey will be lost after you die and are brought back to life on Mr. Disco’s UFO.

Like many roguelikes before it, Rhythm Fighter’s level layout, bosses, and enemies are randomized each time you embark on a new adventure. However, there are daily challenges that are not randomized, and you can see how your score compares with others who have fought the same enemies with identical starting equipment.

There are many weapons that you’ll come across and I preferred the long range and projectile launching ones over melee attacks. On the UFO there’s a vending machine that you can spend Beat Energy on to give your character a leg up on starting weapons and HP bonuses. Each play through consists of six stages, but replenishing your health throughout your journey is not easy. The more HP you have, the better your chances of survival will be. After a few failures and earning achievements/trophy points, you can unlock the ability to revive once at the cost of Beat Energy. Additional characters and content are unlocked through achievements as well.

As you play through the stages you’ll encounter many hostile vegetables and environmental hazards like spiked floors, tesla coils, and flaming tiles. The enemies will have a wide variety of attacks including close range and long distance maneuvers. Defensive skills are just as important as offensive ones in this title. When a section is cleared of enemies, a safe will often fall from the sky and you’ll get gold with the occasional weapon or snack to recover HP. Many stages have a store that sells items for coins or by sacrificing your precious health points. Coins can also be tossed into a fountain for a chance of a power-up. Mini-bosses can be avoided, but stage bosses cannot be. Upon defeating a boss, you’ll get a power-up card, coins, Beat Energy, and some food to replenish a portion of your health. You can then take the UFO to the next area.

Maneuvering around the levels is pretty straightforward and you have to press the right trigger button to make your character move. The left and right D-pad arrow buttons will determine the direction your character will move and attack. Some attacks are multi-directional, but most are not. Quick travel is possible by pressing on the plus button to bring up a map. 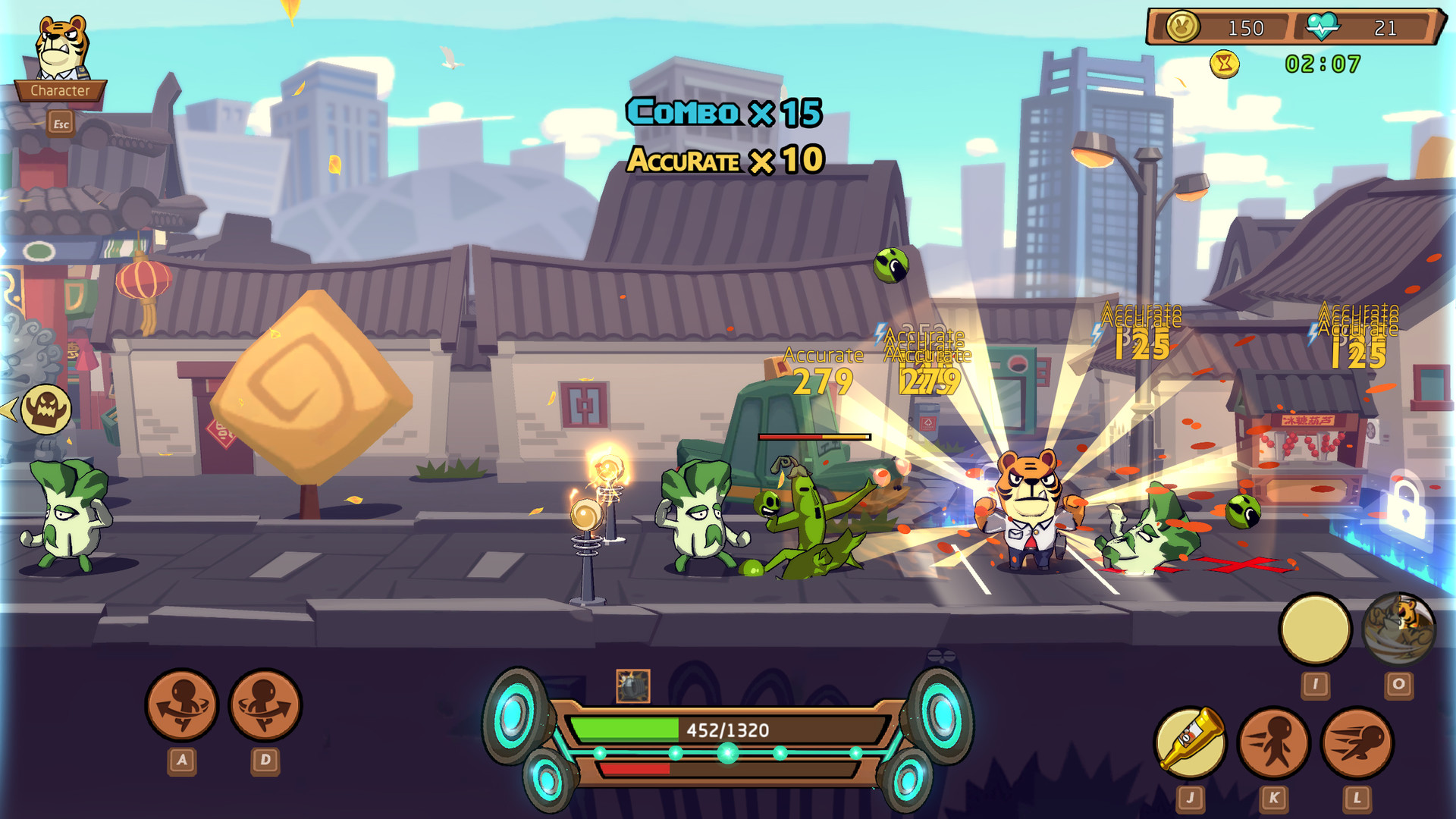 One of my biggest complaints about this game is the text. The first time I streamed and played this game, my Switch was docked and I was using my laptop screen. When playing undocked the text is so thin and small that it’s barely readable.

Other than the hard to read text, the rest of the visuals look great. I love the art style and character animations. The levels and enemies have a good amount of variety too.

The background music is great and easy to smack veggie around too. As far as I know, the soundtrack is not available to purchase. Bummer.

Rhythm Fighter is rated E10 and does have some issues worth noting. Although you’re fighting mostly vegetables, they manage to bleed and spray out blood with every attack. Towards the end of the game Mr. Disco will say hell and d*mn. There are multiple endings and if you get the true ending there will be a celebration with beer and alcoholic beverages. Some of the levels have an eerie haunted vibe to them and there are some ghost flying around them.

If you enjoy rhythm and beat 'em up games, Rhythm Fighter is worth looking into. Especially If you enjoyed Crypt of the Necrodancer (https://www.christcenteredgamer.com/reviews/pc-mac/5905-crypt-of-the-necrodancer-pc). If you wear or are on the verge of needing glasses, you’ll want to play this game on PC or docked on the Switch.