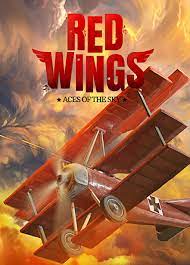 Red Wings: Aces of the Sky
Developed by: All In! Games
Published by: All In! Games
Available on: PS4, Switch, Windows, Xbox One
Release date: May 21, 2020
Genre: Action
Number of players: Up to two
ESRB Rating: E10+ for Alcohol references; fantasy violence; mild language
Price: $19.99

Thank you All In! Games for sending us a review code!

Red Wings: Aces of the Sky is a World War I based flying aerial combat action game. Upon launching the game, you can play the Story mode by yourself or with a friend, Battle modes, or the Tutorial. The Battle modes include single or multiple Survival or Versus mode where you can do dog fights against a friend. The Survival mode has you fight as many waves of enemies as you can before dying. Upon your demise, you can compare your score against others on the online leaderboards.

In the Story mode, you can play as the Triple Alliance or as the Triple Entente. Each campaign has its own set of planes and a comic book style story to tell. At first, you’ll only have one plane but as you complete missions you’ll unlock more. Each plane has its own set of stats including Max Speed, Endurance (Armor), and Heat Resistance (Firing rate).

There’s a Skill Tree that’s shared between both campaigns so that’s nice. As you complete missions, you’ll earn skill points which can be used to reduce the cooldown times for various skills. In battle you can do barrel rolls, quick comeback (turn around and face enemies shooting behind you), fatal take down, or call a squadron to assist you in battle. Having these available more often is quite handy!

In total, there are fifty campaign missions that are broken down into three different types. There’s not a lot of variety, but there is some. You have your standard dogfighting missions where you have to take down a certain number of enemies to win. In these missions, you’ll want to take out the enemy zeppelins that call in reinforcements as soon as possible. Bombing missions require you to accurately drop bombs on certain targets while dodging oncoming bullets. The last mission type is a fueling mission where you have to fly through fueling hoops and not missing any as you’ll run out of gas by doing so. On the left-hand side of your screen you’ll have a gauge that indicates your damage and fuel levels. If either gets depleted, you’ll fail the mission. Depending on how quickly you can complete the mission objectives, you’ll be awarded between one and three stars. There’s a significant difficulty jump around eight levels into the campaign and you may want to replay previous missions to build up your skill tree more if you find yourself stuck in a rut. With an aerial combat game, violence is a given. Most of it isn’t detailed, but when you execute a fatal take down you’ll see your pilot taking out an enemy with a hand revolver. Other issues worth noting include alcohol references and some mild language (hell).

The visuals aren’t extraordinary, but they get the job done. You’ll have to zoom in on the enemies to figure out which ones are zeppelins and which ones are war planes. There’s some variety in backdrops, but not much.

On the sound front there is some voice acting which is decent. The game menu has World War I era music playing which is fitting. The sound effects during the missions are well done. I like the “ping” noise made when you shoot down an enemy aircraft.

In all honesty, I found the single-player campaign repetitive, difficult, and boring. However, the multiplayer modes are much more fun. I have enjoyed doing dog fights with my kids while waiting at the dentist with them. If you enjoy aerial combat games and have someone nearby to play with, Red Wings: Aces of the Sky is worth checking out.