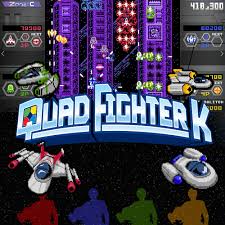 Thanks to Aksys Games for sending us this game!

Quad Fighter K is a mix of classic and creativity. It takes a tired format and reshapes it to its own accord. Built off a sort of Space Invaders style, Quad Fighter K has a simple premise: get from point A to point B. It operates on a sort of up-scroller, with you and the level constantly traveling up. You're free to move vertically and horizontally on this traveling up world, as you dodge enemies and bullets. But QFK is different in the way it handles ships.

In this game is something called a KYOGEKI system. The KYOGEKI system allows you to connect all four ships together. Each ship has its own special ability. Some fire lasers, some fire sphere like bombs that explode after traveling a short distance, some fire bullets, but each ship has its own different gun pattern. When you combine these ships together, the results can be pretty amazing. I once found a combination that fires 2 lasers from the front, and could also lay down heavy bullet fire from the right and left sides of it to keep my blind-spots clear. But there are so many other combinations there that you can try.

There are two different modes, with two sub-modes. The two modes are KYOGEKI and Attack respectively. KYOGEKI mode follows 3 ships and a "VIP" ship. Your job is to clear all the stages while protecting the VIP ship. Every stage your VIP ship has 9 lives, while your 3 normal ships have infinite lives. If you manage to clear a stage without losing your VIP ship, on the next stage it will have its full 9 lives again.

Attack mode allows you to play all levels without having to protect a VIP ship. However, all ships only have 5 lives. Now, let's talk about the sub-modes. Arcade lets you play a sort of story mode. You progress through each stage, getting harder as you go along. There's also Battle mode, where you choose which stage you want to play and go for the highest score. Both of these exist under the KYOGEKI or Attack mode, so in essence you can choose if you want to play them with the VIP ship or without. Personally, I found Attack mode more fun, but this is just my opinion. 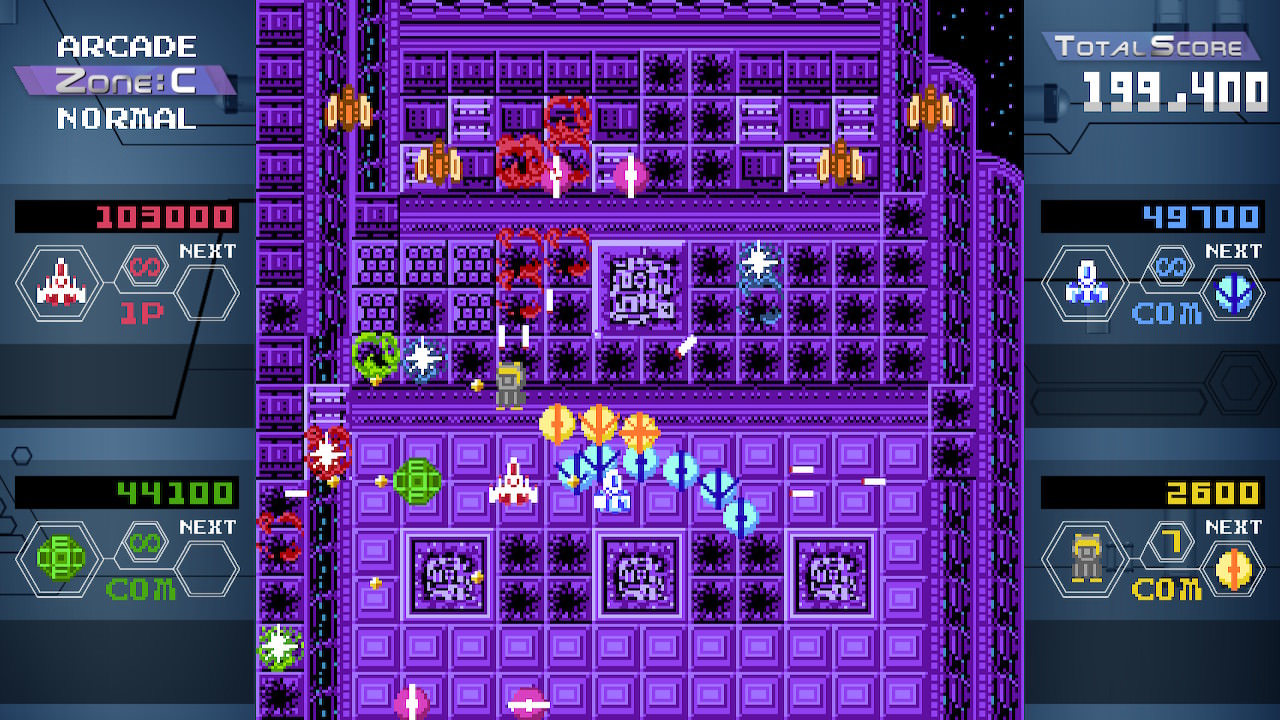 Strong Points: Fast and fluid gameplay; interesting system of weapons that allow many combinations
Weak Points: Can get a bit tedious; too many distracting effects
Moral Warnings: Some light cartoon violence

As you progress through the stages, you'll fight different enemies before reaching bosses. Each stage has 2 bosses, one mini-boss and a stronger boss. Each boss has different abilities and patterns. Enemies and bosses also can drop bombs that can be used to, well, blow things up. These bombs have different patterns for each one, although there are only 4 patterns that I've seen.

The graphics in this game are a very simple and colorful callback to the NES era. With an 8-bit presence that feels nostalgic, QFK has a great assortment of sprites and effects. The animation feels incredibly fluid and well polished.

The audio in this game reminds me a lot of the NES era as well. The music is a very upbeat 8-bit style, reminding you how limited technology was back then. The melodies are nice but a bit forgetful.

Controls also feel very fluid, with no appreciable delay. It has simple back and forth, left and right movement, with other buttons for disengaging the KYOGEKI system (which breaks the ship into singular entities again), one to use bombs and one to shoot. Now, let's move into the cons.

The only real issue I have with this game is some visual choices. In this game, some of the world itself can be blown up. These are just small tiles, but they can be blown up nonetheless. My issue is that every single time a tile or enemy is blown up, a distracting explosion effect is shown. The problem becomes evident when EVERYTHING starts to have an explosion. Below is a screenshot of said issue. 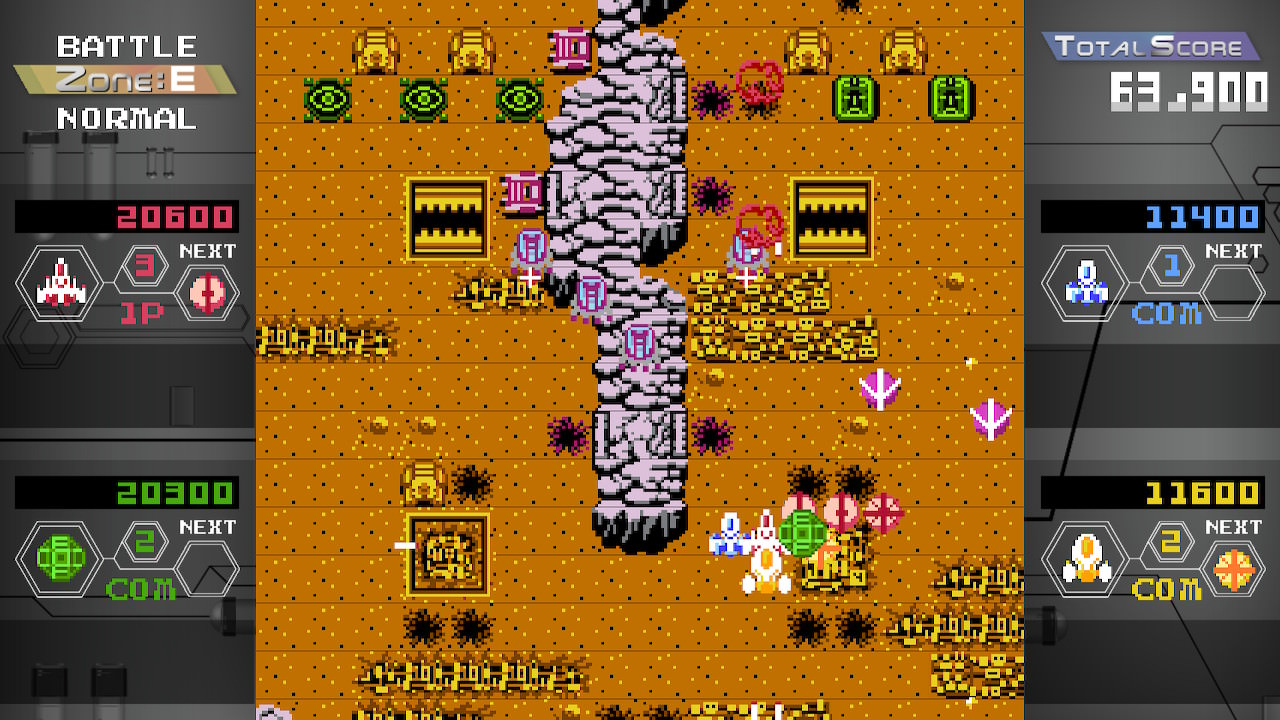 However, there is no morally improper content in this game. The violence isn't gory, there's no sexual content or language; it's a pretty clean game. One minor bug I found was this one below, where it seems the tiles weren't linking up properly and creating that black line effect you see. I only saw it once, so either I couldn't recreate this bug or I didn't notice it again.

But, I got a bonus game with QFK. It's called Cyber Ship Nakku (which I shall call CSN), and it is simply QFK but worse in every single way. It's easy enough to get into, as you can simply find it on the main title screen. But QFK looks like a NES game, the graphics are much sharper and more colorful. CSN however, just looks like a port of a NES game. The controls are also horrid; so bad that it feels like you're piloting a ship that's skidding on ice. The hit detection is awful, with most shots not even registering on enemies. And yet again while QFK sounded like an NES game, it still had improvements. CSN still sounds like a direct port of an NES game. There's only one or two ships in this game, the second ship being controlled by a second player.

I could go on about why this game is bad, but I don't even have the interest in doing so. I don't know why they felt putting the bonus game in was a good idea, because it entirely ruins everything that made QFK good. Thankfully, it's just a bonus game. You still have normal QFK.

In closing, QFK is a game designed on a format from the past, with a sprinkle of originality, but feels a bit generic and overdone.