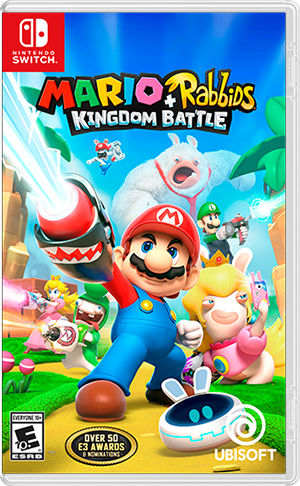 It’s always neat when franchises work so well together unexpectedly. Kingdom Hearts (Disney + Final Fantasy) immediately comes to mind, and now there’s Mario + Rabbids. It should come as no surprise that the Rabbids are behind Mushroom Kingdom’s new look and inhabitants thanks to a device that combines any two objects or characters.

The Rabbids unintentionally invade Mushroom Kingdom through a wormhole that appears over it. Mario finds himself surrounded by a Rabbid Peach and a Rabbid Luigi. Thankfully, these new partners are calmer than typical Rabbids. A Roomba looking gadget named Beep-O assists Mario in getting acclimated in this modified kingdom. Beep-O suggests locating the Rabbid dubbed Spawny who is the one wreaking havoc in Mushroom Kingdom.

In total, there are four worlds to explore and they each have numerous treasures, coins, secrets, and battles to uncover. There are many collectibles like artwork, soundtracks, 3D models, and Tarot cards which can be viewed in the museum. In the Battle Headquarters you can modify and upgrade your party and weapons. Each character has a unique skill tree that can have the various tiers unlocked with Power Orbs, which can be found in levels or earned by completing Rabbid Challenges. The Buddy Dome is where co-op multiplayer battles take place. Multiplayer isn’t available until the first mini-boss is defeated. By then, the players should be acclimated with the ins and outs of this turn based battle system. 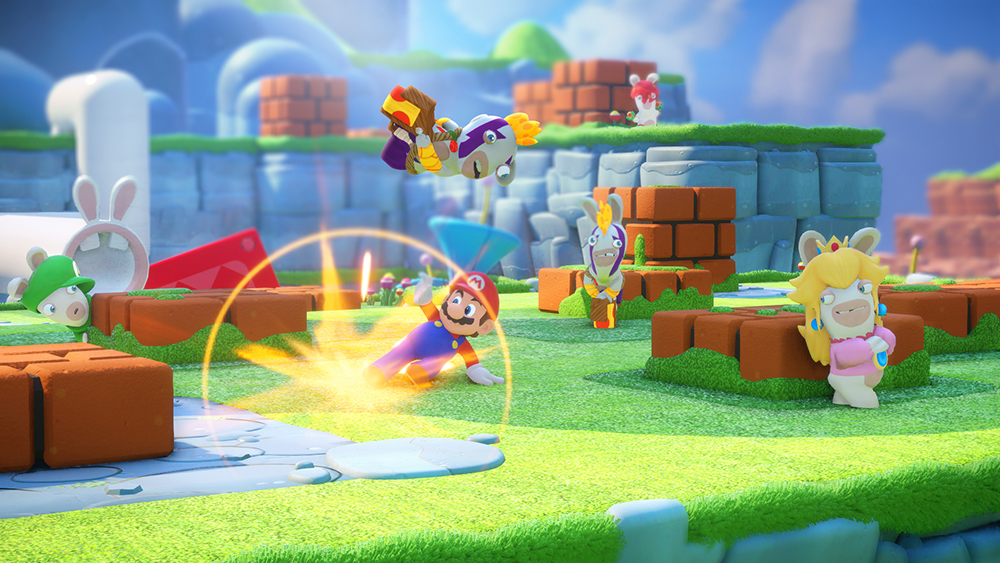 Your battle party consists of three characters who each get to move across grid style levels and attack during the player’s turn. Some of the player characters as well as enemies have a preemptive or counter attack ability so keep that in mind when playing your characters. If your character is close enough, they can slide into an enemy before using their attack for additional damage. Most battlegrounds have areas to take cover, but many of them are destructible and temporary. If possible, try to stay on high ground for a significant damage boost.

Before the battle begins, you can choose to play at an easier difficulty which will replenish your party’s HP (health points) and give them an additional 50% of health. Some battles will replenish your health afterward, but most of them don’t. You may find some mushrooms around the world that can heal you, but they are few and far between.

Most of the battles are won by defeating all of the opponents. Some battles only require eliminating a certain number of foes which will keep respawning until that goal is met. Another battle objective is just having at least one of your party members make it to a designated area. If all of your party members survive, you’ll get a perfect rating. If one party member gets knocked out you will earn a good rating and having one standing will net you a fair rating. You can always replay battles to get a better score if desired. The better the rating, the more coins you will earn. Coins are used for unlocking better weapons. The physical version of the game I was sent contained a DLC code for upgraded weapons, which were significantly more powerful than the starter ones. Besides this DLC there may be a new story and worlds added so a season pass may be worth considering if you enjoy this game. 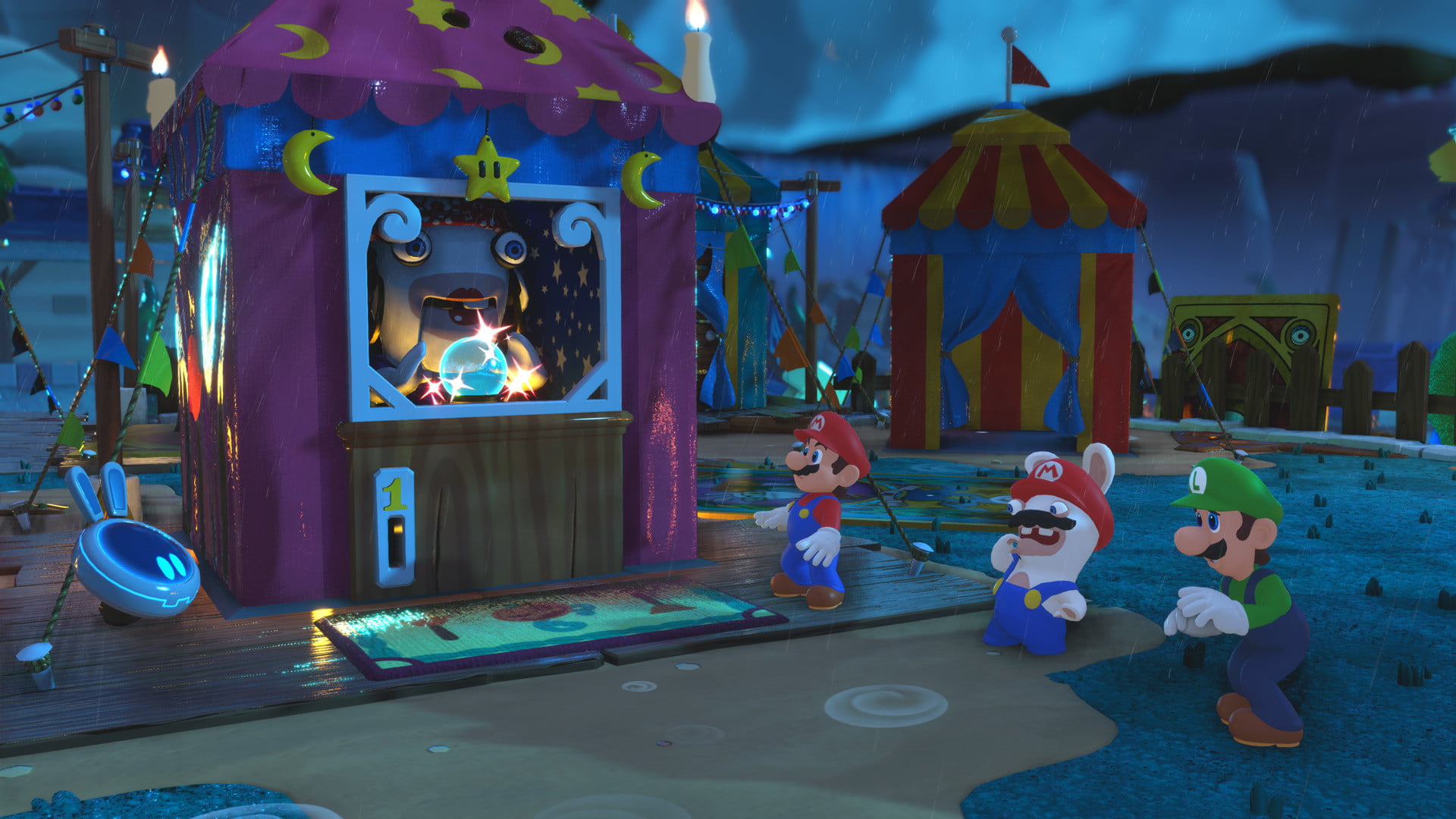 The current worlds will keep you entertained with several levels, a mini boss, and an intimidating boss at the end. Once the boss is defeated, the next world will become available by unlocking a new ability for Beep-O. You can use the new skills to unlock areas and get to treasure chests previously inaccessible in the earlier levels.

The worlds and enemies have a lot of variety and detail. A lot of effort and thought went into the design of this game and the visual and audio quality shows. The same voice actors reprise their roles and I love hearing Luigi's "I'm a winner" at the end of a battle. The controls are pretty responsive and easy to use as well. People of any age should be able to grasp this game pretty quickly.

As bright and colorful as this game is, it's bound to catch the attention of kids. Thankfully, it's pretty clean and there's not too much to worry about here. Rabbids are known for their silliness and there is a scene were a couple of them are kissing.  The first boss is Rabbid Kong who loves bananas. Once you remove his stash of healing bananas, he gets upset. He’ll then take the offending character and wipe his butt with them, and then throw them. There are some other instances of potty humor with various bodily noises that the Rabbids make. The word "hell" is also used in the game. Last but not least is the cartoon violence which is a given in any Mario or Rabbid title.

If you’re a fan of turn based strategy games and appreciate the Mario and Rabbid games, you’ll definitely want to pick up Mario + Rabbids Kingdom Battle. The crude and silly humor will entertain kids and the challenge will keep gamers of all ages engaged. The multiplayer co-op mode is fun as well if you have another player nearby. This title is worth adding to your Switch library if you don't mind the Tarot cards and fortune telling.