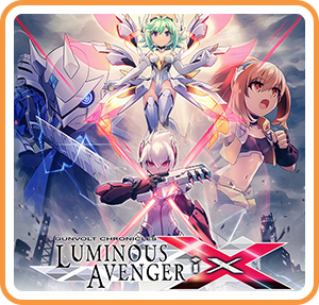 Gunvolt Chronicles: Luminous Avenger iX is an action-platformer made by Inti Creates, and part of the Gunvolt series. Though this is counted as a side game, it does not detract from it being quite fun!

Luminous Avenger iX shows cut scenes through pictures, like a visual novel. It goes over the main screen as an overlay, and has portraits on the left and right of the screen, with text on the bottom. After that, the it's just a pixelated action platformer in which you try to get a high score, defeat as many or all enemies, and get to the goal, ultimately reaching a boss for each stage. Feels natural in gameplay and is great to play. You use Copen's various abilities such as "bullit" dash, EX weapons, or his standard gun. It seems a bit daunting at first but you'll get it eventually! In general it takes a lot from Megaman (specifically Megaman Zero or ZX, as Inti Creates helped with those games) so if you have played Megaman at all you'll probably get this down pat or know how it works in some way or another.

There are quite a few things to work with here such as the aforementioned EX Weapons and an ability shop where you can buy extra Bullits, which are Copen's ammo. Determines how much of each action as said above he can do. The ability shop also has other stuff to either make the game easier or harder. The kudos meter from the previous two games is also back and if you get to 1000+ Lola, Copen's little combat pod robo gal will take the stage in human form and sing from a list of songs; one unlocks with each stage you complete, and it randomly plays one song from this list as you unlock 'em. There is also a leveling system which increases your HP as you level up, so if you're having a bit of difficulty you can just grind levels or money to buy stuff from the ability shop (which is named "CUSTOMIZE" in the games menu).

Some issues I noticed during Luminous Avenger iX is that one of Copen's powers, prevasion, which pretty much makes attacks useless against you as long as you have bullits (takes 2 bullits each hit) is actually disrupted by electric attacks and they end up hitting you directly. Most if not all bosses also have moves or abilities that can cancel prevasion and hit you directly for some reason. It's a bit weird since in Gunvolt 2, Copen's prevasion doesn't do this. Makes it feel a bit cheap for someone such as myself who sucks at these types of games and need prevasion but I guess since it's still beatable it's not a huge issue, but it is definitely weird. There's also the fact that while full body portraits look nice they don't have any expressiveness in the face portraits like the previous games had. Just one image for each character and that's it, except for a rare exception here and there. And it makes some moments kind of awkward because it's like "Hey, serious situation but the character looks bouncy and happy as ever?" 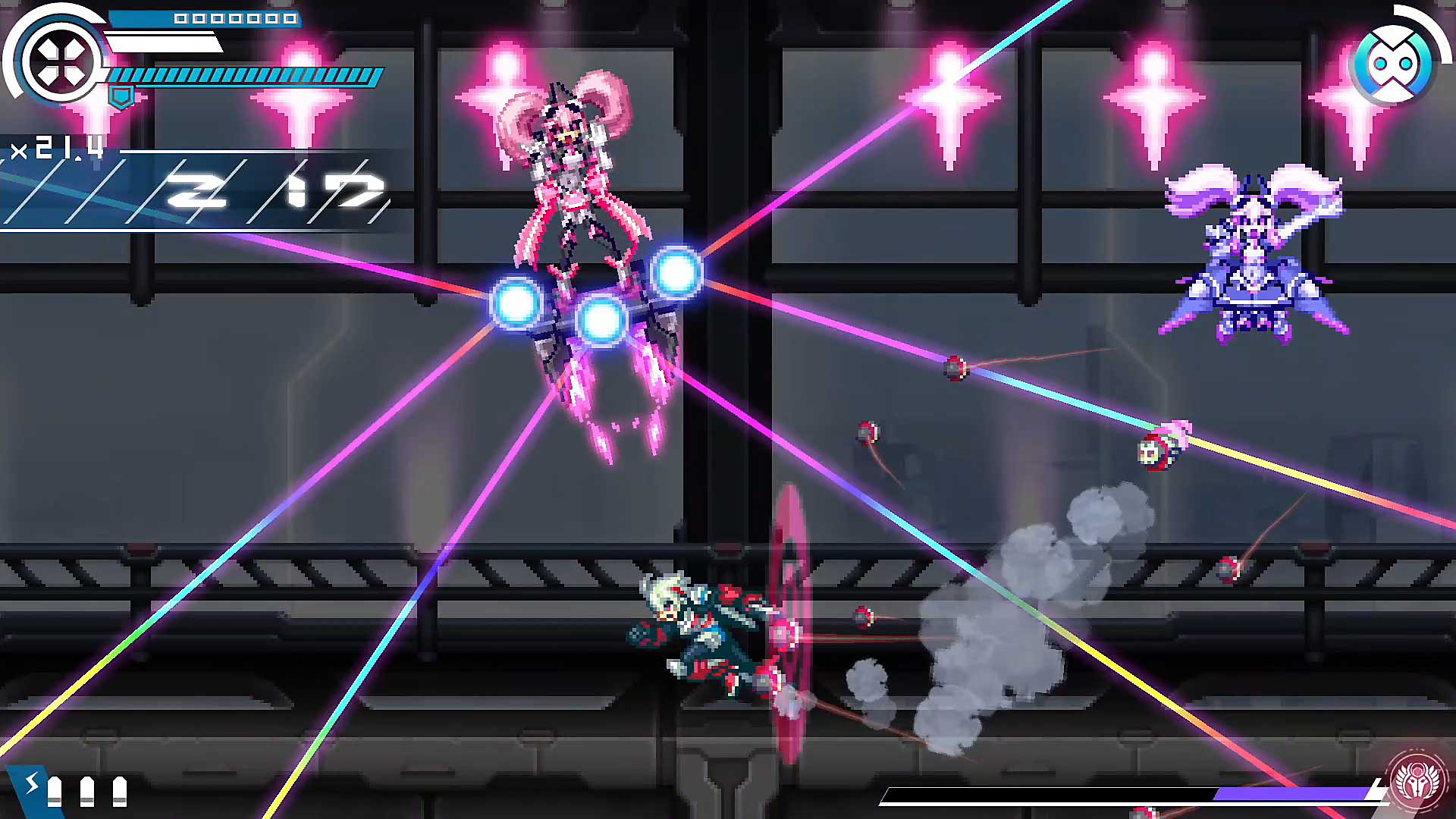 The controls also act a bit wonky when bullit dashing as if it doesn't want to go the direction you input, it can cause some mistakes and whatnot which can lead to a host of different situations that are bad for the player. There's also the final boss which was quite over powered, especially if you're fighting him for the first time... the prevasion thing I mentioned where certain bosses attacks/electrical attacks can make it through also makes it even harder than it really should be. It just makes it feel like some crazy learning curve is needed to put everything you know to the test and try to beat him as fast as possible if you're no good at dodging or too low a level and thus don't have much HP.

Despite any issues I may have with Luminous Avenger iX though, it is a solid entry if the story, music, and characters are considered. We see Copen (a Minos, which is to say, us normal humans) and Lola (His "Battle Pod", robot gal and partner) looking at a rather distressed city, and it seems that Adepts (humans with special mutant like powers) have taken the reigns and Minos (aka, us normal humans) are the minority being hunted down by Sumeragi. Now we start the first stage, and as we go through it we meet an adept named Blade who seems to have an electric "Septima", Septima being the powers that adepts have and use. After the fight it's pointed out that Blade is more powerful than Copen and as he goes to finish him off a figure appears and throws a smoke bomb, telling Copen to follow them.

Now, going into the music, it's amazing! The tracks for the stages seem fitting, the boss music is pretty good, with some specific ones for bosses on later stages, and the base music is pretty nice. There's also a "TALK" feature in the menu where you can talk and see conversations between the characters which helps flesh them out and give a bit more story while also having a few conversations that are tutorials of sorts. The reason I'm mentioning this is because the music that plays during these "TALKs" is pretty nice and soothing. There's also the Kudos songs, Anthem song, and Darkness Trigger song. Overall the soundtrack is pretty darn good. Oh! I also forgot to mention... Copen and Lola's main objective is to effectively take down Sumeragi by finding and apparently destroying the "Butterfly Effect." 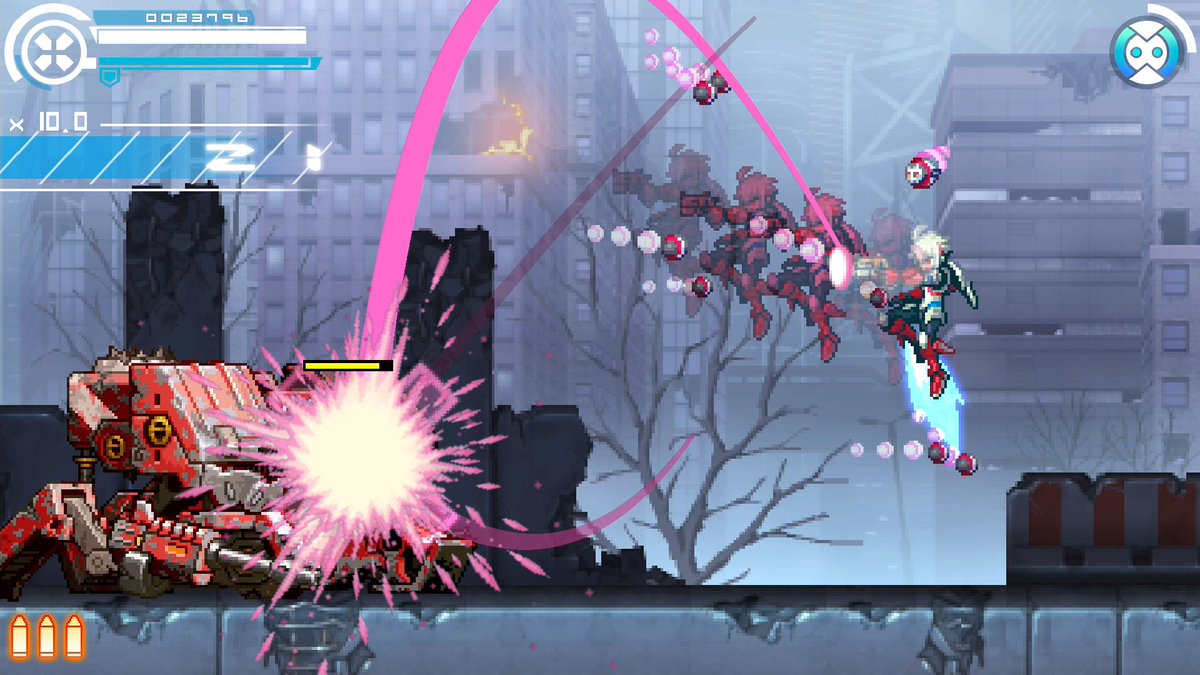 There's also one last thing I'd like to go over gameplay wise. Luminous Avenger iX has a lot of replayablity especially if you want to get everything, and all that but the controls and story are kind of the main issues with it. The story suffers from the fact that we don't have in-stage dialogue between characters as in the previous games and Lola just makes some random comments on how good you're doing. The only usefulness from it is that you can see whether a weapon is working on a boss very well or it isn't. Makes the story feel much shorter and there isn't much characterization as in previous games. The characters are very likable though and I really would like to see more of them in the future, however they decide to handle that! Especially Kohaku, she seems like a good heroine to be beside Copen and Lola.

Luminous Avenger iX has quite a bit of violence as expected when you're in a fight for your life and the life of your entire race, as by the time the story starts it seems a lot of Minos had been killed. Basically we're speaking of a full blown genocide here as they have and are taking extreme measures to make sure the only people alive are Adepts. There's also a bit of scant clothing as Kohaku shows quite a bit of belly, and whatnot. There are also unlockable outfits for Kohaku, one of them being a swimsuit, but the oddity of this is that no one seems to know what the unlock condition for it is. Either RNG or something else, no one is sure yet so maybe you might not encounter it... or maybe it's summer exclusive? It's a funny but weird quirk that we have here, I guess. Just be warned that costume and a few others may appear rather randomly! There's also the Idolatry part as one of the bosses Isola is apparently an Idol for Sumeragi and sings at concerts and whatnot, and then the fact that Lola's power is "The Muse" and she is called the "Muse of Hope" by the people who see her sing in her human form on a video sharing site such as YouTube, which can be also taken as a bit of Idolatry.

Overall, Luminous Avenger iX is a solid game and some great fun if you're a fan of either Megaman or the Gunvolt series itself. It has some small issues throughout but don't let that deter you as no matter what it is a fantastic experience for the price, and while we're not 100 percent on where this stands in continuity it is great for what it is. Hopefully any future games in the Gunvolt series help piece together where this stands story wise as a whole and that we see Kohaku and the other Minos characters in the future. Just be wary of the fact that there is some violence and dark subject matter in this and that there is a tiny bit of idolatry and suggestive things such as Kohaku's default outfit and some stuff later on in here can be very disturbing. Such as one of the bosses being a literal brain, or some of the conversation that occurs at the end. If any of this bothers you then this might not be the game for you but if you're fine with it then have fun enjoying the apeX of 2D action!