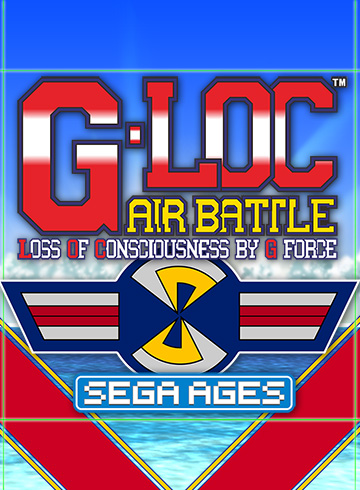 Thank you Sega for sending us a copy of G-LOC Air Battle on the Nintendo Switch!

If there was a time that could be considered the “golden age” of the arcade, I think most people would agree that the early 90s introduced some amazing cabinets to the world. For some of the great game developers of the day, it was all about experimenting with simulation. From the large racecar cabinets to the point-and-shoot gun displays, getting into the game was more possible than ever before. It was during this time that mega-developer Sega released its cutting edge flight-sim arcade shooter G-LOC Air Battle into the arcades. The large cabinet looked like the cockpit of a fighter jet, fully equipped with a flight stick and buttons for the machine gun and missiles. The surround sound speakers placed the player in the battle. For its time, that cabinet was as close as a child could get to experiencing the real thing.

It is now 2020, and one can pick up this vintage cabinet for an easy $4,000. However most of us really don’t want to spend that on a machine that is nearly 30 years old, so the next best thing is to play the game on the Sega Ages collection. True to its name (G-LOC is the medical condition in which someone loses consciousness because of the effects of G-forces on the body), this game is a fast and furious arcade shooter that allows the player to experience the best parts of flying a fighter jet...shooting down enemies. 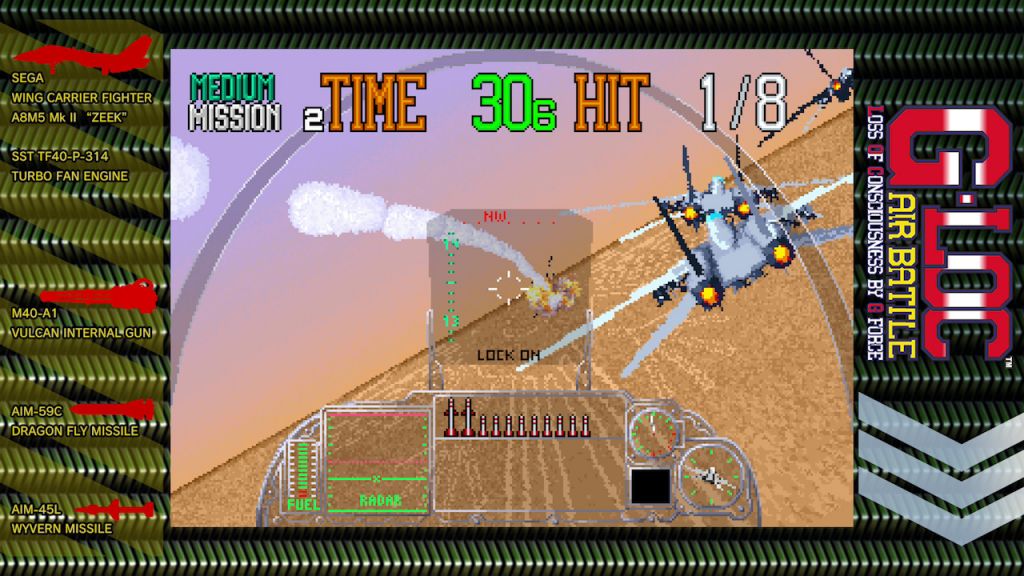 I was able to play the title on the Nintendo Switch, and the first thing that caught my eye was the display. Sega did a very good job of making this game look like it was being played in an arcade. The game display is surrounded by what looks like the actual cabinet that the game was played in. You can even hear the faint sounds of other games in the background as if you were standing in the arcade. It's a neat little addition to this title.

G-LOC plays exactly like you would expect an arcade shooter to play. You control the first-person view of the pilot, navigating your crosshair over the enemies and shooting them with either missiles or your Vulcan cannon. The controls themselves “float” quite a bit, which causes you to overcompensate often when targeting enemies. This type of sensitivity with the controls may have translated well in the arcade, but it doesn’t work well with the analog control of the console.

Graphically, the game looks pretty good for something that is out of 1991. In fact, the graphics of this title could easily give any game on the N64 or PS1 a run for their money, which says a lot about the graphics engines that were used in arcade cabinets during those days. The 3D Vector visuals of this game really show when an enemy gets behind your craft. At that moment, the first person view switches to a third-person view behind your jet, which allows you to maneuver away from the attack of your enemy. This point of view switch only adds to the breakneck pace of this game. 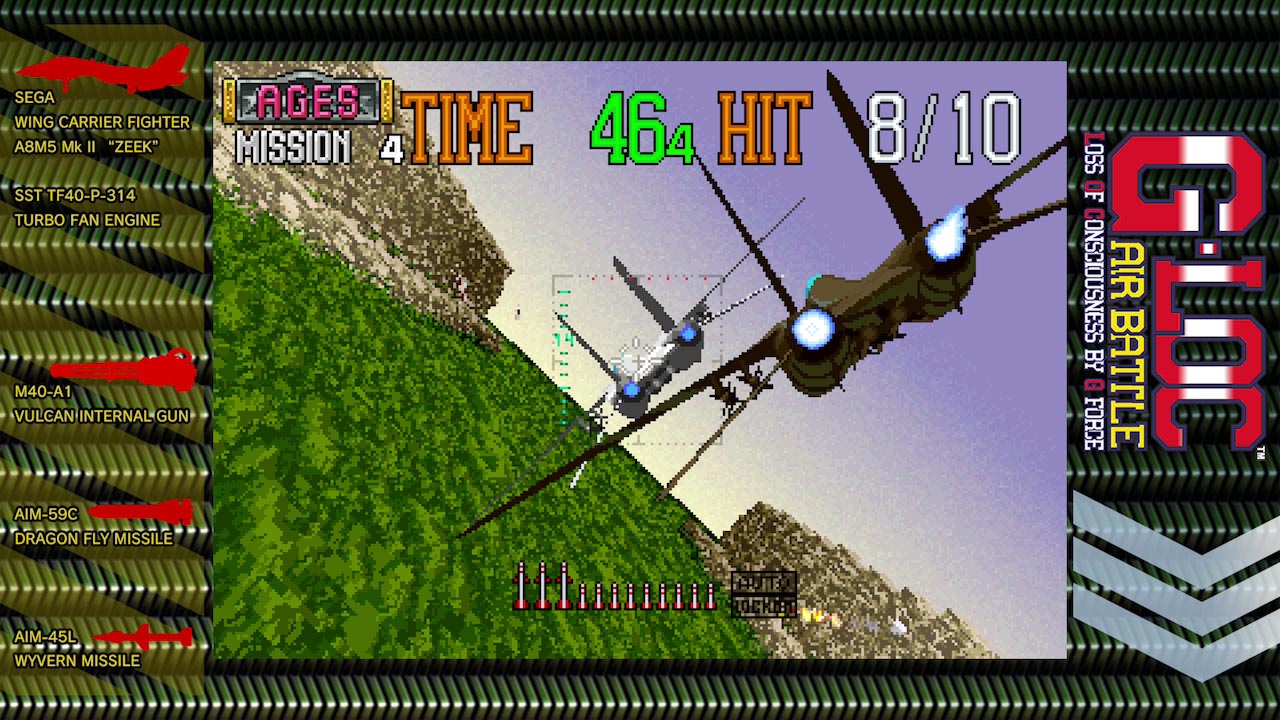 Despite being a very faithful port to the original arcade game, there actually isn’t much to G-LOC at all. You are able to play through a series of 12 different timed levels that give you a certain amount of enemies to destroy before you can move onto the next level. More game time is added to the run when you complete a level, so the object is to meet the enemy quota as fast as possible. And that’s it, rinse and repeat.

There are three tiers of difficulty the players can choose from at the beginning of each game. The enemies move differently depending on the difficulty chosen, and they can fire back as well. Unlike many arcade shooters, in G-LOC you get to control the jet in order to dodge enemy fire. With the controls handling the jet like a tugboat, it is very difficult to perform the much needed evasive maneuvers. Once again, this is an area that probably works better in the arcade than on a console.

There isn’t much to this game beyond flying a jet, shooting enemies, and trying not to die. The violence in G-LOC is very minimal, pretty much being limited to shooting down enemy aircraft that we can assume has human pilots. There is no strong language because there are barely any words spoken at all aside from “Fire,” and “You’re out of missiles!” The gameplay just fails to bring anything new to the table for today’s average game player.

It is for that reason that I believe this game, even though it is a great nod to a legendary arcade title, is a shallow gaming experience at best. Sega Ages does a great job of bringing back old Sega IPs that were lost in time, but that doesn’t mean all of them to play very well on a game console. G-LOC was meant to be in an arcade and its fast-paced gameplay was designed to gobble up quarters from kids as quickly as possible. I believe the only crowds that will get into this title are arcade enthusiasts and curious collectors. But don’t take my word for it, at a generous $7.99, this port beats shelling out four grand for the actual unit.