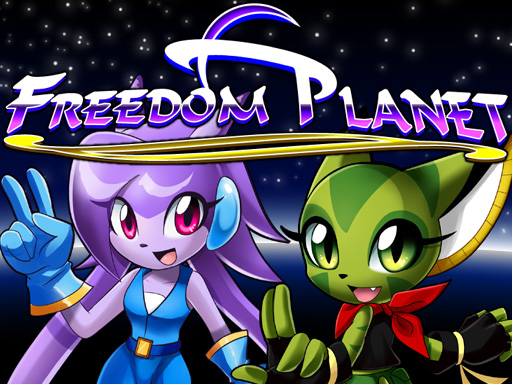 Thank you XSEED Games for sending us the Switch version to review!

I have always enjoyed the classic Sonic the Hedgehog games, even if I never did beat any of them; I was a Nintendo kid, and only had friends with a Sega Genesis. Nevertheless, it was hard to deny that Sega had a great series that made lasting impressions on those who played it. A few years ago, I became aware of Freedom Planet, which is one of the best non-clone homages to Sonic out there, or at least as far as I have seen. I was pretty excited about it, picked up the PC version, and instantly fell in love with it; but I never got far enough to review it. Now that XSEED Games is releasing the game again on Switch, I just had to take the chance to give this game the time it deserves.

Ever since the indie game revolution from a few years back, there have been several standouts that really did a wonderful job of not only paying homage to classic gaming, but even improving on it. Shovel Knight is clearly one of them, and I would say that this one is another. It’s not a perfect game, as there are a few rough difficulty spikes, but overall, it’s a truly excellent adaptation of what made Sonic so great, and it takes it to the next level. 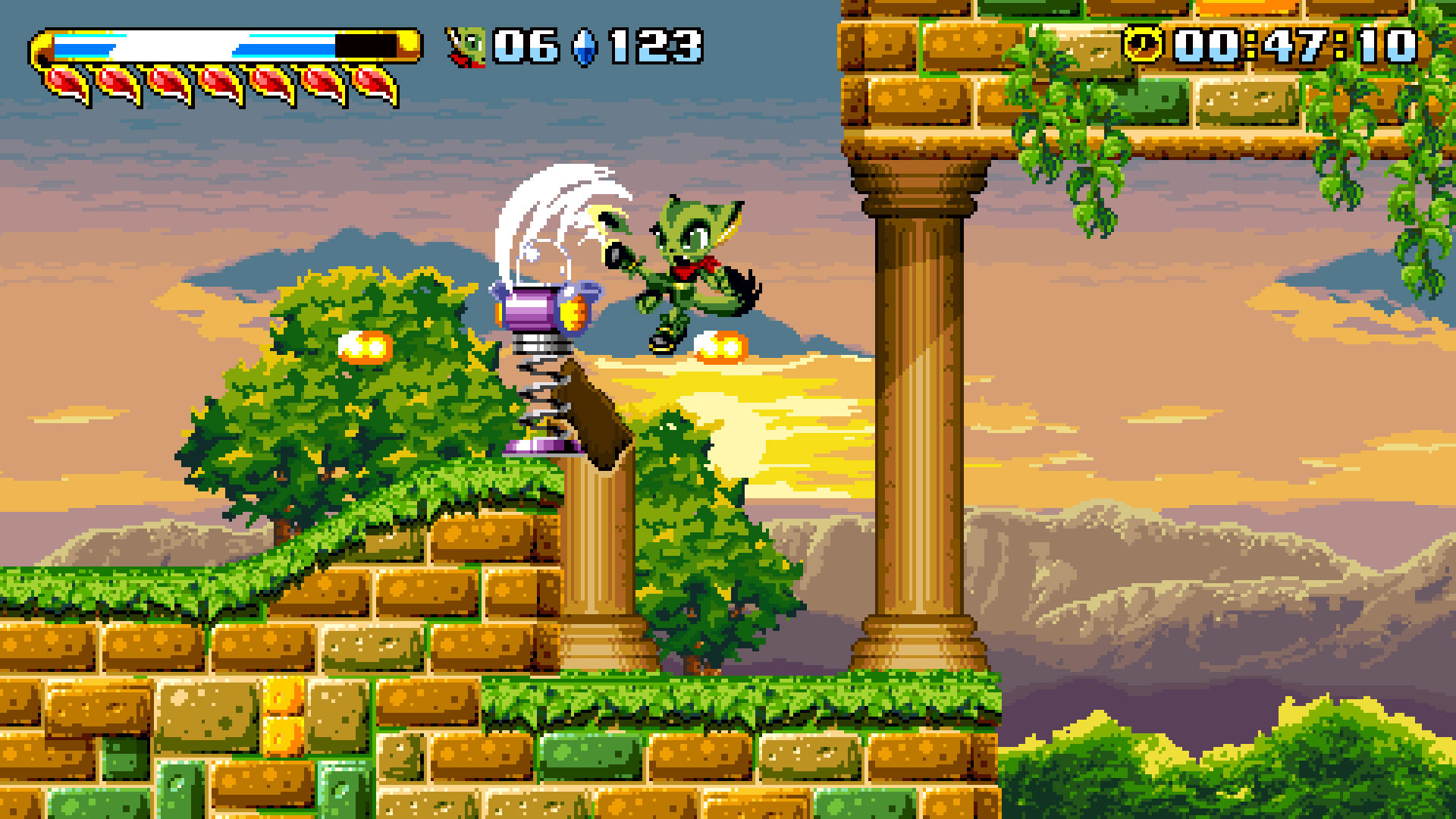 Freedom Planet takes place on planet Avalice, where the people rely on an artifact with seemingly endless power called the Kingdom Stone. A few kingdoms want this power, and there is a very fragile peace, and an alien invasion that sets off death and destruction. A group of friends, Lilac, Carol, and later Milla, find themselves thrust into the middle of this conflict, as Lilac’s endless sense of justice and helping others drags them all into an intergalactic conflict. The cutscenes are fully voice acted and extremely well done. The only difference between the two modes that you choose when you start the game, Adventure or Classic, is whether or not you can watch the cutscenes; Classic skips all that story stuff and gets right to the action.

If you have ever played one of the classic Sega Genesis (or GBA) 2D Sonic games, then you have a pretty good idea how this plays, but even still, there is more to it. For those who have not, each level is a massive and detailed 2D side-scrolling platformer, with lots of hidden secrets, ramps, circles to spin through, and so on. It is very fast paced, and there are many paths you can take from beginning to end. There are flower petals to collect, and if you get two hundred of them, you get an extra life. There are also protective orbs you can grab, not unlike other games of this type. Every level has mini-bosses and end bosses, and they can be quite challenging as you often have to memorize their patterns in order to defeat them.

Unlike Sonic, each character has physical attacks, and the three play uniquely. Lilac is the most Sonic-like, with a spin dash like move, and spin attacks that bop the enemies senseless. Carol is a cat that attacks with her claws and various martial-arts attacks. She can also grab her motorcycle to really mess things up or get to difficult places. Milla plays really uniquely; she can jump, flutter her dog ears, and create gel blocks or a shield out of thin air. Each character plays very differently, and is worth a replay if you love the core game, which you just might; the level design is fantastic. 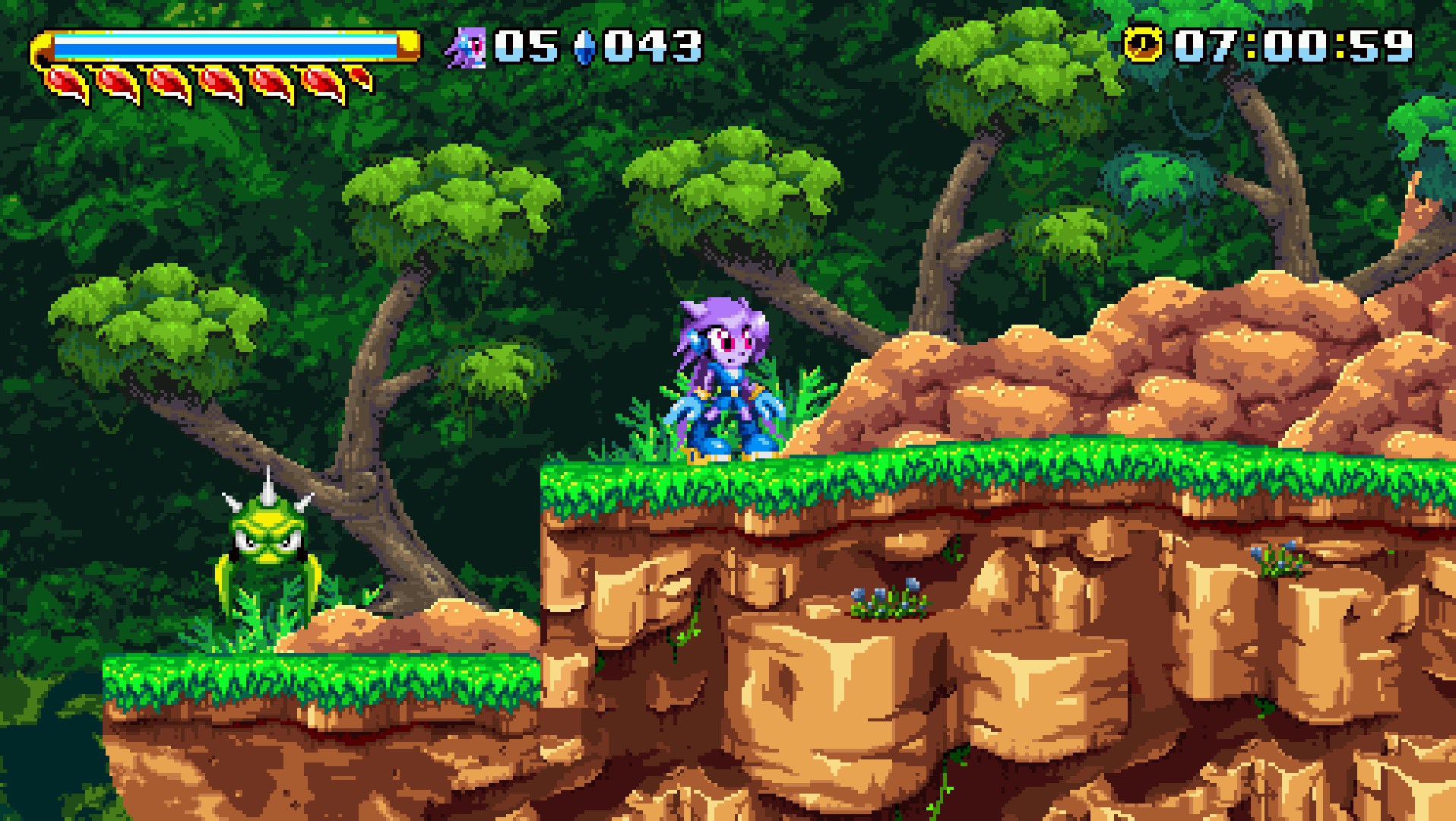 Graphically, the polish and pixel art are quite something to behold. If it wasn’t for the widescreen presentation, this could easily have passed for a 1990s game – and that’s a compliment. The characters look excellent, the background and enemy animations look great, and the music is a really nice mix of synth and instruments. It’s a great soundtrack, and I’ve considered picking it up. The voice acting is the other thing that gives away that it might not be a 1990s game; it’s also great, and fully voice acted.

It’s pretty safe for most audiences, as the violence is typical classic fantasy violence where you smack various robotic or organic creatures. However, in the Adventure mode, a few of the scenes later in the game are quite disturbing, as you witness Lilac being tortured by what appears to be an electric shock by the enemy. It’s extremely unsettling; you may want to have the youngest players stick with Classic mode.

Freedom Planet is a wonderful homage to the 16-bit Sonic formula, and in many ways, is even better. It’s a blast to play, performs perfectly on both PC and Switch, and is incredibly easy to recommend to any lover of platform games. It’s a game that I’m long overdue in reviewing; if you have even the slightest inking of interest in a game like this, you won’t be disappointed; the price is more than fair.