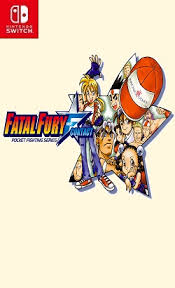 While my formative gaming years included the 1980s and 90s, and I most definitely played a lot of other Neo Geo games (with Samurai Shodown being my most played), I had occasionally but not consistently played some of their other fighting games, like King of Fighters. One of the things I love about reviewing games like this is it forces me to become at least somewhat familiar with other classic titles I never got around to playing, in this case Fatal Fury.

Fatal Fury: First Contact was a Neo Geo Pocket Color (NGPC) 2D one-on-one fighting game that was released way back in 1999. Now, if you were like me and didn't realize what a Neo Geo Pocket Color was, you might have thought that it was just a smaller Neo Geo. But that is most certainly not the case! A Neo Geo Pocket Color was SNK's more or less direct competitor to Nintendo's Game Boy Color (GBC). Unlike the Game Boy, the Neo Geo Pocket did include more powerful hardware - a 16-bit CPU being the main improvement. But in other ways, it was fairly similar, with a small and low resolution screen, two face buttons, and a rather basic sound chip (while I'm not certain, based on what I'm hearing, the NGPC's sound chip might even be worse than the GBC). Given that SNK's main expertise has been fighting games, of course they would release their popular franchises like Fatal Fury on their new handheld. Strong Points: Good emulation of a classic game; two-player mode is really neat; fighting mechanics are solid
Weak Points: It emulates the Neo Geo Pocket Color, which had graphics, sound, and controls about on par with the Game Boy Color, while the much better looking and playing Neo Geo prequels are available for the same price
Moral Warnings: Fantasy violence, as you beat up your opponents with various weapons, kicks, and magical attacks; use of tobacco according to the ESRB

This game is part of SNK's new line of Neo Geo Pocket Color re-releases on Nintendo Switch. I recently reviewed The Last Blade: Beyond the Destiny, and this is the second title I got to check out. While my opinion of this game is largely similar to my opinion of the other one, this is still a unique title worth looking at for fans of Fatal Fury.

Being an emulated title of a Neo Geo Pocket Color game, the graphics and sound are incredibly basic. Their most recent full Neo Geo title right before this one is 'Real Bout Fatal Fury 2', which is also available on Nintendo Switch, and I happen to have on PC from a long ago Humble Bundle. I put most of my thoughts in the video review below, where I compare them directly.

Unlike the aforementioned The Last Blade NGPC game I reviewed, this game basically only includes two very simple game modes: one player, where you fight against one AI opponent after the other, like most other fighting games, and two player, where you play against another player simultaneously.  If playing docked, it shows that the software is emulating two Neo Geo Pocket Colors, then shows you player one's screen, and each player battles it out with their own controller like normal.  If you play on a handheld Switch, it does something neat - the game launches two screens, each pointing sideways towards the controls on each side.  What this means is that two players can play at the same time, holding one side of the Switch each!  Multiplayer should be possible even on a Switch Lite.

From an appropriateness standpoint it's pretty clean; animated one-on-one violence, with no blood or anything, and the ESRB notes the presence of tobacco, which I could not find when I was playing it. The graphics and sound are... not great, but that is to be expected given the nature of the source. Animations are reasonably smooth, and combat feels decent enough.

Mechanically, it's a pretty solid fighter, with the A and B buttons performing various attacks, like punch and kick. If you press for a moment longer, it performs a strong attack, which varies per character you play with. There is a built-in manual that includes character attacks, as it displays the entire original printed game manual on screen. All character moves are also listed in the manual, making it a great online reference. You can access it at any time by pressing the minus button. There are eleven characters to start with, along with two others who are unlockable. All but one are also present in Real Bout Fatal Fury 2, the title that this is based on.

And really, that's the main challenge with a game like this. Do you buy this quirky, low-tech title, or do you buy the Neo Geo arcade game that it's based on for the same price? In my opinion, if you have to pick one, go for Real Bout Fatal Fury 2. But if you're a collector, have already played tons of the arcade title, or are just looking for something a little different, or thing holding a Switch horizontally for two players is the coolest thing ever, then Fatal Fury: First Contact is definitely worth looking at.