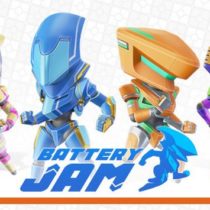 Thank you Halseo for sending us this game to review!

Battery Jam is the first game released by Halseo which was formed by three guys who met in college. Your goal in this title is to turn the majority of the floor tiles to your/team color before the two-minute match ends. Neutral floor tiles can be converted by simply walking over them. Changing over colored tiles takes a little more strategy. Thankfully, there’s a handy tutorial to teach you the basics.

Tiles can be raised for cover or destroyed to reveal the lava underneath them. Pools of lava can be dashed over to create tiles of your color. Each robotic player is equipped with a stun gun that can be used to knock players into lava or slow them down a bit. By mashing the A button, the gun effects can be reduced significantly.

A couple of Boomboxes spawn on the levels and there are multiple ways they can be used. Shooting at them will cause them to move/detonate. If you take down another player with a Boombox, the surrounding titles will turn to your color. If not, the box will simply explode in a few seconds and the blocks in its radius will revert back to lava.

In the event that your character dies, they will respawn in a few seconds. Eliminating a player does buy you some time, but I found focusing on converting blocks more effective in the long run. The block conversion progress is tallied up in real time so you can tell who is in the lead throughout the match.

There are two game modes: Classic Jam and Team Jam. The same rules apply for both modes, but the second one lets you team up instead of having it be a free for all. Multiplayer is limited to local only, but if you don’t have anyone to play against, you can add in some bots. The bots have five different difficulty levels and playing against the middle (3) setting was sufficiently challenging for us.

In total, there are eight maps and many of them have different themes. Unfortunately, some of the other maps just have a different color palette or background. Speaking of color, it’s nice to see a color blindness mode to make it easier for some players to enjoy this game. 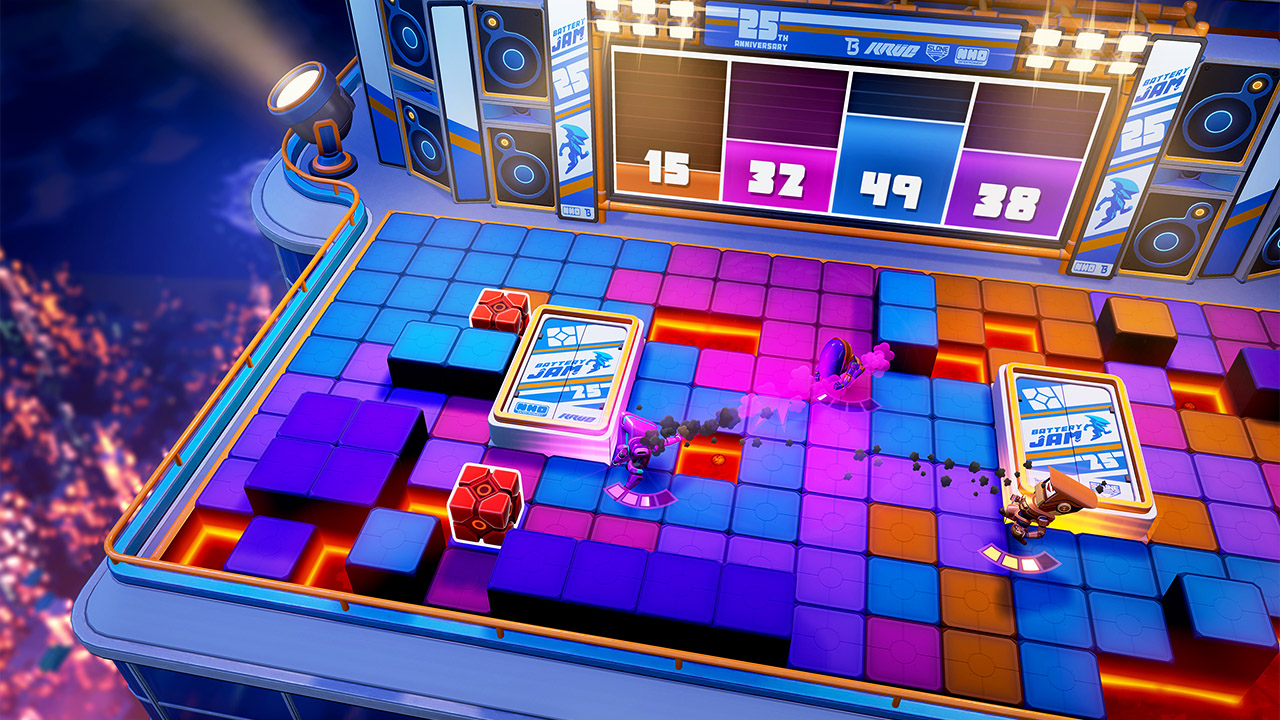 Two game modes and eight maps aren’t going to keep things very interesting for long. There are many game options and customizations to keep things fresh and exciting. The number of Boomboxes can be changed or removed altogether. Teleporters can be added to the maps. The match length can go from a minute to an hour or even an endless mode if desired. The respawn rate of the players and Boomboxes can be changed as well. If you just want a deathmatch style game you can change the winning condition to number of kills instead of tiles claimed. There are some handy preset options and deathmatch is one of them. So that technically makes it three game modes available.

The background music is energetic and perfect for the frantic gameplay. The sound effects are fitting and get the job done. Voice acting is non-existent as the robots don’t talk and there is no announcer. The body language and facial expressions of the robots are great though.

From a moral standpoint, this game is pretty clean. You can shoot at and knock robots into lava. Other than that, there isn’t any blood or gore to speak of.

Overall, Battery Jam is a cute game that can be enjoyed by the whole family. With the little level variety and gameplay modes available, this title won’t entertain for long periods of time. It is fun in short spurts and the price tag is pretty reasonable. It’s certainly worth picking up on sale. I look forward to more titles from this developer.