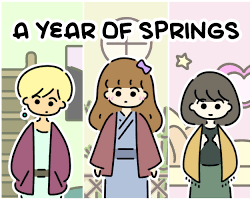 A YEAR OF SPRINGS is a visual novel collection consisting of three games and an epilogue that is unlocked when the player beats all of them. All of the games center around the lives of three characters: Haru, a transgender woman; Manami, Haru’s childhood friend who supports Haru all the way through; and Erika, Manami’s other friend who has a desire to learn about everything.

The first game, One Night, Hot Springs, the player sees the world through Haru’s eyes, as they navigate trying to bathe in the hot springs without bothering anyone at Manami’s birthday party. There also happens to be a staff member with a transgender sibling at the spa, so she helps out Haru with arrangements for a hot spring. Most of this game is basically just Haru talking about experiences as a transgender woman, being denied access to the spaces that they believe they belong in. Erika mentions she has dated a girl in the past.

The second game, Last Day of Spring, switches over to Erika’s perspective as she tries to book a spa day for Haru’s birthday, but gets turned down over and over and over again because Haru is transgender. The game tries to frame it as an injustice that Haru (who has not undergone any medical procedures, by the way) cannot enter women’s spaces despite identifying as and dressing like a woman. Erika also happens to discover that she has a crush on Haru (who at one point she impulsively asks to kiss).

Strong Points: Cute and distinct art; fitting music; interesting story, hint hearts for choices
Weak Points: The plot, while fairly interesting, is somewhat weak; story does more telling than showing
Moral Warnings: Light swearing (h*ll used a couple times); game revolves around the concept of sexuality and gender; brief conversation about sexual arousal; two characters that are both supposed to be girls end up dating and moving in with each other; heavy focus on transgenderism; bisexual character; “aro-ace” character (aromantic and asexual)

The epilogue catalogs Erika and Haru moving in together.

The controls are pretty simple, as this is a collection of visual novels. There are optional hint hearts to try to direct the player on the "right" track for the “good" ending in any particular game, but it isn’t obvious at first glance what they are there for. The "good" endings are all basically where the characters discover and affirm their identities.

The music is pretty calm, and it fits the tone of the game for the most part. Some of the topics are a bit heavier in nature, and the music doesn’t really tend to represent that. Sound effects are not present, but they don’t really need to be. There isn’t voice acting either, but since the game developer is independent, this is forgivable.

In my opinion, the art is the best part about A YEAR OF SPRINGS. It’s cute, simple, and gets the point across. The art style is very distinct, which is fairly hard to achieve in the visual novel industry while succeeding. The story was interesting, but in my opinion it was basically nonexistent without the characters’ identity crises, which were a bit much for me. It'd be one thing if said identity crises were just a subplot, but they are literally the entire story. The player learns nothing about these characters outside of their "struggles" as portrayed in the story. What were their childhoods like? What do they want to be when they grow up? What are their interests, their hobbies? Who are they? They player doesn't get any of this information. They only get bits and pieces as they relate to the identity crisis.

Morally speaking, the list of issues goes on and on and on. I tried to touch on them in the mention of each game. Something I didn’t mention is that there is some light swearing (in the form of h*ll being used a couple of times – and not in reference to the place).

The entire plot of the games revolves around gender and sexuality in some way. In One Night, Hot Springs, it revolves around Haru explaining the day to day challenges of being transgender to Erika, who mentions she is bisexual (she says that "she dated a girl once"). In Last Day of Spring, it switches to Erika, where she struggles to book a spa for Haru's birthday, and finds it outrageous that a transgender "woman" can't enter women's spaces. In Spring Leaves No Flowers, Manami goes on to discover that she is "aromantic and asexual," which is basically a fancy way of saying she doesn't really feel romantic attraction (supposedly, that is. Manami has a boyfriend throughout the entire series). In this game, there is a point (which is probably supposed to be a pivotal moment) where Erika asks Manami if she has ever felt proper sexual attraction. In the epilogue, Erika and Haru end up moving in together, and they mention that they needed "an LGBT-friendly realtor" in order to do so, as the series takes place in Japan.

In the special thanks section of A YEAR OF SPRINGS, the developer wrote that they “hope that in the future, the world will be a kinder & more accepting place for Haru, Erika, Manami, and all of us.” I am assuming this means the developer made this game to, as they would probably put it, “spread awareness.” While we as Christians cannot accept their identities as they are not right, we should instead take these words as a reminder to love everyone as they are, Christian or not. As malicious as the transgender movement may come across to be, they are still people and God loves them nonetheless. They are simply lost.

The ESRB rating says T, but I personally would not recommend this to anyone under the age of 18, unless they have a very clear grasp of themselves and the world around them. Even though A YEAR OF SPRINGS isn’t particularly explicit in anything it does, it takes a lot of maturity to approach a perverse topic like this with the right lens in mind.