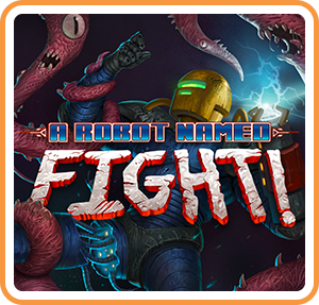 Thank you Novy Unlimited for sending us this game to review!

I have a love-hate relationship with Roguelikes (or Roguelites, which this game technically is, but the developers call it a Roguelike and I don't care enough to correct them). But I love Metroidvanias. So, would I find that I love this game, or hate it? After all, two out of three loves is pretty good, right? Well, my answer is yes to both. But before I get into that, I should probably explain what makes up each kind of game.

A Roguelike is a game that take certain important aspects of a classic from the earliest days of computer gaming, called Rogue, and takes some of those critical gameplay mechanics and brings them to the modern age. While the most proper Roguelikes are turn-based, A Robot Named Fight! is not. Instead, it is a real-time action platformer. But what it does do is borrow other features, including randomly generated levels, permanent death, and some form of resource management. Personally, I find that randomly generated levels can be great fun, but I am far from a fan of permanent death, despite understanding why it's done.

A Metroidvania is a genre that has been made popular via the two founding franchises that make up the name: Metroid and Castlevania. Almost all Metroid games provide the template that A Robot Named Fight! clearly borrows from. The Castlevania side refers to the later 2D entries, not the original NES and SNES level-based classics. These games make use of mechanics where areas are initially locked out, but as you gain skills and power, you can return to earlier areas with your newfound abilities and access those areas. It's a very enjoyable gameplay loop that has formed the basis for some of my favorite games of all time. 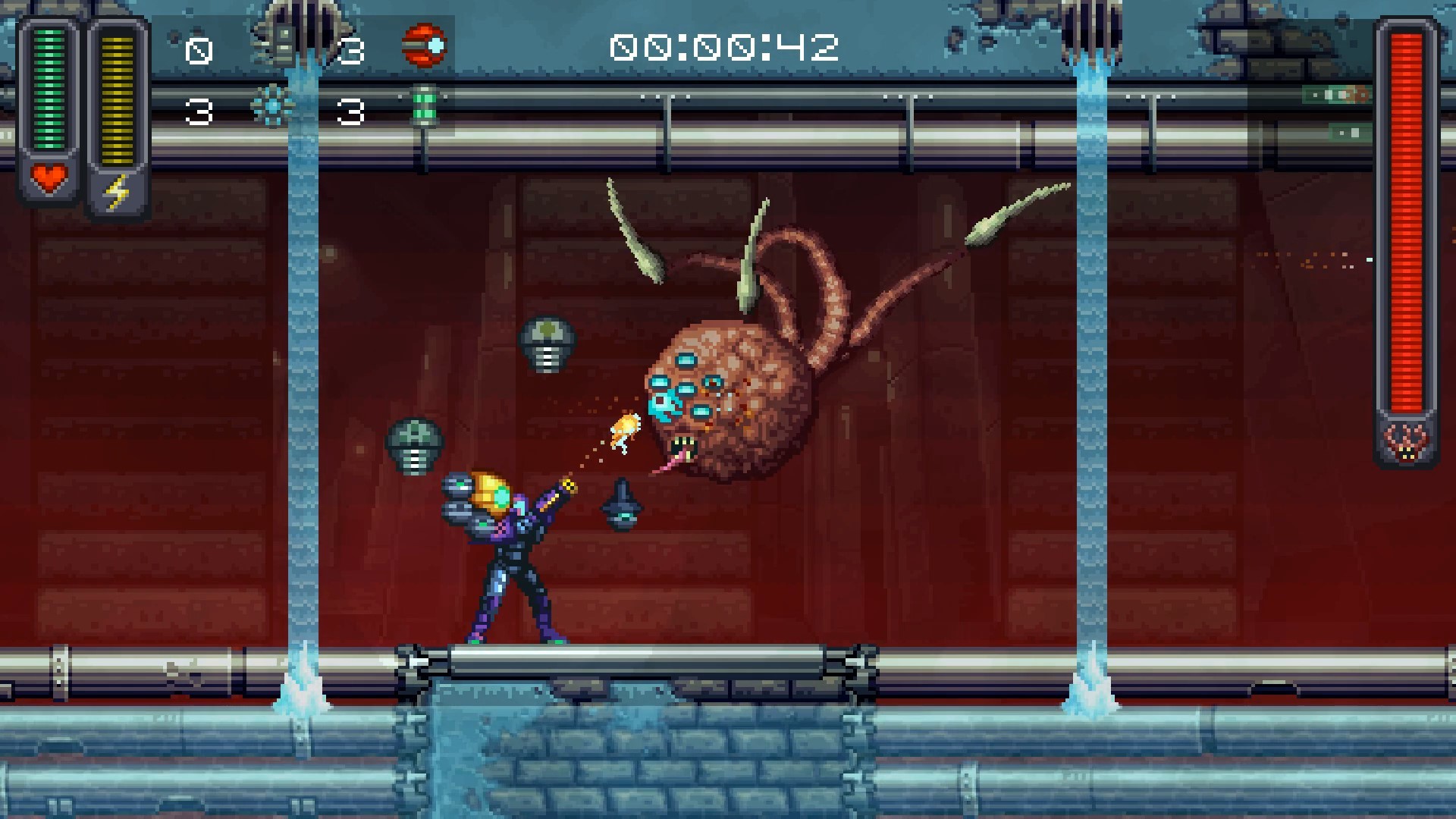 Strong Points: Mechanics that work well; nice music and sound effects; 16-bit style graphics that work well; great value for the money; no two playthroughs are ever the same; deathmatch and co-op can be fun
Weak Points: You have to like the compromises that Roguelikes offer to get the most out of this game
Moral Warnings: Lots of blood and gore, and blood can only go from 'high' to 'low'; lots of fleshy creatures will be shot and killed by your robot

A Robot Named Fight! is a 2D, side-scrolling action-adventure platformer with completely randomized levels, and if you die, that's it - game over. You have to start all over again from the very beginning, and what you learned last game is basically for nothing, as the map this time will almost certainly be totally different. You play the game as (you guessed it) a robot named Fight, and your job is to defeat the Megabeast and its many fleshy spawn. You start with a simple blaster on your arm, and as you find upgrades, you can do more damage, move faster, gain special abilities, and so on. Each time you kill an enemy, there is one less meat-based creature in the world; the blood on the walls as well as the chunks rolling everywhere prove that your mission is for the good of the robots.

The environment and high-quality pixel art clearly take a majority of its influences from the classic game Super Metroid. The atmosphere is dark and brooding, with lots of darker colors that make up the world you get to explore. The layout of the game world, especially the doors between levels, looks like something right out of Metroid. I personally don't find the blatant borrowing of ideas from a classic like Metroid much of a problem, but if you prefer more original ideas in that sense, look elsewhere.

My experience with this game is a bit of a roller coaster. At first, I didn't really like it, which is why I put it down for a while. It seemed like a Metroid clone, that was perhaps a bit too close to the source material. But I died a lot. I picked it up again a bit later, and I started to see the good in it. While the obstacles are somewhat common, I found it interesting that the randomizer may choose to offer you a different way to get past them. In one run, you may get the slide skill to go under small spaces. In another, you might get arachnomorph, that turns you into a spider to crawl under them. In others, you may simply have to find another way around. These same types of adjustments apply to blast doors, tall corridors, and so on. The game usually provides a way out, but at the same time, I have occasionally found myself completely stuck with no way out; restarting was my only recourse. I was more than a little upset when that happened.

When you die, that's it. If you got far enough or the random number generator was kind enough, you may find that you unlock new enemies, bosses, weapons, items, powerups, or even entire regions for a next playthrough. So the variety of the game continuously increases the more you play. It's a neat system, but also simultaneously my biggest frustration with it. 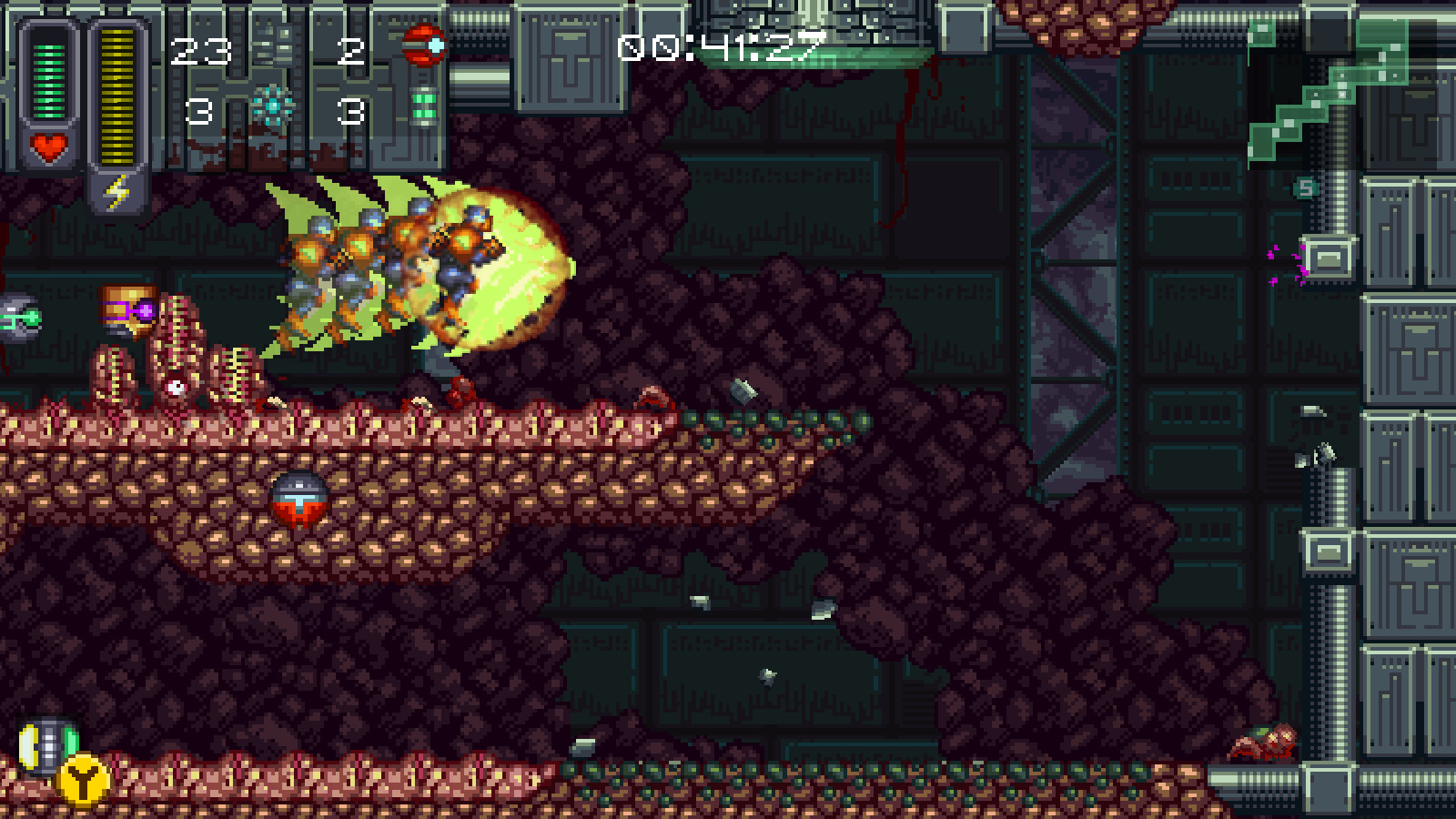 I don't mind that the levels are generated. I think that's great! I don't mind that the weapons and powerups also change each time. I love that, too. But what I don't like is that there is no option or difficulty level where death does not mean a game over. While I am far from unskilled, I also don't have the patience or twitch reflexes that I may have had twenty-five years ago. (Yes, I have been gaming for a long, long time.) So when I make a stupid mistake and have to start completely over, it is more than a little irritating. While it is possible to discover a single-use save spot, and that helps, I would say 9/10 times I end up needing it within just a few minutes of discovering it. Why? Because the game tends to drop those just before massive difficulty spikes. Oh, and speaking of spikes, I tend to die from those far more often than actual enemies.

My game playing style has tended to be more about perseverance rather than pure outright skill. I make it through difficult boss fights by keeping at it, trying over and over, until I finally figure out the patterns and make it. I conquer challenging platform segments by pushing through it with no fear until I finally make it to the other side. This game, and games like it, punish behavior that most other games reward. I get that change can be good, and in a way it's great to take a different approach. But for this older gamer, I just don't have it in me anymore. I officially hate Roguelikes with permadeath. There. I said it. If I can't learn from my mistakes and try it again, I don't want to have anything to do with this kind of game anymore.

A Robot Named Fight! is a good game that, for me, the bad of permadeath outweighs the otherwise very good gameplay. But I know for a fact that other gamers I know well will absolutely love it. I always enjoyed my time playing it, but the fact that I will likely never beat it means that I doubt I'll play this game very much ever again, which makes me sad. When I found out that it was made by a single developer all by himself, it was even more impressive to find out what he's done. It is very bloody and gory, but otherwise, the appropriateness is common to other action games. I just hope that losing all your progress each time you play won't drive up your blood pressure, or add foul language to an otherwise clean game!