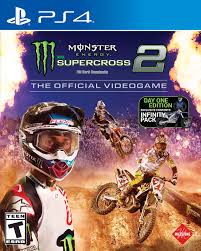 Thank you Milestone S.r.l for sending us a review code!

Monster Energy Supercross – The Official Videogame 2. That is the official name for this product. Quite a mouthful don’t you think? Since I like my fingers, I will refer to this game as Monster Energy Supercross 2 or MES 2. As one can guess from the title, it is a racing game based upon the real-life extreme sport. Frankly, I know very little about Supercross or other off-road sports—I haven’t even played the original game, so I walked into this with no real attachments. I do, however, like racing games so I wanted to give this a shot.

Monster Energy Supercross 2 starts off with an optional tutorial, but if you’re like me and haven’t played the series or genre before you’ll want to opt in as the controls take some time to get used to. Even though the basic controls are pretty much like every racing game (with the right and left triggers to accelerate and brake respectively), they have a type of responsiveness—almost like you’re driving a vehicle. Turning has a small delay before being sharp in action and stopping is almost immediate. Those who are used to more floaty mechanics will make constant mistakes when starting out.

Fortunately, the tutorial does a good enough job teaching people the ropes. Some of the more forgiving mechanics, such as translucent arrows to point out the best trajectory for a jump, automatic weight adjustment for optimal landings, and the rewind feature that lets you rewind back to a specific point to undo mistakes, lessen the frustrations that newcomers will experience. Experts have the option to turn off some or all of these assisting features for a more authentic and realistic challenge.

After the tutorial, you can create your character. You can choose the character’s first and last name, the nickname displayed on the back, a number to represent you or your favorite rider, and even their height and facial features. The facial features aren’t too plentiful, but the number of helmets and suits more than make up for it. There are thousands of combinations to choose from, with many of them being based on or are real-life attire. My favorite is the special attire, which you can only unlock from beating certain challenges or reaching certain levels. They, in particular, invoke the “videogame” portion in MES 2, with a cool-looking lava suit being unlocked through a very challenging requirement. 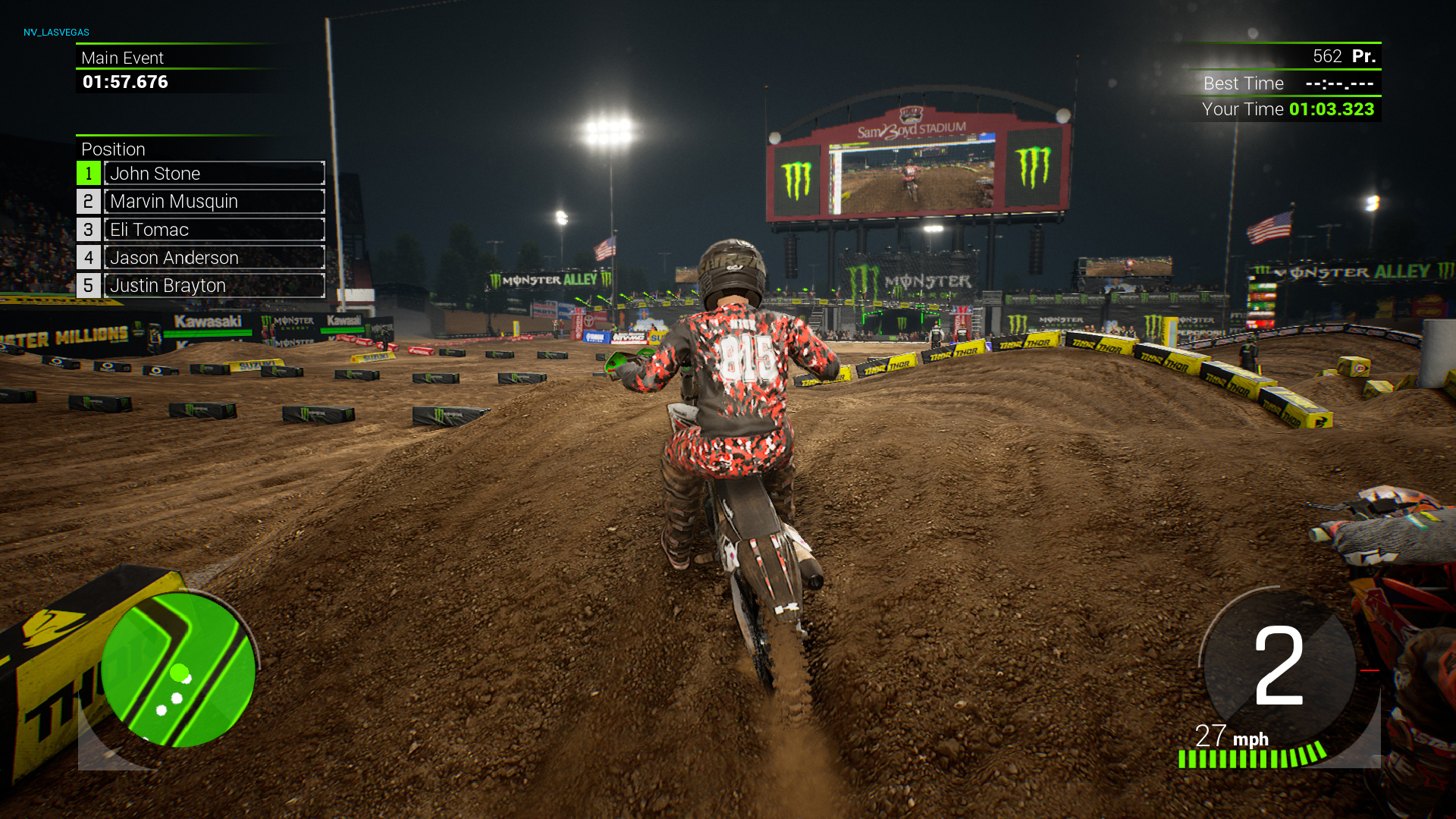 Strong Points: Great customization options and level editor; environments look great; motorbikes have weight to them; accommodating to new players
Weak Points: Frequent and long loading times; the grind can be overwhelming to some as there is a ton to unlock; AI can act rather strangely in some cases, and unfair in others
Moral Warnings: Supposedly the word “sh*t” is used in some of the lyrics of songs according to the ESRB; some songs also contain mentions of drugs and alcohol

Most customization items are obtained through credits, which are earned by simply playing the game. Credits don’t take too long to accumulate even for the most expensive items, so going for the parts that you specifically want isn’t a lengthy process. Getting all of the items in the game, however, is quite the monumental feat to undertake. Good for some who want to sink a lot of time into one game, but unfortunate for others as the sheer grind may turn them away.

Career mode is one of the main modes available in the single-player portion. You take your created character and partake in the 250 East/West or 450 Supercross and aim for the top. The 250 lasts about 9-10 weeks whereas the 450 is a 17-week journey. During each week, you get a rotating set of three free days and two rest days, with every Saturday being the event day, and two free days and three rest days for the following week. For the free days, you have the option of filling those days with training your skills by completing tasks to improve your braking, turning or recovery time. Other options include challenging your rivals to a 1v1 race or time trial to lower their rivalry score (good for lessening the load on a particularly tricky rider), or promotional events to boost your credits or fame. Fame lets you take on better and harder sponsors that will grant you more credits per completion. The career mode has an RPG-like aspect to it—in the end, however, it doesn’t feel as substantial as it could be as the improvements to your stats never feel as crucial to a win as simply buying better parts to upgrade your bike.

Championship mode is similar to career mode in that the grand prix is the main aspect, just without all of the extra bits. If you don’t want to be bogged down by add-ons and only want racing, then Championship is the mode for you. Like most racing games, there is also a time trial mode. Milestone does something a bit unique with their time trial. Every time you beat a record, the game makes a ghost of that record, but slightly faster. It’s a great way to encourage people to further improve. Compound mode is kinda like the game’s free roam mode. Going straight to the mode doesn’t have much to offer. You’ll want to start this mode preferably after beating the 450 Supercross. Compound mode is important as it is key to unlocking many extra tracks and custom options.

Track editor rounds out the last of the single player game modes with a handy tutorial to get you started. I’ve never really been huge on track creation on games that weren’t specifically made for it. MES 2’s track editor is well-thought-out and has a countless amount of combinations with its thousands of set pieces. I’m sure the creative bunch will get a lot of hours out of it. Multiplayer is identical to championship mode, with the option of playing other people’s custom-made tracks. I was able to have a few online races at full capacity—it did take some time for that to happen, however.

Dirt, mud, and sand. What else would you expect from a Supercross game? The materials of the Earth do look how they are supposed to with an excellent amount of detail. Lines from the treads of the bikes appear with particles of dirt, mud, and sand kicking up into the camera for that extra authentic feel. The wheels even become coated with whatever you run over. The suits and bikes are close to lifelike, with far more detail put into the models than was needed. The character face models are probably the weakest in the graphical department. I understand that the people themselves are not the focal point of Monster Energy Supercross 2—just don’t give them a creepy thousand-yard stare and have me look at the models during multiple points throughout the game. I could have done without the soul-piercing eyes thank you very much. 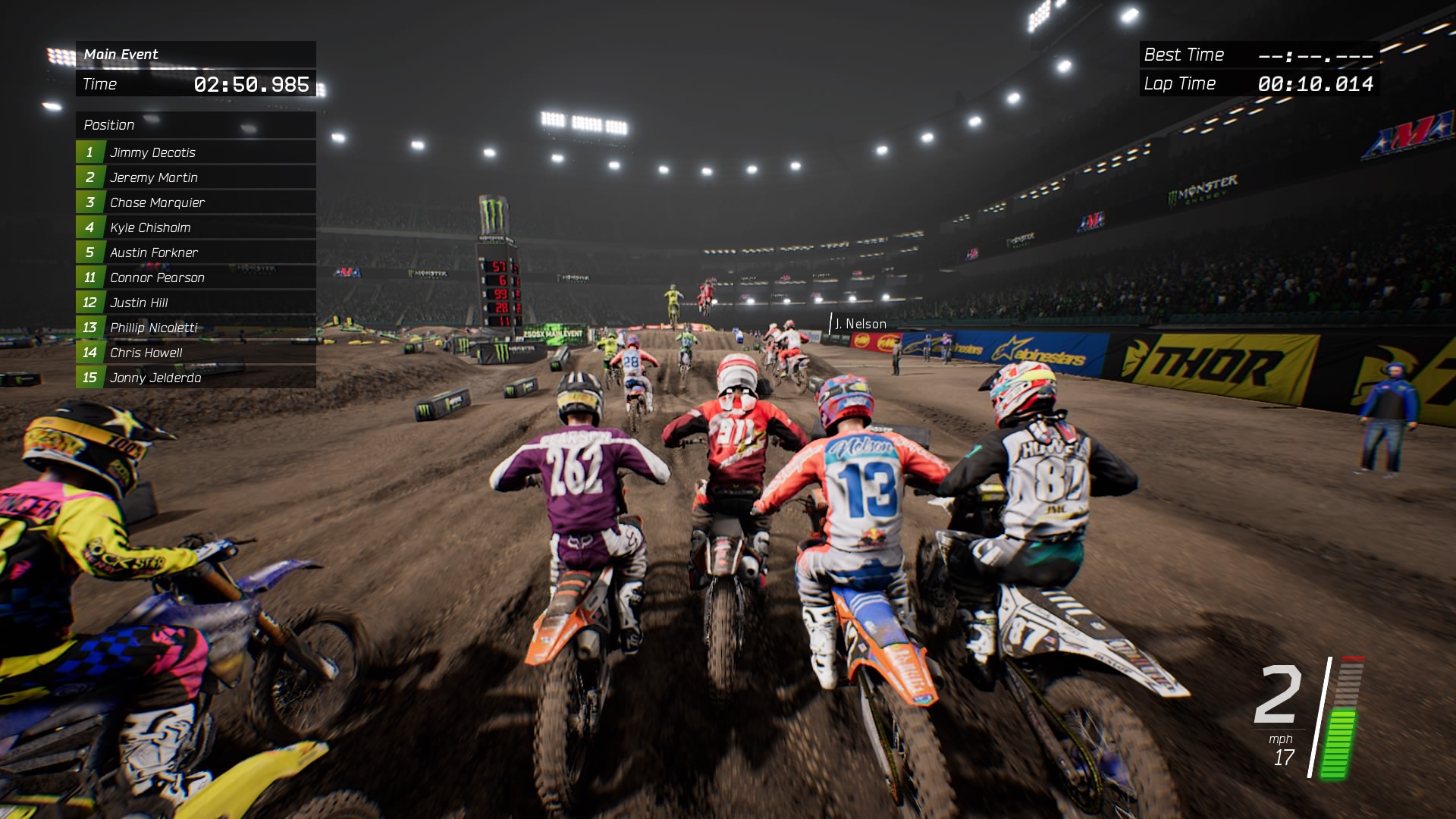 Control is what separates the novices from the elites. Of course, going fast is important in a race, but not as much as making sharp turns, keeping momentum, and minimizing the time in the air. The bikes have a heavy feel to them, as like there is a force always pulling them to the ground. In the beginning, you’ll most likely be making constant mistakes and feeling the frustration build up with each one piling up on top of each other. With enough perseverance, swerving through the tracks will start to feel like second nature. It’ll take some time, but MES 2 starts to feel good to play—that is when you actually are playing the game.

Frequent loading times tend to kill the pacing of the game. Not enough to completely dismiss the product as a whole but they do add up. Some of these loading times average around thirty seconds while few can be upwards to a minute. You may just end up spending as much time in the loading screens as you are playing if you do not have access to a solid state drive. The AI can also be rather strange as I had one race where they just piled in front of a ramp for me to obtain an easy first place. In other instances, they can have such precision with their jumps and turns that it’s downright impossible for any human to attempt. Don’t even attempt to collide with the AI opponents either. It’s like shooting a styrofoam rocket into a brick wall. The physics seem indecisive at times where some collisions into the barriers will either have me become very acquainted with the dirt or simply push right through them.

I sure hope you like country and rock because that is what this soundtrack entirely consists of. It is wholly appropriate, given the nature of this extreme sport and some songs really give off that Tony Hawk’s Pro Skater vibe. It really resonated with me as the Tony Hawk series is one of my all-time favorites. If country and rock isn’t your cup of dirt, then you can turn it off and listen to the revs of the engine, the roaring of the crowd, and the spinning of the wheels instead. I had to verify if these sounds were realistic by watching some Supercross events myself. I can say decisively that they do sound extremely close to the real thing.

Personally, I didn’t see or hear anything morally concerning. (Don’t blame me entirely, I was too busy focusing on not crashing!) The game is rated T for a reason so while looking through ESRB’s website, I found a few things. According to the ESRB, one of the songs mentions the word “sh*t” and a few others mention alcohol and drugs in their lyrics. The first game was rated E, so if lyrics are the only thing to boost the ratings of this sequel, it can’t be all bad, right?

Monster Energy Supercross 2 will appeal to fans and enthusiasts of the sport. It did a good job keeping someone like me entertained for a guy who didn’t care for the genre one bit when first starting out. Will I now consume Supercross like a sweet tooth will consume chocolate? Most likely not. It has enough to appeal to casuals and veterans alike with its simple-to-learn controls and engaging advanced mechanics, although there isn’t much in the form of competition in this niche video game genre. It could use a bit more polish and refining in, well... almost everything, but you know what they say: “third time’s a charm.” If they keep going at the same pace they are right now, Monster Energy Supercross 3 could be the definitive motocross experience.