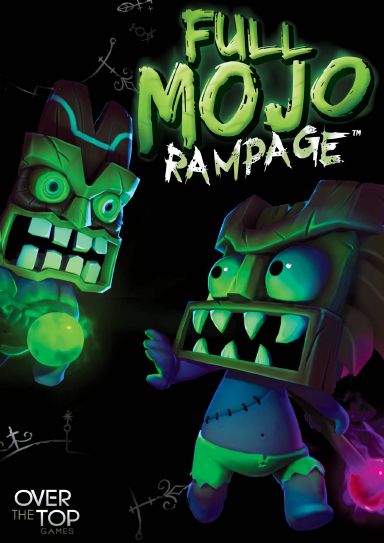 Thank you Over The Top Games for sending us this game to review!

There’s not much of a story in Full Mojo Rampage other than it starting off with your character getting chased in a cemetery and stumbling upon a Voodoo doll (with pins in it) that gives him the power to fight back. Your goal is to complete various objectives while fending away swarms of undead monsters that aim to stop you. Between them and the bosses, you will die, but your experience and medals collected do carry over to your next playthrough. Like other Rogue-like games, each playthough will be different as the maps are generated randomly.

Medals are used to unlock different masks and Loas (Voodoo spirits) with varying powers and abilities. Just like other twin-stick shooter games, one of the joysticks moves around your character while the other fires projectiles from your equipped wand. Depending on which Loa you are using, you’ll have different attacks or abilities mapped to your left and right triggers. These abilities need to recharge until they are able to be used again. 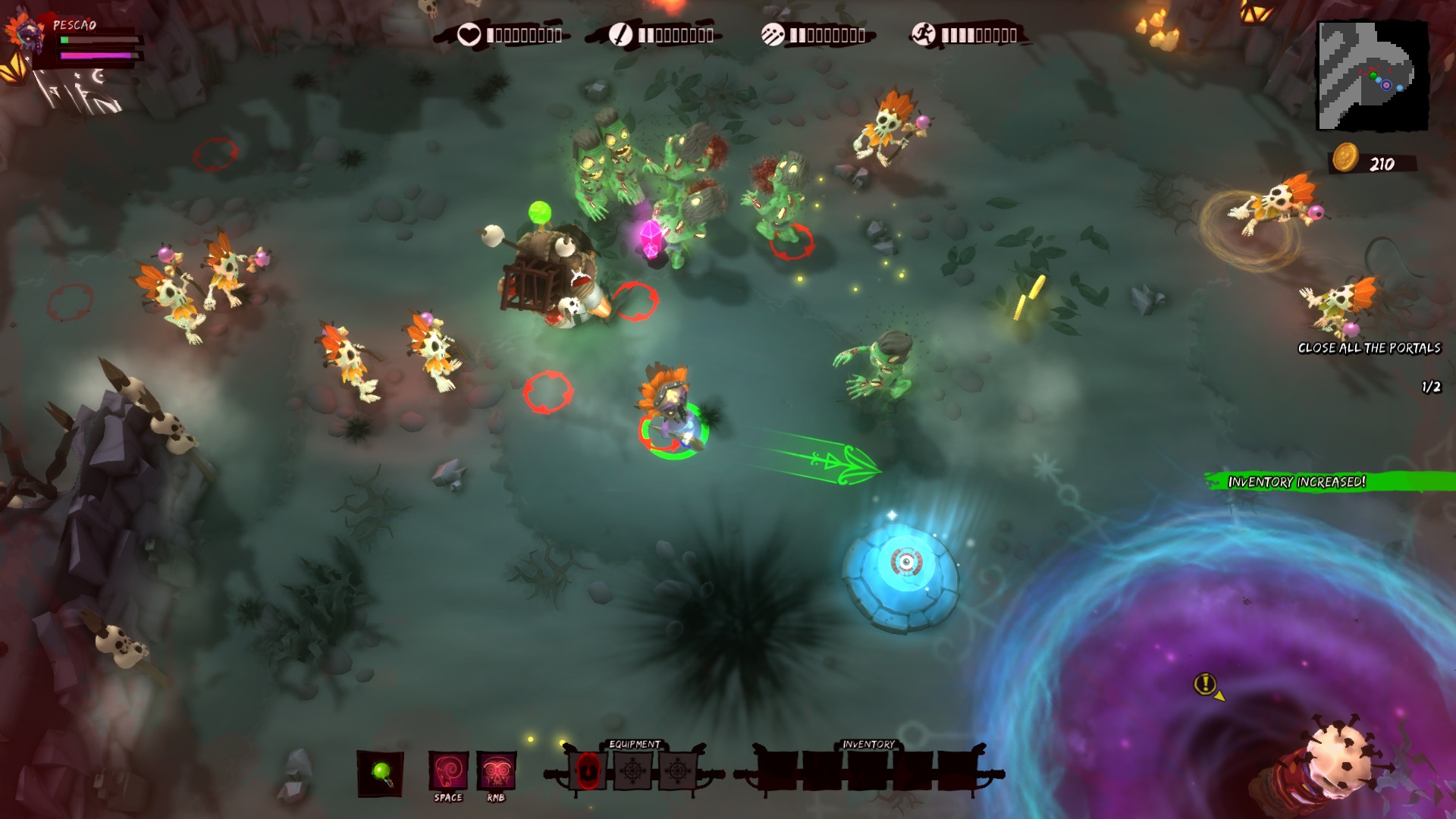 Besides enemies, you’ll find treasure chests, piles of bones, and tombstones that have loot inside if you stop to examine them. Many levels have shrines that let you combine items, which is really handy since you only have a handful of inventory slots. Vendors can also be found and they can sell healing potions and powerful wands. Unfortunately, the wands lose their charge so you’ll have to conserve their power or save them for bosses and rely on your infinite default wand as your primary. Some of the wands are pretty cool with multi-shot beams or grenades.

Passive power-ups are nice to find and equip. Be sure to examine each one and combine them when given an opportunity to do so. Some of the power-ups can increase your speed, attack rate, or even the amount of damage you do. Sadly, the power-ups do not respawn with you if you die. Upon your death, you will be taken back to the beginning of the dungeon where you have to start all over again. If you have leveled up, you can choose which attribute (health, damage, speed, attack rate) to increase at the main menu.

Pins can be collected as items in the game and you have to use them in order to unlock them for future playthroughs.  The pins can boost your stats, gold collection rate, or even give you starting healing potions.  Some of the pins can be upgraded so be sure to max them out if possible. 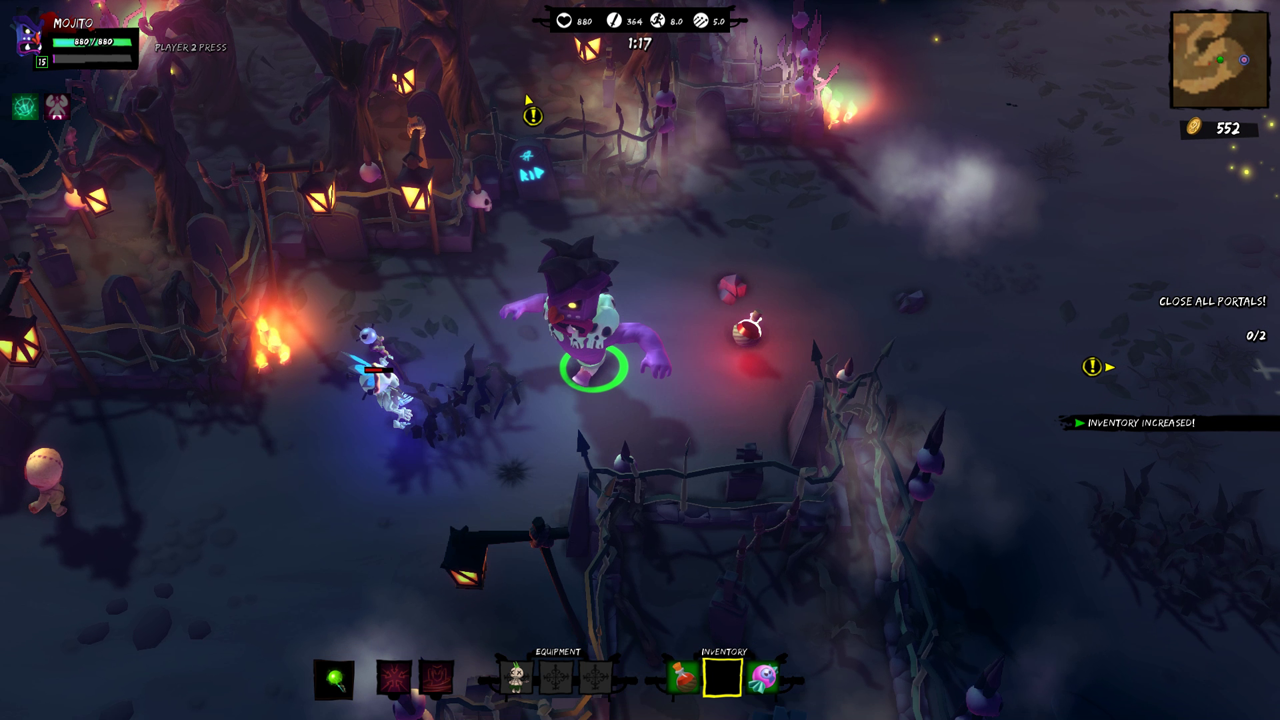 Playing solo is fun and I enjoyed my numerous playthroughs. Once I got the hang of the game and controls I tried to find an online game to join. Sadly, there were not any available. It’s a shame since all of the popular game modes are there: co-op, death match, team death match, and capture the flag. Local co-op play would be a nice alternative, but that’s not available. If you’re looking for a multiplayer experience, you may want to look elsewhere.

Christians should also be wary of this title due to the numerous Voodoo references. Between the Voodoo dolls, pins for them, Loas, and shaman masks, this game is full of Voodoo symbolism. Aside from that, there are many undead monsters, magic, drinking/smoking references as well as language. Full Mojo Rampage definitely earns its Teen rating from the ESRB.

Aside from the moral issues and lack of multiplayer options, Full Mojo Rampage is a well polished and fun game. As long as you don’t expect any multiplayer action it’s worth checking out or picking up on sale.