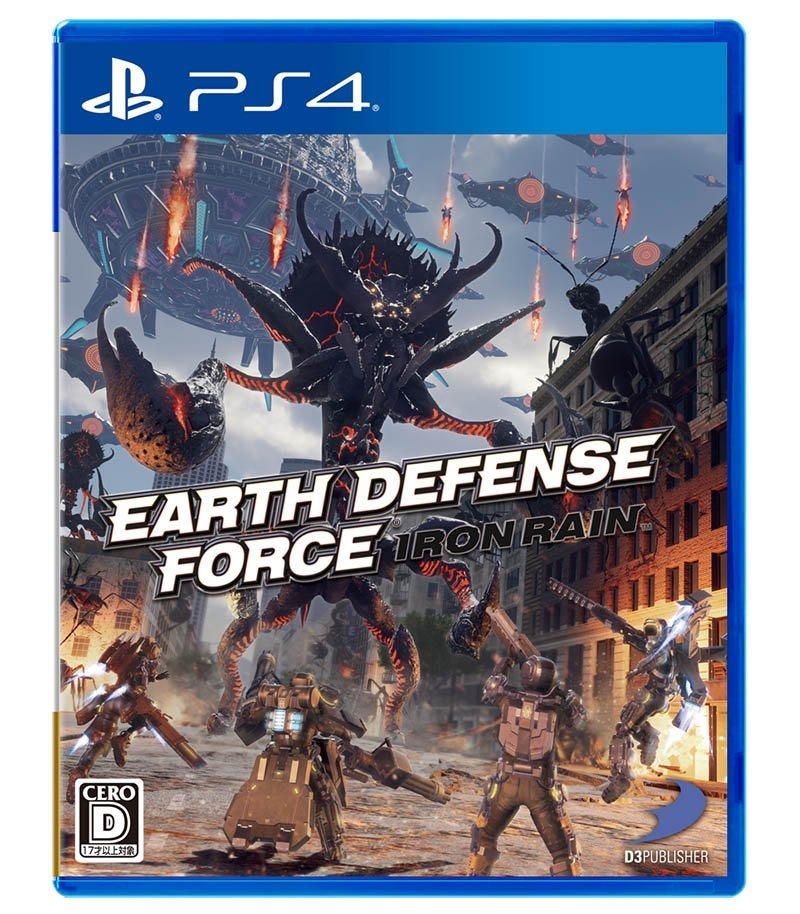 Thank you D3 Publisher for sending us this game to review!

I have found that the Earth Defense Force (EDF) series is one I discovered perhaps far too late, but I am glad I have regardless. There is just something that feels right about blasting away at hundreds of aliens in the form of giant bugs, space ships, huge robots, and so on. The main series is developed by Sandlot, and are masters at bug-ridden mayhem.

For those not in the know, Earth Defense Force is a third-person shooter where you (and potentially, up to one other buddy locally, or five others online) work to save the human race from alien invasion. The invaders take many different forms, including giant insects, flying saucers, and who knows what else, while you blow them to smithereens. You get to do this as one of four different classes each with their own strengths and weaknesses.

Every so often, especially after the huge growth of the series after recent popular entries, the guys at D3 decided that they wanted to see how another team can do with the reigns of this iconic alien-blasting franchise. Sandlot gets control of the mainline entries, like EDF 2, 4(.1), 5, and so on. Iron Rain, like Insect Armageddon before it, is being handled by a different team; in this case, the guys over at Yuke's, currently famous for their varied WWE wrestling games. They took this opportunity very seriously and spent a lot of time trying to make this game just right while also giving their own take on the series. 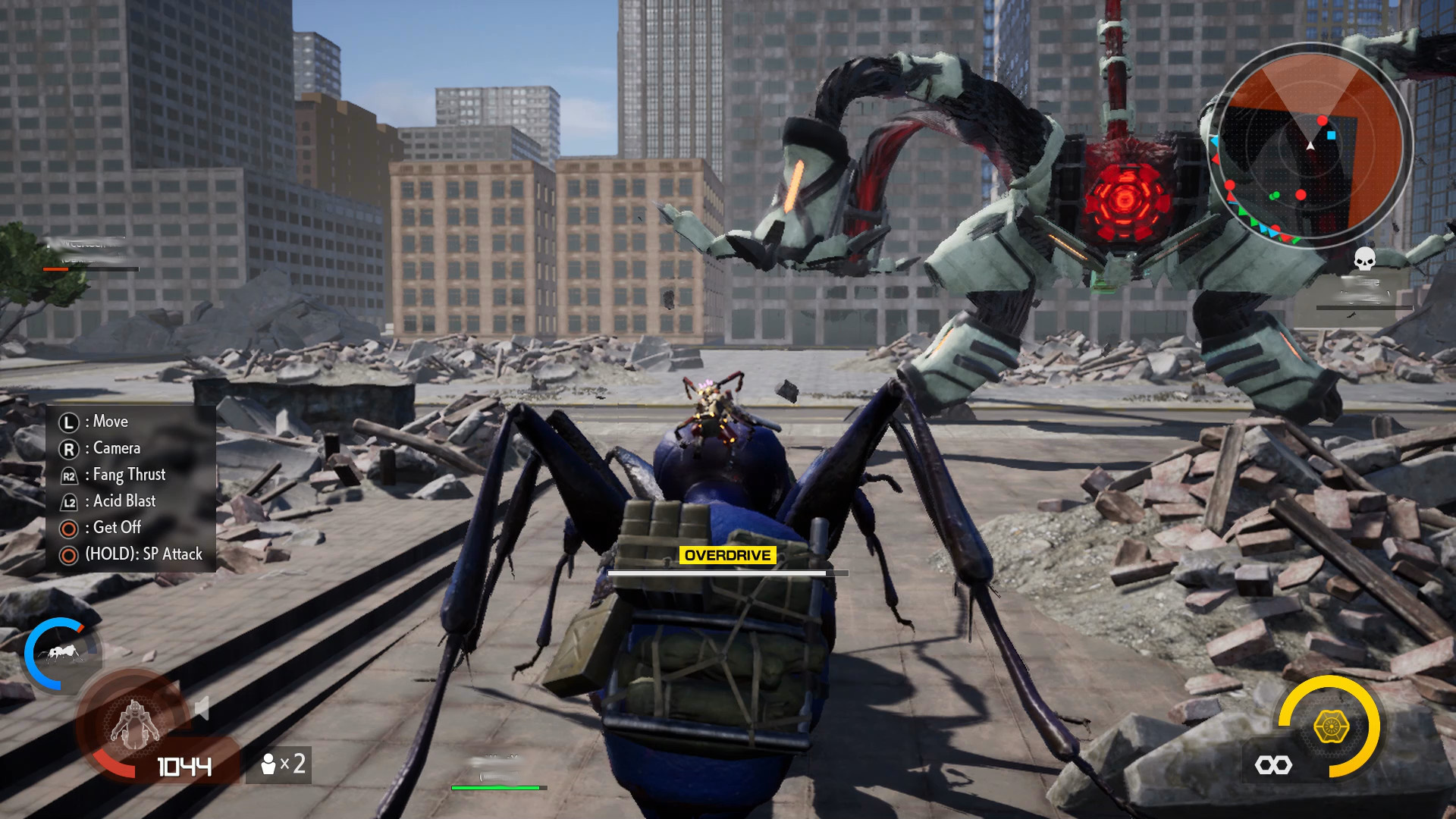 Strong Points: Massive battles with a ridiculous number of opponents; giant insects; fast paced action; giant arachnids; split screen and online multiplayer is a blast; giant monsters; much better graphics than the main EDF games; character customization available; good weapon variety; while somewhat similar to mainline EDF, it’s also different enough to be its own thing; has some interesting innovations of the mainline EDF formula; more storyline and world development than mainline EDF games
Weak Points: Even on PS4 Pro, the resolution appears to be 1080p; feels subtly different and a bit less snappy than mainline EDF; constantly running into play area borders is really annoying; less levels than a mainline EDF (but still a decent amount); game crashed on me during character customization
Moral Warnings: Massive quantities of violence against alien invaders; this one has you actually attacking humans, as there is a rebellion against the EDF you sometimes fight against; words like '*ss', 'd*mn', ‘b*st*rd’, and 'h*ll'; lots of (mostly bug) blood; some suggestive themes, including calling a woman hot

Unlike the very Japanese-focused mainline games, this one takes place in America, and was simultaneously released in Japan and in the West. It is set quite a bit into the future, in 2040. In that span of time, the EDF developed new suits (that somewhat closely resemble the old ones), but rather than being character or sex specific, everyone can use the new PA (Physical Augmentation) Gear. Every player can be customized, and capabilities are not tied to cosmetics. You get to choose your colors, face, sex, hairstyles, and so on.

There are four kinds of PA Gear. The first is the Trooper, which is the standard infantry that closely resembles the Ranger from previous entries. The second is the Jet Lifter, which is a portable jet pack that resembles the formerly female-only Wing Diver. The Heavy Striker is very slow, and is similar to the Fencer, except in my opinion, much better. The Heavy Striker carries two weapons at once... and does crazy damage. The Air Raider's functionality has been folded into every class, since anyone can summon vehicles now. What replaces it is the extremely cool Prowl Rider. You can ride your very own giant insect! If this wasn't enough, you can zoom around town like Spider-Man, or perhaps even more accurately, Attack on Titan's omni-directional mobility gear. It can be a bit clumsy at times, but it's also extremely cool.

Each class has an Energy Core that they use to power their abilities. For most, it's movement related; dashing, flying, rolling, and grappling all cost energy. Once energy has been depleted, you have to wait for it to recharge, and this can put you in quite a dangerous position, since you are usually quite a bit slower while recharging. Once per level you can press in on both analog sticks and activate Overdrive.

Overdrive is very powerful because you have unlimited boost energy while it's active. This is especially useful for the Jet Lifter and Heavy Striker, since they have unlimited flight and shield usage during this time, respectively. But what is really something is what happens to the Prowl Rider - this is when they summon their giant bug to control! You can choose between a giant ant, a giant spider, and a giant scorpion. They all have different roles and are fun to play.

I love how weapons are earned by completing levels rather than semi-randomly. If you beat a level on a specific difficulty, your reward can be a bit more predictably planned for. I also like it how each weapon is shared between all PA Gear. What this means is that if you really like a specific rocket launcher or minigun, then you can take it with you no matter what class you choose. With that said, I found certain weapons, especially those with very slow reload times, to be best suited for the Heavy Striker. Why? Because you have more armor than any other class in the game, so you can take tons of hits. And when you can pound enemies with two of the super slow but powerful chainguns - things die, and fast. I loved that combo!

When comparing it to the other entries, which is nearly impossible to avoid, a couple of things came to mind while playing. The first is rather obvious - the graphics are way, way better. Of course the frame rate still drops a lot when tons are on the screen, but even still, this is, by far, the best-looking game in the series. The other is that it plays subtly slower than EDF 5 (or even 4.1). It's really hard to put your finger on, but the wonky physics that you have gotten used to over the years of playing Sandlot's creations are just different here. I wouldn't say bad different; just different.

I will say that this game uses a lot more 'earth tones' than Sandlot entries. The game overall is less saturated and bright. I assume it was going for a more realistic feel to go with all of that graphical fidelity, and to an extent, it succeeds. It just contributes to the subtle feeling that it just isn't quite the same. Another contributor is that the characters are far more serious. That is not to say that there is no campy silliness going on; there is. But listening to the banter in EDF has always been a source of much laughter while playing; here it's just a tad more serious - not always, but a bit.

With all of that out of the way, is it still fun? Yes, it is. At first, I wasn't sure I would like it; I didn't like how it felt, and battle was just not as engaging, and I found it wicked difficult. (Level 9 anyone?) But once I started to really get a good feel for the new weapons, the new systems, and how the classes worked, I started to enjoy it a lot more. I still prefer the Sandlot entries, but there is definitely fun to be had here as well. The EDF-loving community overall seems to prefer EDF 5, and I would agree, but this is not a bad game by any means. There is plenty of fun bug-smashing to be had here. 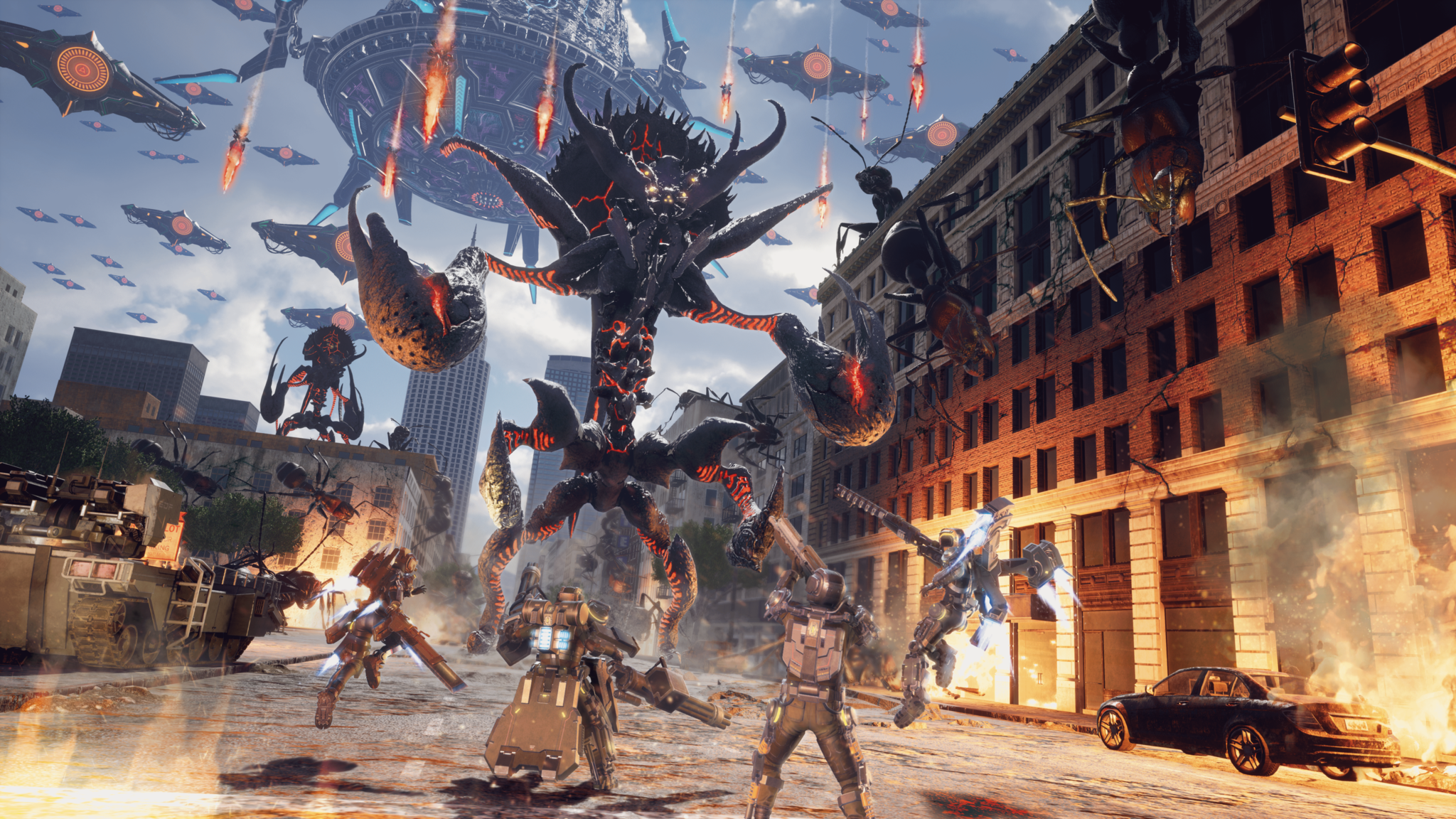 Technically, the game runs pretty well on PS4 Pro, but I was surprised to see that it clearly is not running at a 4K resolution. It may be 1080p, or something in between, but it's not 4K. Nevertheless, the frame rates are great, which is far more important in a game like this. I will say, though, that I have been absolutely spoiled by the PC versions of EDF; while no announcement has been made about Iron Rain coming to PC, there is a very good chance it will happen with the success of their previous entries on PC.

I found the appropriateness to be somewhat predictable, with lots and lots of violence against alien invaders.  In what I believe is a first for the series, you sometimes do actually shoot at other humans, as you have to deal with the human rebellion, which is new to the series.  I do find the idea that other factions may not like the way that the EDF is dealing with the alien invasion interesting.  The voices will sometimes say things less appropriate, including words like '*ss', 'd*mn', ‘b*st*rd’, and 'h*ll'.  There is enemy blood, but mostly in the form of various colored splashes.  If it wasn't obvious, there is plenty of violence, especially weaponized (guns, cannons, etc.) as you blow the baddies to bits.  (Buildings, that presumably other humans live in, are usually collateral damage.  This doesn't seem to concern anyone.)  Female soldiers can choose to have large breasts (there are selectable body types) and wear a tight upper body uniform.  I noticed some references to a 'hot' woman, but I am unsure if there are other suggestive moments, as the game is quite busy most of the time.

Earth Defense Force: Iron Rain is a very good spinoff to the Earth Defense Force series, and a good alternate take.  It doesn't have quite as much content as Sandlot's entries, and I also didn't appreciate being told to stay in the combat zone, as that was something I almost never ran into in a normal EDF game, so at least some game levels must be quite a bit smaller.  If you are looking for your first EDF experience, I would recommend 4.1 or 5.  But if you are looking for something along the same lines but with a different twist, I don't think you can go wrong with Iron Rain.  It's a very solid (if not spectacular) entry into one of gaming's more silly pursuits - killing bugs, and lots of them.  If the appropriateness issues don't invade your comfort zone, then I recommend taking a good look at Earth Defense Force: Iron Rain.