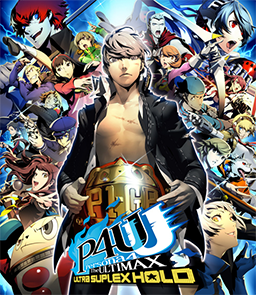 Special thanks to Atlus for sending us this game to review!

When the name Shin Megami Tensei is mentioned, two responses usually crop up: “Oh, I love those games! But they're so long...” or “Huh?”. For those of you in the latter category, some background might be needed. The rest of you can jump ahead.

This all comes back to a game called Digital Devil Story: Megami Tensei, which was released for the Family Computer (the Japanese name for the NES). This game provided a first-person dungeon crawling experience, and involved a then-unique feature whereupon you could negotiate with the monsters you fought. Later, the Super Famicom (the SNES) got a much better game set in the same universe: Shin Megami Tensei. In these games, you played as “Devil Summoners”, who would call upon demons (though in this sense, demon means any supernatural creature) to fight for them. Eventually, a spin-off series was released for North American audiences that captured most of the mechanics of the games, but were easier to grasp for western audiences. The first of these games was Revelations: Persona.

Persona games were a bit different. Instead of playing Devil Summoners, you played as Teenagers who could call upon a Persona, a facet of their personality. Whereas in most Megami Tensei games you could summon any number of creatures, in the Persona games you were often limited to a few Personas per character. This spin-off series has been widely successful, spawning sequels such as Persona 3 and Persona 4, both of which received much critical praise. 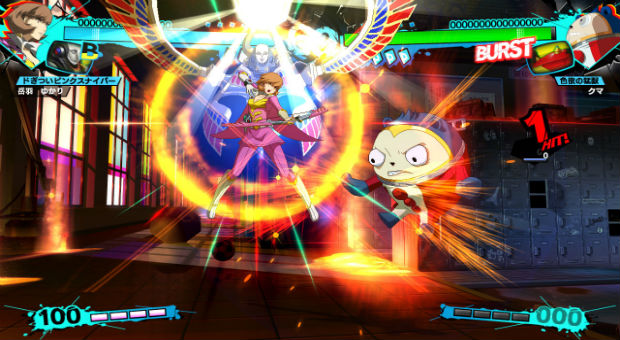 Ultimax in many ways is to P4A as Super Street Fighter IV is to Street Fighter IV. The balance has been improved. New characters were added. Additional stages are present. But it's also more than that. Persona 4 Arena wasn't just a fighting game, you see. It's story was conveyed through a reasonably popular genre in Japan which hasn't seen much widespread exposure over here in the states: The visual novel. The story mode for both P4A and Ultimax is equal parts reading and listening, with fighting every so often to bring some interaction to the experience. In this sense, Ultimax really is a sequel to P4A. A few days after the end of P4A, Ultimax's story picks up.

So what about this story? Here's the short version: In both Persona 3 and 4, there are these enemies known as Shadows. In Persona 4, there is a place inside every television called the TV World, where shadows roam randomly-generated dungeons, and you must fight them. This game also includes characters from Persona 3, and even has a special “episode” of the story mode devoted to the Persona 3 characters. This is a nice touch for people who enjoyed that game. It should be said that in order to see the “True” ending, one must beat both the main episode and the Persona 3 episode.

The game gives you a decent recap of the events at first, but it does end up seriously spoiling the stories for both Persona 3 and 4 later on. It also spoils some of the story of P4A. In short, if you have any interest in playing the other Persona games, play them before this one. It was quite disappointing to have the stories spoiled for me.

But enough about story, let's discuss the gameplay! Persona 4 Arena Ultimax is a fighting game that, like other Arc System Works games, relies more on precision than on speed. A fighting stick is highly recommended if you want to become really good at this game. Using the gamepad makes the game quite frustrating to play, and even with a fighting stick, the learning curve is quite steep. Unlike most fighting games, instead of generic attacks, the game has both physical and Persona attacks. Your physical attacks act like any other fighting game you can think of. Persona attacks are what really differentiate the series though. Persona attacks involve using the character's Persona to make a heavier attack. However, the opponent can attack the Persona, which will cause the character to lose a blue card situated below their health bar. Once all the cards are gone, the character can not use their Persona for a brief period of time.

Like any good fighting game, there also special attacks and combos. Special attacks use energy from the “SP Gauge” at the bottom of the screen. SP can be refilled by almost anything: attacking, blocking, and getting hit all grant you SP. In addition, when your health is low, you can enter into an Awakened mode where your SP refills and you gain defense. There is also a special attack called Burst where you can send a small shockwave from you, but also enters you into Awakened state when you activate it at low health. If you still don't understand, there is a very comprehensive tutorial available that I would highly recommend to anyone who wants to play this game. 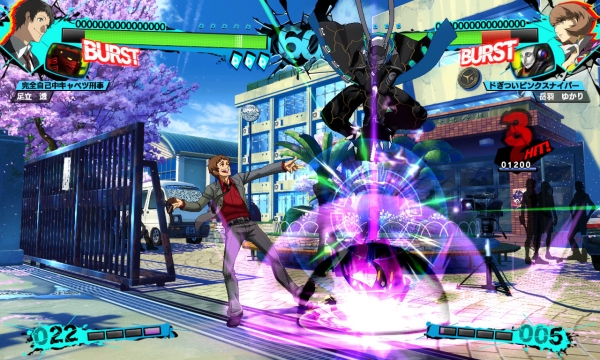 New to Ultimax is a Shadow Type to many of the games characters. These require more skill than the normal characters, as they deal less damage, but have more health. They also carry their SP over multiple rounds instead of having it reset at the beginning of the next round like normal. Finally, they have a Shadow Rampage ability instead of Burst, which gives them unlimited SP for a while.

Like most fighting games, Ultimax has Story, Arcade, Network, and Versus modes. Story is, as explained earlier, a visual novel with fights every so often. Arcade mode starts when you pick a character and difficulty, and go through 8 fights with them. Network mode is exactly what it sounds like: fight people online. Finally, there is Versus mode. As you can probably guess, this is where you can go head-to-head with computer or human opponents.

But there is also a Score Attack mode and a Golden Arena mode. Score Attack is a special kind of strange: You essentially must go 3 rounds with each character in the cast. And the difficulty is one step up from the difficulty set in the menu. It's kind of difficult. Golden Arena mode is new to Ultimax. In this mode, you go through a series of fights (a dungeon), and level up your fighter and their skills. In addition, you chose a supporting character and can level up them as well (through a mechanic called Social Links, but that's a topic for a Persona RPG). The supporting character can perform actions such as healing you, and are generally really nice to have.

From an auditory and visual perspective, Persona 4 Arena Ultimax is fantastic. In typical Atlus fashion, the game has anime-style aesthetics, both in fully-animated cutscenes and in the actual game. The soundtrack is composed by Atsuchi Kitajoh and Shoji Meguro, the latter of whom composed the soundtracks for both Persona 3 and 4. From the get-go, the soundtrack grabs you and sucks you into the game, not unlike the TV world in Persona 4. I've always enjoyed the energetic soundtrack from the Persona games, and this one is no exception. 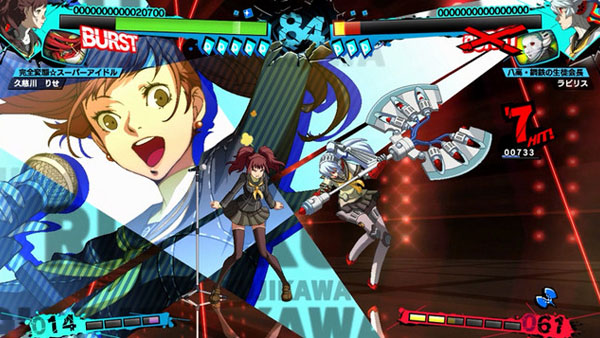 While the game itself is quite stable, load times are almost objectionably long. The game takes up to 15 seconds to load from starting the game to the opening cutscene. Once the game has loaded, it's very snappy though. Another minor point of contention is the sometimes quirky networking. It sometimes lags a bit, and there's the occasional dropped connection. These are infrequent enough to not cause worry for normal play.

There are a few things some people might object to. Each character has a nickname, of sorts. Some of them are pretty amusing: Yu Narukami, who cares for his young cousin Nanako, is nicknamed “The Sister Complex Kingpin of Steel”. Some are a little more indicative of the character's personality, for instance, Teddie: “The Beast in Heat”. He frequently makes advances (usually for kisses, but sometimes hugs) and is frequently rebuffed by the female cast members. He often makes banter with Yosuke Hanamura (“Captain Ressentiment”), including how much they would like to see certain female characters in skimpy bathing suits. There is some language in the game, with the strongest being the S-word (I only heard it once), as well the occasional use of “d*mn it”, “a*s”, “b*tch”, and “crap”. Other than the occasional poking fun at each at other, not too much to worry about here.

The Shin Megami Tensei games are known for being filled with religious iconography, and this game isn't much of an exception. Each Persona is assigned a “Tarot” card, but that doesn't affect the gameplay as much as it would in Persona 3 or 4. At one point in the story, several characters are bound to steel crosses. These crosses somehow prevent them from using their Personas, and you do end up rescuing them throughout the story. The crosses themselves also feature in the background of some stages.

This is a fighting game, so naturally there is violence involved. The violence is bloodless, and no killing occurs. Blood does show up in some of the environments though. In the main game, the female characters are reasonably-clothed, but in some of the story sequences, we see them in skimpy bathing suits. In one sequence, Yosuke and Teddie fantasize briefly about the female characters in two-piece bathing suits after Teddie tries to explain a mistake he made. It's very brief, and subsequently blown off in favor of returning the original conversation, but it is there. Though the ESRB rating mentions Tobacco Use, it exists in the form of General Teddie having a cigar in his mouth.

While this is a very well made fighting game and has a great story, I cannot fully recommend it unless you have already played Persona 4, and preferably Persona 3 and Persona 4 Arena as well. If you are only looking for a good fighting game, then this game will fit the bill nicely. But unless you've played Persona games before, the story mode and motifs will be nigh incomprehensible, even with the summary the game gives you. If you like the Persona games and like fighting you will enjoy this game. If you like fighting games and don't much mind an unusual story and setting, there's a lot to enjoy here.