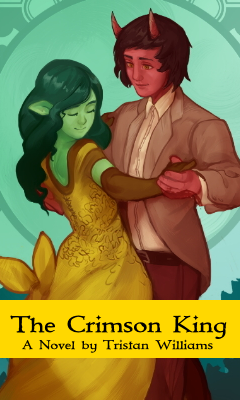 Thank you, Tristan Williams, for submitting a copy of this book to the site for review!

*Advertising disclosure* - Before this review was posted, Tristan Williams became an advertising partner. This review is not influenced by this relationship.

The Crimson King is the first book in a series titled the Butterfly Chronicles, written by Tristan Williams. This is the first book by the author from Louisiana, and was inspired in part by the tabletop games that he plays.

The majority of the novel focuses on a young man named Oslo Orlov, who has a devilish appearance and starts the novel trying to hide from his criminal past. He is soon joined by Anna, a green-skinned sylph-like creature who works as a bounty hunter and also is one of his oldest and most trusted friends. They travel together to explore his future and his role in a prophesy presented by the deity of fate, Othren, also known as the Great Butterfly. Along the way, they meet up with other people who also are trying to learn their place in the world, as run by a king driven insane by the loss of his sons.

The novel progresses at a rapid pace, and alternates between the present and flashes of Oslo's past behavior as a bandit, as well as the leader of a vicious tribe of bandits. The dialogue is solid and many of the characters well-developed. The book reads quite well, and serves as quite the page-turner, with enough action and drama to prevent the book from getting dull. The narrative focuses a lot on Oslo's depression and eventual desire to atone for his past and try to make the world better. The setting is very well-done, too, and made me want to learn more of the world these characters find themselves in.

The book is a great read, but it does have a few flaws. There are a smattering of grammatical errors, but not glaring mistakes. And while some of the characters are well-developed, others come off as a bit shallow. For example, even though the character of Anne starts out interesting enough, she quickly pales into a somewhat static, predictable sort. Speaking of predictable, some of the scenes and actions of the characters can easily be anticipated well before they occur.

From a moral perspective, the book has a few things to consider. As is typical for a fantasy novel, there is a theology that consists of a pantheon of deities. However, aside from the Great Butterfly, none of the other gods even seem to make a difference, let alone appear. There are a few instances of the word b****rd, but they are used in the proper context in the book. The biggest moral concern I found was the gratuitous, sometimes gruesome violence. Although I have certainly read worse, this aspect alone would give me pause before suggesting it to my younger kids. However, these are the only things I've seen that may be potential issues to Christian readers, so many will find this book to be quite entertaining.

When it comes to reading the works of independent authors, sometimes it can really be hit-or-miss to find a quality one – and sadly, the results tend to be a miss. It's easy to see why many of these authors don't get published by a larger house. However, Tristan Williams' book is a pleasant deviation from the usual dreck of self-published titles. The Crimson King is an entertaining read from start to finish, and promises to be a great introduction to what could be a quite memorable series. Authors tend to improve as they refine their craft, and with the way Williams starts here, he may turn into an author to watch closely.