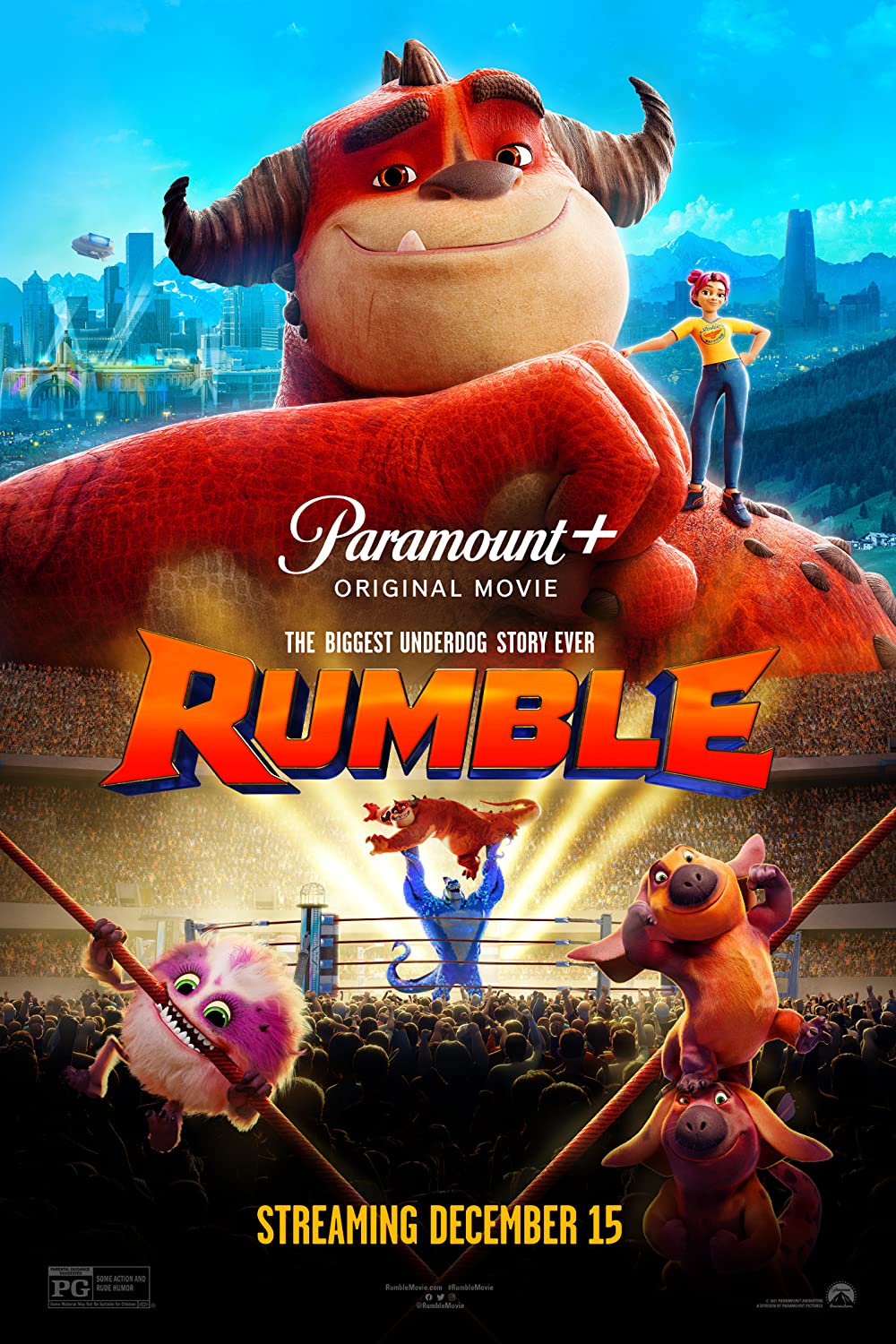 Thank you Paramount for sending us a screener of Rumble to review!

Most stories start with a “what if?” scenario. Some famous examples include “what if toys had feelings and lives that nobody could ever see?” or “what if a robot was sent back in time to murder the mother of an influential enemy leader before he was born?” When someone inevitably decided to take fantasy’s most gruesome residents and the most physical televised sport and put them together, they (namely Paramount) created Rumble: a movie whose premise is based wholly on monsters wrestling. (For those of you invested in the cast, there are a few names in there you’re bound to recognize.)

The film follows a young adult by the name of Winnie, who lives in a small town known for its monster wrestling. The town, named Stoker, is famous because of a coach-monster duo that are considered the greatest of all time. However, this duo was lost at sea several years before the story begins – leaving Winnie without a father. When the monster champion that replaced that duo decides to leave town for bigger and better things, Stoker is in a conundrum: monster wrestling is their biggest source of income. Since the town no longer has a use for the stadium, they plan to tear it down. It’s up to Winnie to find a champion for the town that will replace the one that left them before it’s too late to save the stadium.

I won’t go into too much detail on the plot (to avoid spoilers), but I will say that there are a lot of parallels and thematic elements in the story that I immensely enjoyed. The plot is stereotypical, but the characters make the movie and bring it to life. Their interactions are hilarious, and they don’t feel like comedy. They just feel real. There’s a certain sense of uniqueness with the dialogue that isn’t really represented in a lot of other movies I’ve seen. There are a couple of very minor plot inconsistencies, but it’s a kids movie. Paramount probably put those in because of its target audience.

The animation is beautiful. The characters are aesthetically pleasing, the movement is smooth, and the backgrounds are well designed. The voice acting is fantastic, and the music choice is on point. I applaud whoever made the musical choices in this film. They are awesome.

There are some issues that some of the more pious may want to watch out for, though. There is a good chunk of gross humor present in this movie. There’s some potty humor, there’s some spit jokes, and there’s some butt humor too. There’s also a reference to getting kicked in the privates. There’s also a character who at one point runs around in his underwear. This same character is constantly getting his tattoos replaced throughout the duration of the movie. Other than that, this movie is very safe.

Overall, I loved this movie. I didn’t know what I was getting into, but I ended up liking it a lot more than I expected to. It’s a very charming film, and for those who don’t mind a little gross humor, I would definitely recommend Rumble for you and your family.

What are CS:GO Skin Stickers and Why are They so I...
5 Technological Advancements in Embedded Solutions...