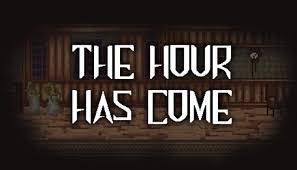 Thanks to Obadiah D Luna for sending us a review copy!

I always do a quick bit of research when writing up reviews, and googling for “The Hour Has Come” returns verses related to Jesus’ crucifixion. It seems strangely appropriate to me that a psychological horror game should call to mind the fear of the scattered disciples as the Messiah was taken from them. This appears to be Obadiah D Luna’s first serious attempt at developing a game, and it’s quite a commendable effort in that context.

The game sees you waking up in a haunted house with a simple objective: find seven keys to unlock the front door and escape. There isn’t much to do per se as you fumble about in the darkness. You can walk, run, or interact with the environment. The main interactions are using doors and stairs, but there are also a few items around the house that can be picked up. Besides the seven keys, there are also two notes to unlock a door, and a strange tablet that can help greatly if you can figure out what the purple light is for. Picking up objects can be a bit frustrating though because a lot of times you’ll have to fumble around a bit to find just the right spot to pick it up. More annoying though is that the keys all spawn one at a time after the previous one is used, and that they can spawn in rooms you’ve already searched. I can understand that this uncertainty is meant to feed into the sense of paranoia, but it just feels like it’s padding out what would otherwise be a 15 minute game with an extra 15 minutes of tedium. 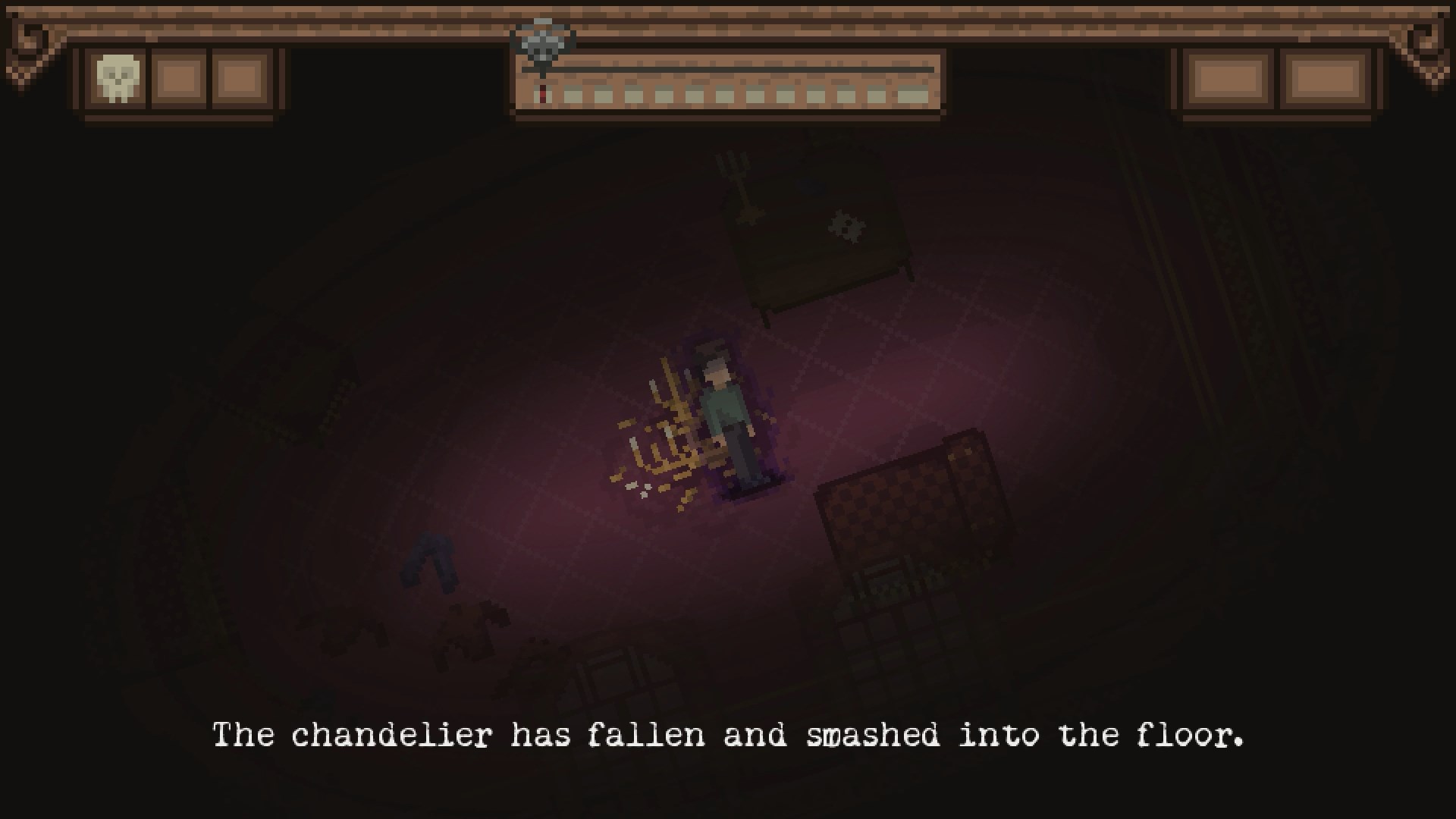 Creepy dolls, stalking spirits, body horror abominations, and cosmic horrors are among the cast of monsters that stalk your footsteps. There’s no fighting back here, there’s only running for the door or figuring out how to not get caught. In most cases you’ll be warned of their presence and given a moment to react, but the margins can be frustratingly tight even for a horror game. Each time you’re caught, you’ll be cursed. Get cursed four times and you’ll be stuck in the house forever. Curse effects are varied, although for a few of them such as screen flips and rotations it does feel like the developer was just showing off what they could do with GameMaker.

Furthering the frustrations of having too little reaction time, a few of the monsters also don’t have any telegraphing appropriate to the threat they pose. This is especially notable in the theatre, where they can spawn between you and the one way out of the room when you are too deep in to back out, and there is no way to react appropriately before they go straight for you. The visual noise of books strewn about the floors and foreground windows can also camouflage approaching monsters, adding to the frustration of what would have been an otherwise fair failure. Two of the curses that can be inflicted are a little… unique. They are well and truly terrifying and you will feel the blood drain from your face the first time they happen, but they do so for all the wrong reasons. 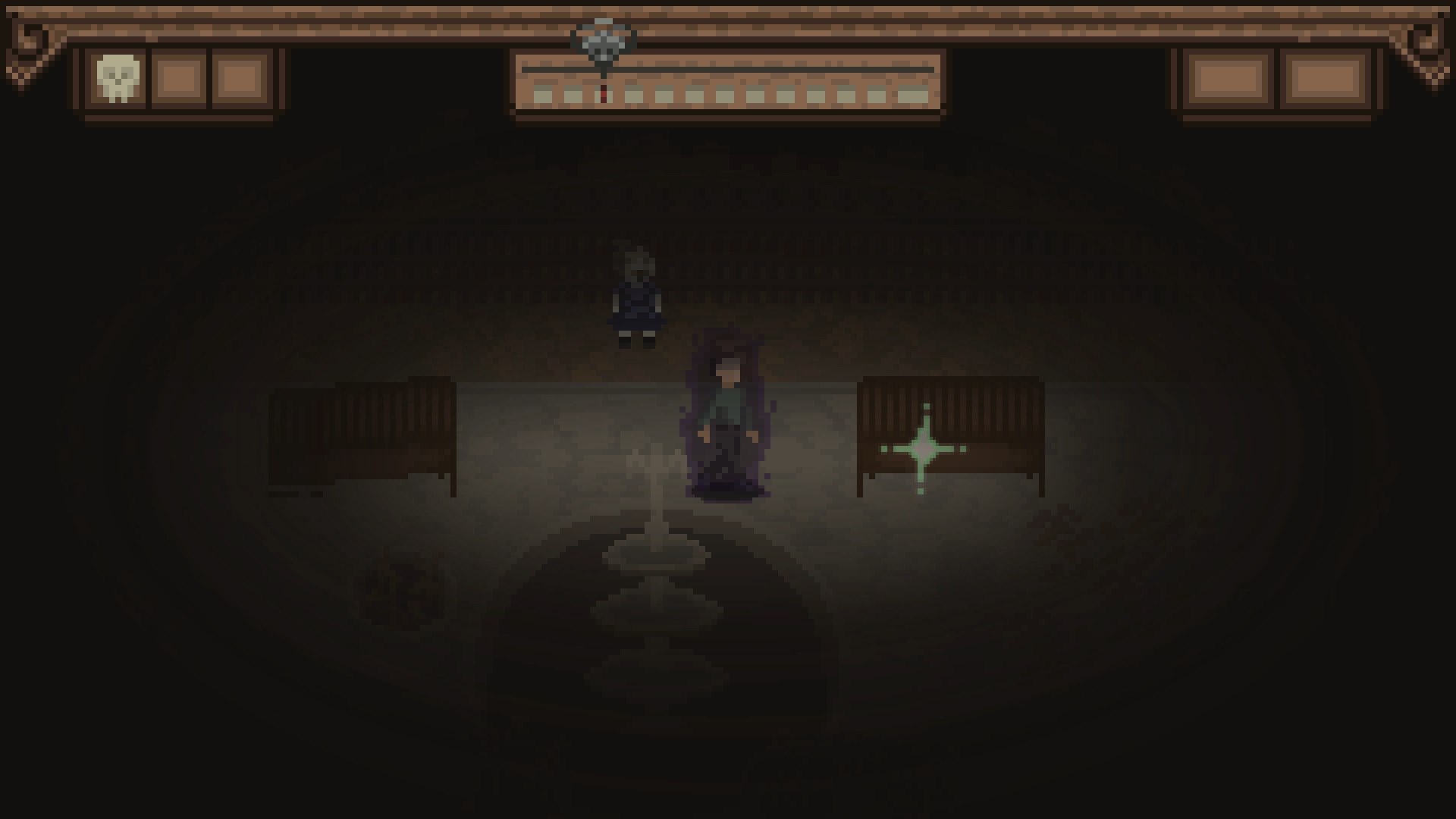 With that said, the art and sound is generally well done. The dull and pale pixel art saps all joy, and the monsters are suitably terrifying in their appearance without being overdesigned. The droning monotony of the soundtrack isn’t anything particularly new, but it fills the atmosphere with a dour dread, and it feels very much like you’ve been locked in with a horror movie monster, or an Euclid-level threat from the SCP Foundation Archives. The Hour Has Come effectively builds up the latent tension over its duration, and the payoff compares favorably to the Five Nights At Freddy's games, leaving behind strained strings to sell the various curses as they are inflicted upon you.

To the moral side of things, the game is actually devoid of violence. There is no slashing or mutilation of the player; the screen simply fades to black for a moment when the player is caught. There are a few environmental blood puddles though, and one of the monster designs does show off its internal organs sticking out through rotted skin. Should you be cursed enough times, you do see your face lose its features in a moment of body horror. The occult is naturally quite heavy in this game, in the same fashion that you’d see in horror movies.

The Hour Has Come is a short and simple horror game. It’s mediocre, but first attempts usually are. If you crave the feeling of helplessness and fear, the $5 price tag is cheaper than a movie ticket, will last you at least as long in failed attempts, and is at least as scary. Don’t let the kids play this one though, or they’ll be having nightmares.