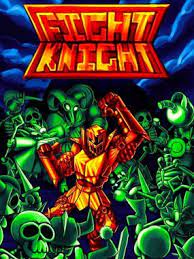 Thank you Team Sorcerobe for providing us with a review code!

I have more or less followed Fight Knight for almost all of its development cycle. A “first-person beat ‘em up” caught my attention made by a small team that had a dream. Five years of work have paid off, as Team Sorerobe has finally released Fight Knight.

Being some parts action and some parts dungeon crawler—that would technically make it a dungeon brawler (I wish I came up with that). Fight Knight stars the eponymous armored being who sets off on a journey to scale The Tower, a massive six-floor building that plants itself onto the land, forcing all the inhabitants to suffer an eternal night. Now our knight is a bit different than others. As many would use some sort of sword and shield to combat, the Fight Knight relies on his fist to pummel everything in his path. He even uses his fist to communicate. I mean it in a literal sense, not in that hot-blooded anime kind of way. Strangely enough, most of the people don’t seem to mind being assaulted when conversating with the punchy paladin.

All of Fight Knight is controlled on a grid, like any classic dungeon crawler. In the overworld, Fight Knight will either go through the multiple floors of The Tower or navigate through the hub area, where he will communicate with the various allies that he assisted while scaling up the tower. Some of these allies will take residence in the once empty buildings, assisting you in various ways such as a “fast travel” option via a cannon, or a potion shop to store away potions. When Fight Knight is in the tower, he’ll navigate through each floor, solving various fist-based puzzles. Solving puzzles will open paths that tend to loop back to the starting area, giving you time to go back to your rest area to save any progress gained. Keep in mind that this is a true blue dungeon crawler, there are no checkpoints, and saving is done in the hub area. If you happen to lose, you won’t restart from a checkpoint, you will restart from your last save. Make sure to save often. Strangely enough, Fight Knight has no quicksave feature unlike many entries in the dungeon crawler genre. 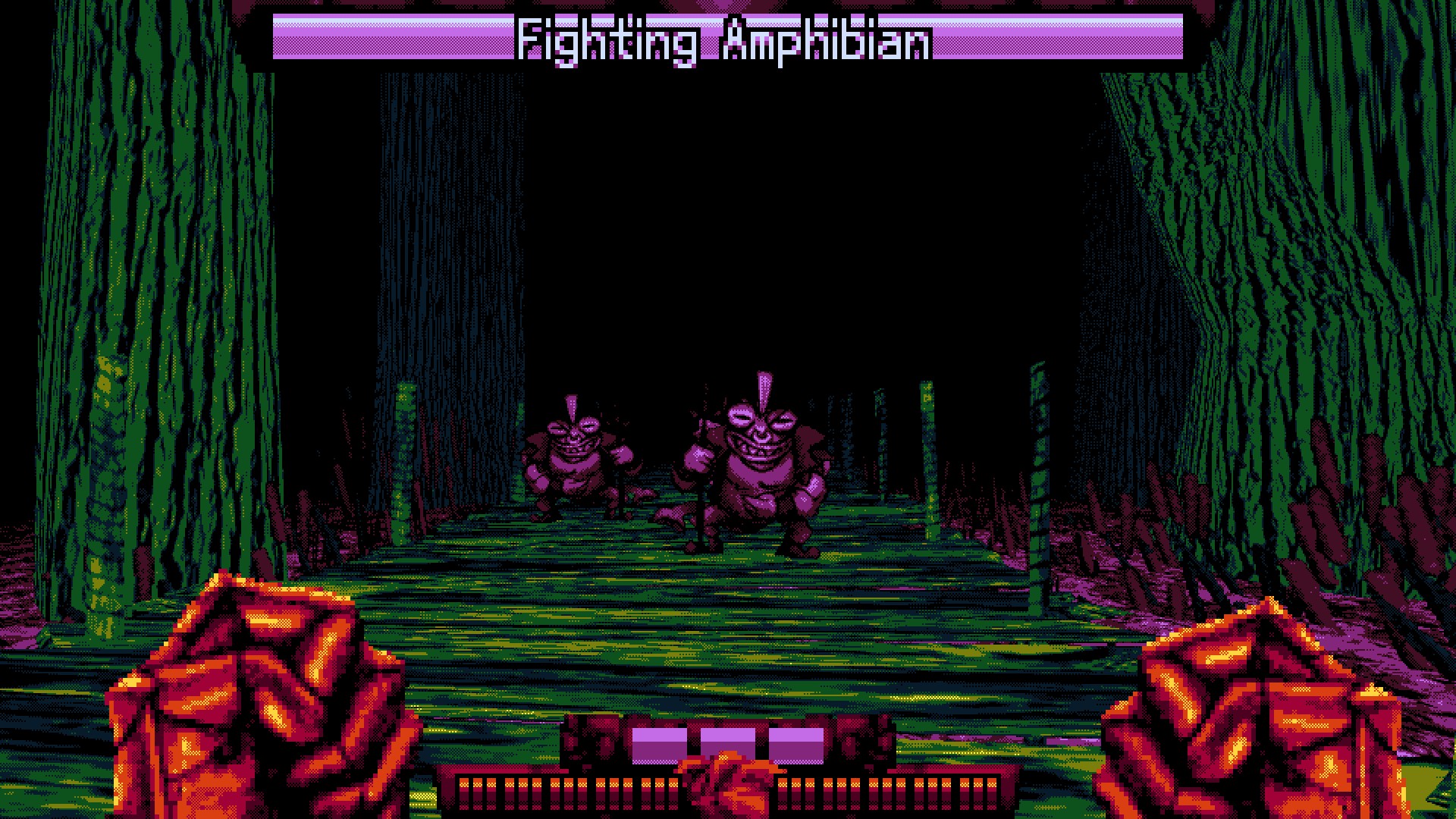 Strong Points: A simple and engaging combat system; great boss fights; charming aesthetic
Weak Points: Dungeon crawling mechanics make some moments tedious; no quicksave feature
Moral Warnings: Nearly every enemy is some sort of supernatural creature; one usage of the word “h*lluva”;  magic usage/sorcery; fantasy violence; the Leather Manhandler armor has you “flip the bird” as one of its attacks; Gothic armor seemingly draws upon occult power; possible polytheistic setting as some characters use phrases such as "by the gods"

After some time on The Tower’s floors, random encounters (or placement-triggered encounters) will happen, and where Fight Knight’s combat comes into play. On what I would probably describe as a 2x2 field, exists the Fight Knight and numerous enemies. Fight Knight can move infinitely backward but can only move forward until he is faced to face with an enemy. Combat is very simple with attacking, blocking, and automatic punching on separate buttons. The fourth button is to choose between one to three special moves that have a quick-time event or button prompt tied to successful execution. Choosing the special moves is a little awkward at first as it requires holding the direction in place, and then selecting it with the button. Fighting is easy to get a grasp on and starts simple, but ramps up in complexity as our glorious gladiator goes up each floor. Combining movement with your attack button will have the Fight Knight execute certain moves such as back+attack for an uppercut, side+attack for a left/right hook, and forward+attack for an overhead strike. All of these have their uses in battle and some enemies are either weak or require these combos to be hit. Blocking at the right time will execute a parry. Parries not only nullify damage, but they can reflect some projectiles too.

Combat shines when there are lots of enemies to fight or in the boss battles. The combinations of enemies are well-thought with plenty of them covering each other’s weaknesses. In some cases, those frail wizards that lob slow-moving projectiles are easy alone but can become a nightmare when they have a close-range skeleton knight preventing you from reaching the wizards in the back, forcing you to deal with the skeletons first. Boss battles are when the combat of Fight Knight reaches its apex as it feels like an exhilarating combination of Nintendo’s Punch Out!!, with Capcom’s Megaman Battle Network/Starforce and God Hand. Although some moves of some bosses do lean towards nearly impossible to dodge/parry on reaction, every boss in the game will keep any player on their toes as it’s non-stop action and reaction. After every fight, loot is dropped that can be used to unlock new armors, skills, and potions back at the hub. Armors in particular change the way Fight Knight… fights. The armor you’ll most likely unlock first is one based on a gunslinger/desperado where his health is cut in half, but has faster punches and movement, with the ability to backstep two panels in combat.

Now the style of Fight Knight is pretty weird, as uses 2D portraits for characters, with 3D polygons for the environment, but that isn’t the weirdest part. Almost everything in the game is one primary color, with some shading effects. The Fight Knight is a gold-red color and the first floor of The Tower is only a purple and a blue. The way the characters are designed is a retro cartoon aesthetic with sharp edges and exaggerated features. The style lets the characters be very expressive in their movements and manages to grow on you quickly. Even the usage of one solid color I found to be quite charming. 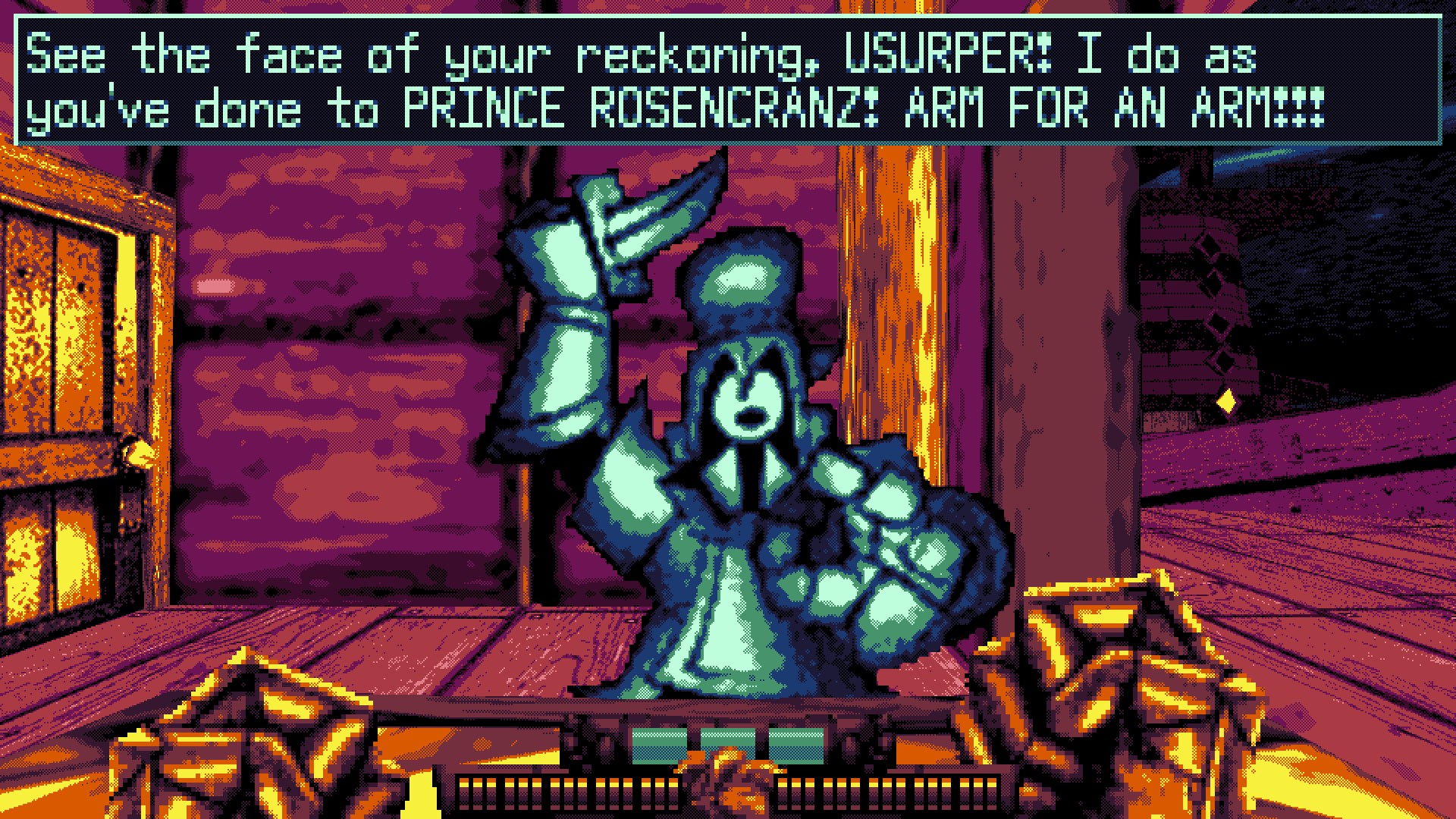 As with the art, the music is also retro-inspired. Many of the tunes sound like they could come right from a Sega Genesis/Mega Drive or a Super Nintendo. My favorite theme is the central hub theme as it has an interesting mix of melancholy and relaxation. Your hub area is meant to be relaxing as it represents a safe haven, but the looming threat of The Tower also brings forth sadness. The sound effects are nice and punchy with clear tells for enemy attacks such as glowing a bright red or gold color. The NPCs, whenever dialogue is present, have a gibberish mumble similar to games like Banjo-Kazooie and Animal Crossing. It’s cute and works for Fight Knight as every character is some sort of otherworldly being. There is, however, one sound effect from the second boss in the game that ignores all conventions and is extremely loud and distorted. It’s confirmed to be fixed in a future update, but this basically serves as a headphone warning for that particular fight.

I do generally enjoy the combat and easily find it to be the best feature, but Fight Knight isn’t without its flaws. Before the defense potion is unlocked that has an ability to repel encounters, they can get pretty tedious when you’re just trying to collect the rest of the stuff or save/assist any NPCs you missed out on. Frankly, I’ve never been too crazy about the dungeon crawler genre in the first place so that’s more of a personal complaint than a flaw I guess. The puzzles themselves can also lean on the weaker side. It is to be given when most puzzles are tile/movement based as Fight Knight doesn’t have an inventory to use in the overworld or anything of the sort. They either range from so simple that you even question why they exist in the first place, or needlessly frustrating. And with a game that has great combat, I found it weird that there is no boss rush mode or even a survival/horde mode.

In regards to moral warnings, arguably the most noticeable one is the supernatural elements. Every enemy in the game is some sort of bipedal lizard, amphibian, skeleton, mummy, and so forth. Even the main antagonist can’t exactly be explained in regards to the setting. A lot of the enemies use generic fairytale magic like balls of energy or resurrection. Fight Knight's world is possibly polytheistic as some NPCs say phrases like "by the gods." Dialogue is mostly clean. The only thing I noticed was one usage of the word “h*lluva.” Of course, there is the violence aspect. No blood or gore is present, but you’ll be punching enemies a lot. One of the optional armors "the Leather Manhandler" is all about defiance, and thus one of its attacks have the Knight flip the bird towards his enemies. The Gothic armor is probably the closest thing to an occult weapon. It doesn't seem to call upon any real-life religions as far as my knowledge goes, but it does have an ability to absorb the life force of enemies.

So after five or so years of development, what has Team Sorcerobe accomplished with Fight Knight? Although I feel that the dungeon crawling aspects held it back a bit and didn’t exactly enhance the experience, everything surrounding the combat more than makes up for it. Punching the daylights out of everything is just so satisfying and the boss battles are the true highlight. If you’re very experienced in action and dungeon crawling games, I’d say an expert could probably beat the game within seven to nine hours, whereas everyone else (like me) would take eleven to fifteen. A new game+ feature is unlocked that changes up the encounters and bosses—giving you a chance to use those late game armors and skills as well as acting as a pseudo-hard mode. The moral warnings mostly account for the supernatural so take that as you will. With great combat, charming visuals/characters, and a surprisingly decent story, Fight Knight is an easy purchase for any action and dungeon crawling lover.