Thank you TrueBlue for sending us this TrueBlue Mini pack (available from flashcarda.com) to review!

After the smashing successes of the NES Classic and SNES Classic from Nintendo, Sony decided to try their hand at reviving their original console for modern audiences also. So the PlayStation Classic arrived: 20 games, tiny box, two high-quality controllers, all for $99. Except that the game selection had people scratching their heads.

Sony, in many ways, threw the collection together, seemingly without considering everything. For example, several of the games use the PAL 50Hz version, rather than the NTSC 60Hz version. This matters, because in the 50Hz versions, the game itself runs at 5/6 speed - and you can totally tell. One of the worst offenders is Tekken 3, which runs noticeably slow out of the box on PlayStation Classic (which I will sometimes call the PS Classic). Other issues include the strange selection of games, which excludes what are seemingly critical games in the PlayStation's (also called PS1) vast collection, while including others that were critically panned, or simply did not age well. (Not that the PS1's game catalogue isn't vast and fantastic, and narrowing down a list to 20 is a tall order, for sure.)

Also like the NES and SNES Classic consoles, the PlayStation Classic has also attracted the attention of enterprising hackers. Like the aforementioned Nintendo systems, this Classic console was very quickly hacked wide open, and there are several excellent hacking tools to add your own games, or even emulators for other systems if you so desire. 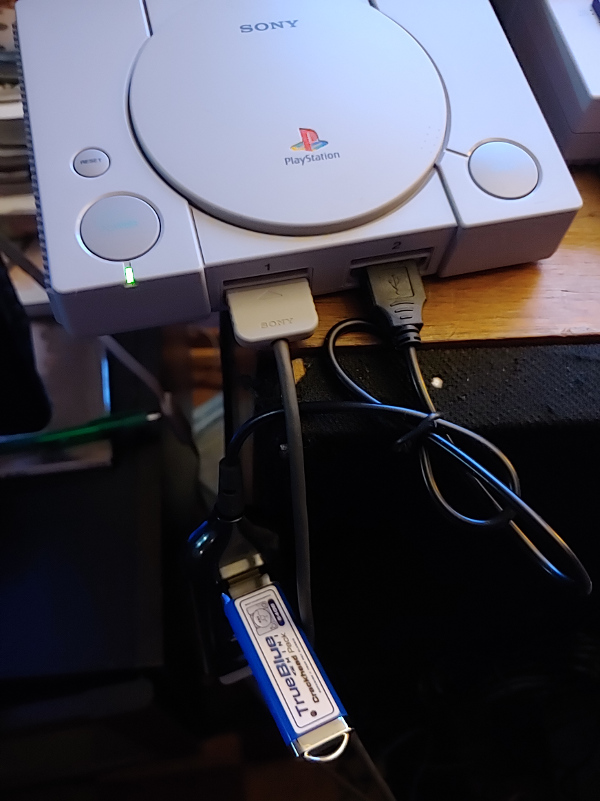 As great as these things are, it is time to point out the obvious: most of these tools can easily be used to steal copyrighted software, otherwise known as piracy. I personally only put games on any hacked device that I own - if I have a digital or physical license in another format, I will sometimes 'format shift' that game to another device, often through hacking or emulation. I enjoy hacking just for the sake of seeing what I can do with something, often via the hard work of others. However, that is not quite what TrueBlue is offering here.

What this USB stick is about, is most certainly the easiest way to add games to the PlayStation Classic. I can't imagine a way to make it any easier. You make sure the PS Classic is powered off, then you plug in the included USB hub and USB drive into the hub, and plug in controller two there as well if you wish (that's why the hub is included). I instinctively plugged them into the second controller USB port, though it turns out that may have been necessary for it to work.

Once you turn on the PS Classic, it may take a bit longer than it would without the USB drive attached, and I found that sometimes it may even automatically launch a game you didn't tell it to. Once you exit out of the surprise game, you have in front of you a horizontal list of over one hundred games (101, to be exact). The interface looks exactly like the stock twenty game list, just with lots more. It works pretty much just like you would expect it to - all of the games support saves, save states, and so on, just like on the stock PS Classic games list. Speaking of which, the default list of games are not accessible while running with the TrueBlue Mini attached. Fortunately, it's a quick reboot and plug/unplug to switch between the games on the TrueBlue Mini, and the stock list.

The list of games is quite extensive, so rather than listing them all out here, it might be easier to just link to TrueBlue's homepage. You can see their game list here. 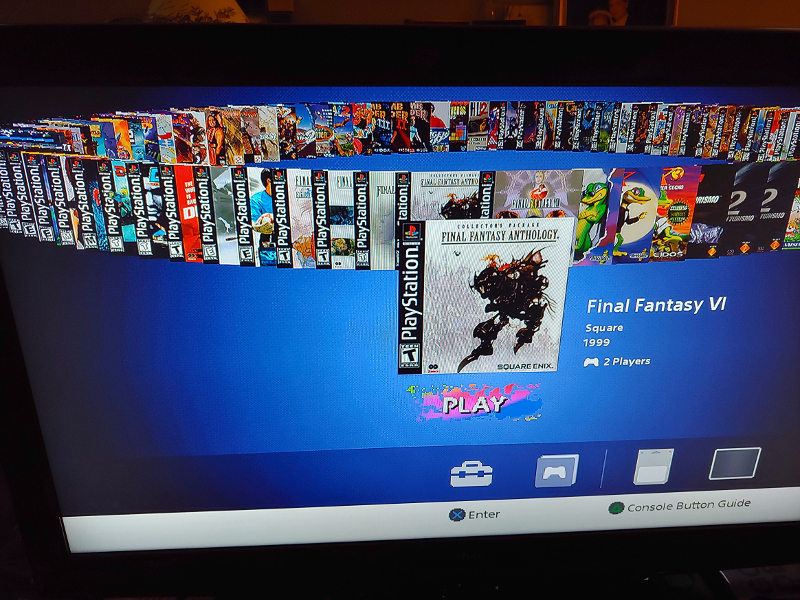 Speaking of the stock games, a few of them on the Crackhead Pack are duplicates of variants of the versions included out of the box. For example, the stock version of Resident Evil is the director's cut; this device includes the original version. Tekken 3, which runs so poorly out of the box, is included in its NTSC 60Hz glory in this collection. Strangely, Syphon Filter is also included here, which appears to be exactly the same as the game included in the stock firmware.

As an aside, I noticed that the stick is formatted ext4, which should be familiar to any Linux lovers out there. So, if you have a Linux computer available, it should be fairly easy to figure out how the stick works, and perhaps even try to add a few more games. I did not want to experiment with what we were asked to review, but there is a small amount of unformatted space left on the USB drive, so it may be possible to expand the storage to the full amount and add a small number of additional games.

The selection already included on the Crackhead Pack is truly excellent. They also offer other packs, including the Meth Pack and Fight Pack, with is a smaller (32GB) collection of wonderful fighting games. The PS1 had a truly staggering selection of fighting games on it, so it's nice to see one of the official collections including them. This one, the Crackhead Pack, has everything from racing to platformers (more 3D than 2D), lots of fighting, and a great selection of RPGs. While there is always room for more, I am quite pleased with the games offered here. Twenty games taken from this list would likely offer a more well-rounded selection than what Sony provided out of the box on the PS Classic.

Unfortunately, it has to be said again, that it is extremely unlikely that you will own all one-hundred and one games in this collection in some other format. I have more games than most, and I own a good 20% of what is listed. But it's still unlikely for anyone to have them all. So, what does this mean? You can't get around it - this device enables piracy, there are no two ways about it. Maybe pirating 20+ year old games doesn't matter to you, but that's the moral and legal risks you take when purchasing a device like this.

If adding new games to your PlayStation Classic is of utmost priority to you, and sailing the high seas isn't a big problem, then it's easy to recommend this piracy stick. On top of the Crackhead Pack reviewed here, there is also a 64GB Meth Pack with another list of 101 games, and a 32GB Fight Pack that has an excellent selection of fighting games on it. The prices are also excellent, with the two 64GB collections at $19.95 each, and the 32GB pack is $17.45. The TrueBlue Mini Crackhead Pack 64GB (and, presumably, the other packs as well) is a high-quality, incredibly easy to use product for adding more games to the PS Classic with possibly the easiest installation method possible - just plug it in.