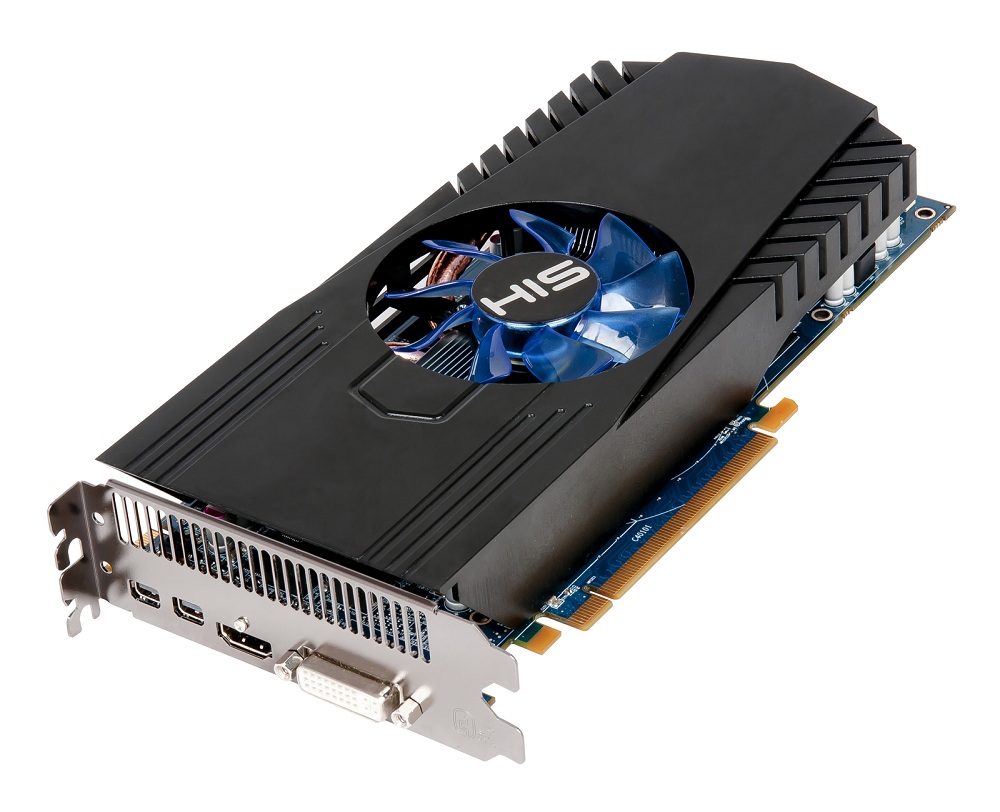 HIS HD 5870 x2 in a CrossFire configuration

We ran the benchmarks using a 64 bit version of Windows 7 Professional. Windows gave the 7870 a 7.9 rating in desktop and gaming graphics. With the exception of 3DMark 11, most of these benchmarks were ran at 1920x1200 wide screen resolution. The NVIDIA driver used was 285.62 and most of the ATI cards used a beta 12.1 driver provided by HIS. Because the 7870 is a newer card, we had to use the latest 12.3 Catalyst driver.

Before HIS sent us these video cards for review, we owned 2x HIS HD 5870s, both in different PCs. We took this opportunity to benchmark them in a CrossFire configuration. This configuration is close to the cost of one 7870, if you don't mind buying used, so I thought it might be interesting to see how well it does.

These results were obtained using the performance test at the default resolution of 1280x720. The HD 7870 (pink) owns all of these cards except for the CrossFire configuration, and has a 1,000 point lead on the 7850. 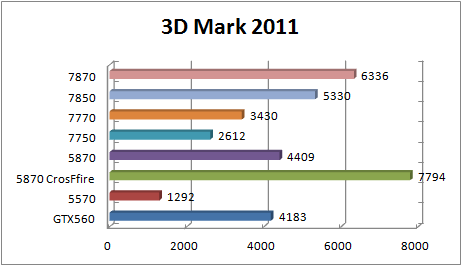 Unigine’s Heaven Benchmark was the first to incorporate Direct X 11. The HD 7870’s new processing design beats a single HD 5870 handily thanks to vastly improved tessellation performance, while also beating the 7850. While the 5870 CrossFire configuration does post a higher average frame rate than the 7870, this is because the maximum FPS is much higher. The CrossFire scaling also seems to be over 200%, which doesn't make sense as two cards should never be more than 100% faster than one. Watching it run suggests that something may be fishy with this. There are times when the frame rate speeds up unnaturally, while the 7870 does not have this anomaly. The 7870 has a much more consistent frame rate watching it, and is overall more enjoyable to watch as a result. 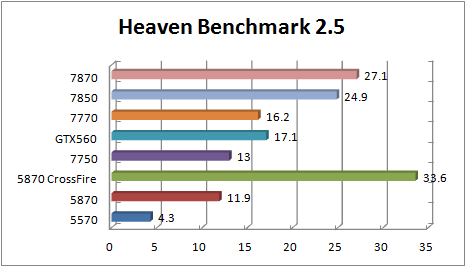 Cinebench is a great tool for testing Open GL performance. The HD 7000 series are the only models that feature OpenGL 4.2 support. In this test it has the highest score so far, but it's so close to the others that it's basically worthless. It appears to be CPU bound. 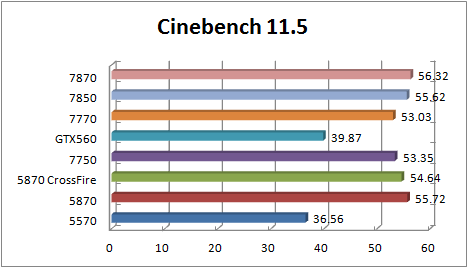 Battlefield 3 will bring any powerful system down to its knees. We had the graphics maxed and recorded the temperatures and frames per second using a beta version of MSI’s afterburner software. All of the video cards struggled here. The HD 7870 ran great with an average of 43FPS, which is by far the best value so far, and was a joy to play. The factory overclocked 560 gets pretty close. Reading the graph below may suggest that the 5870 CrossFire ran this game the best, but that is far from the case. While it had the best maximum frame rates, CrossFire introduces a very strange inconsistency that makes the game almost unplayable. For a short time it will run very smooth, and then a moment later it runs very poorly at what seems to be less than 10FPS, and then it speeds up again. I do not recommend playing this game on CrossFire unless you are very patient with AMD's bugfixes. This game is known to use more than 1GB of RAM at the highest settings, so that could definitely contribute to the poor performance. The HD 7870’s load temperature in BF3 was 69 degrees. The 5870s in CrossFire were a similar temperature, at 72 and 69 degrees each. 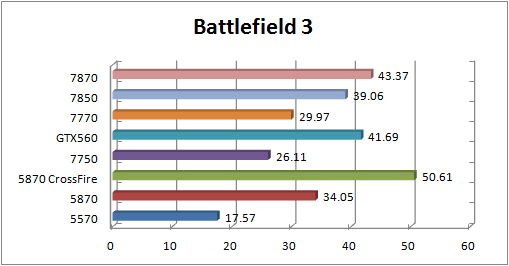 Skyrim is a popular game that offers enhanced textures to make video cards work even harder. The 7870 averages close to 48FPS and is playable with the graphics set to Ultra. The temperature stayed at 55 degrees. The 5870 CrossFire configuration earned a very slightly better 2FPS better. I think these cards are CPU bound at this point, and all play it well. 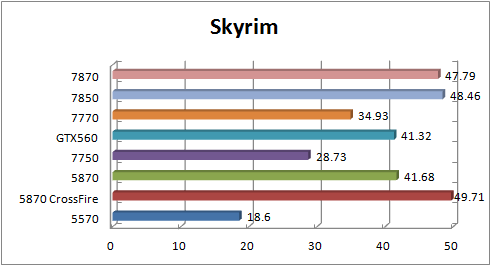 Frame rate wise, the CrossFire configuration really shines here, with 98FPS. This game has by far the best CrossFire scaling of all of the games we tested. The 7870 puts up a very solid showing at 64.28FPS, beating out all other single card competitors in this comparison. Honestly, while CrossFire looks great, it has extra stutters and tearing that don't show up as an actual drop in frame rate that doesn't exist on the 7870. This is one of many reasons why I haven't continued to pursue multi-GPU setups for several years since my 8800GT SLI setup. 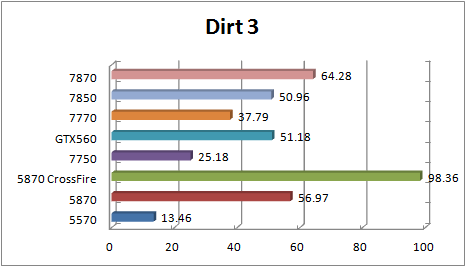 The infamous Crytek engine still punishes video cards to this day. Most of these cards struggled. This benchmark was run under the Very High setting which is not recommended for most of these cards. This is another strong showing for CrossFire at 45FPS, and playing it confirmed that. However, the 7870 really isn't very far behind at 38FPS, and really shows up the other single cards by a considerable margin. 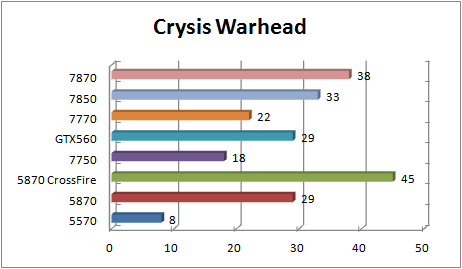 Street Fighter IV has a unique cell shaded, comic book style look to it. Most of the cards did well and the HD 7870 rules all but the CrossFire setup with 180FPS. The moves go by so fast in benchmark mode that you can hardly see what is happening. Almost all of these cards are perfectly playable in this game. 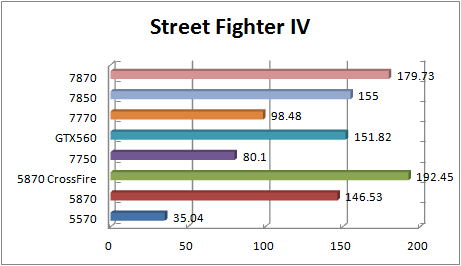 This was the first time in a long while that I got to sit down with a Multi-GPU setup, and the first time I had CrossFire on my system for any length of time. While it definitely improves frame rates, and is often exactly what is needed depending on the game, in this case it was thoroughly hit or miss. While it was fun to see such fantastically high frame rate numbers, this setup was much more susceptible to minor frame rate variations and barely perceptible stuttering. The way our brains work, often times dramatic variations in frame rate can be more noticeable than the max FPS outright. Also, certain games like BF3 are nearly unplayable with CrossFire enabled. Having more video RAM on the 7870 was also noticeable at times, as the game would load in the middle of a level or other situation on the 5870s.

The HIS HD 7870 is a very nice gaming card that will satisfy many gamers. It can hold its own on resource intensive games such as Crysis, Skyrim, and Battlefield 3. Its strength lies in its new architecture, with its improved processing power and multimedia features. The improved processing power was really evident in the Heaven benchmark with its heavy tessellation. I was very impressed that it did better than the power hungry 5870 CrossFire configuration, despite lower maximum or average frames. The 7870 requires two power connections, just like my 5870's. I'm officially retiring my HIS 1GB HD5870 2x in CrossFire and moving on to this HIS 2GB HD7870. More consistent frame rates and lower power utilization really seal the deal for me. The HDMI 1.4a feature that this card supports includes not only 4k video output, but stereoscopic 3D. It even supports up to six displays! With a price tag of around $350, this is a fairly high end card at a pretty high end price. Nevertheless, it's probably one of the best cards at this price point.