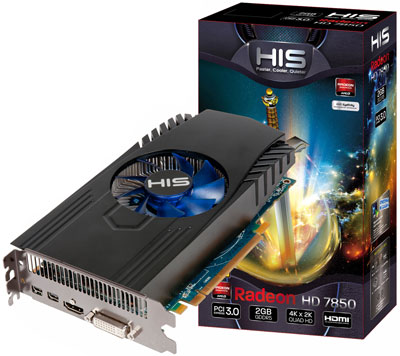 We ran the benchmarks using a 64 bit version of Windows 7 Professional. Windows gave the 7850 a 7.9 rating in desktop and gaming graphics. With the exception of 3DMark 11, most of these benchmarks were ran at 1920x1200 wide screen resolution. The NVIDIA driver used was 285.62 and most of the ATI cards used a beta 12.1 driver provided by HIS.  Because the 7850 is a newer card, we had to use the latest 12.3 Catalyst driver. 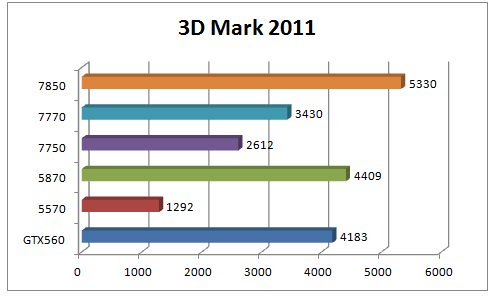 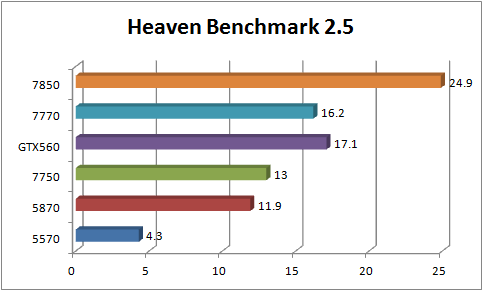 Cinebench is a great tool for testing Open GL performance. The HD 7000 series are the only models that feature OpenGL 4.2 support. In this test it slightly trails the 5870 by a fraction of a frame per second; they basically tied. 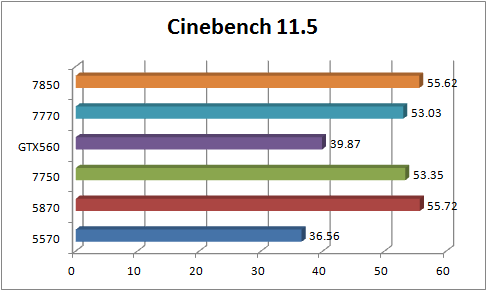 Battlefield 3 will bring any powerful system down to its knees. We had the graphics maxed and recorded the temperatures and frames per second using a beta version of MSI’s afterburner software. All of the video cards struggled here. The HD 7850 ran great with an average of 39FPS. The factory overclocked 560 retains it's lead here.  The 5570’s performance was horrible and unplayable. The HD 7850’s idle temperature was 31 degrees Celsius and BF3 brought it up to 54 degrees. 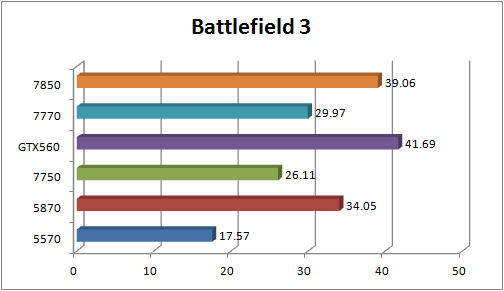 Skyrim is a popular game that offers enhanced textures to make video cards work even harder. The 7850 averages close to 49FPS and is playable with the graphics set to Ultra. The temperature stayed at a reasonable 47 degrees. If you own a 5570, do yourself a favor and stick with Morrowind. 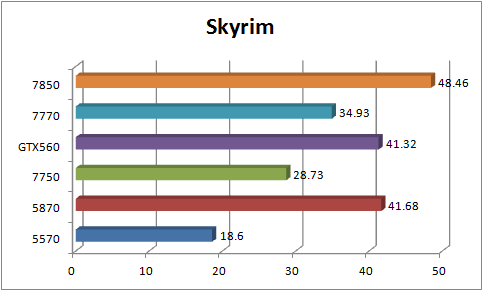 Dirt 2 was one of the first games to support Direct X 11 and we love games that offer built in benchmarks. Dirt 3 does not disappoint; the benchmark shows more snow than dirt making it pretty to watch. The HD 7850 does well averaging close to 51 FPS but still trails behind the 5870 and 560. 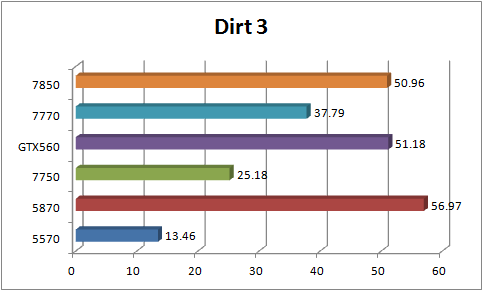 The infamous Crytek engine still punishes video cards to this day. Most of these cards struggled. This benchmark was run under the Very High setting which is not recommended; the GTX560 and HD 5870 tied at 29FPS. The 7850 beat them with an average of 33FPS, which is pretty playable given the punishment it's taking. 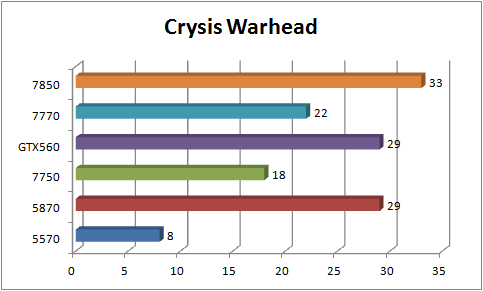 Street Fighter IV has a unique cell shaded, comic book style look to it. Most of the cards did well and the HD 7850 rules them all with 155FPS. The moves go by so fast in benchmark mode, but with the HD 5570, you can see every move done at a realistic speed. It was the only card to get a D rating. The 7850 was noticeably the fastest of the bunch; it was hard to see the attacks being made! 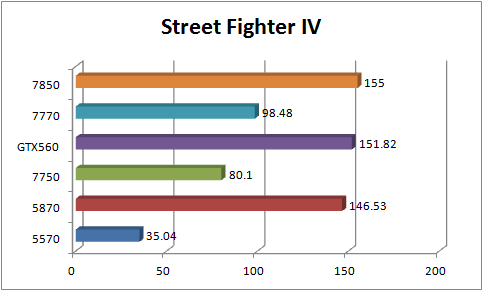 The HIS HD 7850 is a solid gaming card that will satisfy many gamers.  It can hold its own on resource intensive games such as Crysis, Skyrim, and Battlefield 3. Its strength lies in its new architecture, with its improved processing power and multimedia features. The improved processing power was really evident in the Heaven benchmark with its heavy tessellation. I was very impressed that it did better than the power hungry 5870 in this area.  The 7850 only requires one power connection versus my 5870's two.  I'm officially retiring my HIS 1GB HD5870 and moving onto this HIS 2GB HD7850. The HDMI 1.4a feature that this card supports includes not only 4k video output, but stereoscopic 3D. It even supports up to six displays!  With a price tag of less than $250, this is a great card for budget gamers that don't like shelling out $300 or more for graphics cards.