HIS is a graphics card company that primarily builds ATI-based products. They are a Christian company as well. This is part of their company statement: HIS was established in 1987 with the mission to produce the highest quality graphic cards in the industry. Besides strong devotion to excellent products and services, HIS has been conducting business with the aim to "Glorifying God". Honesty and integrity are the two key principals of how HIS are conducted. Ethical business practice has been an everyday commitment to our clients, vendors, and investors. Most of us pick a video card based purely on chipset and price. It's good to see HIS is more than a typical ATI card manufacturer - they have a mission that CCGR can agree with. Even so, this review is based on the quality of the product reviewed; no unnecessary bias has gone into the review process. HIS HD2600Pro IceQ Turbo 512MB PCIe The HIS HD2600Pro IceQ is HIS & ATI's answer to the low to mid-range market. With a price tag of $150 or less you can get a lot of card for your money. The video card also claims a noise level of less than or equal to 20 decibels, which is fairly quiet.

· HDTV/TV out, built in HDMI with a bundled in DVI-HDI adapter

· Dual-DVI support (needed to support super-high resolution displays) Of particular note is the Dual-DVI, which allows you to use those nice 30" displays, and the very high GPU and Mem clock. Keep in mind that the GDDR 2 with a128-bit bus limits the memory.

Since the ATI 2600Pros sell for close to $100 I figured I’d compare it to some cards we’ve reviewed in that past that sell for $100 or less on newegg.com.

For our PCI-Express reviews, we have a fairly high-end system available. It should make fairly clear where the GPU limitations are, since we are not CPU bound here. · AMD Athlon 64 X2 4200+ CPU (2.2GHz) · ASUS K8N-SLI Deluxe Motherboard, using the NVIDIA NForce 4 SLI Chipset · 2GB of DDR400 RAM, Dual-Channel, CAS 2.5 · 120GB Seagate 7200RPM Hard Drive with 8MB Cache · SB Audigy 4 · Onboard Nvidia ethernet · Windows XP Pro Windows XP was installed with Service Pack 2 slipstreamed in. No other Microsoft updates were installed. There was no anti-virus software or anything of that nature installed. The driver versions were as follows: · NVIDIA NForce 4 AMD Edition drivers, ver. 6.70 · For the ATI cards: Catalyst 6.10 with exception to the 2600Pro requiring 7.6 For the NVIDIA 6600/6800GS: ForceWare 84.43 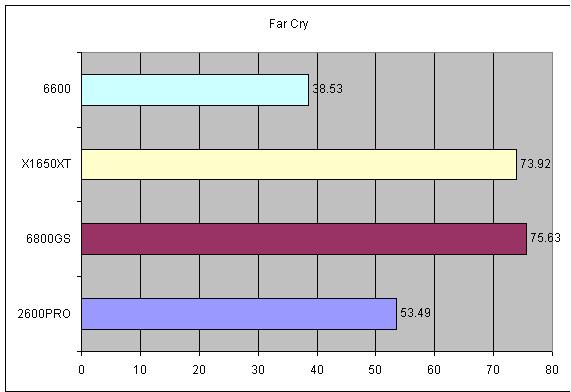 As you can see the HD2600Pro suffers from the lower speed memory and bus here. Regardless it is still playable with a little over 50FPS. 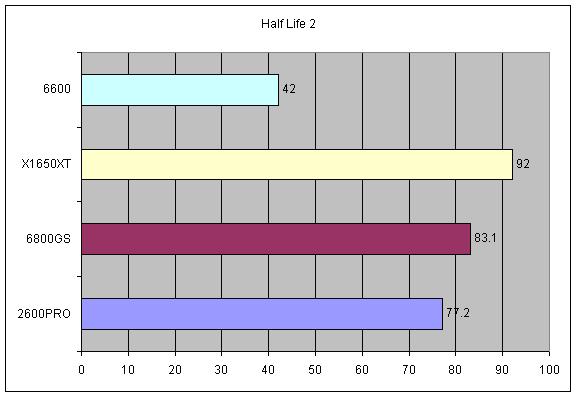 ATI is favored card by the Half-Life 2 engine and the HD2600Pro has a respectable frame rate here. 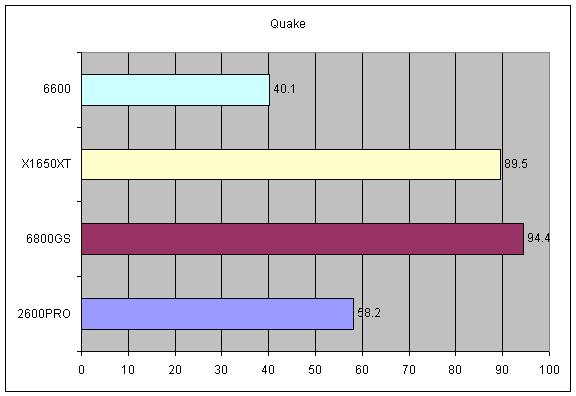 The Quake 4 engine wallops the ATI’s. Nvidia is clearly preferred for this game. At almost 60FPS, the HD2600Pro is playable. 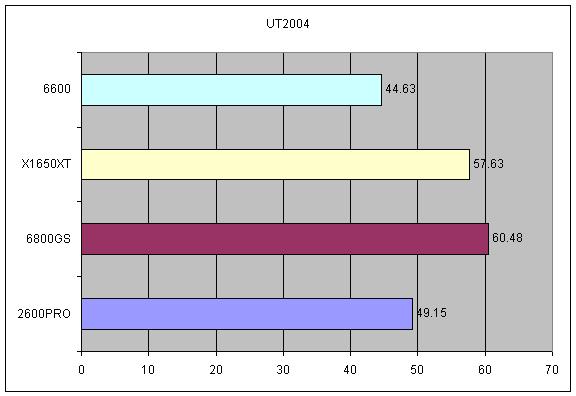 In this game the HD2600Pro barely beats the Nvidia 6600, which has been the last placeholder all along.

The HD2600Pro offers decent gaming performance but it’s more geared for a multimedia audience with the HDMI/1080p/Blue-Ray support etc. This card is Vista ready with DirectX 10 support. The other cards we compared it against do not support DirectX 10. If you’re just looking for a good gaming card for $100 or less, there are better options based on what games you plan on playing. Steam currently is offering Half-Life 2 Deathmatch and Lost Coast (technology demo) free to ATI Radeon owners.