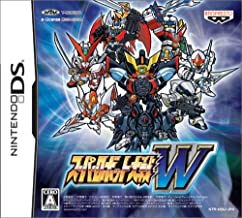 Note: This Nintendo DS game requires importing it from Japan and applying a fanmade English patch via legally dumping the original ROM and playing via emulator or on real hardware via flash cart. The review will be based on this. Game screenshots were taken in the Desmune emulator and will be shown horizontally, with the left showing the top screen, the right the bottom.

I would like to thank Brunom1, one of the English patch developers, for vital help with translation information and notes on bugs in the game engine.


Some game creators make a game and realize they could have done a lot better, so they make another game to make up for their poor efforts prior. Super Robot Wars W (the W standing for Double, like the NDS screens) was the game that succeeded Super Robot Wars J, which has some good ideas but a lot of flaws. SRW W polishes up what SRW J did right, and does a lot more good on its own merits.

The following series are depicted, in whole or in part:

Super Robot Wars W starts with a family of Trailers called the Ardygun Family, essentially space mercenaries who get involved in the unfolding chaos of the solar system in the first part of the game, trying to keep a handle on it. They do so under the banner of Warter, an organization under the control of the United Nations Secretariat. However, the first part of the game ends in tragedy due to interference from the UN Security Council, rivals of the Secretariat. The second part of the game picks up as Warter reforms, this time hoping to set right what went wrong before. In the meantime, they also have to deal with an even larger threat to all sentient life that has a very personal connection to the Ardyguns.

Strong Points: Good use of licensed series; excellent graphics and music
Weak Points: One of the songs is an obvious ripoff from Warcraft 2
Moral Warnings: RPG styled violence; every PG-13 profanity can be seen at one point or another; a few minor sexual jokes are made; depiction of souls persisting after death; mentions of racism

This game, while reusing many series and even some plot elements from the previous Super Robot Wars J, does a few entirely original things. It debuts both Tekkaman Blade II and Detonator Orgun, the former a sequel to the original Tekkaman Blade and the latter based on unused designs for Blade, with both rewritten to tie into the original Tekkaman Blade more directly. Getter Robo is adapted, though with the Getter Robo G cast piloting the Getter Robo Armageddon Shin Getter, which is curiously credited as being from the Shin Getter Robo Manga despite using no story from it. Full Metal Panic returns, this time also adapting the second anime series as well as the first, though both use the light novel canon over the anime. What the West knows as Voltron had its Japanese source Golion adapted, though aside from the original Japanese names it has a mostly original new plot in this game. Finally, Gundam SEED returns, though they focus more on the side story material from the SEED Astray manga and make major changes to the original SEED plot.

Like all games in the series, Super Robot Wars W is a turn-based strategy game on maps seen from a top-down, 2D perspective. You must move your characters across the grid-based maps like chess pieces against enemies, during which animated attack sequences will play. In between levels are visual novel-styled story scenes and an intermission that allows upgrading units and characters.

Graphically, this game is very beautiful. While it does reuse a lot of assets from Super Robot Wars J, they have all been retouched for higher quality and smoother frames of animation. The new assets look just as stunning, and both new and reused assets have a vibrant and dynamic feel. Unlike SRW J, which had some story scenes as stills, this game allows for several scenes to have some degree of animation to further maintain fidelity to the shows they were adapted from.

The music and sound effects once again reuse assets from Super Robot Wars J, but the high sound quality of the Nintendo DS was used to resample those assets to be much more clear and at higher sample rates. The new music and sound effects are also of high quality, many being console-level quality. One thing that is worth noting is one of the original songs is apparent plagiarism of the "Orc 2" theme from Warcraft II (Blizzard has never legally commented on this), and given the music director was finally kicked out for ripping off even more music in the successor game K, it's something to keep in mind.

Control is much like SRW J in using the directional pad and keys, but the NDS stylus controls can also be utilized, though aside from a few menus I found this to be less helpful than the keys and buttons. In terms of stability, it inherits all the better aspects of the SRW J engine, though the more powerful hardware of the Nintendo DS was used to smooth out any framerate issues and make the already good load times even more seamless.

Stability is quite good. Since it's based on an improved version of the Super Robot Wars J engine combined with the increased power and fidelity of the Nintendo DS, load times are quick, there are no issues during most normal play sessions, and it works well both with and without the English patch.

According to Brunom1, the English patch developer, the following issues were present in the original game and were not fixed by the patch (somewhat edited from the original for clarification):

"W doesn't have any bugs that cause hard crashes. It has the size modifier bug (a beneficial bug where small units on the player side do not suffer damage penalties against larger ones), a bug that can soft lock you on mission 53 if you trigger the plot without downing enough mooks, and a very specific background corruption that is merely visually annoying that crops up if you use the Astray Blue Second G's beam rifle attack against a white background (i.e. missions 47 and 55)"

As for the patch itself, the developers of the patch opted for accuracy and ease of reading. That means they went for making it as easy for English native speakers to read and did not change any parts of the script unless required to convert cultural jokes and references to be more accessible to English audiences. Official English dubs of any series included were generally disregarded if they had clear inaccuracies of plot importance (a Cantonese character from Full Metal Panic had their name corrected over the official English localization of the anime name to preserve a plot point for example).

From a moral standpoint, this game has some issues.

Violence is of the RPG variety, where orders are given and you watch the result. Remains disappear immediately and violence takes place strictly between piloted robots and alien monsters.

Language is generally around PG-13 level (like s**t, b***h, a**, etc), as it's got a few foul-mouthed characters who rattle off about every profanity in the book. There is a sequence that parodies R.Lee Ermey's infamous profane rants in Full Metal Jacket that does censor the swears, though the context is obvious for those who get the joke. Otherwise, it generally stays out of the gutter.

Sexual content is fairly low. A few references are made by a villain or two to homosexuality, though this is to show they are a depraved villain. In another instance, it's brought up as the setup to a lighthearted joke but is not endorsed specifically at any point. There is one character from Tekkaman Blade who the Japanese script indicated was a crossdressing male, though the American version made them female. While the translation is generally accurate to the Japanese dub, the game follows the American translation in regarding the character as female, though for the sake of humor references are made to them possibly being male a few times.

The occult and supernatural have a fairly low presence for the most part, aside from a minor plot point or two from GaoGaiGar that references souls remaining after death via some unexplained means. Otherwise, God is positively remarked on several times throughout the story.

Morally and ethically, your characters are generally a mix of military and civilians who work as part of a lawfully recognized force that is deputized to preserve the peace. There is some legal friction with the legitimate military and other powers, though your team takes every reasonable effort to resolve it without bloodshed where possible. There are a few mentions of racism, mostly of the fantastical sort, though it is roundly condemned as abhorrent.

It's worth noting the game has a strong theme around family ties. Those who are related by blood or otherwise are often shown to be stronger for their devotion to their kin, and it's interwoven into the plot as an omnipresent theme.

Overall, Super Robot Wars W is an amazing game that I cannot recommend highly enough, having been one of the best standalone handheld titles of the franchise for nearly two decades now. Morally it has some issues, but should be easily handled by any older teen and up.