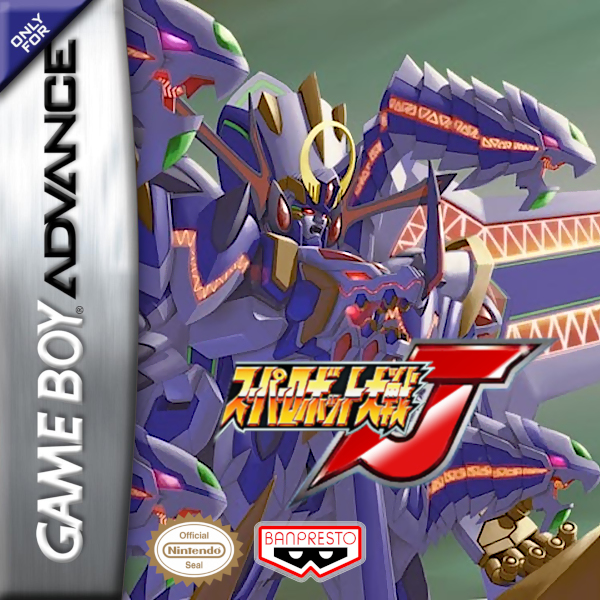 Note: This is a Japanese game that must be translated to English with a fan patch. It should be legally purchased and the GBA ROM dumped to a flash cart or via a PC to be emulated after the application of the patch. CCG does not endorse any other methods as we do not wish to encourage piracy.

Towards the latter end of the life of the Game Boy Advance, the creators of the Super Robot Wars series made Super Robot Wars J, one of the best-looking and technically advanced games for that platform. Thanks to the work of fans, it can be enjoyed in English in its entirety, and despite some technical and narrative issues, is an excellent title.

The following series are included, in whole or in part:

Super Robot Wars J (for "Judgment") is a turn-based strategy, standalone title in the SRW franchise. The story is that Earth, despite attempts to move beyond its planet and colonize Mars, has been besieged by all sorts of threats. Closer to home are all sorts of wars between Earth and its space colonies over energy and other issues. From the perspective of either protagonist Touya Shuin or Calvina Coulange, you will be drawn into this conflict, assembling a collection of the mightiest warriors of the solar system to not only defend it from all known threats but to stop a force behind them all that had decided humanity (in their judgment) deserves destruction.

Like many games in the series, it has a lot of innovative crossover series additions and changes. It is the first game to not include a Getter Robo franchise entry. It is also the first game to use a non-UC Gundam series entry, namely Gundam SEED. Finally, it introduces powered armor heroes, specifically the Tekkaman Blade series, being the first game to seriously stretch the definition of "robot". From a gameplay standpoint, it brings back the Favorite Series mechanic from Super Robot Wars MX, allowing three series to be chosen instead of just one to receive extra upgrades. In a technical sense, it also has some of the best music and animation ever seen on the GBA. 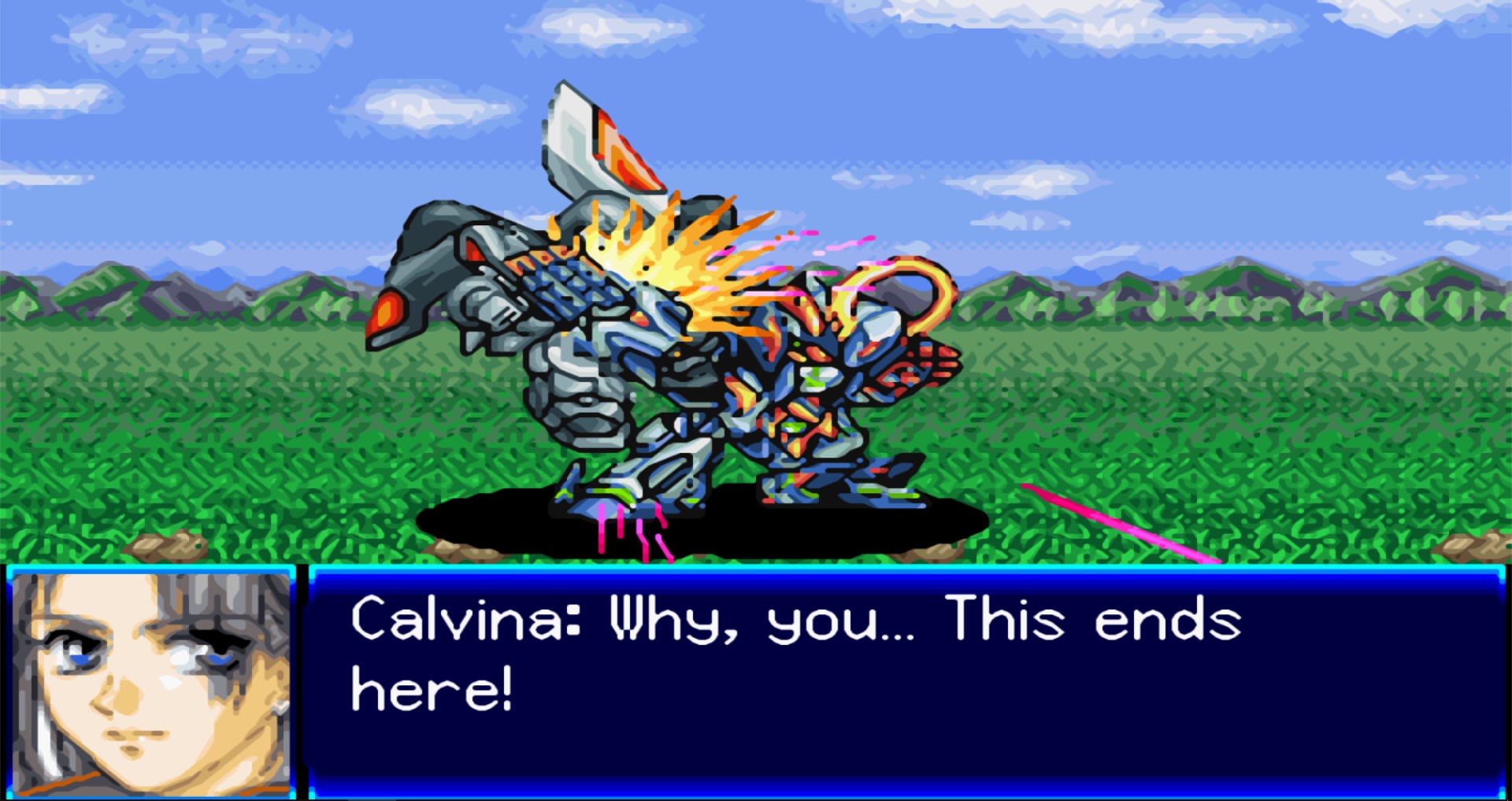 The gameplay follows the tradition of the previous GBA titles. Its levels take place on a 2D top-down grid in which units are moved like chess pieces against others, and animated combat sequences based on the licensed properties the units are derived from play. Inbetween each are visual novel-style sequences that elaborate the game story and provide chances to upgrade units and characters. Some story sequences provide alternate game routes focusing on certain series, which can allow certain secret units and characters to be unlocked. Inbetween levels is also a minigame/tutorial called "Puzzle Robo", which teaches various game mechanics and rewards the player with parts and money for completing the puzzle sequences.

Graphically, this game pushes the GBA to its limits. Not only does it have some of the best-looking graphics of any SRW game on the GBA, but the animations are also so well done they were ported over with only minor changes to the immediate successor title due to their already high quality. The music and sound also push the GBA to its technical limits, and both the anime music instrumentals and sound effects are quite accurate to their sources insofar as the GBA was able to render them.

The game is controlled by the directional pad and buttons and is very simple to figure out. SRW J is very stable on real hardware and emulation, though it does have some minor bugs. Many tend to be good and serve as exploits in the player's favor, though there are some minor ones, like the shield defense mechanic being broken and a few glitches with certain secret units not getting proper upgrades.

Without spoilers, some issues with the game narrative are obvious. G Gundam was very poorly grafted onto the game plot, with plot holes even a casual fan would notice. Gundam SEED is played utterly straight, with hardly any changes to any of the worse writing decisions, and nigh anyone who died in canon still dies with no changes. The Mazinkaiser Movie is so poorly utilized it's entirely possible to miss nigh all of its content depending on what route choices you make. Of the two protagonists you can pick, the female one is the better written of the two, with the male having some skimpy plot development by contrast. 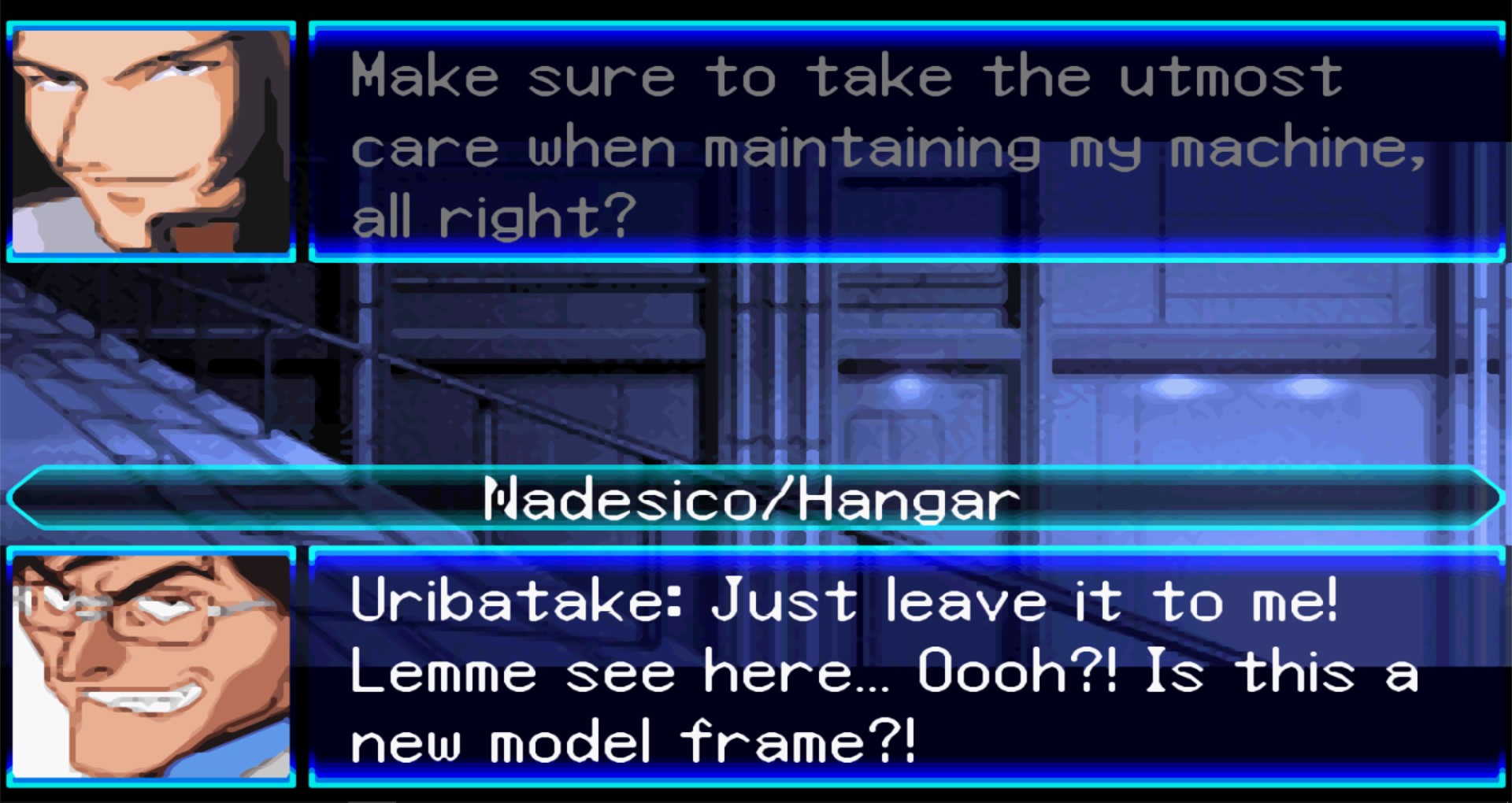 In gameplay terms, some issues are also apparent with game balance. Bigger, tankier robots and carriers are favored over smaller ones for enemy targeting, and the game AI has enemy reinforcements appear in huge, lemming-like waves. A lot of maps are huge and there are a lot of water maps, which is tedious for units that cannot fly to move in. While the game tends towards being somewhat easy regardless, the above is omnipresent.

Morally, this game has some issues.

Violence is of the RPG style variety, against aliens and robots. There is no blood or gore detected, and remains disappear after death. Your forces act either in concert with lawful military oversight or otherwise seek to uphold the peace and defend innocent lives.

Language is of the mild PG-13 variety, with some d**m, h**l, and b**t**d usage on occasion. There is some sexual dialogue, including some implications of an out-of-wedlock affair (nothing graphic, but it's obvious two characters are sleeping together). There are a few pilot cut-in sequences where female characters in form-fitting outfits show off some "jiggle physics", but that's about it.

This game leans very hard into science-fiction, with very few if any supernatural elements. The Mazinkaiser series does reference God and the Devil, as it has a recurrent theme of one acting like the former (good) or later (evil), but otherwise, this remains generally free of religious or mythical references.

On the ethical side of things, your forces consist of a mix of military personnel and civilians. In all cases where orders are lawful, your team abides by proper authority, only acting on their own when orders are unlawful or such is required to save and defend innocent lives. There are frequent mentions of racism, as it was a key element of the Voltes, Lazyner, and Gundam SEED storylines. In all cases, it's shown to be wrong, but it's still a prevalent element.