Mario & Luigi: Bowser\'s Inside Story is the third entry in the Mario and Luigi Series following Super Star Saga and Partners In Time. In this game you get to play as Mario, Luigi and Bowser. The story begins with many toads in mushroom kingdom becoming obese after eating a strange mushroom. This sickness is called "The Blorbs". The Princess and Starlow ask for Mario and Luigi\'s help in finding a cure. Their meeting at the town hall is quickly interrupted by Bowser who is upset because he was not invited to the summit. Bowser too has eaten a strange mushroom and uses his ability to vacuum suck everyone in Princess Peach\'s castle into his belly. Hence the title Bowser\'s Inside Story.

Fawful returns in this game and is behind the mysterious mushrooms. His funny attempts at english return with quotes like this "Beef? I am lacking in beef. Fawful is beefless." He wants to rule the world and wants to awaken the dark star to give him the power to do so. Fawful will need Princess Peach to restore the dark star\'s power. It\'s up to Mario and Luigi to locate Princess Peach inside of Bowser and to keep her safe. In order to stop the dark star, three star fragments have to be acquired from sages around mushroom kingdom. Bowser and the Mario Brothers are both after these pieces and they will be working together for them. Bowser is not aware that his arch enemies are inside of him keeping him alive and restoring his powers. 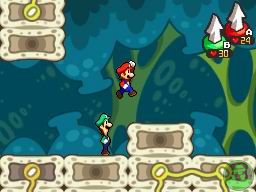 When you play as Bowser you\'ll only have the ability to punch things. Later in the game you\'ll get your fire breathing restored and learn how to do a shell stomp or roll around like a spiky ball. Many areas in the map are only accessible by using these skills. For example you\'ll have to smash boulders and burn down trees to expose new paths to travel on. As Bowser explores, he\'ll find some of his minions trapped in cages, if he rescues them, they will give him a new attack move. You can press select at any time to bring up a map which will show you were the store kiosks and save blocks are. Bowser and the Mario Brothers have to shop at different stores when it comes to healing items and gear to wear. The Block guy who runs the store that Bowser shops at can\'t stand Mario and Luigi for all of the cruel hitting they do to blocks they encounter. The Mario brothers start off with basic hammer and jump attacks. Later they will acquire the ability to hammer each other to make themselves smaller and the ability to tunnel underground. As they explore they will encounter puzzle pieces, and by collecting all ten pieces they will learn a special attack move. These attacks are very powerful but often challenging to complete perfectly. Fortunately you can practice the moves anytime in the menu if you need a refresher. Many of the same moves are back including the koopa shell and fire flower attacks. Most of the moves are original and are very powerful and worth your time to learn how to execute them perfectly. To use the moves you have you must have enough Special Power points. These points, including Bowser\'s, can be restored by drinking syrup. 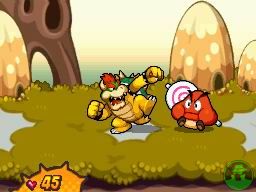 There are various attributes in this game. They go up with every level you raise and there is an option to randomly increase one attribute per level. The attributes are:

Be sure to visit the stores in towns. You can stock up on mushrooms (hot wings for Bowser) to replenish health, syrup for SP, herbs to cure poison, and nuts that allow you to heal both brothers at once. There are also stores that carry badges and gear to boost up some stats. The brothers can wear trousers, socks and gloves that grant them special abilities like increased health, power, defense or the ability to revive automatically. Bowser can equip a shell, fangs, and rings that grant him similar abilities. As you level you\'ll gain rank and some stores will only sell to you if you have a high rank. There are many mini games that can help you gain rare and unique items. For example Bowser can collect Blitties (Block kitties) for the store owner and if he gets all eighteen of them, Bowser will get to use his dog for a special attack (very powerful!). The Mario brothers can search for sixteen hidden mushrooms for a similar reward. Some challenges require you to hit targets repeatedly a couple hundred times to earn a reward. For example, there are some gauntlet challenges for the Brothers inside of Bowser, and Bowser can help give a French block lady a massage.
When you beat the game, harder bosses are unlocked with a limited number of turns allowed to defeat them. I beat the game in thirty hours and I didn\'t acquire everything. There\'s a lot of game play here if you want to collect every bean, quest item and complete every challenge. The beans in this game allow you to raise one attribute by a point. So make sure you dig out all of the beans where you see X\'s on the ground! 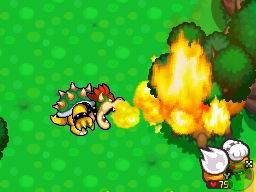 Since this is a Mario game you have some classic Mario enemies like koopas and bob-bombs. Many of the enemies are original and many are body themed since the Mario brothers are inside of Bowser. You\'ll be fighting his cells and using his globin for save blocks. Bowser will be fighting various mean plants and when he sucks up enemies with his vacuum power Mario and Luigi can battle them from Bowser\'s belly. The experience is all divvied up evenly.

This is my favorite in the series so far. It has a great balance of RPG elements and character development as well and some classic Super Mario jumps and jumping puzzles. Although I\'m not a fan of time attack puzzles the ones in this game are not that bad. My only complaint is that the last boss battle is a bit boring as not too many new attacks are introduced and you can only tell you\'re getting to the end by the enemy doing multiple attacks in one turn.

The controls are unique and utilize the DS\'s features nicely. For example the Brothers have to save Bowser\'s life many times by stimulating his adrenaline. When this happens, Bowser gets King Kong huge and you have to rotate your DS and control Bowser in a whole new way. One of the attacks is to breathe fire and to do that, you have to blow into the microphone. Many of the punching and special attacks require using the stylus to execute them.

The graphics are unique and colorful. Bowser has a lot of convenient ledges inside of him. The maps and characters have good detail and the enemies all have their unique looks. The characters show emotion in this game; you can tell when Luigi gets scared as he shakes and holds down his hat to cover his eyes. I hate to say it but you even get attached to Bowser by playing as him.

The sound in this game is great, there are some classic Super Mario tunes that make an appearance. The boss battle music is great too. Each enemy has their own unique sounds. There are mini voice clips for Mario, Luigi, Bowser, Fawful, and Princess Peach.

Other than the typical jumping and hammering enemies this game is pretty clean. There are some ghosts (boos) and some magician Koopas but no magic is used by Mario and Luigi.

I thoroughly enjoyed this game. There\'s lots of originality and game play here. If you own a DS and like RPG and Mario games, look no further then Bowser\'s Inside Story.