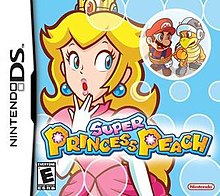 Bowser has finally caught Mario and Luigi by using the powerful Vibe wand. It’s now up to Princess Peach to rescue them. Equipped with a magical umbrella and the power of her emotions, she can take down any foe that crosses her path. Go girl power! This is a girl-friendly Mario style game with pastel colors, microphone and stylus use, and easier game play. Just because it’s easier, doesn’t make it any less fun. The stylus and microphone are both used in this game.

Like many Mario titles this is a single player 2D side scrolling style game. The typical moves apply in defeating the various koopas, goombas, flowers, jumping fish, and so on. You can jump on them (if they don’t have spikes) and you can pick them up and throw them too. Other than the bosses, I don\'t think there are any new enemies. Your umbrella allows you to whack enemies, glide in the air, and stomp through bricks. The emotions you can use include:

Joy: Princess Peach becomes very happy and twirls in the air. This can be used to fly, spin wind mills, and blow away smoke and clouds.

Rage: This power makes Princess Peach angry and surrounds her with fire. With this power you can burn away wood bridges, melt ice, light lanterns, and best of all, make her invincible.

Calm: This emotion calms Princess Peach and lets her heal as long as nothing harms her in the process.

There are eight worlds with six levels and a boss at the end of each level. The levels have plenty of variety and there are different puzzles and mazes to figure out. Some of the levels are time attack so you have to move fast. The lower half of the screen will show an exclamation mark if there is a hidden object nearby. Some of the levels take you to the sky, under water, and of course there are lots of pipes to travel through. Hidden in each level are three toads that you need to find and rescue. You can progress to the next stage without finding all of the toads but you have to have them all collected to battle the last boss, Bowser. There are also puzzle pieces and musical scores that you can find and collect as well. After you beat the game once, three more levels are added to each world. There is plenty of replay value given the add-ons for beating the game and mini games.

There are several mini games including a puzzle game that you can only play if you have collected all of the puzzle pieces. You have to use the stylus to move the pieces around and double tapping rotates them. Toad Jump is a cute game where you have to blow into the microphone to make the toad avoid the enemies coming towards him. Toad Tote requires you to drag a Toad around a maze and avoid obstacles like flame gates and mines. Lastly, Toad Shot is a mini game similar to skeet shooting where you have to tap the airborne targets for points. You have to accumulate a certain number of points in a short amount of time. There are bombs that can destroy many targets at once and there are targets that will subtract from your score so make sure you avoid those!

Graphically this game is colorful and very targeted toward females. I love the animations in the background and the artistic style is similar to the Partners in Time game except with prettier colors and a tad more detail. The top screen is the game/action screen and the lower screen is where you tap the hearts for what emotion to use. Sometimes both screens are used for game play. The worlds and enemies are nicely detailed and the bosses are huge and intimidating.

The background music is pleasant to listen to and there are a few recognizable riffs here and there. The sound effects are on par with the other Mario games out there. You’ll hear a few phrases from Princess Peach and limited enemy sound effects.

From an appropriateness standpoint, there is cartoon like violence. There are koopa skeletons and ghosts (boos) in some levels. Overall this game is pretty tame and safe for kids and adults to play.

Super Princess Peach is considered a cult classic and the price reflects that. It lists on Amazon for $90 brand new. If you can find it for a good price I highly recommend picking it up. I got my new copy at a closing Game Crazy store for $17. There is plenty of replay value and it’s nice to see the Princess whooping Bowser this time around.